​Since 1976, Japan’s defence budget has traditionally been capped at 1% of its GDP. However, in a recent interview, Japanese Defence Minister Nobuo Kishi said that this self-imposed limit would effectively be removed. 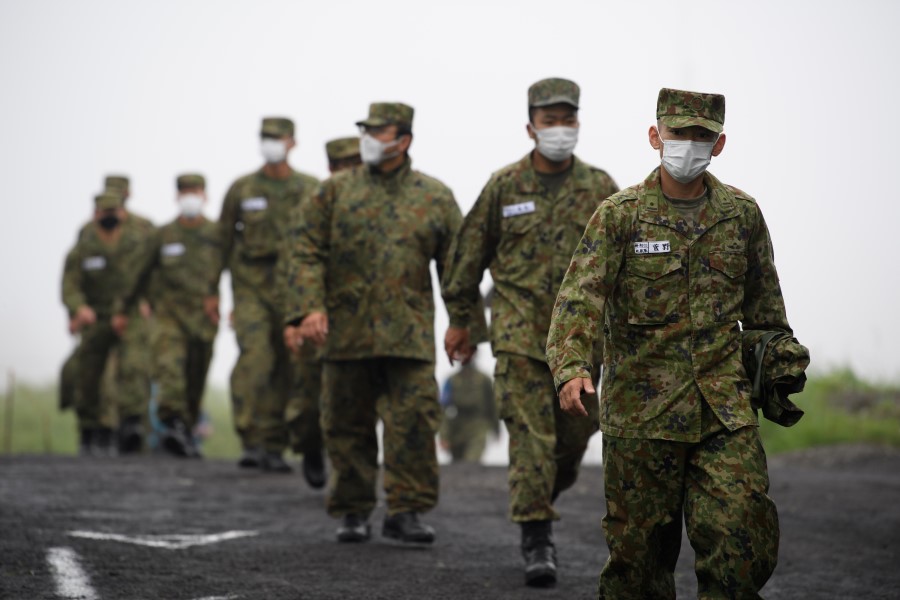 Japan's Ground Self-Defense Forces (JGSDF) soldiers wearing protective face masks arrive for a live fire exercise at JGSDF's training grounds in the East Fuji Maneuver Area in Gotemba, Japan, on 22 May 2021. A key part of US President Joe Bidens foreign policy has been turning to allies for support in addressing the security risks posed by the likes of China and North Korea, placing a greater emphasis on the Indo-Pacific region. (Akio Kon/Bloomberg)

Candice Chan - 30 November 2022
An incident involving errors with Covid test results at a test facility in Lanzhou has opened the doors to deeper digging by netizens, indicating a pattern of outbreaks wherever there are facilities established under the Shenzhen Nucleus Gene Technology Co. Coincidence, or something else?
Read more
Translated by Candice Chan on 2 June 2021

In a recent interview, Japanese Defence Minister Nobuo Kishi said Japan’s defence budget should not be capped at 1% of GDP, which is an important statement.

Since the Takeo Miki administration decided in 1976 that the defence budget would not exceed 1% of GDP, the various Japanese cabinets have stuck to that, except in 1987 and 1989, and also in 2010 when the GDP shrank. And even when the Yasuhiro Nakasone administration exceeded the budget, it said it respected the spirit of the 1% ceiling.

Over the past 40 years, capping the defence budget at 1% of GDP was a self-imposed limit for Japan, a way to demonstrate to the world that it was on the path of peace. Japan’s “low military budget” is good for its own economic growth, and has become a sign of its post-war pacifism.

So, why remove the cap? Kishi said Japan’s security environment has changed — China’s increased capabilities has upset the regional military balance, and there is a need to increase Japan’s defence capabilities. This is the “China threat” theory, and it is not new. And based on this line, Japan is abandoning its post-war pacifism; from the time of the Shinzo Abe administration, it started shifting its national strategy towards “active pacifism”.

Some Japanese saw post-war pacifism as being too US-dependent and passive and felt that Japan had to shift towards active pacifism, to protect its own security through active diplomacy and security strategies. At the same time, Japan should strengthen multilateral alliances built on the Japan-US alliance, to restructure the international order. Japan’s security strategy has already shifted under the strategy of active pacifism, and it would definitely request a higher defence budget.

Scrapping the cap on the defence budget suggests that Japan will expand its military spending and boost its military capabilities. The defence budget under the Abe administration grew for eight years in a row, and the Yoshihide Suga government inherited his predecessor’s strategy of strengthening the military. In the 2021 budget, military spending has been increased by 3.3% over last year, making it the sixth year where spending has exceeded five trillion yen.

Removing the cap shows that Japan is moving in line with the US’s Indo-Pacific strategy and taking on more responsibility in terms of security.

Removing the cap shows that Japan is moving in line with the US’s Indo-Pacific strategy and taking on more responsibility in terms of security. Japan and the US have reached a consensus on building a free and open Indian Ocean and Pacific Ocean. The Japan-US Joint Leaders’ Statement on Suga’s visit to the US committed to increasing defence capabilities, as well as strengthening alliances and regional security.

Scrapping the cap will usher Japan into a new phase in security strategy. Former assistant chief cabinet secretary Nobukatsu Kanehara said the Miki administration’s decision to impose the cap was in line with the basic defence capabilities concept as established in the first defence blueprint, which was not to provoke the Soviet threat and opposition against it. And now, to resist China, Japan has to increase its basic defence capabilities.

Kishi said Japan has to strengthen its defence capabilities at a very different speed from before, showing that Japan’s security strategy towards China is completely different from its Cold War strategy towards the Soviet Union, which in turn shows that Japan’s post-war pacifism has been replaced by active pacifism. The defence budget exceeding 1% of GDP is a turning point signalling a new phase in Japan’s security strategy since the Abe administration.

Japan’s 2018 defence blueprint said that defence means being able to respond actively and strategically in various situations, as well as being able to create a safe environment and contain threats. Japan stresses deterrence and containment, to give opponents ample understanding of the price of action, so that they do not act.

Kishi said currently there are no plans to intervene in the Taiwan Strait, but he did not rule out the possibility of adjusting policy according to changing circumstances and changing the approach to Japan-US defence cooperation.

Second, crisis intervention and combat capabilities. The Japan-US joint statement mentioned the Taiwan issue, and Kishi said currently there are no plans to intervene in the Taiwan Strait, but he did not rule out the possibility of adjusting policy according to changing circumstances and changing the approach to Japan-US defence cooperation. According to the Treaty of Mutual Cooperation and Security between the United States and Japan, or Anpo, Japan is obligated to move in tandem with US military manoeuvres. Also, Japan has lifted the ban on collective self-defence.

Third, maritime security capabilities. Japan participates in and leads the Quad security arrangement — the other members are the US, Australia, and India — and other multilateral military cooperatives, and frequently holds multilateral military exercises in the East Sea, South China Sea, and the Indian Ocean.

Japan’s military strength is going beyond the scope of domestic defence. So, scrapping the cap on the defence budget shows a continued deepening of changes to its security strategy, which is a definite consequence of the shift in national strategy towards active pacifism.

Related: US academic: Is Japan a true and loyal US ally? | Chinese academic: Japan is the ‘hidden warrior’ behind China-US competition | Japanese academic: Has Japan 'crossed the Rubicon' in Japan-China relations?