Why rumours spread faster than outbreaks in Shanghai

A recent false rumour of an impending lockdown in Shanghai led to panic buying and disorder not usually seen in Shanghai, a well-run city that follows the rules. But it is not so much that people can’t tell fact from fiction, but that recent U-turns by the officials have led people to start relying on the grapevine. What should the authorities do to win back the people’s trust? 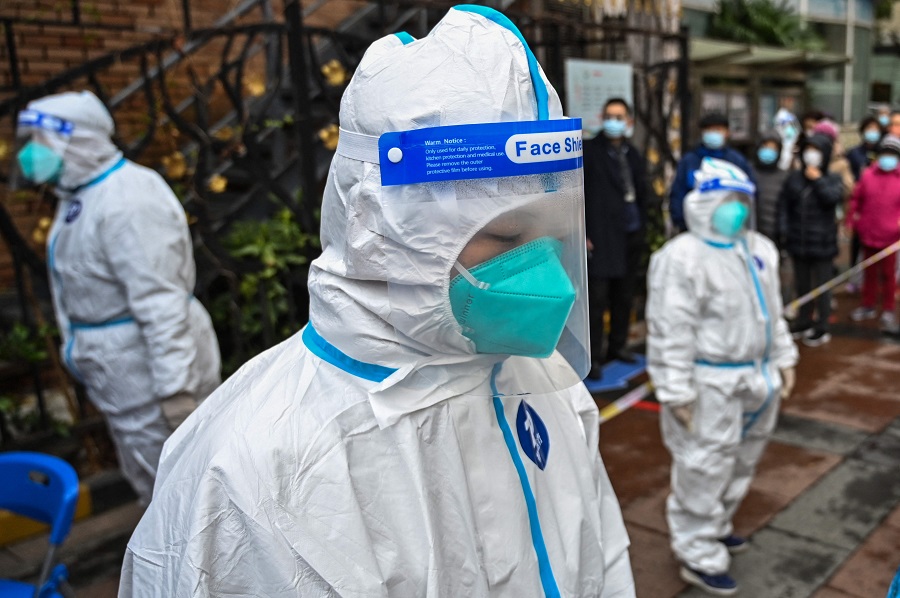 Workers wearing protective gear look on as people wait to be tested for the Covid-19 coronavirus at a residential compound in Shanghai, China, on 18 March 2022. (Hector Retamal/AFP)

Grace Chong - 5 August 2022
In life as in death, food brings people together and is a means to commune with one another, as seen in rituals during the seventh lunar month or Hungry Ghost Festival. Perhaps in feeding the spirits of the dearly departed, the unknown and indeed their own, people are reminded that an ending is not the end and that the bond between the living and dead is never broken.
Read more
Translated by Grace Chong on 24 March 2022

The Shanghai authorities have their hands full these days, both with containing the pandemic and refuting rumours.

In the past month of Shanghai’s latest wave of Covid-19 infections, rumours have been rampant and it’s getting harder to tell what’s true or false. In the last three days alone, officials have refuted two rumours: one that there are over 8,000 new Covid-19 cases in Pudong New Area’s Beicaizhen (北蔡镇), and two that Shanghai is going to be locked down for seven days.

Both of these rumours appeared in my WeChat group chats. The first one was easily dismissed since the “8000” figure is just too exaggerated. The second one about the lockdown, however, was taken to be true by many of my friends. This is because it seemed logical and was supported by “red-headed documents” (红头文件, official documents with the name of the issuing government agency printed in red at the top).

The lockdown rumour originated from a screenshot of a WeChat chat record stating that the State Council’s inspection team was in Shanghai and would soon be calling the current outbreak “uncontrollable”. An individual in the chat analysed that experts are not ordinarily deployed to Shanghai to assist with anti-epidemic efforts. But due to “social spillover effects and anti-epidemic measures being inadequate”, there would be a need to impose a seven-day lockdown to achieve zero-Covid.

The individual also urged his friend to quickly stock up on food items with a long shelf life because “action would be taken in the next few days”.

That very night, Shanghai state media clarified that rumours of a lockdown were false. It stressed that the central government had deployed inspection teams to ten provincial-level areas across the country including Shanghai. They urged residents not to listen to the rumours or rush to stockpile daily necessities.

Rumours can be as lethal as the virus itself

But another chat record was then circulated in the group chat stating that the leaders of Shanghai held an online meeting at which it was decided that a four-day lockdown and mass testing exercise would be conducted, and that “the medical teams are all prepared and ready to go”. Not only that, a red-headed document attributed to the medical team of the Shanghai anti-epidemic prevention and control leading group was attached. The document mentioned the establishment of a centralised isolation facility medical team.

With the rumour seeming to be backed up by this document, even officials’ refutations could not dispel the public’s doubts. Long lines formed outside numerous supermarkets and markets in Shanghai overnight, and many of my friends started thinking of ways of getting more food supplies. After all, “what if it is true?”

Wu Jinglei, director of Shanghai’s health commission, again clarified at a news conference on 23 March that several streets and residential compounds have been unsealed after nucleic acid testing, and warned people against “maliciously spreading rumours that cause panic in society”, adding that those who did so would “bear legal responsibility”.

Amid Shanghai’s record-high Covid-19 infections and strained resources, rumours can have as bad an impact on society as the pandemic itself. Worried about an impending lockdown, Shanghai residents rushed to stockpile daily necessities.

The local police immediately launched investigations into the two alleged perpetrators of the lockdown rumours, asserting that they had fabricated lockdown information and caused widespread panic in society to “attract attention”.

Amid Shanghai’s record-high Covid-19 infections and strained resources, rumours can have as bad an impact on society as the pandemic itself. Worried about an impending lockdown, Shanghai residents rushed to stockpile daily necessities. Online delivery platforms even crashed at one point, resulting in goods not being delivered to those who truly needed them urgently. Long queues at physical stores also increased the risk of cluster infections and exacerbated the already serious outbreak.

While punishing the rumour-mongers, the authorities should also think about why rumours are so easily spread. If many members of the public would rather believe rumours than the official narrative, is that only because they lack discernment?

In the early stages of the outbreak in Shanghai, people believed official information. But some “rumours” turned out to be true, which weakened the credibility of official announcements. For example, in early March, there were online rumours that Shanghai would set up makeshift hospitals in Minhang district, but the authorities immediately denied it, and public discussion also faded. But yesterday, the authorities announced that Minhang Gymnasium has been converted into a quarantine facility for patients with mild symptoms. Even though it is not called a “makeshift hospital”, its basic function is the same, which led some netizens to marvel: “Rumours are really prophecies made way in advance.”

... contradictory pandemic policies make it more difficult for people to assess the accuracy of information.

Second, when the authorities are unable to deliver on commitments and the people suffer as a result of that, their trust in the government also goes down. Over the past week, as screening was implemented all over Shanghai, the official statement was that the lockdown would be lifted after two rounds of testing in 48 hours — in fact, most residential communities conducted round after round of testing for a lot longer than two days. Many residents ran short of food and drink, and medical attention was even delayed. After going through this pain, more people are shifting towards believing what they hear on the grapevine.

Also, contradictory pandemic policies make it more difficult for people to assess the accuracy of information. For instance, the government has emphasised the economic impact of the pandemic, but it has asked businesses to implement long-term shutdowns in line with pandemic efforts. The government has also said that those with mild symptoms can get free hospital treatment, yet it has implemented high-pressure lockdowns on residential communities with asymptomatic cases. In the face of such conflicting messages, even analysts would find it difficult to say whether the measures will be relaxed or tightened, not to mention the general public.

This is the challenge to China’s pandemic efforts due to the highly infectious Omicron variant, and the plight created by the authorities’ indecision between zero-Covid and living with the virus.

To be fair, the speed at which this wave hit gave the Shanghai officials little time to respond. Perhaps initially there were no plans to set up makeshift hospitals, but it had to be done due to the jump in cases, while the original timeline for lifting lockdowns was delayed because of too many people having to be screened. At its press conference, Shanghai officials responded to issues close to people’s hearts and apologised for shortcomings in their efforts. To some extent, this helped to quell speculation among the people.

However, when the pandemic policy does not reverse the trend of the outbreak, and the control measures keep getting stricter without a reasonable explanation, even Shanghai that is known for the quality of its government and the calibre of its people would face a crisis of confidence, providing room for rumours to spread. This is the challenge to China’s pandemic efforts due to the highly infectious Omicron variant, and the plight created by the authorities’ indecision between zero-Covid and living with the virus.

Under the impact of the fresh wave, the people of Shanghai and all over China are still highly compliant and tolerant of the official policies, but there are limits to such patience. Stopping rumours calls for a clearer and more transparent pandemic direction, and policies that are more convincing and considerate of the people.

Related: As the virus spreads, can China calm its people and contain the outbreaks? | Chaos in Xi’an: From zero-Covid to ‘zero cases in communities’ | Is China ready to live with the virus? | Lessons from Xi’an: Why there is no one-size-fits-all solution to Covid-19