Will China condemn Russia over reports of war crimes in Ukraine?

In the Ukraine conflict, China has stuck to its awkward stance of condemning the war but not the aggressor. As Europe loses patience and draws closer to the US, and international vitriol mounts hard and fast, will China be forced to change tack? 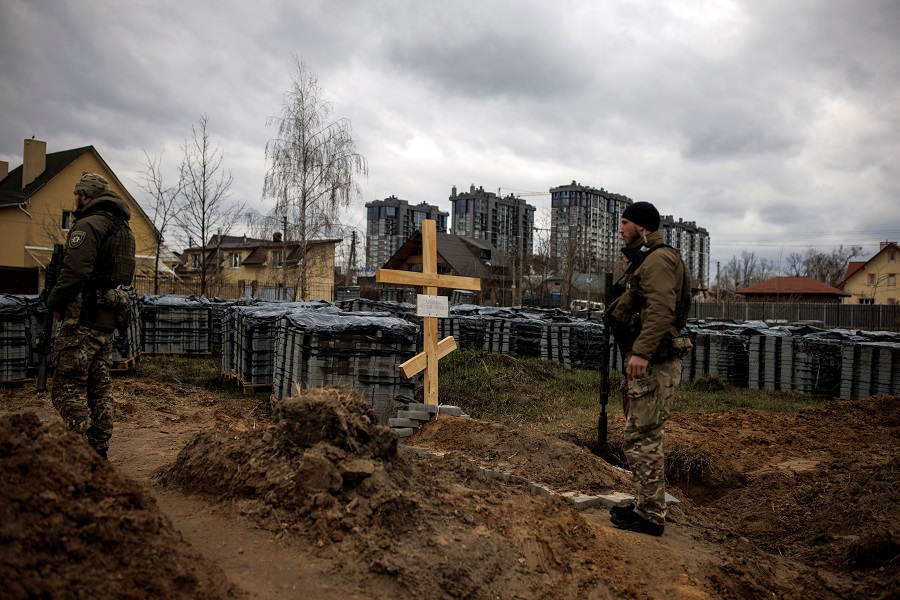 Ukrainian soldiers stand next to the grave of a civilian, who according to residents was killed by Russian soldiers, amid Russia's invasion of Ukraine, in Bucha, Kyiv region, Ukraine, 6 April 2022. (Alkis Konstantinidis/Reuters)

Grace Chong - 2 December 2022
Caixin notes that China is poised to roll out more policies to assist developers in an increasingly desperate attempt to arrest a protracted downturn of the multi-trillion-dollar property sector. However, amid the perform storm of changing demographics, Covid-19 disruptions, weakening demand and Beijing’s campaign of deleveraging, industry practitioners are bracing for a tough battle.
Read more
Translated by Grace Chong on 7 April 2022

Reports of Russian troops killing, raping and torturing Ukrainian civilians as they retreated from the outskirts of Kyiv this week have shocked and angered international society. They have also made China’s push for peace talks on the Ukraine war that much harder.

At a United Nations Security Council (UNSC) briefing on 5 April, China’s permanent representative to the UN Zhang Jun stood firm on not condemning Russia. He said, “Before the full picture is clear, all sides should exercise restraint and avoid unfounded accusations.”

But after further evidence emerged of Russian troops raping women and killing civilians, the cost to China's international image of not condemning Russia, and the pressure on public opinion to do so, are both mounting. How long will China continue to oppose the war but not condemn the aggressor? I believe Chinese officials are reevaluating the situation and weighing the pros and cons of their stance behind the scenes.

The 5 April UNSC briefing focused on Russia’s alleged massacre in Bucha, a Kyiv suburb. As Russia and Ukraine had their expected heated exchange, China, which is friendly to both countries, was left in an awkward position.

The tightrope of opposing the war but not condemning the aggressor

Without condemning Russia, Zhang said that China strongly hoped for “de-escalation and putting an early end to the conflict in Ukraine”. But he also said, “Attacks against civilians are unacceptable and should not occur.”

Zhang described reports and images of civilian deaths in Bucha as “deeply disturbing”, asserting that the “relevant circumstances and specific causes of the incident should be verified and established”.

Does China believe Russia’s claims that the evidence of civilian killings was staged by the West?

He reiterated China’s position and urged “the two sides to stick to the general direction of peace negotiations, overcome difficulties and differences, and continue to build conditions for a comprehensive settlement of the crisis”. He also called on international society to “create favourable conditions and environment for negotiations” between both sides, and not “set up obstacles for peace, let alone add fuel to the fire in aggravation of confrontations”.

Does China believe Russia’s claims that the evidence of civilian killings was staged by the West? Chinese foreign ministry spokesperson Zhao Lijian maintained the same position as Zhang at his regular press conference on 6 April, refusing to take sides on the killings and choosing to wait for clarity on the situation.

Zhao said that China was “highly concerned with the harm to civilians” and before the situation became clear, “all sides should exercise restraint and avoid unfounded accusations”.

Actually, after the war dragged on and the massive casualties incurred in Ukraine came to light, Russia’s heinous acts as the aggressor in the conflict have deepened Russia-Ukraine hatred. Not only that, instead of building the conditions needed for a comprehensive solution, it is creating further obstacles for peace talks.

To the neighbouring European Union (EU) countries, this is both a threat to national security and something that these Western countries, which fly the banner of human rights up high, will not condone.

China continues to hold on to its “no limits” relationship with Russia, and adopts a policy of appeasement on the Ukraine issue. It is unmoving in advocating mediation and talks, and is wearing down the expectations and patience of the EU towards China.

Josep Borrell, High Representative of the European Union for Foreign Affairs and Security Policy, early last month publicly called for China to be a neutral mediator. On 5 April, Borrell briefed the European Parliament on the first bilateral summit in almost two years between China and the EU, describing the session on 1 April as a “dialogue of the deaf”, showing that both sides are drifting apart.

Borrell said China only wanted to say its own thing, and “did not want to talk about Ukraine. They didn’t want to talk about human rights and other stuff and instead focus on positive things”, and there was no agreement reached. He criticised China for not acting like a big country: “China cannot pretend to be a great power but close its eyes or cover its ears when it comes to a conflict that obviously makes it uncomfortable because it knows very well who the aggressor is, although for political reasons, refuses to name them.”

He said that any attempts to assist Russia militarily or to help Russia circumvent the sanctions that were taken would have serious consequences and would deteriorate China-EU relations. He stressed that the EU called on China to use its influence with Russia to reach an immediate ceasefire and to support humanitarian corridors.

Late last month, Chinese ambassador to the US Qin Gang said China holds a unique position and assets when it comes to the Ukraine issue, and “only China has the ear of Russia”, adding that China’s relations with Russia should be seen as an asset and opportunity to resolve the Ukraine crisis. But there is no sign of an end to the fighting while Russian troop action seems to be escalating, weakening the credibility of this narrative.

Borrell also told the European Parliament that China stuck to general statements of wishing to see peace — “we are peaceful people, we do not invade the others” — asking for de-escalation, but avoiding specific commitments or any kind of blame on Russia.

China does not want western Europe to get closer to the US, but that is happening faster and faster, and China is losing geopolitical points.

On 6 April, Zhao also said firmly that the leaders of China and the EU held a “very successful meeting”. Without naming Borrell, Zhao criticised his comments as irresponsible and running counter to facts.

As China and Europe continue to say their own thing and the opposition intensifies, while it looks like China is consolidating relations with Russia on the Ukraine issue, there is no doubt that it is rapidly losing mutual political trust with Europe. China does not want western Europe to get closer to the US, but that is happening faster and faster, and China is losing geopolitical points.

On 4 April, following a phone call between Chinese State Councilor and Foreign Minister Wang Yi with Ukrainian Foreign Minister Dmytro Kuleba, there was speculation that Chinese President Xi Jinping would soon hold the first dialogue with Zelenskyy since the war began.

If China’s influence on Russia does not yield real results in the near future and China only clings to its stand of encouraging peace talks and not denouncing Russia, there will be an inevitable negative impact on China’s international image and credibility.