When the US started the International Space Station (ISS) in the 1990s, China was not part of the programme. While many think that China was left out, others say that China spearheaded its own spaceflight programme and never asked to be included in the ISS. Now, with China’s Tiangong space station project well underway, it could push ahead and lead the space exploration race when the ISS expires in 2024. Zaobao correspondent Yu Zeyuan explores the implications. A giant screen shows a view of earth from the Tianhe core module of China's space station, at a shopping mall in Beijing, China, 18 June 2021. (Thomas Peter/Reuters)

Candice Chan - 18 May 2022
The Chinese government has recently announced plans to establish a unified national market that is highly efficient, standardised, open and competitive. It would break down walls, raise the standards of the business environment within China and act as a buffer against external pressures. While the intention is good, NUS academic Lu Xi points to possible drawbacks and challenges.
Read more
Translated by Candice Chan on 21 June 2021

On 17 June, China’s crewed Shenzhou-12 capsule was successfully launched on its Long March 2F rocket. Astronauts Nie Haisheng, Liu Boming, and Tang Hongbo have made it to the core Tianhe module of the Tiangong space station, where they will spend the next three months in orbit.

This marks the operational phase for China’s space station. The US-led International Space Station (ISS), which is the only other space station in orbit so far, has a new partner — or rival.

Comments in China have veered towards portraying the Chinese space station as a rival to the ISS. Over the past few days, some China media have been celebrating China’s major advancements in spaceflight while talking about the US’s “disappointment”, “worry”, and “unease”.

A commentary in the Global Times on 17 June said that when the rocket launched the Shenzhou-12, it was like a spear in the sky, piercing through the US’s “massive technical blockade”; it was not just a “moment of excitement” for the Chinese people, but “a moment of frustration for those who advocate the US’s ‘blockade’ and ‘decoupling’ with China”.

... China has already selected the first group of 16 countries that will work on nine projects involving the Tiangong, including Russia and Pakistan... as well as US allies such as Germany, France, and Italy; even seemingly unfriendly Japan and India are included. The US is not.

The commentary said China was the only major country to be left out of the ISS, and Washington arrogantly believed that China’s technological advances were all dependent on “stealing”, and isolating China would hold back China. But spaceflight is the sector where China has made the strongest progress; it has built its own space station precisely because it was left out, and in a few years, it will be the only space station in orbit, as the ISS is currently set to expire in 2024. The terrain of China-US competition in international spaceflight cooperation is changing.

Some media stressed that the ISS is set to be decommissioned in a few years, and since the US has always refused to allow China to be a part of the ISS project, the US will also be left out of the Chinese space station’s projects.

These observations are based on the fact that China has already selected the first group of 16 countries that will work on nine projects involving the Tiangong, including Russia and Pakistan — which have better relations with China — as well as US allies such as Germany, France, and Italy; even seemingly unfriendly Japan and India are included. The US is not.

China left out or simply never asked to join?

But while the US has excluded China from the spaceflight technology sector, there is no evidence that the US refused to allow China to participate in the ISS, as China had not asked to join.

In 1992, China began its crewed spaceflight programme. From the start, it was not tied down by others, and started to build its own space station. Construction on the ISS began in November 1998 with Russia’s launch of the Zarya module; one year later, China launched the Shenzhou-1 uncrewed spacecraft, followed by the rest of the Shenzhou series. In 2003, it achieved the first crewed spaceflight with the Shenzhou-5 spacecraft. Subsequently, China steadily developed a new generation of launch rockets, as well as the Shenzhou and Tiangong series, setting a firm foundation for building the current Tiangong space station. It no longer has to ask to join the ISS.

As reported in a seetao.com article, in 2017, Zhu Zongpeng, chief designer of Tiangong No. 2 of the Fifth Academy of Aerospace Science and Technology Corporation, said in a CCTV programme that China has never applied to join the ISS.

Undoubtedly, even if China did apply, the US would reject the application on grounds of its domestic regulations, especially the Wolf Amendment that was passed by the US Congress in 2011. But this does not mean that China applied to join the ISS only to be rejected by the US.

At the same time, in contrast to the US’s clear exclusion of China in the aerospace technology field, Chinese officials have never excluded any country from its space station cooperation project; they just have a set of strict selection criteria. These criteria, according to the seetao.com article, include complying with the UN’s basic principle of using outer space for peaceful purposes; having a clear scientific purpose that promotes the progress of related science and technology fields; having a feasible technical plan and sound engineering capabilities so as not to pose a threat to the space station; and being able to bear the costs of project research and development on their own.

The seetao.com article added that in June 2019, when asked if China’s space station had excluded projects from the US, Zhou Jianping, chief designer of China's Manned Space Engineering programme, said, “We did not exclude any countries, nor did we limit any scope. There are US teams participating in the declared projects. In terms of scientific value and technical considerations, the American project did not meet the required standards.”

It is debatable whether China will bar the US from participating in its space station projects for technological reasons. But in terms of space station cooperation, apart from developed countries like Germany, France, Italy, and Japan, China’s selected partners already include developing countries such as India, Mexico, and Peru. This is a step forward from the ISS that mainly consists of developed countries.

Undoubtedly, China and the US are destined to be long-term competitors in high-tech fields such as aerospace. But this does not mean that cooperation is impossible.

Following the successful launch of the Shenzhou-12 crewed spacecraft, National Aeronautics and Space Administration (NASA) administrator Bill Nelson congratulated China and said that he looks forward to “the scientific discoveries to come”.

Nelson’s congratulatory message seems perfunctory, but this is better than silence or mockery. Undoubtedly, China and the US are destined to be long-term competitors in high-tech fields such as aerospace. But this does not mean that cooperation is impossible. Even though the US and the former Soviet Union were once locked in a space race, the US and Russia ultimately established the ISS together.

The ISS is set to expire in the next few years. When that happens, if China’s space station welcomes American astronauts with open arms, it would not only be a good outcome for both countries, but a win for humanity’s peaceful use of outer space.

Related: China's going full speed ahead on technology innovation. Will it work? | Has China surpassed the US in the 5G race? | China’s strides in technology good for US and the world Technology
Tencent struggles to grow amid crackdowns and competition 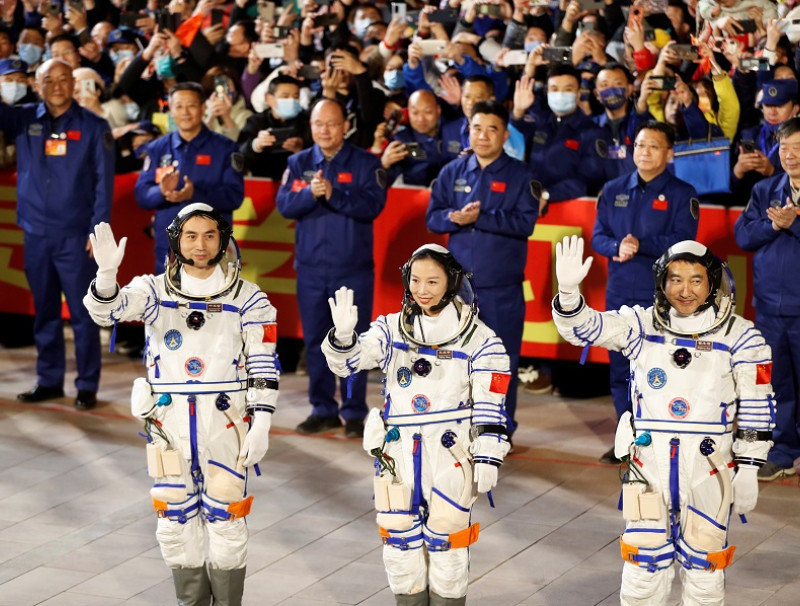 Technology
Can commercial space programmes take off in China?