With its latest “final test-fire” of a hypersonic missile, the DPRK has shown that its nuclear capabilities have increased significantly since the Trump-Kim summit in Hanoi in 2019. In fact, US-DPRK relations have regressed to pre-Pyeongchang Winter Olympics levels with the US imposing new sanctions. It may seem like just another trough in the instability of the Korean Peninsula, but if the world looks away, the situation may just reach boiling point before anyone realises it. 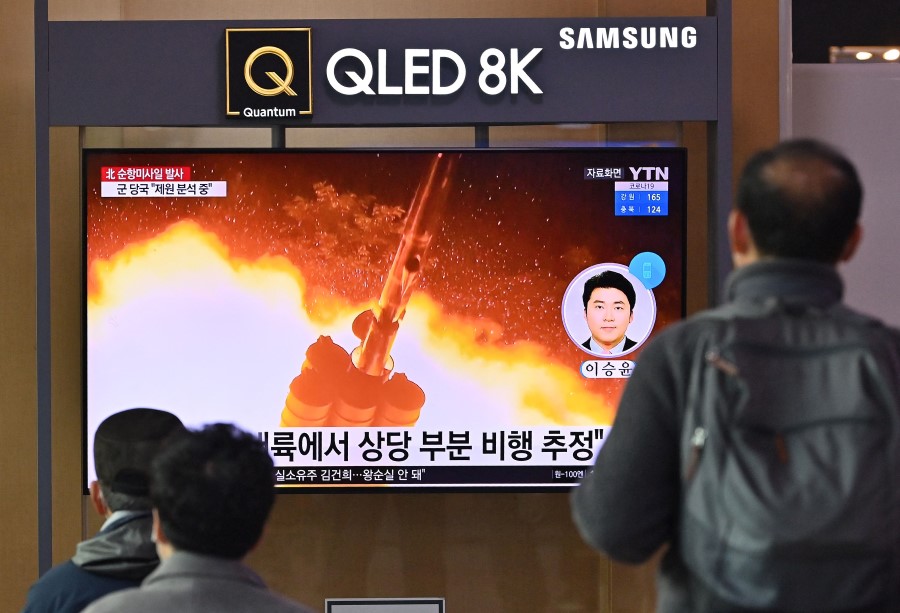 People watch a television screen showing a news broadcast with file footage of a North Korean missile test, at a railway station in Seoul on 25 January 2022, after North Korea fired two suspected cruise missiles according to the South's military. (Jung Yeon-je/AFP)

Candice Chan - 6 December 2022
Commentator Chen Kuohsiang notes that even after the 20th Party Congress and talks between Chinese and US Presidents Xi Jinping and Joe Biden during the G20 summit, the Chinese economy is not facing an easy time, not least because of Covid-19 controls, the US's trade restrictions and China's stringent policy on private enterprises.
Read more
Translated by Candice Chan on 26 January 2022

North Korea (DPRK) conducted four missile launches in the first fortnight of 2022, during which the US announced a new round of sanctions against the DPRK. The easing of tensions in the Korean peninsula since the 2018 Pyeongchang Winter Olympics seems to have come to an end, with the US and DPRK commencing a new cycle of confrontation over nuclear missile developments and sanctions.

Since the collapsed 2019 Hanoi Trump-Kim summit, the window of detente in the Korean peninsula had tended towards closing shut. With both countries superficially maintaining stability without crossing each other’s red line, tensions in the peninsula had basically eased. However, after the DPRK conducted a high-profile “final test-fire” of a new hypersonic missile on 11 January 2022, the US once again imposed sanctions against it. The DPRK then launched two short-range ballistic missiles within a week.

This new cycle of confrontation between the US and DPRK is not simply history repeating itself. Instead, it takes place in more dire circumstances in the peninsula. While the US sanctions remain routine, the DPRK’s nuclear capabilities have qualitatively changed.

Since the Hanoi summit, the DPRK has repeatedly launched missiles but has basically not crossed the red line of testing intercontinental ballistic missiles, which was set by the Trump administration. Opinions differ on whether the DPRK’s various missile launches have violated UN Resolutions on the sanctions against it.

...the DPRK has achieved a major breakthrough in hypersonic missiles, further enhancing its nuclear capabilities and cementing its status as a nuclear-weapon state.

After the Eighth Congress of the Workers’ Party of Korea last year, the DPRK formulated a five-year military plan, especially in R&D of hypersonic missiles. It is noteworthy that while the DPRK leader Kim Jong-un did not appear at missile launches for some time, the 11 January “final test-fire” of the hypersonic missile was conducted under his watch. This signifies that this successful “final test-fire” of the hypersonic missile is a major breakthrough in the DPRK’s missile capabilities and is of great political significance.

Meanwhile, it must be noted that on 3 January, the five permanent members of the UN Security Council issued a joint statement on preventing nuclear war and avoiding arms races. In the subsequent week, the DPRK conducted two successful hypersonic missile test launches. In particular, the missile in the 11 January “final test-fire” travelled 1,000 kilometres. The US early warning systems misjudged that the missile “could hit [the] US”, resulting in confusion in some US airports and grounded flights.

The significance of the DPRK’s “final test-fire” may be twofold. First, the DPRK has achieved a major breakthrough in hypersonic missiles, further enhancing its nuclear capabilities and cementing its status as a nuclear-weapon state. Second, the DPRK can halt its test launches for some time in the future.

The resumption of US sanctions against the DPRK means that the US’s patience with the DPRK, since the Trump administration in 2018, has run out. The Biden administration has completed its DPRK policy evaluation but has adopted a taciturn policy towards the DPRK. It has repeatedly said that both sides could have conversations, but the Biden administration has neither changed its demand for DPRK’s denuclearisation nor ended or eased the severe economic sanctions against the DPRK.

In the latter half of 2021, the DPRK’s demand ahead of US-DPRK dialogues was for the US to end its “hostile policy” and “double standards” towards the DPRK. This premise implied that the DPRK’s nuclear capabilities are a reality that should be squarely recognised for the US-DPRK relations to be normalised. The positions of both sides basically regressed to those prior to the Pyeongchang Winter Olympics, and their differences remained despite tactful articulations.

Since 2019, the situation in the Korean peninsula appeared relatively stable, and the “fire and fury” of 2017 did not resurface. However, undercurrents continue to surge with latent flashpoints.

First, the DPRK has significantly enhanced its nuclear capabilities with continuous improvements in the transport of nuclear weapons, as well as the repeated launches and tests of various missiles, including submarine-launched missiles, hypersonic missiles and cruise missiles. Among these, the hypersonic missile is a breakthrough in the DPRK’s strategic arsenal.

Second, the DPRK is in lockdown for a long time during the current Covid-19 pandemic, which is grimly dire to its economy. If the DPRK can avoid serious economic problems, it will have the wherewithal and confidence to counter the US sanctions, and the military developments approved by the Eighth Congress of the Workers’ Party of Korea can proceed without worrying about US reactions.

...this new cycle will be more dangerous, with greater probability of misjudgment and greater risks of the situation spinning out of control.

Third, by lifting restrictions on South Korea’s missile development programme, the US has in reality triggered the missile arms race between the north and the south of the Korean Peninsula.

Fourth, the Biden administration has reinforced its Indo-Pacific strategy by forming the AUKUS, a new Indo-Pacific alliance with Australia and the UK, and selling nuclear-powered submarines to Australia, which has disrupted the strategic balance in Asia-Pacific.

This cycle of escalation may lead to greater misjudgments

As the US and DPRK enter a new cycle of confrontation, the rivalry over denuclearisation will intensify. Due to the numerous latent and significant changes in the Korean peninsula in recent years, this new cycle will be more dangerous, with greater probability of misjudgment and greater risks of the situation spinning out of control.

First, in the final lap leading up to the South Korean presidential election, Moon Jae-In's Moonshine Policy to engage DPRK will end in vain despite the 2018 Panmunjom Declaration to end the Korean conflict, adopted between Moon and DPRK's Kim Jong-un during the inter-Korean Summit. If the South Korean conservatives come into power, DPRK-ROK relations will inevitably be more tense.

Second, the US will hold its mid-term elections in 2022. Biden’s policy of strategic patience has been disrupted by the DPRK’s nuclear missile capabilities, especially the confusion caused by the testing of hypersonic missiles. This means that Biden can hardly continue its administration's inaction, and it also cannot ignore DPRK's moves.

Third, due to the Covid-19 pandemic, sanctions and frequent natural disasters, the DPRK economy seems to have reached a critical point. As the world comes to grips with Covid-19 measures, the DPRK will also adjust its lockdown policy, as exemplified by the recent resumption of land transportation with China.

Multiple challenges exist regarding the Korean peninsula situation, including those of nuclear weapons, superpower politics, a divided peninsula, UN sanctions and the requirements of the non-proliferation of nuclear weapons. In the cyclical aggravating and easing of confrontations, the risks involving the Korean peninsula has spiralled upwards because of these juxtaposed challenges, and is now looking very much like a group dancing on a tightrope.

Without compromises by the various parties and facilitation by superpowers in particular, the new cycle of confrontation in the Korean peninsula is undoubtedly a charging Grey Rhino, a highly probable, high impact yet neglected threat to the world.