With AUKUS, Southeast Asia may become a more intense battleground

Yogesh Joshi points out that the new AUKUS shows an American recognition of the military threat from China, which is assessed to have the world's largest navy. Such anxiety has the US sharing its most prized military technology of nuclear propulsion with Australia, something it has never done with any country except the UK. With the US determined to maintain primacy in the Indo-Pacific, will there be a greater chance of inadvertent escalation of tensions? Will the Southeast Asian region suffer the brunt of heightened risks? 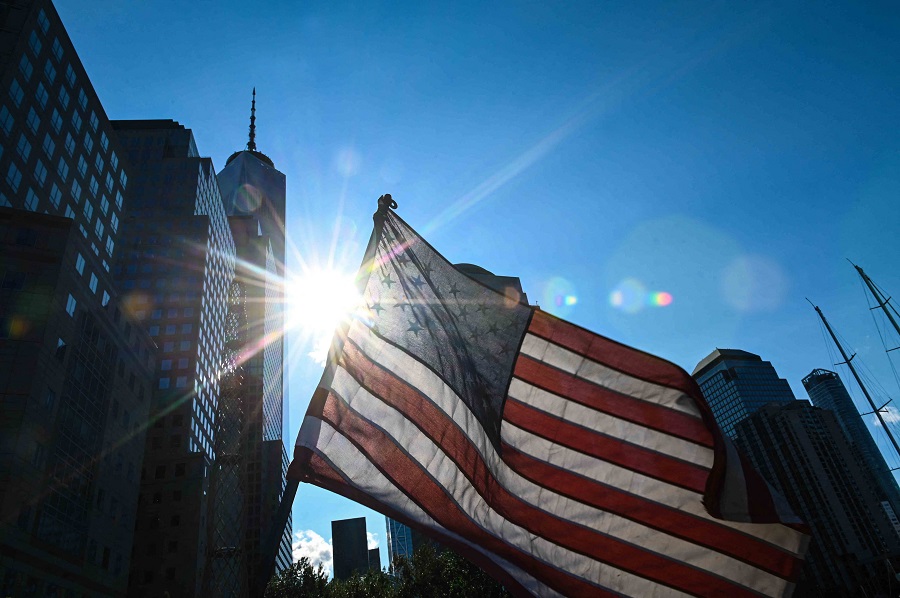 A US flag flutters in the wind near the National 9/11 Memorial & Museum on 10 September 2021 in the US. (Roberto Schmidt/AFP)

Grace Chong - 13 May 2022
Despite the decline in daily new Covid-19 cases over the past week, Shanghai has seen stricter anti-epidemic controls implemented to the point of absurdity. Zaobao correspondent Yang Danxu highlights the stranger-than-fiction happenings in Shanghai that have sparked public outrage and shaken people’s confidence in China’s zero-Covid policy.
Read more
Translated by Grace Chong on 27 September 2021

The announcement of AUKUS, a trilateral defence pact between the US, UK, and Australia has created a tempest in the already choppy waters of the Indo-Pacific. Under the agreement, the US has agreed to supply Australia with a fleet of six nuclear attack submarines (SSNs). Never has Washington DC helped any other state, except the British, with its most prized military technology of nuclear propulsion. The agreement also underlines cooperation in many other strategic defence sectors including cyber, artificial intelligence, quantum technologies, and undersea sensing technologies.

Even when the agreement will take almost a decade to fructify and Australia will acquire these submarines only by 2030, the strategic significance of AUKUS for the Indo-Pacific cannot be underestimated.

First, the exceptional nature of the agreement is both an indicator of growing American vulnerability vis-à-vis China’s growing naval power in the region but also attests to the fact that the US has finally accepted the need to balance China. In sheer numbers, the rise of the PLA Navy (PLAN) in the region has been nothing less than miraculous.

From being a small coastal navy in the 1980s and the 1990s, the PLAN has now emerged as the “largest navy in the world”. According to estimates from a Lowy Institute report, the Chinese shipbuilding programme “launched more than 600,000 tonnes” of naval combatants between 2016-2020, almost 50% more than the American yards. The Chinese shipbuilding industry churns out more vessels than most of the major maritime powers in the Indo-Pacific combined.

The balance of naval power in the Indo-Pacific is therefore shifting rapidly. Experts have underlined that without corrective measures, the PLAN will be able to fully dominate the Indo-Pacific by 2035. The AUKUS, therefore, is first an acceptance of the US’s growing vulnerability in the region.

AUKUS is so far the clearest assertion of US intentions to maintain its primacy in the Indo-Pacific.

However, it also underlines that in the ensuing great power rivalry, the US will not let China dominate without a fight. Both technology and the presence of allies provide a significant edge to the US. Even when PLAN can field more naval combatants, the US Navy enjoys vast technological superiority. AUKUS aims to hit China where it hurts the most. Nuclear submarines in the hand of American allies will not only hem PLAN within the first island chain, but it will also neutralise the asymmetric advantage China has gained by developing and deploying ship-killing missiles such as DF-21 and DF-26. AUKUS is so far the clearest assertion of US intentions to maintain its primacy in the Indo-Pacific.

Complementary roles of AUKUS and Quad

Second, AUKUS will strengthen the Quadrilateral Security Dialogue (Quad) further. The announcement of AUKUS occurred just a week before the heads of states of the Quad — a loose coalition of the willing among Indo-Pacific’s maritime democracies comprising Japan, India, Australia, and the US — were to physically meet in Washington DC. Some have argued that AUKUS signifies the growing frustration within the US over the lack of military assertiveness and security cooperation within the Quad. AUKUS may well signify a shift in US attitude where it accords a central security role to AUKUS and relegates Quad to focus on soft balancing. Quad’s agenda may therefore increasingly centre around vaccine diplomacy, civilian technology cooperation, supply chain management, norm-building, and intelligence cooperation. Yet, both India and Japan have welcomed the AUKUS for two reasons.

With AUKUS, the Quad is more assured of US intentions, and it will only further the cooperation between Indo-Pacific’s maritime powers.

First, all Quad countries seek greater and not less US involvement in the region. Insofar as AUKUS signifies America’s intention to stay and prolongs its staying power in the region and correspondingly complicates China’s naval power and ambitions, India and Japan would be more than satisfied. Second, both New Delhi and Tokyo understand that the US’s willingness to share its deepest military secrets is directly dependent upon China’s rise and its assertive attitude. If China continues to challenge American primacy and assert its military and economic power in the region, the US will be more forthcoming to pursue similar agreements with India and Japan in the future. With AUKUS, the Quad is more assured of US intentions, and it will only further the cooperation between Indo-Pacific’s maritime powers.

Southeast Asian states caught in between

Third, AUKUS exacerbates the strategic dilemma for the Southeast Asian states, sandwiched between China’s power and proximity on one hand, and the US intention to save its primacy on the other in three ways.

First, as nuclear submarines become the primary weapon of choice in the Indo-Pacific, Southeast Asia will be their primary area of operations. Their maritime interests were already threatened by China’s aggressive naval and fishing operations in the South China Sea. Aggressive naval balancing by Quad countries will not only increase the risks of accidental and inadvertent escalation but may result in further loss of sovereign decision-making.

As US-China rivalry heats up, ASEAN faces serious divisions within.

Second, ASEAN’s rather muted response to Chinese aggression and its disunity facing Chinese power has created rifts between Southeast Asian states. ASEAN has criticised the Quad’s earlier attempts to establish a direct dialogue with other ASEAN countries such as Vietnam. Even AUKUS has elicited mixed responses from the region: whereas Malaysia and Indonesia have criticised the deal, Vietnam and the Philippines have been relatively more welcoming in their approach. As US-China rivalry heats up, ASEAN faces serious divisions within.

Lastly, new and expanding security institutions like AUKUS and Quad reduce the reliance and importance of ASEAN and ASEAN-led institutions such as the ASEAN Regional Forum (ARF) in managing the region’s economic and security landscape. “ASEAN centrality”, which all major powers often echo, is increasingly becoming collateral damage of Sino-US rivalry.

With AUKUS, the Indo-Pacific has entered uncharted waters. The battle for primacy between the rising power and the extant hegemon has gained far greater intensity by a single decision to boost Australia's naval power compared to decades of behind-the-curtain diplomacy with Quad and other ASEAN countries. The US has not only put China on notice but also alerted the Quad and other ASEAN countries that in its fight for primacy, it will be willing to employ all resources available in its national power.

Related: AUKUS: Aggravating tensions and dividing the world | The US has AUKUS. Where are China's alliances? | Japanese academic: China needs to show more self-restraint in PLA's military activities | China-US competition: Why small countries will not choose sides | Vietnamese still favours the US despite Afghanistan spectre