America's coming back — but ASEAN will cope, with or without her

Since President Donald Trump yanked the US out of the TPP as part of his “America First” doctrine in 2017, Southeast Asia has been more without Trump than with. In fact, America is increasingly seen as a declining power in Southeast Asia and countries in the region are adjusting to this reality. ISEAS academic William Choong explains what this means for the US, China and ASEAN. 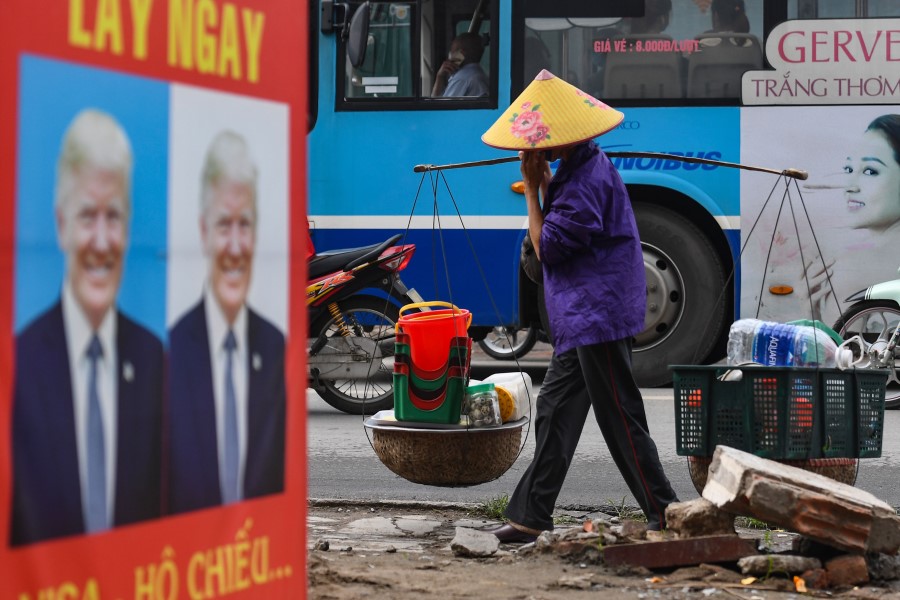 A street vendor walks past a billboard for a photo studio featuring an image of US President Donald Trump in Hanoi, 24 November 2020. (Nhac Nguyen/AFP)

Candice Chan - 18 May 2022
The Chinese government has recently announced plans to establish a unified national market that is highly efficient, standardised, open and competitive. It would break down walls, raise the standards of the business environment within China and act as a buffer against external pressures. While the intention is good, NUS academic Lu Xi points to possible drawbacks and challenges.
Read more
Translated by Candice Chan on 4 December 2020

In May 2016, President Barack Obama waxed lyrical about the Trans-Pacific Partnership (TPP), arguing that the “greatest economic opportunities” are in the Asia-Pacific, and that Washington needed to “call the shots” and “write the rules” on regional trade agreements.

Fast forward four years later, and all this is history. Immediately upon taking office in the White House in 2017, President Donald Trump yanked the US out of the TPP as part of his “America First” doctrine to protect American jobs. Since then, Southeast Asia has been more without Trump than with. He did not, for example, meet a single Southeast Asian leader between November 2019 and October 2020. Actions, or the absence, matter. In ISEAS’ State of Southeast Asia survey published in January, the US was seen as a declining power by 77% of 1,308 respondents. Only 26.7% saw the US as the most important strategic and political partner, against 52.2% for China.

In the wake of President Trump’s on-off attention towards Southeast Asia, China is making hay as shown in the ISEAS survey. Recently, members of ASEAN and another five countries – Australia, China, Japan, New Zealand and South Korea — signed the Regional Comprehensive Economic Partnership (RCEP). The absence of the US from the deal, which constitutes 30% of global economic output, is conspicuous. China’s President Xi Jinping has suggested that Beijing join the TPP’s successor, the Comprehensive and Progressive Agreement for Trans-Pacific Partnership (CPTPP) — a move that a Japanese broadsheet has termed Mr Xi’s “revenge” against Obama. Conversely, the US will not return to the CPTPP anytime soon, given widespread preconceptions in the US that free trade deals have caused the loss of American jobs.

The US remains Southeast Asia’s largest foreign direct investor, and has a formidable series of alliances and partnerships to boot.

President Xi has been active at three recent virtual summits — the BRICS (Brazil, Russia, India, China and South Africa) summit, APEC Economic Leaders’ Meeting and the Group of 20 meetings. He has called on nations to establish a global health QR code for international travel and promised countries access to Chinese Covid-19 vaccines. President Trump, despite clearly losing the 3 November presidential election, told the other G20 leaders that he looked forward to working with them for a long time, and that he wanted Americans vaccinated against Covid-19 first.

Southeast Asia will depend on regional self-help

Of course, the US still retains an edge. To push back against Chinese expansion in the South China Sea, the Trump administration has conducted 24 freedom of navigation operations in the South China Sea — six times more than during the Obama administration. The US remains Southeast Asia’s largest foreign direct investor, and has a formidable series of alliances and partnerships to boot.

Speaking to CNN’s Fareed Zakaria in March, Singapore Prime Minister Lee Hsien Loong called on Washington to marshal its resources, influence and soft power for the “greater good”. But he added that if America is in “a different mode”, the region will “get by” and “other configurations will eventually work out but it would be a loss”. In a sense, this is already happening. And from preliminary indications, regional self-help behaviour — with or without American leadership — is yielding results.

RCEP is concluded. After Trump abandoned the TPP, Japan and other countries worked assiduously to push through the CPTPP, which includes Brunei, Malaysia, Singapore and Vietnam. Some Southeast Asian states such as Malaysia, the Philippines and Vietnam are pushing back at China in the South China Sea at the UN, with a series of note verbales rejecting China’s “nine-dashed line” and “historic rights” claim to the maritime area. They did not do it out of any direct compulsion to close ranks with the US, but simply because their national interest behooves them to do so.

Around the turn of the century, Filipinos’ love and loathing of the United States was summed up in the saying “Yankee Go Home – But Take Us With You.” The contemporary analogue today could well be “Yankee Come Back – But We Will Cope, With or Without You”.

The ASEAN Outlook on the Indo-Pacific, which some have criticised for taking too impartial a position in the ensuing Sino-US rivalry, is a clear expression of ASEAN’s attempt to put its own imprimatur on the emerging Indo-Pacific concept distinct from the Free and Open Indo-Pacific one of the Trump administration. It is heartening to note that President-elect Joseph Biden has used the “secure and prosperous” Indo-Pacific formulation in calls with the leaders of three US allies — Australia, Japan and South Korea. He may have listened to feedback that using the Trump formulation of a “free and open” Indo-Pacific (as in “freedom and openness” within countries or between them) might not go down well. Vietnam, the ASEAN chair this year, has also contributed much to the grouping’s success thus far, primarily in the economic domain, Covid-19 recovery plans and innovation for a post-pandemic world.

And there is room for ASEAN to go further. Frederick Kliem recently wrote that ASEAN should assert its agency amid externally-imposed geopolitics by treating the South China Sea and the sub-Mekong region as one strategic space. Smaller powers in Southeast Asia should “leverage their agency” further by involving great powers on a “united ticket” in the sub-region, he argues.

The fact remains that with the US or not, regional states are finding their footing — and agency — amid the ensuing Sino-US rivalry. They deal with whatever the strategic environment throws at them. Around the turn of the century, Filipinos’ love and loathing of the US was summed up in the saying “Yankee go home — but take us with you”. The contemporary analogue today could well be “Yankee come back — but we will cope, with or without you”.

This article was first published by ISEAS – Yusof Ishak Institute as Fulcrum Commentary 2020/196 “Yankee Come Back – But We Will Cope, With or Without You” by William Choong.

Related: ASEAN’s future: China or the US? | America needs to value Southeast Asia for its own sake, and not just as a tool to fight China | Now more than ever, Southeast Asia values a firm American security presence