ASEAN is set to play host to world leaders, with three major events coming up over the next two weeks in Cambodia, Indonesia and Thailand. The highlight is the G20 summit in Bali, where US President Joe Biden and Chinese President Xi Jinping are expected to meet face-to-face for the first time. Zaobao associate editor Han Yong Hong analyses what we can expect from these meetings. 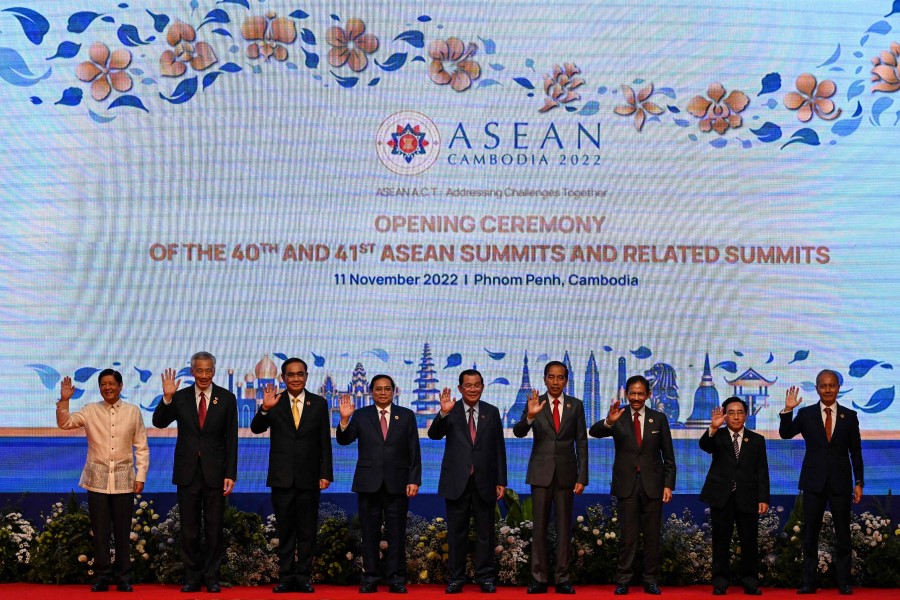 ASEAN leaders at the opening ceremony of the 40th and 41st Association of Southeast Asian Nations (ASEAN) Summits in Phnom Penh on 11 November 2022. (Tang Chhin Sothy/AFP)

Candice Chan - 28 November 2022
Often referred to as the world’s economic “canary in the coal mine”, South Korea has seen its economy tumble over the past year, impacted by external factors such as US interest rate hikes and signs of recession in key trade partners. The accumulation of domestic factors — currency crisis, tumbling stock market and rising inflation — is also hitting the South Korean economy hard. However, this industrial powerhouse has the domestic means to climb out of the doldrums.
Read more
Translated by Candice Chan on 11 November 2022

Three years after the pandemic began, high-level international diplomacy is restarting. Over the next two weeks, world leaders will gather in Asia for a series of important diplomatic and economic meetings hosted by ASEAN member states Cambodia, Indonesia and Thailand.

Reaching consensus will be a challenge

The flurry of meetings will start off with the 40th and 41st ASEAN Summits and Related Summits, the first in-person ASEAN summit since the pandemic. Premier Li Keqiang will make his first overseas trip in three years to represent China in the meetings, while US President Joe Biden, who made it through the midterm elections, will also fly to Phnom Penh, his second trip to Asia after visiting Japan and South Korea in May.

The G20 Summit which will open in Bali on 15 November is undoubtedly the highlight of this string of summits. An intergovernmental forum comprising 19 countries and the European Union, the G20 represents over 80% of global economic production, 75% of global trade, and 60% of the global population. Following the outbreak of war in Ukraine in February, key world leaders — especially China and the US — will attend the sessions in person, lending a lot of weight to this G20 summit. This will be Chinese President Xi Jinping’s second overseas trip since the pandemic.

... the biggest issues on leaders’ minds are global inflation and difficulties in economic recovery, the prospect of Russia using nuclear weapons, and global energy security.

Indonesia has set the G20 theme of "Recover Together, Recover Stronger", with three priority issues of global health architecture, digital economy transformation, and energy transition — making way for discussions based on a positive agenda and the greatest common ground. However, the biggest issues on leaders’ minds are global inflation and difficulties in economic recovery, the prospect of Russia using nuclear weapons, and global energy security.

Indeed, reaching a consensus at large-scale meetings will prove to be a challenge amid an increasingly divided world. Hence, the greater focus will be on the sideline bilateral exchanges and meetings.

The highly anticipated meeting between Xi Jinping and Joe Biden is expected to take place in Bali. While the two leaders have spoken on the phone and via video conference several times, this will be the first face-to-face meeting since Biden took office.

At a press conference in the US, Biden laid out an agenda for the meeting with Xi, including discussing Taiwan, the war in Ukraine, fair trade, the number and location of China’s nuclear weapons, as well as the “red lines” of both parties and whether they are in conflict. Beijing clearly opposes the US’s high-profile intervention in cross-strait affairs, so it is unlikely that a Xi-Biden meeting will achieve concrete results, apart from each side reiterating their stance. But this would still be better than no meeting at all. So, the Xi-Biden meeting at the G20 is worth looking forward to.

Meanwhile, whether Xi will have any interaction with Ukraine, in particular Ukrainian President Volodymyr Zelenskyy, during the G20, is also worth watching.

Russian President Vladimir Putin will not be attending the G20 summit in person, despite Russia’s G20 membership. Meanwhile, Zelenskyy will represent non-member Ukraine via video conference. This is a deft and balanced show of diplomacy by the host Indonesia. Following Russia’s invasion of Ukraine, Indonesia is well aware that Putin’s attendance would be a hot point of contention among Western countries. Indonesian President Joko “Jokowi” Widodo had invited the leaders of both Russia and Ukraine, but Zelenskyy made it clear that he would not attend if Putin did. Hence, Putin’s non-attendance made way for Zelenskyy’s online participation.

In fact, Zelenskyy has made many public calls to speak directly to Xi to help Ukraine. In an interview with French media in September, Zelensky commented that despite the communication channels between Kyiv and Beijing that existed before the war, speaking with Xi is now “difficult”. Zelensky also criticised China’s ambivalent stand on Russia’s invasion of Ukraine.

As the situation evolves, will China adjust its relations with Russia and Ukraine, and send some signals at the G20? We shall see.

Ukraine and China became strategic partners in 2011, and Xi and Zelenskyy had spoken on the phone in July 2021. However, the declaration by Chinese foreign ministry officials that there were “no limits” to China’s relationship with Russia put China on the back foot after Russia initiated the war. As the situation evolves, will China adjust its relations with Russia and Ukraine, and send some signals at the G20? We shall see.

At the press conference mentioned above, Biden said, “I don’t think there’s a lot of respect that China has for Russia or Putin… And in fact, they’ve been sort of keeping the distance a little bit.” Whether this is just in Biden’s head or whether it is true, we will find out soon enough.

The G20 meeting will be followed by the APEC summit in Bangkok on 18 and 19 November. Xi and US Vice-President Kamala Harris will attend in person. This will be the first in-person APEC meeting since 2018.

The three major events happening in ASEAN countries are a coincidence of time and place, but the coordination and communication among the ASEAN hosts should not be underestimated. For example, amid the international sabre-rattling, to prepare for the various countries’ attendance at the G20 summit, Jokowi visited Ukraine and Russia in June, and became the first foreign leader to visit China in July following the Beijing Winter Olympics.

With intensifying rivalry between China and the US, the various parties will step up efforts to win over ASEAN, which is an opportunity and a test.

In May, the foreign ministries of Cambodia, Indonesia and Thailand released a joint statement as hosts of the three summits, declaring that “we are determined to work with all our partners and stakeholders to ensure a spirit of cooperation, as we in Southeast Asia continue to strengthen ASEAN centrality, credibility and relevance in maintaining peace and stability in our regional and global endeavours.”

That was a clear statement that even in a climate of uncertainty, outsiders need not try to divide ASEAN, which remains committed to making Southeast Asia a region for cooperation and not competition between the powers.

With intensifying rivalry between China and the US, the various parties will step up efforts to win over ASEAN, which is an opportunity and a test. Amid the perilous international situation, small countries are not helpless, but can still play a role, as clearly evidenced by the season of international diplomacy that is set to happen in this region.

This article was first published in Lianhe Zaobao as "国际外交热季东南亚登场".

Related: ASEAN’s deft diplomacy with its dialogue partners | ASEAN and the G7: Same bed, different dreams | The EU in the Indo-Pacific: A new strategy with implications for ASEAN | The Russia-Ukraine war has accentuated the democratic-autocratic divide | Implications of Xi Jinping resuming overseas trips before 20th Party Congress | Indonesia’s G20 presidency: Carving out a path for developing countries' representation