Russia-Ukraine war: China needs to be wiser and more flexible in its foreign policy

US academic Zhu Zhiqun notes that the international community has been watchful of China’s moves since the outbreak of the war in Ukraine. China’s ambiguous stance, tense relations with the US and failure to actively mediate following the outbreak of the war have caused its international standing to decline. China will need to take a clear position on fundamental issues, as well as do its utmost to bring about peace talks between Ukraine and Russia. 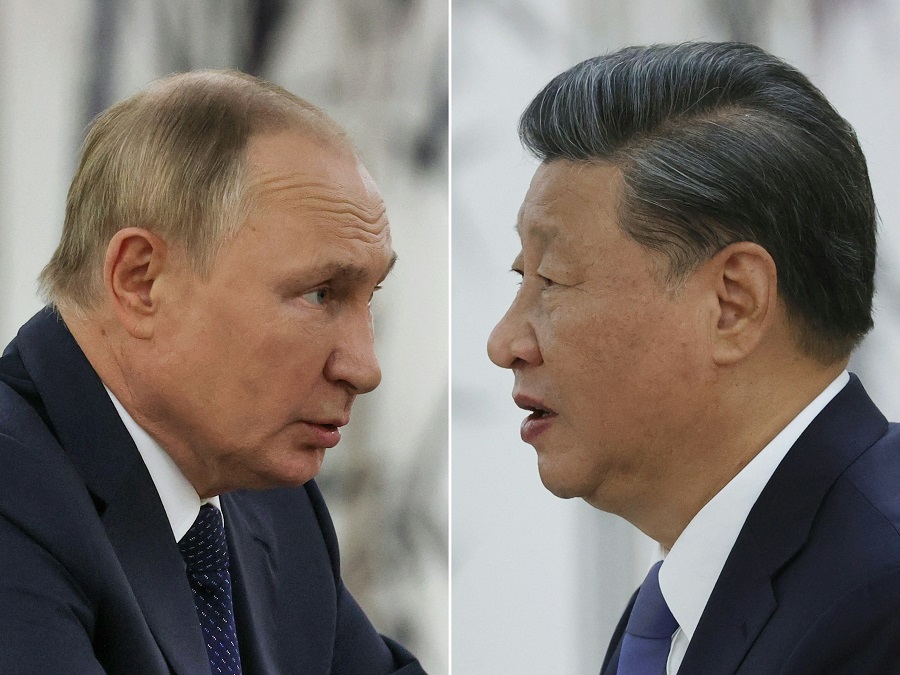 This combination of pictures created on 15 September 2022 shows Russian President Vladimir Putin (left) and China's President Xi Jinping during their meeting on the sidelines of the Shanghai Cooperation Organisation summit in Samarkand, Uzbekistan. (Alexandr Demyanchuk/Sputnik/AFP)

Grace Chong - 30 January 2023
Amid ongoing tensions, a high-level visit by US Secretary of State Antony Blinken to China in the coming week shows hope for improved relations between the two economic powerhouses. Zaobao correspondent Yu Zeyuan notes that while the meeting may not produce practical results, it is a much needed exchange to manage and control China-US relations from worsening.
Read more
Translated by Grace Chong on 17 October 2022

Following Russia’s invasion of Ukraine in February this year, China’s response has been closely watched. Prior to the invasion, Chinese and Russian leaders jointly announced the development of a comprehensive strategic cooperation in a new era of bilateral ties.

There were some who believed that Putin notified Chinese leaders of his plans to invade Ukraine during his trip to attend the Beijing Winter Olympics. Others worried that China would use the opportunity to forcefully reunify with Taiwan. However, subsequent events showed that China did not have prior knowledge of the specifics of Russian intentions, and of course, China did not attack Taiwan.

China’s desire to maintain friendly ties with the two parties involved in the Ukraine war has led it to adopt an ambiguous stance. Instead of addressing specific issues, China chose to reiterate the principles it adheres to. This has cast doubts in the minds of many and garnered much criticism towards the Chinese government.

Following a referendum held at the end of September in Ukrainian territories occupied by its forces, Russia announced the annexation of Luhansk, Donetsk, Kherson and Zaporizhzhia. Russia’s behaviour was widely condemned around the world. UN Secretary-General Antonio Guterres said that the annexation has “no legal value and deserves to be condemned”.

The response did not directly clarify China’s views of the referendum and only emphasised the country’s stand and principles.

The UN Security Council (UNSC) attempted to pass a resolution drafted by Albania and the US to reprimand Russia’s illegal act. Unsurprisingly, Russia used its power as one of the five permanent UNSC members to veto the draft resolution. Notably, among the remaining 14 members, ten voted for the draft, while China, India, Brazil and Gabon abstained.

Following the referendum and annexation of the four Ukrainian territories, the Chinese foreign ministry reiterated China’s clear and consistent position on the Ukraine issue. China believes that all countries deserve respect for their sovereignty and territorial integrity, that the purposes and principles of the UN Charter should be observed, that the legitimate security concerns of any country should be taken seriously, and that support should be given to all efforts that are conducive to peacefully resolving the crisis.

The response did not directly clarify China’s views of the referendum and only emphasised the country’s stand and principles. However, it alluded to the fact that China did not support the referendum organised by Russia and will not recognise the results.

Owing to its tense relationship with the US, China’s bilateral ties with Russia have become even more important. While China will not publicly oppose Russia’s actions, it will also not take Russia’s side completely, especially when it comes to acts that are outright violations of the UN Charter, such as Russia’s invasion of Ukraine and its annexation of Ukrainian territories using a referendum. China’s seemingly at-odds behaviour reflects its dilemma in the Ukraine issue.

Western countries hope to have China’s cooperation to jointly deal with Russia, and thereafter turn their attention back to China. This brand of diplomacy from Western countries is clearly problematic, selfish and arrogant.

China is on friendly terms with both Russia and Ukraine. From the start, China’s balancing act involves emphasising its respect for Ukraine’s sovereignty and territorial integrity, and opting not to condemn Russia for its violation of Ukraine’s sovereignty. At the same time, China also opines that Russia’s security concerns should be respected.

As the Ukraine issue developed, China’s muddled position caused outsiders to feel that it was clearly siding with Russia. Even though China has its strategic considerations, its failure to take a clear position on such fundamental issues, as well as do its utmost to bring about peace talks between both countries, has tainted its international standing.

The latest findings from the Pew Research Center indicate that in Western countries, the proportion of people with negative views of China has risen consecutively in the last few years. Factors such as attempts by Western countries to suppress China, negative reporting of the country by Western media, political developments in China, the Covid-19 pandemic and China’s attitude towards the Ukraine war will continue to affect its international image.

Indeed, it is unrealistic to expect China to publicly admonish Russia given the onslaught it faces from the US and its Western allies. Western countries hope to have China’s cooperation to jointly deal with Russia, and thereafter turn their attention back to China. This brand of diplomacy from Western countries is clearly problematic, selfish and arrogant. The dilemma that China faces in the Ukraine war also reflects the current complexity of international affairs.

China’s failure to actively mediate following the outbreak of the Ukraine war meant that it did not display the leadership expected of a big power and has caused it to lose even more of its right to international discourse.

Western countries have long dominated the international discourse. China’s failure to actively mediate following the outbreak of the Ukraine war meant that it did not display the leadership expected of a big power and has caused it to lose even more of its right to international discourse. Since China enjoys friendly bilateral ties with both Russia and Ukraine, even if it had failed while trying to play an active and visible role in brokering peace between the two, it would have elevated China’s international standing and improved its image.

Public opinion around the world often compares Taiwan to Ukraine. From China’s point of view, there is a great disparity between the two issues both historically and presently, so they should not be mentioned in the same breath.

To safeguard its interests, China should unequivocally reject the referendum that Russia held in Ukrainian territories and uphold the sovereignty and territorial integrity of Ukraine.

A referendum is also not the way to resolve cross-straits tensions between mainland China and Taiwan. If Taiwan were to hold a referendum, it would be unilaterally changing the status quo of cross-straits relations, which the US would also oppose. To safeguard its interests, China should unequivocally reject the referendum that Russia held in Ukrainian territories and uphold the sovereignty and territorial integrity of Ukraine. This would benefit China’s quest to maintain its sovereignty and territorial integrity.

China faces an uphill task to overcome its diplomatic challenges, but merely paying lip service to the notions of “bringing in a new chapter of big power diplomacy” and “facing challenges head-on and fighting resolutely” is definitely insufficient.

When it comes to handling difficult issues such as the war in Ukraine, China needs to be wiser and more flexible in its foreign policy. It needs to proactively make reasonable, beneficial and objective moves to explicitly uphold the UN Charter and promote world peace so as to safeguard China’s interests and improve its international standing.

Related: Will China and Russia join hands to push for an alternative world order? | China's softening stance on its ‘no limits’ relations with Russia | China's response to Ukraine war calls its values into question | 'Ukraine today, Taiwan tomorrow': Should Southeast Asia worry? | Why Taiwan is not Ukraine