China's response to Ukraine war calls its values into question

Hong Kong businessman and political figure Lew Mon-hung notes that China used to have a strong sense of right and wrong, with values of righteousness and morality. However, looking at China’s reaction to the war in Ukraine, it seems that these values have been abandoned. And this can only lead to a shift in the progress that China has made over the past 40 years. 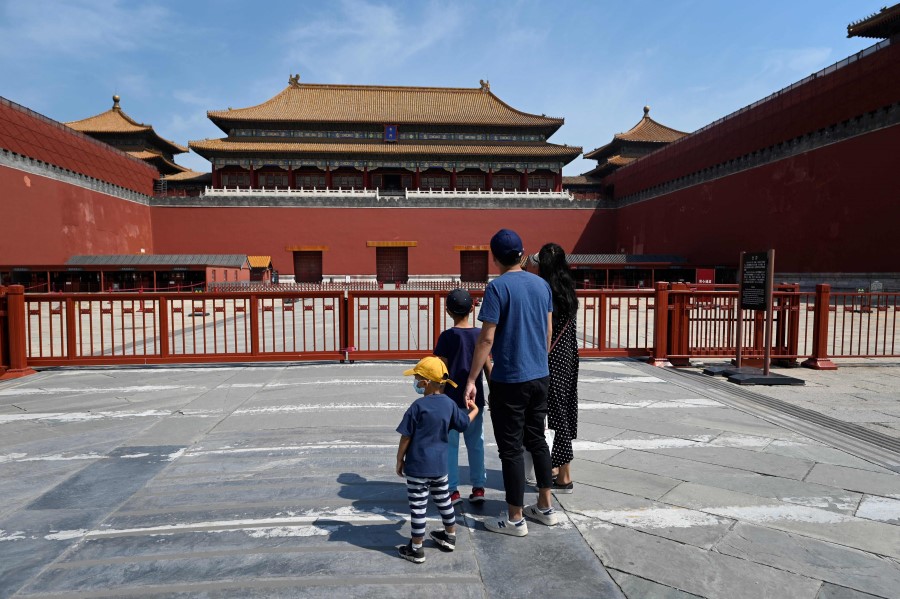 A family looks at the Forbidden City closed due to Covid-19 outbreak in Beijing on 17 May 2022. (Wang Zhao/AFP)

Candice Chan - 5 August 2022
China's "Foundation Plan" for iron ore has gained much official support, and is aimed at reducing reliance on foreign sources of iron, including Africa and Australia. The only way to do this effectively is for China to ramp up mining of its own iron resources. However, these resources are scattered and difficult to access, and of lower grade. This means China has its work cut out if it is to succeed.
Read more
Translated by Candice Chan on 25 May 2022

In some sense, the war in Ukraine is a touchstone of countries’ sense of right and wrong, morals and values.

How did the Chinese people emerge through thousands of years of disasters and still hold their own in the world? One important reason is that since ancient times, it is inherent in Chinese culture to strictly distinguish between “righteousness” (义) and “unrighteousness”. Righteousness is a key element of “morality” (道), where a just cause gains great support while an unjust one gains little.

Going by this criteria, an invasion is unrighteous, and standing up to an invasion is righteous. Based on such values, we admire people like the Song dynasty military general Yue Fei and politician Wen Tianxiang, Ming dynasty official Shi Kefa, and National Revolutionary Army general Zhang Zizhong — these are the heroes that stood up to invasions and represented righteousness.

We despise and detest people like Qin Hui who betrayed Yue Fei, Wu Sangui who was instrumental in the fall of the Ming dynasty, and Wang Jingwei who collaborated with the Japanese during the War of Resistance, because these traitors cooperated with and surrendered to the invaders, and are symbols of unrighteousness.

Indeed, the Chinese people’s basic sense of loyalty and treason, and the universal value of opposing invasions and protecting peace are connected.

During the September 11 attacks in 2001, the Chinese government upheld the universal values of respect for human life, and showed clear and firm support for the US's anti-terrorism campaign. In return, the US supported China’s World Trade Organization membership, allowing China to ride on an integrated globalised economy and rapidly develop into the world’s second largest economy. In some sense, this is the result of China upholding the correct values.

In assessing the war in Ukraine and judging which country is in the right, the general criteria is: one, whether the war is in line with the United Nations (UN) Charter on respecting sovereignty and territorial integrity; two, who instigated the war; three, who first crossed into the other country’s borders, and whose territory the war is being fought on; four, who is causing civilian casualties for the other side; five, whether the people of the invaded country welcome or resist the foreign army; six, how mainstream opinion in the international society defines the war; seven, the majority stand of UN members; and eight, the verdict of the International Court of Justice (ICJ).

Clearly, a value-based assessment would show that Russia’s invasion is not righteous, while Ukraine’s resistance is justified.

Russia invaded Ukraine from land, sea and air on 24 February, indiscriminately bombing major cities in Ukraine including its capital Kyiv, which caused civilian casualties and millions of refugees to lose their homes, not to mention the military actions which caused great atrocities in Bucha. It also threatened human survival and civilisation with the use of nuclear weapons. Unsurprisingly, international opinion, most UN members and the ICJ ruled that Russia was the invader and have denounced it as such, and some countries have imposed heavy international sanctions.

The rest of the world feels that given China’s emphasis that the media is the mouthpiece of the Chinese Communist Party (CCP), and the strong monitoring of online discussions, it is hard to believe that the wave of anti-US, pro-Russia sentiment is not due to the guidance and will of the Chinese authorities.

In their opinion, the rise of a country with such values will only damage rather than build international order and world peace.

Such topsy-turvy values have shocked the international community and will only add fuel to the “China threat” rhetoric. Coupled with the official propaganda that “Karl Marx was right” and China’s shifts in politics, economics, rule of law, society and diplomacy in recent years, Western countries are certain that from the political system to values, the CCP has not given up on “turning the world Red”.

In their opinion, the rise of a country with such values will only damage rather than build international order and world peace. Hence, China’s response to the war in Ukraine is a turning point to abandon all hope for China’s values — from now on, ramping up military defence, gradual economic decoupling, increased diplomatic isolation, and even imposing international sanctions on China like those against Russia will be the way forward.

If China subverts longstanding values for a temporary “strategic partnership” with Russia, it risks changing its own fate and paying an unprecedented heavy price, laying waste to 40 years of reform and opening up. This would definitely be a disruptive historic error, which would wreak unspeakable damage to the sense of right and wrong, moral standards and values of an entire generation of Chinese people.

Worryingly, many people outside of China are embarking on the Great Translation Movement, vowing to translate and disseminate the far-left rantings in China that support Russia’s invasion.

Notably, on 27 April the US House of Representatives passed the AXIS Act (Assessing Xi’s Interference and Subversion Act) with a 394-3 vote, to monitor the economy, finance, trade, military, technology, information and public opinion, and determine whether China is supporting Russia and alleviating the sanctions imposed on Russia by the US and its allies. If any evidence is found, the US will impose strict sanctions and isolate China.

Worryingly, many people outside of China are embarking on the Great Translation Movement, vowing to translate and disseminate the far-left rantings in China that support Russia’s invasion.

How would the international community view China and the values of its people? Without any convincing values, how can the Chinese people stand up among the people of the world?

According to some, Russia entering and breaking up Ukraine is not an “invasion” and should not be denounced, or denouncing it would not improve the situation. Even so-called internet celebrity Li Guangman, who is favoured by the Chinese authorities, has also declared that Russia’s invasion of Ukraine is “a righteous fight against US hegemony”, and has spouted nonsense like “once a war breaks out, Russia is China’s only ally” and “we have to fight shoulder to shoulder”.

Moreover, whoever supports Ukraine and opposes the invasion, or mentions tsarist Russia and Soviet’s history of dividing and occupying China’s territory, is labelled a traitor. Indeed, there is no greater subversion of values.

The response to the Russian invasion of Ukraine reflects the collapse of values and the sense of right and wrong among a significant number of people in China today, reflecting the misaligned backbone of a nation.

According to such logic, the Mukden incident, Marco Polo Bridge incident and Nanjing Massacre in textbooks should then be aligned with the Japanese right-wing’s reinterpretation of the “invasion” of China as “entering”, while the aim of the Greater East Asia Co-Prosperity Sphere was to “drive out US and European colonial forces”? Should history be rewritten in reverse?

Hence, I think this is a most dangerous time for the Chinese people. They have to assess the situation and seize the opportunity to set things right, and get back to the moral high ground of opposing the invasion and protecting peace.

China has to face the fundamental fact that it is Russia that attacked Ukraine rather than the other way round, clearly define Russia as the invader, and draw a line in the sand and denounce Russia’s action, in order to integrate into mainstream peace and development, and avoid sanctions and isolation by the international community.

Otherwise, the reform and opening up, the great rejuvenation of the Chinese nation, the “China Dream” — all this becomes idle talk. A nation whose values have fallen will be spurned by the international community and left without hope.