Are China's youths leaving the internet sector for the public sector?

With the ongoing pandemic and last year's crackdowns on internet giants, some young people are switching tracks and moving from the private sector — especially the internet sector — to the public sector, which is still thought of as a stable career. Will this lead to a loss of talent for the internet sector? Zaobao journalist Liu Liu speaks to young people and academics for their views. 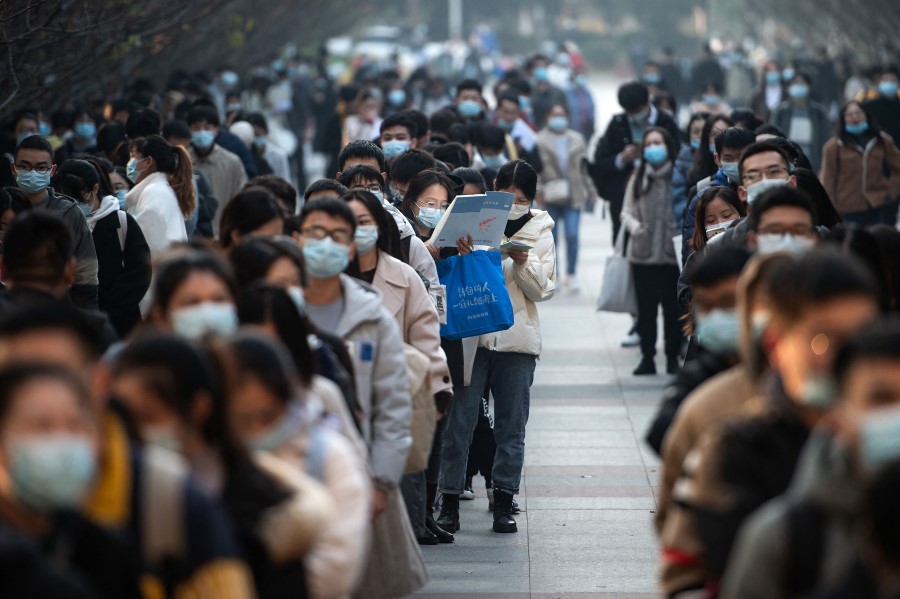 This photo taken on 28 November 2021 shows candidates queueing to take the national examination for admissions to the civil service in Wuhan in China's central Hubei province. (AFP)

Candice Chan - 20 June 2022
The Fujian, China’s third aircraft carrier, was launched on 17 June. The highlight is the electromagnetic catapult system for launching aircraft, which could put it on par with much of the US’s cutting-edge technology in the field. Zaobao correspondent Yu Zeyuan takes a closer look at the implications of this development.
Read more
Translated by Candice Chan on 10 February 2022

Zhang Yunbin (pseudonym), 29, was working for an internet giant in Beijing. After two years of “mind-numbing” work, in 2020 he ended that chapter of his life and returned to his hometown, where he took and passed the civil servant exam.

Zhang told Zaobao that the high pay was one of the main reasons for his initial choice to move to Beijing, as well as to live in a first-tier city.

However, Zhang gradually realised that he lacked a sense of achievement due to the company’s operating model and culture of “involution” (内卷, over-competition). Furthermore, the unattainable housing prices of a first-tier city meant that he did not have a sense of belonging, and so he finally decided to “escape” the company and join the public sector.

...job seekers want stability, with nearly half saying that they “value stability over high pay”...

Figures show that following a short lull period, there has been a rise over the past couple of years in the number of people registering for the national civil service exam, reaching a record high of over 2.02 million in 2022.

A survey in March last year by Zhaopin.com showed that after enduring the pandemic, job seekers want stability, with nearly half saying that they “value stability over high pay”, and nearly 30% are “more inclined towards jobs in the public sector such as state-owned enterprises (SOEs) and public institutions”.

Zhang says that he had the right timing, entering the internet sector at its peak and successfully switching jobs when the civil service exam was not as popular as it is now. He chuckles on the phone, “I’m happy I made this choice.”

In contrast to Zhang, Tan Xinliang (pseudonym) is full of optimism about internet giants. Hailing from Xi’an, Tan recently graduated from the information engineering faculty of a university that was under the now-defunct Project 211 to raise research standards for the 21st century.

Tan, who works in Chengdu at an SOE-backed company, said that young people need to leave the public sector and join major companies to progress further in their careers.

As for the news of large-scale retrenchments at leading companies such as Alibaba, ByteDance and Kuaishou last year, Tan firmly believes that this is good for the sector at large. “Just like how the waves would wash the sand, those that remain are the ones who are truly suitable for the sector,” he says.

Liu Boyi (pseudonym), from a provincial capital in central China, graduated from the University of Glasgow majoring in marketing management. Coming from a family of civil servants, she felt that she was not suited for the public sector and followed her boyfriend — whom she is soon to marry — in choosing the internet sector. However, she is starting to waver.

Liu said that with age and shifting priorities, she does not rule out considering joining the public sector, but the criteria for the civil service exam are strict, with certain requirements for hukou or household registration system. Hence, settling down in a first-tier city calls for further planning.

...these developments do not mean that the internet sector is shrinking; it is merely growing in a different way. - Wang Yanbo, Associate Professor of Strategy and Innovation, University of Hong Kong

Wang Yanbo, associate professor of strategy and innovation at the University of Hong Kong, said that in terms of private companies, the internet sector is still one of the most appealing for young people.

He explained that the concept of the internet today is largely linked to the digital economy, which is the focus of future development.

However, instead of concentrating on programming only, these talents may be required to combine both hardware and software knowledge, and those in cybersecurity might be in higher demand.

Change in growth of internet sector

Wang also notes that from 2018 the internet sector started to improve its framework in line with the industry’s development needs. Meanwhile, the Chinese authorities ramped up regulations in 2019, leading to multiple waves of retrenchments. However, these developments do not mean that the internet sector is shrinking; it is merely growing in a different way.

Wang said that the growth of the internet sector used to be about expanding into new areas of operation, but now it is about building on its base and improving the configuration.

Zhongguancun Institute for Innovation researcher Meng Yu believes that the internet sector is not shrinking but is seeing horizontal and vertical growth within the national economy and society.

She said that the internet has been deeply embedded into China's economy and society, and its content has changed dramatically over the years. It has become the collective sum of IT-centred companies and departments in various industries.

In Meng's view, the movement of people from the internet sector to other sectors, including the public sector, will speed up integration of the various industries, which is not a bad thing from a macro viewpoint.

However, Wang has the opposite view. He believes that a majority of young people moving from private companies to the public sector would lead to a waste of talent to some extent. He says, “Even though talented individuals may still achieve good results when they join the public sector, if they are put in a competitive environment outside, won’t they do better? Definitely.”

Related: A burning issue among Chinese youths: How to escape the rat race? | China to prioritise economic stability ahead of CCP 20th Party Congress | China’s crackdown on cryptocurrencies: Trade-offs between stability and innovation | Painful retrenchments at China’s internet giants