A burning issue among Chinese youths: How to escape the rat race?

The terms “involution” (内卷) and “lying flat” (躺平) are trending these days among young people in China who are speaking out against the intense competition and pressures they face. But how many are actually doing something about it? Zaobao correspondent Yu Zeyuan digs deeper into the social phenomenon. 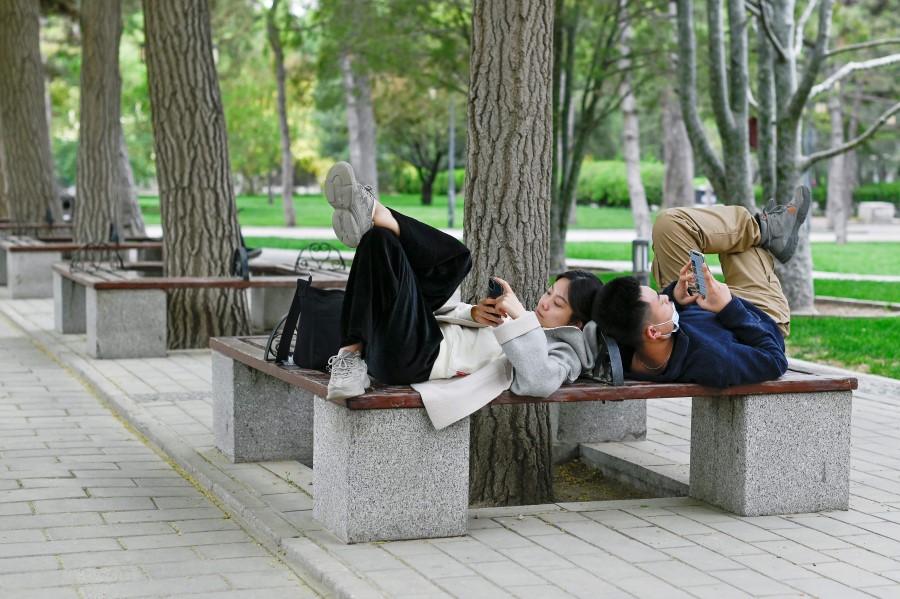 A couple use their mobile phones while sharing a bench at a park in Beijing on 21 April 2021. (Wang Zhao/AFP)

Candice Chan - 30 January 2023
A mall in Shenzhen came under fire for putting up white lanterns with black text as part of its Chinese New Year decorations, while an “ugly” rabbit-shaped light decoration was removed from another mall in Chongqing. Academic Zhang Tiankan muses on tradition and innovation, and the evolution of traditional decorations.
Read more
Translated by Candice Chan on 31 May 2021

The concept of involution, meaning irrational internal competition or “voluntary” competition, started in the universities. The term took off, and made it into the list of top ten most popular terms of 2020.

In recent months, the word involution has moved beyond the ivory tower and gone viral. Many popular vloggers have been exploring its meaning and expansion, and using it to analyse various aspects of society and life. For example, internal competition that limits creativity is involution; competition within and between sectors is involution; not being able to afford a home is involution; primary and secondary school students being forced to take all sorts of extra classes is involution; working overtime is involution; even squeezing onto public transport to get to work in the morning is involution.

In short, whatever pressures and problems the Chinese people are facing today, it is all fundamentally because of involution.

And even as involution is having its moment, the term “lying flat” came out of almost nowhere and became popular among young people.

"Lying flat is the only universal truth. In rest, in sleep, or in death, the moment where a living thing filled with hope and excitement stops and disappears — that is the embodiment of the way it should really be." - Baidu post, “Lying Flat is the Way it Should Be” (躺平即是正义)

“Lying flat” originated from a Baidu post titled “Lying Flat is the Way it Should Be” (躺平即是正义), where the writer “Kind-hearted Traveller” (好心的旅行家) described how he has no stable work or income and meets his basic needs through odd jobs and low spending, thereby avoiding intense competition and easing pressure, to gain a different kind of happiness.

The post reads: “I haven’t had a job for two years, and I don’t feel there’s anything wrong with that. I only have two meals a day — resolve the issue of food and everything is resolved. I control my spending within 200 RMB a month; when I run out of money, I work one or two months a year. Every day I lie around at home or outside, like an idle cat or dog. When I’m in the mood, I get my actor’s pass and go to Hengdian World Studios to lie flat while playing a corpse… Lying flat is the only universal truth. In rest, in sleep, or in death, the moment where a living thing filled with hope and excitement stops and disappears — that is the embodiment of the way it should really be. I choose to lie flat. I am no longer afraid.”

Such philosophical writings resonated with many young people, and netizens dubbed Kind-hearted Traveller the “guru of lying flat”. Suddenly, a group of “lie-flat youth” appeared online, with popular slogans such as “Social ills — I’ll lie flat to that” and “Lie flat for a moment, enjoy it for the moment; lie flat always, enjoy it for always”.

The popular use of the terms “involution” and “lying flat” is a sign of the intense social competition that people are tired of and want to escape from.

Not taking things lying down

In fact, the trend of lying flat and the lie-flat youth did not come up only recently, nor is it unique to China.

Going back to around 2016, there have been many popular terms in China over the years such as “salted fish”, “996”, and “tool”, reflecting the sentiments against competition and pressure.

In Japan, there are the “Three Nos” youths who say no to going overseas, going to work, and going out; some even subscribe to the “Three Nos”’ policy of no energy, no emotions, and no cares. In South Korea, there are the “Three Abandons” crowd who negate falling in love, getting married, and having children or the “Five Abandons” group who additionally denounce owning a house and having interpersonal relationships. To top it off, there are those who let go of seven things in total, including their hopes and dreams.

The popular use of the terms “involution” and “lying flat” is a sign of the intense social competition that people are tired of and want to escape from. Today, Chinese youths generally face the pressures of doing well in school, finding employment, buying a house, getting married, doing well in the workplace, helping their kids excel in their studies and taking care of their aged parents. It is normal that people need a way to vent their frustrations when they are under such great stress.

if all the young people lie flat and become too zen, who will take care of the country’s future? - Michael Yu Minhong, Founder and Chairman, New Oriental Education and Technology Group

However, as Chinese public opinion mainly advocates spreading positive energy, the ethos of lying flat inevitably draws the ire of people who worry about the country and its people.

In a recent article, Associate Professor Li Fengliang of Tsinghua University’s Institute of Education urged the younger generation not to adopt a lying flat mentality just because they detest involution as it would be extremely irresponsible to do so. Not only would they disappoint their parents, they would also be letting flat the hundreds of millions of taxpayers who work hard. This is because tuition fees are only part of the operating funds of institutes of higher education; a large proportion comes from financial appropriations, which comes from taxation.

In a Nanfang Daily article commenting about the article “Lying Flat is the Way it Should Be (躺平即是正义)”, the author stated that choosing to lie flat in the face of pressure is not only not the way it should be, but also shameful, stating that such “toxic chicken soup for the soul” is meaningless. Michael Yu Minhong, founder and chairman of New Oriental Education and Technology Group, also asked at a forum yesterday: if all the young people lie flat and become too zen, who will take care of the country’s future?

Some netizens also pointed out that lying flat represents the uprising and silent protest of contemporary youths against the oppression of capital.

When reality sets in

But these criticisms have garnered even more online support for lying flat. On 28 May, Associate Professor Li’s remark about lying flat being irresponsible behaviour made it to the top ten searches on Weibo. Most netizens disagreed with his comment and emphasised that this Tsinghua University associate professor knew nothing about the suffering of today’s youth. Some netizens also pointed out that lying flat represents the uprising and silent protest of contemporary youths against the oppression of capital.

Whether lying flat is an uprising and protest or not is a subjective matter. In a highly competitive environment, some people will definitely be tired of competing, slogging their lives away and chasing material pursuits beyond what is necessary in life. They would much rather live in a less stressful environment. This group of people exist in all industrialised societies and China is no exception.

Even if lying flat is at odds with mainstream values, everyone should have the right to make a choice. But to most people, it is already difficult to alleviate some of their stress, let alone have zero stress. They may yearn for the freedom and comfort of lying flat, but they are still forced to go about their busy lives. Involution and lying flat are but passing clouds. People would still have to muster up courage to face all sorts of challenges. Otherwise life would be much worse.

Maybe it is like what former US President Donald Trump said: “Perhaps that's the story of life.”

Related: Nationalistic and patriotic? Chinese youths are more than that. | China’s rising property prices have serious social consequences | [Comic] A Chinese youth's search for meaning in life | Is China’s younger generation having it better?