The biggest challenge in China's diplomacy

US-China strategic competition has had an adverse effect on Indo-Pacific tensions, from issues such as Taiwan, the South China Sea, to China-India border conflicts and China-Australia relations. Political scientist Zhu Zhiqun says China’s international and regional outlook will not improve if this underlying issue is not resolved. 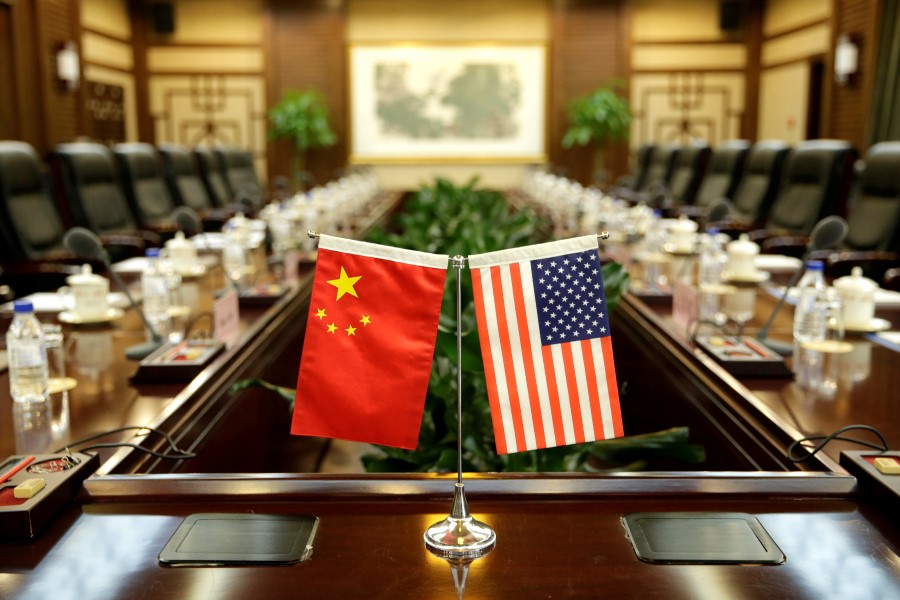 Flags of the United States and China are placed for a meeting between the U.S. secretary of agriculture and China's minister of agriculture at the Ministry of Agriculture in Beijing, China. (Jason Lee/REUTERS)

Candice Chan - 18 October 2021
Southeast Asian responses to the Australia-UK-US (AUKUS) technology-sharing agreement, which aims to provide Australia with nuclear-powered submarines, have varied considerably, from warnings that the agreement could trigger an arms race or undermine regional stability to implicit support. While concerns over arms racing and nuclear proliferation are seen by some as being overblown, AUKUS is a response to China’s rapid military modernisation and assertive behaviour in the maritime domain. Thus, AUKUS can be seen as a wake-up call to ASEAN that it needs to be more proactive on security issues and cannot take its centrality for granted.
Read more
Translated by Candice Chan on 24 September 2020

The coronavirus pandemic has led to major changes in international politics and diplomacy in the year 2020. The recent situation in the Indo-Pacific has been tense, and no matter how one views or analyses each run-in or point of friction, the strategic competition between China and the US looms large.

Nowhere is this more obvious than in the Taiwan Strait and South China Sea. Over the past couple of years, the US has constantly put the Taiwan issue at the forefront of the US-China conflict, through legislation and arms sales, as well as stepping up relations with Taiwan. The Trump administration is well aware that China cannot back off when it comes to Taiwan, but insists on provocatively playing the Taiwan card and crossing the “one China” line, forcing the Beijing government to make concessions.

In the South China Sea (SCS), on the surface the US is concerned with freedom of navigation — but that has never been a problem. What the US is really worried about is China expanding its power in the SCS and Indo-Pacific. Since China started building artificial islands in the SCS, the US has ramped up military activities in the region, while Beijing has not backed off either. Both countries are flexing their muscles in the SCS.

Both India and China have rebuffed active intervention by the Trump administration vis-à-vis its suggestion of mediation... Who would believe the US would be a fair mediator?

Lately, the US has changed its previous neutral stance on the SCS sovereignty dispute, and declared China’s claims as illegal. In particular, at the recent ASEAN-US Foreign Ministers’ Meeting, US Secretary of State Mike Pompeo ignored diplomatic protocol and openly stirred discord by calling on ASEAN to stand up to China’s “bullying”, putting ASEAN countries in a tough spot and casting a pall over ASEAN-China relations.

Other conflicts have also been complicated by the US-China rivalry. For instance, the China-India spat would probably have been kept low-key without US interference. There have been minor frictions along the China-India border for decades, but negotiations have also been ongoing. Both sides have been adapting to each other and have gotten to know each other well. Neither side has any intention to go to war which would be disastrous for both.

While it may be difficult for the generals at the front line to keep themselves in check sometimes, and small clashes may be unavoidable, full-scale war is unlikely. Both India and China have rebuffed active intervention by the Trump administration vis-à-vis its suggestion of mediation, but the US has also announced that it will provide military intelligence to India. What does that mean? Who would believe the US would be a fair mediator?

The US has been trying to get India on its side by raising its status and functions in the Quad, and even wants to bring India into the Five Eyes alliance as the sixth member. Its intention to use India as a check against China is obvious. Some Indian officials and academics are tempted to take this chance to “get” China. Fortunately, many rational Indians think that India should continue to maintain independent diplomacy, and not become a pawn of the US against China without considering the cost.

Then there is also the issue of China-Australia relations, which unfortunately are at their lowest point since diplomatic relations were established in 1972. Australia has been dragged into the US-China competition, being the first to openly support the US’s call for an international investigation into the coronavirus. A comprehensive and objective investigation is necessary, but the focus should not be just on Wuhan while overlooking other places where the coronavirus may have also surfaced in 2019, especially since Trump administration officials are still ranting on about the “Wuhan virus” and “China virus”. The call by the US and Australia clearly has a target in mind. Australia has also largely fallen in line with the US on issues such as the SCS, Hong Kong, Xinjiang, and Huawei.

A former Australian prime minister said in Chinese: “The Australian people stand up.” Stand up against whom?

In late July this year, the Australia-US Ministerial Consultations were held while the coronavirus was peaking in the US and Australia. Given the circumstances, a regular meeting like this could have been held online, but the Australian foreign and defence ministers went to Washington, risking their health and the inconvenience of a 14-day quarantine on their return to Australia. True enough, one of the main points of the meeting was how to coordinate a response to China.

Under US pressure, Australia seems to have lost its independence in diplomacy. What role is Australia preparing to play in the US-China competition? A former Australian prime minister said in Chinese: “The Australian people stand up.” Stand up against whom? The leader said Australia is a country of principles and will not trade in its values. The question is, is Australia consistent in holding on to its principles? For example, when the Trump administration unilaterally withdrew from the Paris Accord and dented global efforts against climate change, did Australia “stand up” to hold to its principles?

Rising tensions in the Indo-Pacific are no good for any country in the region. In the end, US-China relations are not just about the two countries, but have a direct impact on peace and stability in the entire region. When US-China relations are strained, China’s international and regional environment would not improve. This is the biggest challenge in China’s diplomacy.