Can Biden 'set up' the US and Russia against China?

Chinese academic Zhang Jingwei notes that the recent meeting between US President Joe Biden and Russian President Vladimir Putin was a step towards easing US-Russia relations. But fundamental tensions remain, not least due to NATO’s wariness of Russia and the US-China-Russia triangle. 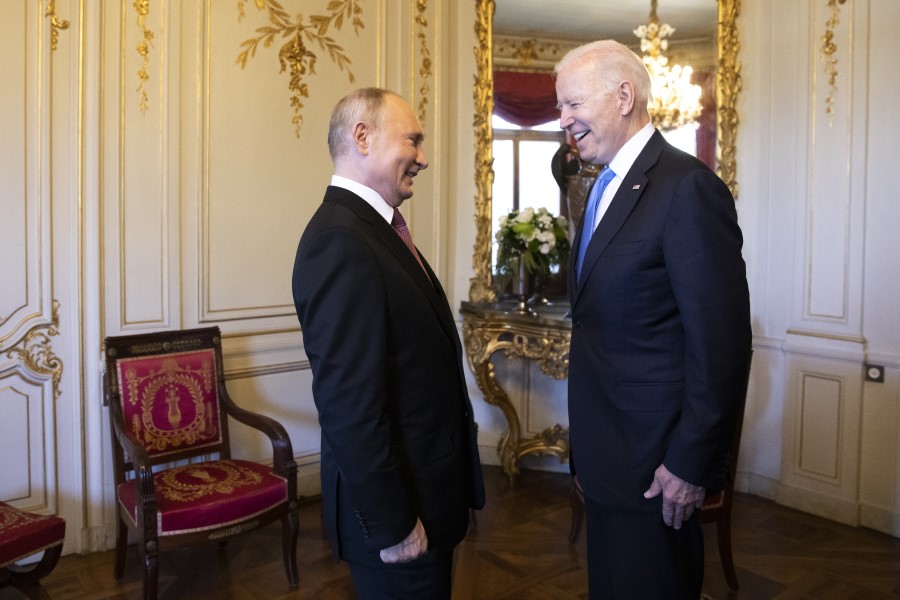 Candice Chan - 29 June 2022
Hong Kong’s incoming Chief Executive John Lee has nominated the next batch of senior officials, who have been duly appointed by China’s State Council. Many “new Hong Kongers” are gradually making their way into politics through various channels, facilitated by the central government in Beijing, who are not satisfied with the pro-establishment camp in Hong Kong. But can these new Hong Kongers show that they have the interests of all Hong Kongers at heart?
Read more
Translated by Candice Chan on 30 June 2021

US President Joe Biden had a meeting with Russian President Vladimir Putin in Geneva recently. It was the last stop on his European trip, but significant nonetheless. The meeting has put out the fuse for tense bilateral relations, at least for now.

The pro-Putin era of Donald Trump did not ease US-Russia relations, but Biden with his anti-Russia sentiments met with Putin within five months of taking office. Initially, there were no plans to issue a statement following the low-key frosty summit, but in the end, there was a brief, succinct joint statement. And in a press conference after the meeting, Biden stressed that the US and Russia as nuclear powers have a “unique responsibility” when it comes to global strategic stability; the joint statement added that both leaders have agreed to carry on a dialogue on this stability.

Putin said the talks were constructive and positive, which was in stark contrast to his high-profile anti-US comments before the meeting. He had high praise for Biden’s grasp of the talks, and straightened any doubts of Biden’s ability to express himself off the cuff. Compared to the meeting between Putin and Trump, this meeting between Putin and Biden was a success. And while personal ties may be poor between both leaders, it has put the brakes on the further deterioration of US-Russia relations.

The success of the meeting is just a temporary respite for both the exhausted parties, a pause in tense US-Russia relations.

This is also an inevitable choice for the two leaders. For Biden, his top mission is to focus his energy to counter China, and a temporary easing of tensions in US-Russia relations would ensure that the US had the bandwidth to continue its duel with China. As for Putin, he is suffering under the continued pressure and sanctions from the US, and hopes for a truce.

The success of the meeting is just a temporary respite for both the exhausted parties, a pause in tense US-Russia relations.

Besides, the meeting might stop the frequent mutual expulsion of diplomats, and ambassadors on both sides might return to their posts according to basic diplomatic rules. This cannot be considered a diplomatic achievement — at most, one can say that the meeting has turned the previously sulky, childish diplomacy between the US and Russia into one of basic decorum.

The biggest result of the meeting is that both leaders actually sat down and talked; even the simplest chat is better than endless tussling. That was the key reason for a low-profile, unscripted meeting.

It will be extremely difficult to thaw US-Russia relations. The conflict did not build up overnight, but is a stubborn systemic problem — despite Trump’s strong personal liking for Putin, he did not manage to repair relations, but the pressure of “Russiagate” started a back and forth multi-front battle.

In an interview with ABC in March, Biden called Putin a “killer”, a veiled reference to him being the mastermind behind the poisoning of Russian opposition leader Alexei Navalny. It is unheard of for the leader of a superpower to use such a term on the leader of another power, but it does reflect the poor personal relations between Biden and Putin, as well as the deep frost in US-Russia relations. Putin responded, “In childhood, when we argued with each other, we said: ‘He who calls names is called that himself.’” He also said: “I wish him good health.”

Biden clearly forgot his rude comment before he met with Putin. When asked about it, Biden laughed and said Putin was “bright” and “tough” and a “worthy adversary”, and hoped that the meeting would be cordial. But this was not a social chat between two old men, but a meeting between the leaders of two adversarial powers — the symbolism of which might fade with fresh disagreements between the US and Russia.

Anti-Russia text accounts for most of the NATO summit statement. In NATO’s view, Russia is the greatest enemy, and NATO chief Jens Stoltenberg said: “We're not entering a new Cold War and China is not our adversary, not our enemy.” But to the US, China is its greatest enemy...

Biden’s European trip can be called a “two-parter”. At the G7 summit and US-EU summit — especially at the former — Biden’s focus was countering China. The G7 statement included text relating to China’s domestic politics, such as Xinjiang, Hong Kong, and Taiwan, as well as finding the source of the coronavirus, strengthening the US position in the East Sea and South China Sea, and a G7 version of a global infrastructure plan targeted at China’s Belt and Road Initiative.

So, the G7 summit in Cornwall is seen as driven by the China issue. But at the NATO summit, countering Russia was the theme for both sides of the Atlantic. And in contrast with the stifled helplessness of the G7’s European members against China, NATO’s voice is firmly anti-Russia.

Anti-Russia text accounts for most of the NATO summit statement. In NATO’s view, Russia is the greatest enemy, and NATO chief Jens Stoltenberg said: “We're not entering a new Cold War and China is not our adversary, not our enemy.” But to the US, China is its greatest enemy, and so it wants to mobilise all the available strength of its global allies to contain China. The strategic stability mentioned in the meeting between Biden and Putin is also seen by analysts as the US and Russia joining forces against China.

What Putin does have is the time to engage in strategic competition with the US president. Biden, with his uncertain prospects and future, can only handle whatever comes.

On either side of the Atlantic, assessments of the main enemy differ in terms of severity and priority, which means that if the US wants to ease relations with Russia, NATO members — especially the “new Europe” countries in middle and eastern Europe — may not be happy.

Between the US and Russia, issues such as the Ukraine, trade, and online attacks remain unresolved, as Biden cannot give in to Russia on any item. Coupled with the strong anti-Russia camp in the US, it is practically impossible for Biden to resolve these longstanding disputes all at once. Besides, Biden is taking each day in the White House as it comes, while Putin’s presidency has been solid for a long time.

Of course, Putin is conscious that Biden’s desire to talk about strategic stability is an opportunistic stratagem. Putin does not want to go against the US, but also does not want to be a US pawn against China. What Putin does have is the time to engage in strategic competition with the US president. Biden, with his uncertain prospects and future, can only handle whatever comes.

Given the current international situation, US-Russia relations will not improve on a fundamental level. The US has developed anxiety disorder over China. However, NATO views Russia as its main enemy, and Europe, caught between China and the US, has kept politics and the economy separate. Clearly, Biden’s “America is back” has been greeted with cheers in the West, but they may not be willing to be cannon fodder against China. Biden wants to manipulate the China-US-Russia triangle, and use the meeting to “set up” the US and Russia against China, but one meeting obviously could not create the “force” for it.

The world is cruel, and big power competition is a perennial theme. Nevertheless, people still hope for more harmony and less fighting among the powers. In this sense, the meeting between Biden and Putin should be acknowledged for nipping the fuse in worsening bilateral relations, at least for now.

Related: Are two camps forming around China and the US? | Will Beijing hinder Moscow's operations in the South China Sea? | Why China and Russia should join forces now