With North Korea’s seventh testing of a nuclear weapon looking imminent, Chinese academic Jin Kai notes that the ROK’s hardened stance and the US’s inconsistent policies are not helping to calm rising tensions in the Korean peninsula. And while it is perceived to hold sway over North Korea, China’s influence over its neighbour may be overrated in truth. 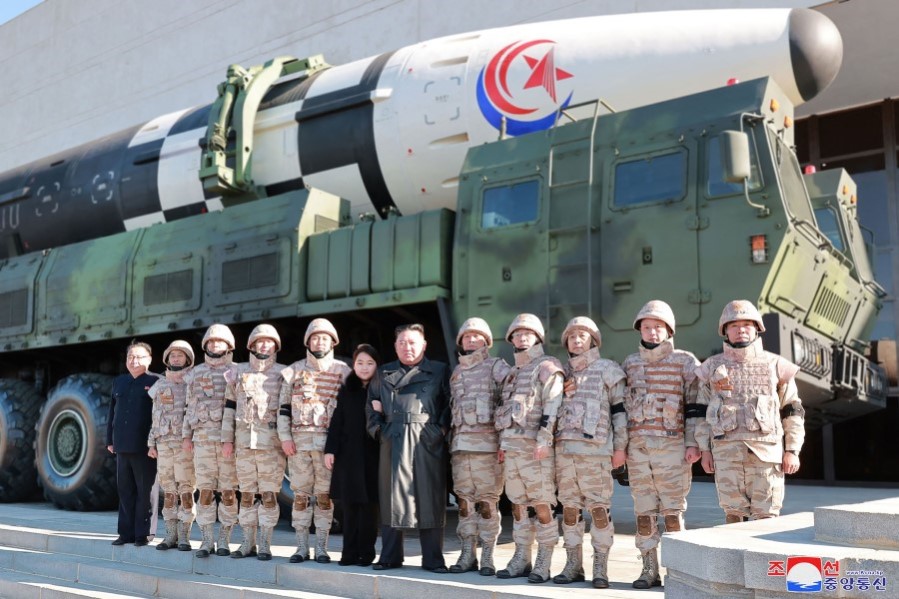 Candice Chan - 30 January 2023
A mall in Shenzhen came under fire for putting up white lanterns with black text as part of its Chinese New Year decorations, while an “ugly” rabbit-shaped light decoration was removed from another mall in Chongqing. Academic Zhang Tiankan muses on tradition and innovation, and the evolution of traditional decorations.
Read more
Translated by Candice Chan on 7 December 2022

After a period of relative calm under the Moon Jae-in administration, the situation on the Korean peninsula has recently shown signs of escalating tensions. The Republic of Korea (ROK), the US, and Japan have increased joint operations against the Democratic People’s Republic of Korea (DPRK), which has increased the intensity of its hardline responses. At this moment, China’s attitude is again under the attention of all sides.

A decade after signalling its intent to do so, the DPRK withdrew from the Treaty on the Non-Proliferation of Nuclear Weapons (NPT) in 2003, disrupting International Atomic Energy Agency (IAEA) monitoring equipment and expelling inspectors. Months later in August 2003, the first round of the Six-Party Talks opened in Beijing. In October 2006, the DPRK conducted its first underground nuclear test, and in a rare move, the Chinese government used the word “blatantly” to openly condemn the test which was conducted near China’s northeastern border.

On 18 November 2022, the DPRK test-fired an intercontinental missile, believed to be the latest ICBM, the Mars-17, on the North Korean side. It landed about 200 kilometres off Japan’s coast, thus once again triggering significant international concerns and new rounds of sanctions.

Meanwhile, the US military has stepped up joint military exercises with ROK and Japan. Furthermore, the US has strengthened its military deployment in East Asia, including upgrading the THAAD system in Seongju County in the ROK, and dispatching high-performance stealth strategic bombers like the B-1B during recent military exercises targeting the DPRK.

China and Russia on its side

In fact, since the first nuclear test in 2006, the UN Security Council has adopted at least 12 resolutions in response to the DPRK’s nuclear and missile activities to impose corresponding sanctions on the country. But when the US pushed for additional UN sanctions against Pyongyang in May this year, it was met with a veto from two permanent members of the Security Council, China and Russia. This suggests a considerable standpoint and policy gap among involved parties, especially between the two major powers, China and the US, on how to resolve the Korean peninsula issue.

... the conservative Yoon Seok-yeol administration, which took office in May 2022, has shown a hardened political stance.

The timing of Washington and Seoul raising the issue of a possible seventh nuclear test in the North is noteworthy, as in the five years from 2017 to 2022, there was a relatively “friendly and peaceful” period under the progressive Moon Jae-in administration. During these five years, the North did not conduct a nuclear test.

On the other hand, the conservative Yoon Seok-yeol administration, which took office in May 2022, has shown a hardened political stance. Moreover, Yoon’s administration has been coordinating and strengthening joint positions and actions with the US and Japan on Pyongyang, including fierce criticism of the North and the resumption of high-intensity joint military exercises with allies.

Given such a background, it is no surprise that Pyongyang has made some strong reactions or “demonstrations”, thus sending the situation into a spiral again.

Meanwhile, regarding further advancing nuclear weapons, there seems to be a kind of “technical need” for a seventh nuclear test. According to Japanese media, Pyongyang has not made significant progress in making its nuclear weapons smaller and lighter. In contrast, progress has been made in their concurrent intercontinental ballistic missile (ICBM) programme both in terms of range and delivery capability.

The US and the DPRK sleepwalking into war?

Amid heightened tensions, many analysts are sizing up China’s response, given the latter's perceived close relations with North Korea. As stated in a press release from the UN General Assembly’s First Committee (i.e., the Committee on Disarmament and International Security) on 28 October 2022, China voted in favour of a draft resolution (L.52) that “would condemn the six nuclear-weapon tests by the Democratic People’s Republic of Korea”.

Some analysts gathered from it that China might be wavering in its support for North Korea. However, there is no need to read too much into China’s vote in favour of this draft resolution as it has actually long been China’s consistent position to insist on the Korean peninsula’s denuclearisation and to promote peace and reconciliation in the Korean peninsula.

Still, some may ask if China will change its consistent stance on the Korean peninsula given the dramatic changes in the global geopolitical landscape.

This question reminds the author of a 2017 New York Times (NYT) interview with William Perry, who was then the US defence secretary of the Bill Clinton administration. In that interview, Perry expressed concern about the escalation of the tense standoff between the DPRK and the US. “In a sense, we are sleepwalking into a war, and I think that’s a dangerous situation,” he said to the NYT.

Except for a few showy but unsubstantial meetings between former US President Donald Trump and Kim Jong-un, we have yet to see any creative policy moves by the Biden administration in promoting US-DPRK rapprochement.

Perry also noted in the interview that the 1999 visit to Pyongyang by a Clinton administration delegation led by him, had the potential to lead to an agreement between Pyongyang and Washington, but then “a funny thing” happened — the George W. Bush administration came to power after the 2001 US election, and the Clinton administration’s policy of maintaining a certain level of “engagement” with the DPRK was almost entirely rejected. Is history repeating itself?

Except for a few showy but unsubstantial meetings between former US President Donald Trump and Kim Jong-un, we have yet to see any creative policy moves by the Biden administration in promoting US-DPRK rapprochement. It has been seen in many regional issues that intensified targeted joint military exercises and continued sanctions cannot fundamentally resolve issues that could only be resolved through diplomatic and dialogue channels.

Well, if it is argued that a seventh nuclear test on the part of the DPRK would be “at the whim of” Beijing, the question is, which of the six nuclear tests conducted by the DPRK in the past were conducted at the “behest” of Beijing? After all, it’s Pyongyang’s call, not Beijing’s, to set off DPRK’s nuclear tests.

China does not necessarily have an unlimited political influence over the decision-making processes in Pyongyang.

Historical liability for DPRK limits Beijing’s policy options in times of regional emergencies, and Beijing may habitually act out of a somewhat self-perceived “obligation” towards DPRK to react differently from the other countries involved. That said, China does not necessarily have an unlimited political influence over the decision-making processes in Pyongyang. The DPRK's withdrawal from the Six-Party Talks can be a good example to prove this.

But in the economic sense, as many believe, China has an irreplaceable influence over DPRK. The problem is that, firstly, Beijing would hardly use its economic influence to its full scale as it could lead to the collapse of the DPRK. Secondly, Pyongyang would hardly yield to such economic pressure as it is still a rather "isolated" economy.

In retrospect, Beijing’s initiative to open the Six-Party Talks was, in part, an attempt to create opportunities and channels for direct dialogue between the US and DPRK. But as I noted in an earlier article, in contrast to Beijing’s consistent policy stance, the overall inconsistency in Washington’s North Korea policy since the 1990s might have generated some unexpected outcomes.

Most recently, while the Biden administration has rejected Donald Trump's “high-profile” policy route, Biden will only agree to engage DPRK if it takes the initiative to give something up, which can hardly happen as DPRK has already declared itself a nuclear-armed country in a legal sense, despite increased sanctions. And in contrast to Trump who actually downsized US military exercises with the ROK, Biden has reopened and even expanded them.

That being the case, China's position on denuclearisation would certainly not change if a seventh nuclear test were to occur.

From China’s perspective, more military drills and targeted sanctions will only increase unease and anxiety on the North Korean side. That being the case, China's position on denuclearisation would certainly not change if a seventh nuclear test were to occur.

Interestingly, in late September 2022, China reached an agreement with the DPRK to reopen their border for the operation of railway freight. This is not very unusual, but it may suggest that China is utilising its economic influence to ease rising anxieties on the North Korean side, even if it may not necessarily influence DPRK’s final decision on the possible seventh test.

To this day, all sides are discussing the possible date rather than the possibility of a seventh nuclear test by the DPRK. The concerns or even fears Perry raised in 2017 seem to be repeating themselves: in the absence of genuinely constructive engagement, are the parties involved again sleepwalking into another war? In other words, why not open up real engagement, dialogue, and reconciliation when it is already known that ceaselessly adding weights to each side of the scale will eventually lead to its total collapse?

In my articles on “empathy diplomacy”, I argue that the long-term solution to tensions in East Asia is for neighbouring countries to start taking each other’s security concerns more seriously. To do so, we might need to revisit the essence of diplomacy, as I do believe that empathy is truly a core part of diplomacy.

Related: Can South Korea’s Yoon and China’s Xi denuclearise North Korea? | What to make of Kim Jong-un's missile launch spree | The world is no longer safe from a nuclear war | The world needs to pay attention to renewed Korean peninsula confrontation