Former journalist Goh Choon Kang observes that whether it is the discussions at the recently concluded Shangri-La Dialogue or the larger machinations of geopolitics, it cannot be denied that having China in the picture changes many things, and perhaps even provides countries with more strategic options. 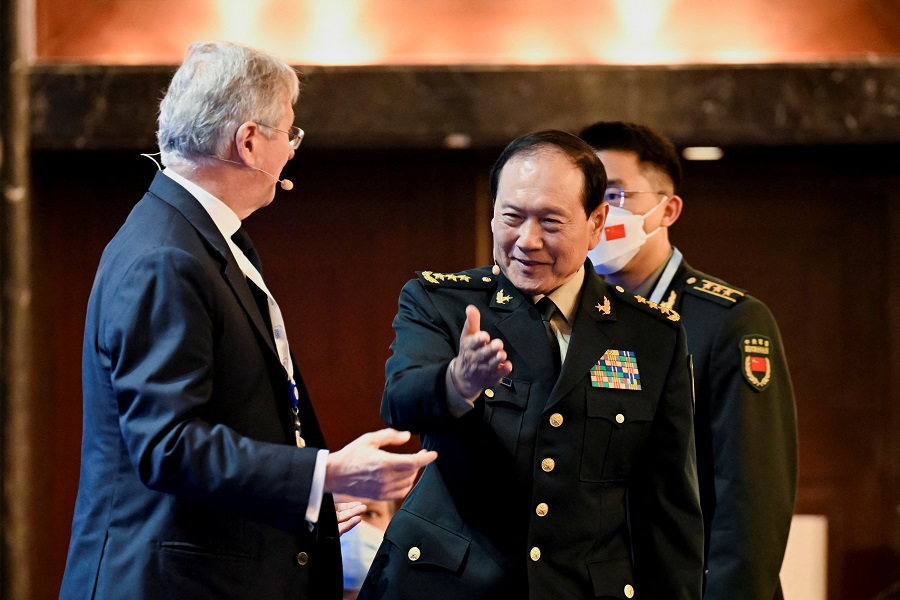 Grace Chong - 5 August 2022
In life as in death, food brings people together and is a means to commune with one another, as seen in rituals during the seventh lunar month or Hungry Ghost Festival. Perhaps in feeding the spirits of the dearly departed, the unknown and indeed their own, people are reminded that an ending is not the end and that the bond between the living and dead is never broken.
Read more
Translated by Grace Chong on 28 June 2022

After a two-year hiatus due to the pandemic, the Shangri-La Dialogue (SLD) was held in Singapore from 10-12 June. From a purely bystanders’ view, it was an exciting event that reiterated the SLD’s role as a major platform for defence diplomacy.

The defence ministers of two of the highest profile powers in the world — China and the US — attended the dialogue in person and had an intense war of words. Various bilateral and multilateral talks on the sidelines also achieved positive results, including the first meeting between the Australian and Chinese defence ministers which probably gave a reprieve after Australia-China relations worsened and stagnated under former Australian Prime Minister Scott Morrison.

Organised by the International Institute for Strategic Studies (IISS), an independent British think tank, the SLD is in its 19th edition since 2002. In terms of regional security and geopolitics, it is certainly a high-profile and valuable platform for security dialogue.

As the Westerners like to put it, “To jaw-jaw is always better than to war-war” — a war of words can be intense but even so, there is no fighting or bloodshed. Everyone is able to express what they have to say, state their bottom lines, clear any misunderstandings and doubts, or even bury the hatchet and enhance mutual trust through face-to-face dialogues.

China takes issue with the US and allies setting the agenda

But at the seventh and last plenary session, Senior Colonel Zhao Xiaozhuo, a researcher at the People’s Liberation Army Academy of Military Science, asked what role the SLD has played in Asia Pacific security over the years. He said, “Some view the Shangri-la Dialogue as positive thinking. It’s a forum bringing high-ranking officials and scholars from this region to improve communication and exchanges. But there are negative views: views [that] the Shangri-la Dialogue, as a forum, [is] dominated by the United States and its allies, serving the interest of the United States and its allies. And also the topics discussed often point to differences, rather than cooperation, and the divergence rather than convergence.”

He specifically asked for the opinions of Singapore’s Defence Minister Ng Eng Hen and IISS director-general and chief executive John Chipman. The defence ministers of Canada and Fiji were also among the panellists taking questions from participants.

“For China, it must decide for itself whether the Shangri-La Dialogue adds value...” - Singapore’s Defence Minister Ng Eng Hen

Ng answered a few questions in one go. He noted the differences between the SLD and the Beijing Xiangshan Forum and said that it was a “matter of taste” sometimes. He explained, “I can imagine that people from the [People’s Liberation Army] come here and find this raucous, a bit rambunctious, [that] this is the Western liberal mode of many ideas, and from this, you're supposed to gain wisdom and they go back and say it was thoroughly discombobulating. That’s entirely understandable.” He added that on the other hand, other people might not like to attend forums that are “too structured, too predictable” as they are “too scripted” and they would rather not “travel a few thousand miles” to attend the event when “the end is already determined”.

He said, “For China, it must decide for itself whether the Shangri-La Dialogue adds value. There is no coercion for you to attend. Is it better? To come to an open platform, to subject yourself sometimes to a tyranny of questions and to what might seem a common view from others to explain yourself? Or to retreat from that engagement? That is something that China must decide for itself.”

Zhao was not questioning the value of the meeting itself, but felt that the agenda was led by the US and its allies. Whether this was the case is up for discussion.

Some found Ng’s response appropriate, while others thought it was too extreme. After all, Singapore was just the host country and not the organiser of the dialogue. However, Ng also said that he would take all feedback seriously.

At a media interview following the plenary session, a reporter asked if China would send lower-ranked delegations in the future or even stop attending the SLD altogether. Ng said the forum was still useful for helping other countries understand China, and that when a defence minister head of delegation says he is a “rocket man” and can understand the destructive power of nuclear weapons, his statements come alive and the discussion can be brought to the next level.

A report in Lianhe Zaobao said China has always seen the SLD as a “banquet at Hongmen” — referring to a banquet held by Xiang Yu for Liu Bei during the Three Kingdoms period, during which Xiang’s advisers tried to persuade him to kill Liu — or a gathering of guests by the West to surround and attack Beijing; but this does not seem to be the case.

For years, China has attended the meeting. Zhao Xiaozhuo has also attended nine times since 2012 as part of the military expert delegation. Chinese State Councilor and Defence Minister Wei Fenghe attended in person for the second time, showing the seriousness with which China takes the session. My personal take is that Zhao was not questioning the value of the meeting itself, but felt that the agenda was led by the US and its allies. Whether this was the case is up for discussion.

However, looking at the six general sessions, besides the defence ministers or representatives from the US, China, Japan, South Korea, Australia, the UK, France and New Zealand, the programme also included speakers from Indonesia, Malaysia, the Philippines, Cambodia, Vietnam, Qatar and Fiji, so “speaking rights” were quite evenly distributed.

The important thing is that while the US keeps playing the Taiwan card, Beijing is using this platform to show the world its red lines.

In any case, this edition of the SLD was lively and exciting, especially the back-and-forth between the Chinese and US defence ministers — sparks flew as these experts traded blows in a rare display. Wei’s firm posture and tone on the Taiwan issue showed the “killer” air of a defence minister with a military background; it would have been intimidating, but whether it will hold off the opponent remains to be seen.

The fact is, the SLD cannot do without China, because it is a factor that no one in the Asia Pacific or even the world can exclude.

The important thing is that while the US keeps playing the Taiwan card, Beijing is using this platform to show the world its red lines. One might say that with the unprecedented intensity of competition between China and the US in the Asia Pacific region, if the US sings solo while China is absent or only sends a low-ranking delegation, the result would be very different.

The fact is, the SLD cannot do without China, because it is a factor that no one in the Asia Pacific or even the world can exclude. Without China, the SLD would be like a stage play without the main character. China’s participation in Asia Pacific affairs is essential — this is a fact that all countries, including the US, have to accept. This applies to the SLD as well as other regional and international affairs.

The China factor is here to stay

One interesting example that immediately comes to mind is the recent actions in the South Pacific islands. These are mostly poor states that are reliant on external assistance — from countries such as the US, Australia and New Zealand — to survive in the middle of the ocean. Australia is near to these islands, and considers the region its backyard.

... the islands are clearly getting help on both sides... Is this not all thanks to China?

The South Pacific was relatively quiet, but in recent years the situation has changed, as China has gotten involved with its vast wealth. In 2019, the Solomon Islands ended diplomatic relations with Taiwan and established relations with Beijing instead, which angered and stunned the US. And not long ago, the Solomon Islands signed a security agreement with China — this time, Australia could not rest easy, and Penny Wong, its new foreign minister, made three trips to the Pacific island states in a few short weeks, showing an unprecedented level of interest in them. National Security Council Indo-Pacific coordinator Kurt Campbell also made a rare visit to these islands at short notice.

Most recently, the US, Australia, New Zealand, the US and Japan announced that they will be starting a new initiative to assist the Pacific island countries and presumably counter China’s influence in the region; the islands are clearly getting help on both sides.

Is this not all thanks to China? A Song dynasty poem says that an ordinary scene of a moon at the window can look different with the addition of plum blossoms; likewise, the South Pacific is different with China’s involvement. In fact, the whole world is very different from decades ago because of China. Hopefully, some politicians with foresight will emerge in the US, who will not insist on pushing the US and China into a Thucydides Trap. Of course, right now, this is still a pipe dream.