While some China observers believe that China has sought to displace America from the regional and global order and possesses a grand strategy in the military, political and economic realms, Indian researcher Hemant Adlakha asks if this sense of threat is a mistaken perception or even a grand illusion. But even as the Chinese repeatedly deny such ambitions, Washington looks set to tighten the noose around Beijing. In such an event, China will be left with no choice but to challenge the US twin strategies of encirclement and containment. 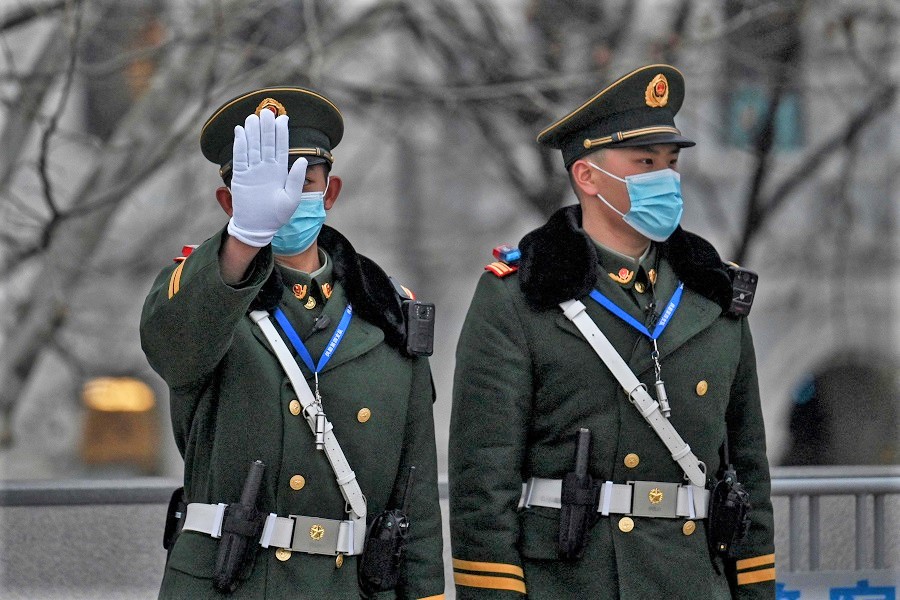 Chinese paramilitary policemen keep watch at the promenade on the Bund along the Huangpu River in Shanghai, China, on 14 February 2022. (Hector Retamal/AFP)

Grace Chong - 27 January 2023
Regulators are ramping up efforts to cull poorly performing firms and those that violate the rules or break the law. A record number of companies got the boot from Chinese mainland stock exchanges last year, and that number could even double in 2023.
Read more
Translated by Grace Chong on 16 February 2022

As a recent article points out, at the heart of the “Great Game” the British and Russian empires schemed and plotted over the control of Central and South Asia during the second half in the nineteenth century, England was certain that the Russians had designs on India. But “after wars were fought, borders drawn, and generations of young [men] met death in desolate passes and lonely posts… in the end, it was all illusion. Russia never planned to challenge British rule in India and the bloody wars settled nothing,” the article noted.

Can it be said that the very premise of the current rivalry or a “Great Game” being played out between the US and China for primacy too is an illusion? Put another way, is China really a threat to the US and possesses a grand strategy to displace American order? And is China, a rising continental Asian power, a (potential) military threat to the US “empire”?

Remember, in a speech in Seattle during his maiden state visit to the US, as if reminding President Obama of the strategic mistake the US was making in its China policy, Xi Jinping addressed the misconception of US-China rivalry: “There is no such thing as the so-called Thucydides Trap in the world. But should major countries time and again make the mistakes of strategic miscalculation, they might create such traps for themselves.”

China is not a military challenge

Or as Henry Kissinger once said, it was not Sun Tzu but Carl von Clausewitz, the leading Western strategic theoretician, who advocated the preparation and conduct of a central battle. Rarely does China risk a winner-takes-all showdown, Kissinger went on to add.

...a consistent and constant theme of China’s US policy has been to remind successive US administrations that Washington has misjudged Beijing’s intentions.

No wonder when the US Senate passed the United States Innovation and Competition Act of 2021 last June, the immediate reaction of China’s National People’s Congress (NPC) was to note that it was not the aggressor, but the one being targeted: “The bill is full of Cold War mentality and ideological prejudice, slanders China’s development path and domestic and foreign policies. Under the banner of ‘innovation and competition’, it interferes in China’s internal affairs and seeks to contain China’s development.”

In addition, recently, in response to comments by the influential US foreign policy voice, Rodger Baker, Stratfor senior vice president for strategic analysis, a Chinese commentator wrote: “Both the Senate and the Congress are consistently and steadily advancing the US grand strategy of ‘comprehensively containing China’s peaceful rise’.” Earlier, Baker in an interview with the Voice of America (in a Mandarin Chinese broadcast) had said: “We have seen that there is bipartisan consensus that China is an important competitor of the United States. Irrespective of who is in majority or who becomes the US president, the bipartisan view will remain unchanged.”

The US has misjudged China

It is important therefore to point out, since Xi became president, a consistent and constant theme of China’s US policy has been to remind successive US administrations that Washington has misjudged Beijing’s intentions.

Last year, on 11 February, in their first telephone conversation since Joe Biden became the US president, Xi Jinping reiterated what he has maintained all through the past nine years as president: “China and the US should re-establish mechanisms for dialogue so that there would be an accurate understanding of each other’s policy intentions.”

Several months later, on 10 September, in their second telephone call, Xi once again emphasised that the US's China policy has for some time "caused serious difficulties in bilateral relations”.

And more recently, in their three-and-half-hour long first (virtual) presidential summit, held on 16 November last year, the Chinese president declared: “The most important event in international relations in the coming 50 years will be for China and the US to find the right way to get along… It is hoped that President Biden will demonstrate political leadership and steer America’s China policy back on the track of reason and pragmatism.”

Lastly, in what is considered Xi’s sternest rejoinder vis-a-vis the US’s China policy and what the BBC called Xi’s “defiant speech” at an event marking the Communist Party’s centenary, Xi said: “We Chinese are a people who uphold justice and are not intimidated by threats of force. As a nation, we have a strong sense of pride and confidence. We have never bullied, oppressed, or subjugated the people of any other country, and we never will. By the same token, we will never allow any foreign force to bully, oppress, or subjugate us. Anyone who would attempt to do so will find themselves on a collision course with a great wall of steel forged by over 1.4 billion Chinese people.”

It all started with Bush, Rice and Cheney

What the CPC and Xi Jinping describe as the mistaken or miscalculated American China policy, can be traced back to the early days of the George W. Bush administration.

In a recent commentary published last month titled “Welcome to the New Cold War”, Michael Klare pointed out that the notion of “encircling” China with hostile powers was first promoted by former Secretary of State Condoleezza Rice in an article in January 2000 in Foreign Affairs when she was the foreign policy adviser to the then Republican candidate George W. Bush.

Klare wrote that Rice had warned of Beijing’s efforts to alter Asia’s balance of power in its own favour. Rice had recommended a robust US military presence in the region and a deepening of cooperation with Japan and South Korea on one hand, and paying a closer attention to India’s role in the regional balance on the other.

That said, there was an abrupt halt to the implementation of this “global playbook” when the Twin Towers in New York and the Pentagon in Washington, DC came under the September 11 terrorist attack in 2001. However, the “enduring lure of encirclement” has remained an integral part of the US China policy ever since.

...the strategy of encircling China and suppressing its growing power soon returned when President Obama announced an American “pivot to Asia”...

But more interestingly, to Kissinger — the architect of Washington-Beijing diplomatic normalisation — this emerging consensus among the US administration, the Congress and the US media that a rising China was becoming the most significant challenge to America’s security, was not only contentious but also wrong.

Disapproving the Bush-Cheney-Rice strategy of encircling China, in a signed article, titled “China: Containment Won’t Work” in June 2005, Kissinger wrote: “China’s emerging role is often compared to that of imperial Germany at the beginning of the 20th century, the implication being that a strategic confrontation is inevitable and that the United States had best prepare for it. That assumption is as dangerous as it is wrong.”

Nonetheless, the strategy of encircling China and suppressing its growing power soon returned when President Obama announced an American “pivot to Asia” aimed at restoring Washington’s dominance in the region. Notably, the pivot or rebalance to Asia was to be intensified in its efforts to contain China by enlisting the support of allies in the region.

However, the policy was heavily criticised as being more hype than substance. While Rice made veiled criticisms of Obama for leading foreign policy “with reluctance” and “from behind”, a senior fellow at the American Enterprise Institute (AEI) accused Obama of total failure in his China policy: “Obama has failed to lead on China… He announced his much hyped ‘pivot to Asia’ that was meant to reassure our allies, but has only done the opposite.” This was in large part because Obama had announced an overall cut of over US$800 billion from US defence programmes, said the AEI Foreign and Defence Policy blog post.

...it is quite evident that the US grand strategy under the Biden presidency is going to be one of simultaneously keeping mounting pressure on China...

Biden will never allow China to catch up to the US

As Klare notes, in the 2,186-page US$768 billion National Defense Authorization Act (NDAA) 2022 which was passed with an overwhelming majority from both political parties and signed into law by President Biden on 27 December, two classic Cold War terms “encirclement” and “containment” are conspicuously missing.

However, in addition to the NDAA, says Klare, there is an extra US$7.1 billion for the Pacific Deterrence Initiative, or PDI, a programme launched last year aimed at bolstering US and allied forces in the Pacific. Thus, consistent with the Bush-Rice-Cheney strategy to contain China, despite whatever it says about peaceful competition with China, the Biden administration has no intention of “allowing China to achieve parity with the United States”.

To be sure, it is quite evident that the US grand strategy under the Biden presidency is going to be one of simultaneously keeping mounting pressure on China by raising the Pentagon budget for preparations for a possible war with China and to keep the State Department’s top priority being to further isolate Beijing diplomatically. This, ominously enough, will leave the CPC leadership for years to come, with no option but to fight back and challenge the US policy of containment.

Related: Xi-Biden virtual summit: Only a 'more polite' meeting | Biden-Xi virtual summit: Not quite a meeting with an ‘old friend’ | With AUKUS in place, now what for key players in the Indo-Pacific? | Biden may need China’s help in Afghanistan