One solution that ended the Vietnam war may provide some lessons for bringing the Afghan war to an end during Biden’s presidency. Forty years ago, the Nixon administration played the China card, enabling Washington to leave the Vietnam war. In the present, a replica of a Vietnam-inspired exodus — one moderated by China and its ally Pakistan — is worth pursuing. China has built relations with all of Afghanistan’s neighbouring countries and has the capacity to build a regional infrastructure and economic network. US academic Ma Haiyun explores the possibilities. 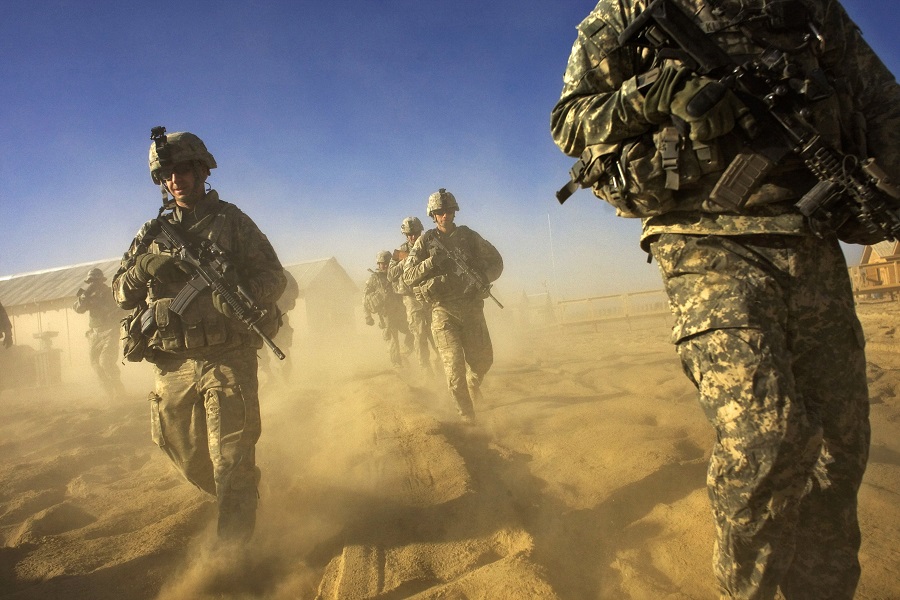 In this file photo taken on 28 November 2008, US Army soliders from 1-506 Infantry Division set out on a patrol in Paktika province, situated along the Afghan-Pakistan border. (David Furst/AFP)

Grace Chong - 23 November 2022
US academic Wu Guo looks at the recent online furore over the mushrooming of state-run communal canteens in China and offers his views from the US. While providing food for the needy should be part of the state's responsibility, there should also be space for civil society, private enterprises and the public to play a role to create kind and healthy communities.
Read more
Translated by Grace Chong on 4 December 2020

Among the messes left by the Trump presidency, Afghanistan is a test case for President-elect Joe Biden to clean up the hasty, last-minute policy measures taken by President Donald J. Trump, who in his last days in office has called for a reduction in US military forces in Afghanistan, after signing a conditional peace deal with the Taliban early this year. A quick peace deal on paper and an abrupt drawdown of the US troops on the ground actually complicates the Biden administration’s negotiating position with the Taliban, in which the Trump government has already “surrendered the mantle of moral leadership”.

The regional context, largely created by Trump’s anti-Iran, anti-China, and to some extent, anti-Pakistan policies, makes it equally hard for Biden to seek regional assistance to end the Afghan war and to rebuild the Afghan economy. Nearly all of Afghanistan’s crucial regional stakeholders have hostile relations with the US under Trump’s presidency. Iran and Russia reportedly offered bounties to kill US troops in Afghanistan. Pakistan’s Parliament condemned Trump’s accusation that Pakistan has been providing safe havens to militant groups. Starting from US-China trade frictions, the new US-China Cold War and the US containment of China is now extending to the new ”Great Game“ in Afghanistan.

Unlike the US, China has built friendly relations with not only all neighbouring countries but also with the direct conflicting parties of Afghanistan, namely, the Taliban and the Kabul regime.

The Afghan war poses a trap for the US just as Vietnam did during the Cold War period. Similarly, one solution that ended the Vietnam war may provide some lessons for bringing the Afghan war to an end during Biden’s presidency.

Forty years ago, the Nixon administration played the China card, enabling Washington to leave the Vietnam war, improve US-China relations, and form a US-China-Pakistan political and security alignment against the Soviet Union in Afghanistan. The US exodus from Vietnam under the assistance of China and luring the Soviets into a Vietnam-style war in Afghanistan paved the way for America to win the Cold War.

As a veteran of foreign affairs, President-elect Joe Biden could not be more familiar with the Vietnam war trap and the US exit strategy. As early as 2009, Biden cautioned President Barack Obama from falling into a Vietnam-like trap, and therefore opposed a US military troop surge in Afghanistan. Biden now needs to find a solution to escape the Vietnam-like trap in Afghanistan for himself. Despite the different ideological origins of the Vietnam and Afghanistan wars, a replica of a Vietnam-inspired exodus — one moderated by China and its ally Pakistan — is worth pursuing.

Unlike the US, China has built friendly relations with not only all neighbouring countries but also with the direct conflicting parties of Afghanistan, namely, the Taliban and the Kabul regime. Furthermore, among Afghanistan’s neighbouring countries, only China has the capacity, experience, and potential to build a regional infrastructure and economic network, which have been welcomed by all countries or parties mentioned above.

To work with China and its ally, Pakistan, on Afghanistan, the Biden presidency first and foremost needs to abandon the dated and flawed Afghanistan-Pakistan approach that mainly viewed the Afghan issue through ethnic-religious lens along the Durand Line separating Pakistan and Afghanistan’s borders. As Obama proclaimed in 2009, the future of Afghanistan is inextricably linked to the future of its neighbour Pakistan. While the Trump Administration followed a similar approach and logic, it emphasised the negative role played by Pakistan. Furthermore, Trump used New Delhi to balance against Islamabad in Afghanistan. However, India’s promise to aid Afghanistan by building regional connectivity, such as the New Silk Road and the Cotton Route, is more about competing with China’s Belt and Road Initiative than assisting in Afghanistan’s economic development.

Ideally, a workable approach to Afghanistan should be Afghan-centred and free of geopolitical competition, and based on the notion that Afghanistan’s neighbouring countries with shared borderlands should be prioritised as the main and direct stakeholders on the Afghan issue, ranging from security arrangement to economic development.

The flawed US approach to Afghanistan, which even incorporates its strategy towards “South and Central Asia”, reveals deep-rooted US geopolitical considerations that deliberately excludes Iran’s role while downplaying China’s potential contributions; yet these are two of Afghanistan’s pivotal neighbours. On the contrary, non-contiguous countries such as India are brought in to nominally solve the Afghan issue; in reality, New Delhi has created new complications.

The erroneous US approach to Afghanistan is making the region a hub for geopolitical competition — and not for economic cooperation and regional connectivity. Several dyads — Pakistan and India, the US and Russia, China and India, and, to a lesser degree, Turkey and Iran — are extending their competition and playing out their rivalry into Afghanistan. Ideally, a workable approach to Afghanistan should be Afghan-centred and free of geopolitical competition, and based on the notion that Afghanistan’s neighbouring countries with shared borderlands should be prioritised as the main and direct stakeholders on the Afghan issue, ranging from security arrangement to economic development.

Abandoning the legacies of the ‘war on terror’

The flawed approach to Afghanistan points to a flawed characterisation of the US war on Afghanistan as a “crusade” or “war on terrorism”. During the Soviet invasion of Afghanistan, Afghan mujahideen, notably including Osama bin Laden, had been freedom fighters and US allies in the 1980s, but later attacked US interests during the latter’s invasion of Iraq in the 1990s. Furthermore, it should be acknowledged that there were no Afghans — but rather Arabs (mostly Saudis) — involved in the September 11, 2001 terrorist attacks in the US. These factors all highlight the Middle East origin of the Afghan war. In the aftermath of the assassination of Osama bin Laden in 2011 and the decimation of Al-Qaeda by 2018, the continued US war in Afghanistan shifted from an “anti-terror war” to a geopolitical proxy war, in which Washington supported the Kabul government against the former Taliban regime.

Kabul’s involvement in trilateral meetings with China and Pakistan, coupled with Beijing’s offers of infrastructure investment to the Taliban, suggest that both Afghan factions and regional countries may be drawn to Chinese economic incentives.

The flawed US “war on terror” in Afghanistan, coupled with “anti-terror” regional cooperation, has generated unprecedented human rights abuses inside and beyond Afghanistan. Reported war crimes committed by the US and Australia in Afghanistan underlie the brutal face of the so-called anti-terror war. The US counter-terrorism cooperation with China since 2001 turns out to be “something close” to genocide in Xinjiang, according to US national security adviser Robert O’Brien. Ending the legacies of the flawed “war on terror” inside and beyond Afghanistan will reduce geopolitical competition, avoid deep involvement into civil wars, and prevent humanitarian crises in the wider region. Doing so would also enhance substantial and precise counter-terrorism cooperation between regional countries that should focus on Afghan-based terrorists such as the Islamic State of Khorasan Province.

Towards an Afghanistan-centred regional economic solution

In the decade to come, bound by domestic laws or bilateral treaties, it is hard to see a US-China compromise on contentious issues such as Taiwan, Hong Kong, and the South China Sea. However, both the US and China share common interests in Afghanistan’s long-term peace and prosperity. Kabul’s involvement in trilateral meetings with China and Pakistan, coupled with Beijing’s offers of infrastructure investment to the Taliban, suggest that both Afghan factions and regional countries may be drawn to Chinese economic incentives.

If the Biden presidency shifts Washington’s approach to Afghanistan from achieving military goals to economic reconstruction, it needs to work with Afghanistan’s neighbouring countries, especially China, to transform the mentalities and mechanisms of existing anti-terror cooperation, such as the Quadrilateral Cooperation and Coordination Mechanism between China, Afghanistan, Tajikistan and Pakistan in the northeast, into an economic connectivity platform. De-militarising the existing regional anti-terror cooperation mechanisms in Afghanistan’s northeast, also means de-politicising the economic corridors in its southwest and northwest, namely the Afghanistan-Iran trade corridor, and the Lapis Lazuli corridor. Thus, an Afghanistan-centered multiple existing economic and trade routes can be integrated to facilitate Afghanistan’s economic reconstruction, without worrying that a single power — such as China — can dominate the "graveyard of empires".

Related: Shifting alliances in the Middle East: Countering the China threat with an Indian Ocean triangle | Deepening China-Iran relations could change global geopolitics | Has Biden bared his fangs at China? | Bumpy ride ahead for US-China relations after the US elections | How terrorism against China in the Middle East could develop