Japanese Prime Minister Yoshihide Suga may have stolen a march on China by making an early move to secure President-elect Joe Biden’s support for any attack on the Senkaku islands or what the Chinese call Diaoyu islands. Even before he enters the White House, Biden seems comfortable reassuring Japan of America’s intention to uphold their commitments under the US-Japan Treaty of Mutual Cooperation and Security. Will this make China more defensive on the one hand, and more eager to court Biden on the other? 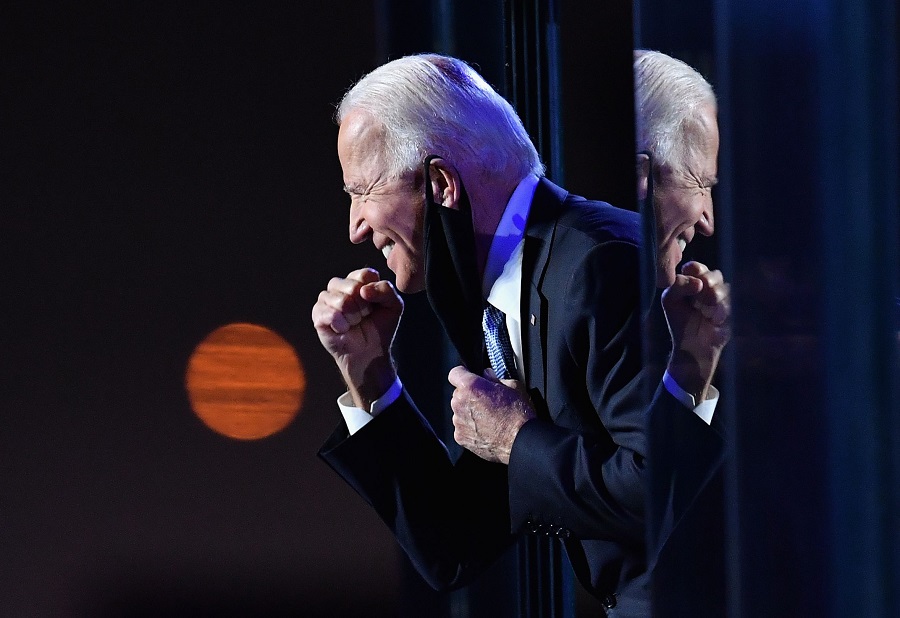 US President-elect Joe Biden gestures to the crowd after he delivered remarks in Wilmington, Delaware, on 7 November 2020. (Angela Weiss/AFP)

Grace Chong - 30 January 2023
Amid ongoing tensions, a high-level visit by US Secretary of State Antony Blinken to China in the coming week shows hope for improved relations between the two economic powerhouses. Zaobao correspondent Yu Zeyuan notes that while the meeting may not produce practical results, it is a much needed exchange to manage and control China-US relations from worsening.
Read more
Translated by Grace Chong on 16 November 2020

It has been over a week since American mainstream media called the US presidential race. Nonetheless, US President-elect Joe Biden’s win is not cast in stone, and current US President Donald Trump is still frantically making counterattacks.

Leaders of some European countries, however, did not wait and rushed to congratulate Biden on his election win. Not to be left behind, Japanese Prime Minister Yoshihide Suga tweeted his congratulatory message to Biden and his running mate Kamala Harris in English and Japanese at midnight on 8 November.

No one anticipated that Biden, who has yet to be inaugurated, would make such a bold move. What was Biden’s intention in doing so?

On 12 November, Suga spoke with Biden on the phone for the first time. He said that Biden had clearly stated that Article 5 of the US-Japan Treaty of Mutual Cooperation and Security would apply to the Senkaku islands (Diaoyu islands to the Chinese). No one anticipated that Biden, who has yet to be inaugurated, would make such a bold move. What was Biden’s intention in doing so?

Article 5 of the US-Japan Treaty of Mutual Cooperation and Security reads: “Each Party recognises that an armed attack against either Party in the territories under the administration of Japan would be dangerous to its own peace and safety and declares that it would act to meet the common danger in accordance with its constitutional provisions and processes.” The issue of whether Article 5 applies to the Senkaku islands has been mentioned in American legislation; senior US officials, including former US President Barack Obama, have also expressed their opinions numerous times.

In an interview just before his visit to Japan in April 2014, Obama stated in clear terms for the first time: “The policy of the United States is clear — the Senkaku islands are administered by Japan and therefore fall within the scope of Article 5 of the US-Japan Treaty of Mutual Cooperation and Security.” When newly-appointed US Secretary of Defence James N. Mattis visited Japan on 3 February 2017 and met with then Japanese Prime Minister Shinzo Abe, both parties jointly acknowledged that Article 5 of the US-Japan Treaty of Mutual Cooperation and Security applied to the Senkaku Islands. At the press conference conducted the next day, Mattis reiterated that “the United States will continue to recognise Japanese administration of the islands, and as such article five of the US-Japan Security Treaty applies”.

In response, Chinese foreign ministry spokespersons have reiterated multiple times that China views these remarks with grave concern and strongly objects to the positions put across. They assert that the Senkaku islands and their affiliated islands are an intrinsic part of China’s territory. In addition, regardless of what people say or do, this remains an indisputable fact and will not shake China's determination and will to safeguard its national sovereignty and territorial integrity.

In 2011, then US Vice President Biden had only good things to say when he visited Nanluoguxiang in Beijing and tried the traditional Beijing snack of fried liver (炒肝 chaogan) at a restaurant. But it would be naive to think that Biden is “pro-China” or a “good friend” or “old friend” of China because of this.

If the US wants to form an anti-China alliance, Japan will not say no.

Biden will make sure that the US ‘gets tough with China’

During the Obama administration, while China-US relations looked calm on the surface, there were hostile undercurrents. The so-called “pivot to Asia” was actually aimed at containing China — the US’s ambitions were clear for all to see. As we all know, Biden was one of the few US vice presidents in America’s history who had a great say in policy. He undoubtedly would have made an indispensable contribution to the formulation of the US’s China policy during the Obama administration.

During the 2020 election campaign, Biden expressed his concern over China’s rapid rise in the economic and military aspects, asserting that the US “does need to get tough with China”. What is particularly absurd is that he even criticised Trump for being soft on China. Based on the worries and anxieties of the ruling and opposition parties in the US over China’s rise, Biden will continue to be tough on China after taking office.

Based on post-war history, the extent that the US and Japan could go in taking joint efforts to contain and oppose China would be of little surprise. While Abe resigned due to health reasons, instead of recuperating in peace, he instead revealed, rather smugly, that he was the one who persuaded Trump to take a tough and aggressive stance towards China. Instead of saying that Abe was the one who advised Trump on what he could do to contain China, it is more fitting to say that they each had their interests in mind and had the same goal. If the US wants to form an anti-China alliance, Japan will not say no. China does not, and should not have any false hopes regarding either the US or Japan’s China policy. On the contrary, China should be fully prepared for suppression and containment by the US and Japan in the long term.

Suppression and containment in a bid to delay or even hinder China’s rise and development will continue to be central to the US’s China policy under the Biden administration...

In the wise words of Henry Kissinger, China-US relations can never return to its past state. It can be expected that while Biden will make many adjustments to US foreign policy when he takes office early next year, his strategic goals towards China will remain unchanged. Suppression and containment in a bid to delay or even hinder China’s rise and development will continue to be central to the US’s China policy under the Biden administration, even if Biden’s approach may be different from Trump’s.

As said earlier, senior US officials have affirmed on multiple occasions that Article 5 of the US-Japan Treaty of Mutual Cooperation and Security applies to the Senkaku islands. However, even before Biden is inaugurated as president, he is already eager to touch on sensitive issues in China-Japan and China-US relations, and has openly expressed his stance on the Senkaku islands. Biden has started to bare his fangs at China, and it most certainly will not be his last time doing so.

Related: Bumpy ride ahead for US-China relations after the US elections | Biden presidency a turning point for China-US relations? | Japanese academic: China stoking tensions in East China Sea | The bleak future of China-Japan relations in post-Abe era | Quad: Containing China should not be the raison d’être for any grouping