Zaobao correspondent Yu Zeyuan says that while US President-elect Joe Biden will have his hands full with domestic issues when he assumes office, at the very least, his approach to US-China relations will be less antagonistic than that of his predecessor’s. That in itself leaves room for the relationship to move forward from ground zero. 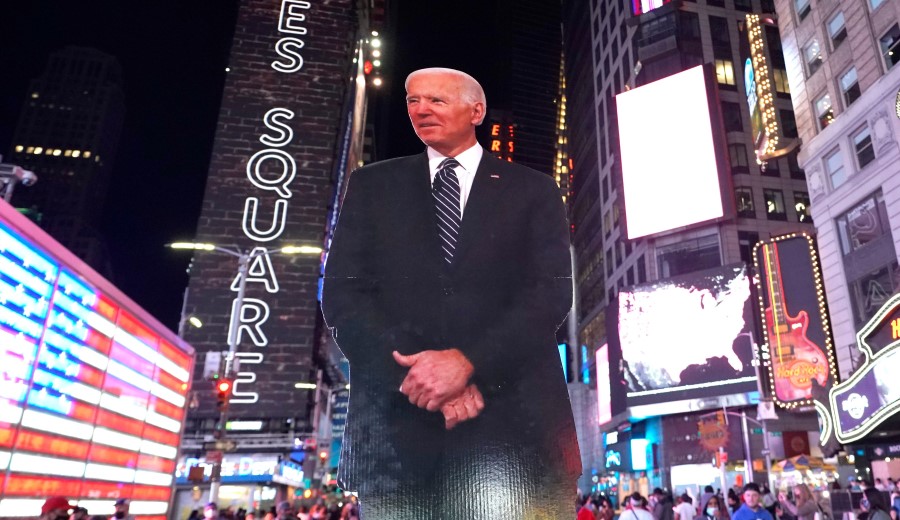 People celebrate at Times Square in New York after Joe Biden was declared winner of the 2020 presidential election on 7 November 2020. (Timothy A. Clary/AFP)

Candice Chan - 29 June 2022
Over the past couple of years, there has been an influx of migrants from Hong Kong to the UK. Communities have been forming in various cities, such as London and Manchester. And as Hong Kongers find jobs and settle in, the British way of life rubs off on them. But underneath all that, they remain Hong Kongers at heart.
Read more
Translated by Candice Chan on 9 November 2020

The dust has finally settled on the eventful US presidential election, with 77-year-old Joe Biden set to move into the White House early next year. The eyes of China and the world are now focused on whether China-US relations will improve from a low point that has lasted over two years.

Over the past four years, US President Donald Trump, who is a businessman by profession, has flown the flag of America First. Like a bull in a china shop, he has smashed traditional international relations to bits, especially China-US relations. Since 2018, China-US relations have taken a nosedive. Particularly after the coronavirus outbreak, relations worsened with the tussle spreading to politics, trade, technology, and culture, and even the risk of military conflict.

Many people feel that in the context of a gradually changing global situation given China’s rise, no matter who the US president is, the US will not continue to let China “prosper quietly” and do nothing about it. To strengthen its position as the world’s “big brother”, the US will try and contain this world “number two”. So, even if Biden takes office, China-US relations will not go back to the way they were.

If Biden changes the current “confrontation without cooperation” to some form of competition with cooperation, that would be in line with what China wants, and would be in the interests of the US and most other countries.

Some China academics and internet heavyweights have been saying that Biden may bring the US and its Western allies together to contain China, and have called on people not to imagine that Biden will improve China-US relations, or to expect an improvement in relations.

Common interests of the US and China easily overlooked

These comments do make sense. However, this view that China-US relations will not improve or may even deteriorate no matter who takes office is as good as saying that China and the US are destined not to get along, or even to fight it out. That seems exaggerated, and may not be how China-US relations will turn out. Specifically, this view focuses only on the differences between China and the US, while overlooking the many common interests between the two.

As the two largest economies in the world, which are mutually entwined, China and the US are not and should not be enemies that fight to the death. The fact is that a long-term standoff between China and the US would not be good for either side, nor would it help to fight the pandemic and restore the economy. If Biden changes the current “confrontation without cooperation” to some form of competition with cooperation, that would be in line with what China wants, and would be in the interests of the US and most other countries.

From Biden’s recent comments, his position on China is different from Trump’s. Late last month, Biden reiterated to the media that China is not the greatest threat to the US, but its main competitor. This is a clear difference from the Trump administration’s positioning of China over the past two years as an adversary and advocating an all-out containment approach.

In the March/April issue of Foreign Affairs magazine, Biden wrote that even as the US and its partners “confront China’s abusive behaviours and human rights violations”, they would “seek to cooperate” with Beijing on issues of common interest, “such as climate change, nonproliferation, and global health security”. Since the start of his campaign, Biden has said several times that he does not want to resolve China-US trade disputes through a trade war, and even that he will drop the US’s additional tariffs on China.

This shows that Biden believes that there will still be much room for cooperation between China and the US even if strategic competition between both countries intensifies. Ultimately, China-US relations remain one that is both cooperative and competitive.

At the same time, Biden had visited China numerous times in his capacity as chairman of the Senate Foreign Relations Committee and vice-president of the US. He has also had relatively good exchanges with the current Chinese leader and supported the setting up of the US-China Strategic and Economic Dialogue mechanism. While this does not mean that Biden would have a good relationship with China’s top leaders as the president of the US, he is likely to resume necessary communications between China and the US and not adopt the aggressive stance of completely decoupling from China.

Additionally, several China hawks such as Secretary of State Mike Pompeo and White House trade adviser Peter Navarro ruled the roost in the Trump administration. Hopefully, this will change when Biden takes office. Advocating the establishment of a China-US relationship that is both competitive and cooperative could become the key theme taken forward by Biden's foreign policy team.

Better relationship under a new team?

Based on US media analyses, Susan Rice, former national security adviser under President Barack Obama, may become the secretary of state under the Biden administration. Although she has taken a tough stance against China on human rights issues, she believes that despite increasing global competition between China and the US, both countries still have common interests in many areas.

Antony Blinken, senior foreign policy advisor for the Biden campaign, may also hold an important position in the Biden administration. Blinken opposes unilateralism and trade protectionism and believes that a full decoupling from China “is unrealistic and ultimately counterproductive”. He thinks that the US should instead safeguard its leadership role in setting international rules and norms. Apart from competing with each other, China and the US could also cooperate in areas such as climate change, non-proliferation, and global health.

Undoubtedly, Biden will first face a series of tough challenges such as bridging domestic divisions, handling the pandemic, and facilitating economic recovery when he takes office. Foreign policy will not be his priority.

Kurt Campbell, former assistant secretary of state for East Asian and Pacific affairs in the Obama administration, may also become an important member of Biden’s foreign policy team. Campbell thinks that the US should focus on Asia-Pacific but at the same time come to terms with the fact that the US’s military dominance in the Asia-Pacific region may be succeeded by others in the future. In addition, he is for the US and China establishing a crisis management mechanism for the South China Sea issue to reduce the risk of making misjudgements. On the Taiwan Strait issue, he believes that not changing the status quo unilaterally could be the best strategy. Lastly, he believes that the US and China should cooperate in the areas of pandemic prevention and control, climate change, and so on.

Undoubtedly, Biden will first face a series of tough challenges such as bridging domestic divisions, handling the pandemic, and facilitating economic recovery when he takes office. Foreign policy will not be his priority. However, a Biden presidency is at least a turning point for a China-US relation that is already at its lowest point. As for the future of China-US relations, while one should not be too optimistic, there is no need to be too pessimistic either.

Related: China's preferred choice: Trump or Biden? | A win for Biden is a win for China? | How a Biden presidency can win back lost American influence in Southeast Asia | Bumpy ride ahead for US-China relations after the US elections