China’s efforts at Islamic diplomacy — including providing scholarships for Indonesian students and inviting leaders of Islamic organisations to visit China — seem to be paying off, at least in producing young academics like Novi Basuki, who has been defending China’s actions in Xinjiang. NTU academic Leo Suryadinata tells us more. 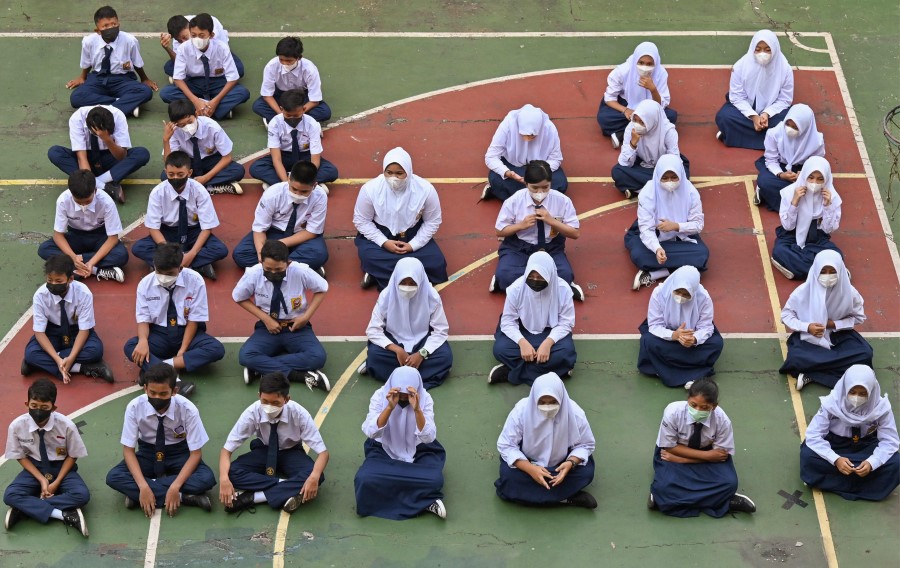 Students gather as schools transition to in-classroom teaching amid the Covid-19 coronavirus pandemic in Jakarta on 3 January 2022. (Adek Berry/AFP)

Candice Chan - 23 November 2022
Zaobao journalist Miao Zong-Han takes a closer look at voter fatigue in Taiwan in the upcoming “nine-in-one” elections, caused mostly by the arguing over plagiarism allegations, which might interest the highly educated but bore the average voter. Another question is whether the atmosphere at these elections will be a good indicator of things to come in the 2024 general election.
Read more
Translated by Candice Chan on 7 February 2022

Recently, Indonesian online media DetikNews ran a commentary in Bahasa Indonesia titled “Uighur dan Pemboikotan Olimpiade Beijing” (“The Uighurs and the Boycott of the Beijing Olympics”), by Novi Basuki, a young writer and social media editor, and a santri, or student of Islam.

In this article that was reproduced in some other media, Novi noted that the US, the UK, Canada and Australia have announced diplomatic boycotts of this year’s Beijing Winter Olympics because of China’s “genocide” of the Uighurs in Xinjiang.

Novi said the allegations of genocide originated from the recent “Uyghur Tribunal” in London, organised by the civic group World Uyghur Congress, which claims to be an independent organisation. However, Novi noted that it is funded by the National Endowment for Democracy in the US, which in turn has links to the Central Intelligence Agency (CIA).

In another article, Novi alleged that the Uyghur Tribunal was an “intelligence operation”.

According to Novi, the Uyghur Tribunal tapped on the research of veteran anti-Communist researcher Adrian Zenz, who previously gathered intelligence on Xinjiang, generally from the local government there.

Zenz claimed that the Chinese government implemented a strict birth control plan on the Uighurs, causing a plunge in the Uyghur population since 2018, which is no different from genocide.

Novi feels this is untrue, citing figures from China to show that the Uighur population in Xinjiang was 8.34 million in 2018, and 11.62 million in 2020. In other words, the fertility rate for Uighurs was 1.71%, as opposed to the much lower figure of just 0.83% for the Han ethnic group.

Novi said according to these figures, the allegations of genocide against Uighurs was “baseless”. He also claimed that the diplomatic boycott by the US and its three allies goes against the spirit of the Olympics, because “Olympism” represents justice and friendship; as for human rights, Basuki said taking part in the sports meet was also a form of “human rights”.

Who is Novi Basuki?

Novi Basuki was born on 11 September 1993 to a family in a farming village in Situbondo Regency, East Java, where his father ran a small provision shop. Novi studied in a pesantren (a boarding school for classical Islamic studies) in the village, and subsequently attended another pesantren in Probolinggo for his high school studies, where he began studying the Chinese language for three years under a teacher from China.

This teacher gave Novi the Chinese name Wang Xiaoming (王小明). On graduating from the pesantren, Basuki was awarded an arts scholarship from the Chinese government to study at Huaqiao University in Fujian province, where he read Chinese language and culture for three years. After graduating, he got a scholarship from Xiamen University, where he read Southeast Asian history and politics for another three years and got his master’s degree. Subsequently, he did his doctorate at Sun Yat-sen University in international relations, spending nearly four years on course work and research. He has now started writing his thesis in Chinese.

He studied in China for ten years, being able to read, write and speak Chinese fluently.

In 2020, he returned to Indonesia and published a book titled Islam di China: Dulu dan Kini (Islam in China: Then and Now) with Penerbit Buku Kompas, which gained attention. Previously, he also published a collection of essays on Chinese politics and religion, titled Ada Apa Dengan China? (What Happened in China?).

Novi has said that many Indonesians still see China with a Cold War mindset. Through his platform, he hopes to present another side of China, to give readers a choice.

Over the past couple of years, he has participated in several online talks and taken many interviews, where he spoke freely about what he knew of China and Islam in China. In stark contrast with the older generation of Western-educated Indonesian academics, he attracted a large viewership with his videos.

Last year, Novi set up his own social media platform Aseng.id, where he has posted many commentaries on China’s social culture and politics, and on Chinese Indonesians. Apart from his own essays, the platform also carries essays by other writers about China and Chinese people.

Novi has said that many Indonesians still see China with a Cold War mindset. Through his platform, he hopes to present another side of China, to give readers a choice. He said that people may not agree with the views in these articles, but they are “progressive” contemporary perspectives.

Previously, most local-born Indonesian students went to Western universities for further education, initially in Western European countries like the Netherlands, the UK and Germany, and then subsequently the US and Australia.

Pesantren heads were happy to send their students to China, because the latter advocated moderate Islam.

According to data from the Indonesian embassy in Beijing, there were 15,760 Indonesian students in China in 2019 — many from pesantrens — spread over the universities and technical institutes in China. Pesantren heads were happy to send their students to China, because the latter advocated moderate Islam.

So far, there is no confirmed number of Indonesian pesantren students studying in China. However, according to a survey, pesantren students in China do not study Islam, but take non-Islamic courses. Some study Chinese language and culture, while some study social sciences or business management and technical courses.

In the China-US strategic competition, not all the Indonesian students educated in China will lean towards China, but most would support China or at least remain neutral.

It is worth noting that these students’ essays do not touch on China and the South China Sea, or its disputes with Indonesia. When these students return to Indonesia, some work in Chinese companies in Indonesia, while some go back to their own community or the education sector, or work in private companies.

Not many Indonesians study in China at the moment compared to other countries, but the number is growing rapidly. Their views on China will be a challenge for the Western-educated, pro-West Indonesian students.

In any case, these Indonesians who study in China know the Chinese language and have direct contact with China, and so they often raise views that are different from Western-educated Indonesian students, or are even oppositional.

Not many Indonesians study in China at the moment compared to other countries, but the number is growing rapidly. Their views on China will be a challenge for the Western-educated, pro-West Indonesian students.

In fact, China started its Islamic diplomacy with Indonesia in the early 21st century. China gave out scholarships to Indonesian Muslim students, especially those in pesantrens, to study in tertiary institutions in China, and sent teachers to pesantrens to teach the Chinese language, while inviting Indonesian Muslim leaders to visit China.

China also started to embark on joint projects with the Indonesian Muslim community. In 2018, when the Xinjiang Uighur issue surfaced, the Wall Street Journal alleged that China had given strong financial support to major Islamic organisations in Indonesia (Nahdlatul Ulama and Muhammadiyah), so that their leaders would keep quiet about the Xinjiang issue — however, the leaders of these two groups have vehemently denied these claims.

The fact is, in the China-US strategic competition, both China and the US are targeting the support of Islamic organisations. But why is China’s Islamic diplomacy in Indonesia seeing results, while US efforts are not? Are there deeper, more complex reasons? This is another question for another day.

Related: Why Indonesia's Muslim organisations are not critical of China's Xinjiang policy | Is there a genocide in Xinjiang? | Xinjiang — the new Palestinian issue? | Will the West boycott Beijing's Winter Olympics over Xinjiang? | Battling atheist China: US highlights Xinjiang issue and religious freedom in Indo-Pacific region