The West has often criticised China for what it calls human rights abuses and violations in regions such as Xinjiang, even going so far as to call for the 2022 Winter Olympics to be shifted away from Beijing. And as his parting salvo, former US Secretary of State Mike stated that China has committed “genocide and crimes of humanity in Xinjiang". What are the implications of the word “genocide” and why is it being tiptoed around? Zaobao associate editor Han Yong Hong says that while China needs to be more transparent about what's happening in Xinjiang, the Chinese government's single-minded push to "educate" the Uighurs may not be equivalent to a "genocide". 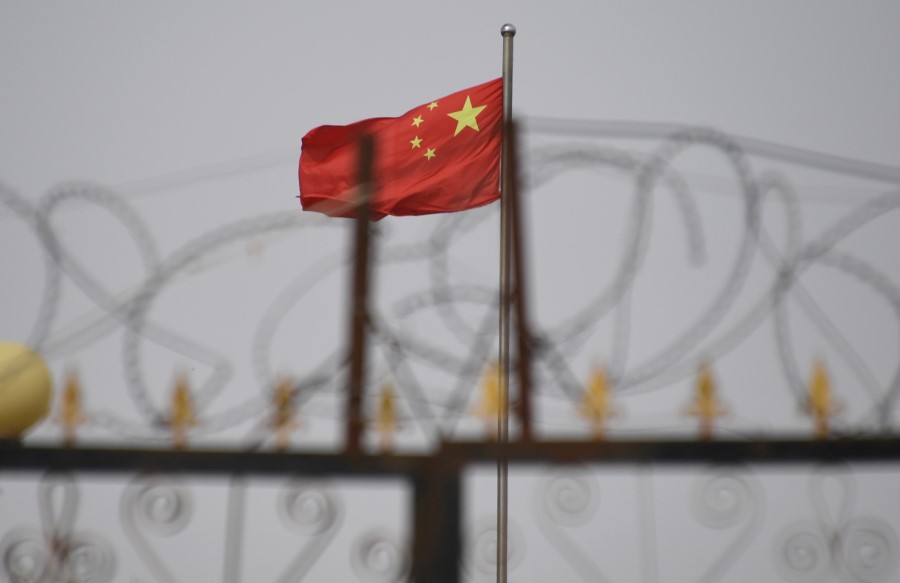 This file photo taken on 4 June 2019 shows the Chinese flag behind razor wire at a housing compound in Yangisar, south of Kashgar, in China's western Xinjiang region. - The US will seize all imports of tomato and cotton products from China's Xinjiang region due to the use of forced labor, the Customs and Border protection agency announced on 13 January 2021. (Greg Baker/AFP)

Candice Chan - 30 January 2023
A mall in Shenzhen came under fire for putting up white lanterns with black text as part of its Chinese New Year decorations, while an “ugly” rabbit-shaped light decoration was removed from another mall in Chongqing. Academic Zhang Tiankan muses on tradition and innovation, and the evolution of traditional decorations.
Read more
Translated by Candice Chan on 19 February 2021

Last week, US President Joe Biden and Chinese President Xi Jinping finally spoke with each other. Soon after the conversation, the Xinjiang issue, which has been closely watched by the West, flared up again.

It all started when Biden appeared on a CNN town hall session hosted by Anderson Cooper on 16 February. According to a White House transcript, in replying to questions from Cooper about his phone conversation with Xi and the human rights issues in Xinjiang, Biden said: “Well, there will be repercussions for China, and he knows that.  What I’m doing is making clear that we, in fact, are going to continue to reassert our role as spokespersons for human rights at the UN and other — other agencies that have an impact on their attitude.”

His short comments were widely reported, with most international media focusing on Biden’s tough stance and interpreting it as a warning to China that it will “pay the price” for the human rights issues in Xinjiang. However, if one watched the CNN clip, one would find that Biden was in fact holding back and doing his best to stick to the facts in explaining the different stances that he and Xi are taking in handling various issues, while also mentioning the cultural norms of other countries.

The dangers of using the ‘genocide’ label

The fact is, after the programme was aired, pro-Trump media criticised Biden for playing down the damage that China has caused to Uighurs. Of course, Biden did not mention one particular keyword: genocide.

Over the decades, the Chinese government has indeed constantly faced some tricky issues in its governance of Xinjiang. Its current tough measures — especially the “re-education camps” that China calls “vocational education and training centres” — have been criticised by Western media since the second half of 2018, who accuse China of large-scale detainment without trial of Uighurs, implementation of forced labour, and violation of human rights. At the 2019 UN General Assembly, the human rights situation in Xinjiang was a topic of contention between two international camps; and in February this year, a coalition of international human rights groups jointly called on the international community to boycott the 2022 Beijing Winter Olympics, with a group of US Republican senators introducing a resolution to pressure the International Olympic Committee to pick another host country for the Winter Olympics.

Meanwhile, in January this year, former US Secretary of State Mike Pompeo dramatically lashed out at China for “committing genocide and crimes against humanity in Xinjiang”. And given this “political legacy” of his predecessor, current Secretary of State Antony Blinken also twice agreed with Pompeo’s assessment of China’s “genocide” against the Uighurs.

Now, here’s a question. What was the basis for this conclusion of “genocide”? How does it compare when put beside other international actions? Furthermore, if it is true, how can the US and many other world powers still cooperate with a political regime that commits “genocide” without blushing?

Regrettably, the emergence of the term “genocide” did not mark the start of such violence and neither did it put an end to it.

What counts as genocide?

The word “genocide” did not exist before World War II. In 1944, Raphael Lemkin — a Polish lawyer of Jewish descent — combined the ancient Greek word “genos” meaning race or tribe, with the suffix -cide, derived from the Latin word for killing, to coin the word genocide and set out the concept in his book Axis Rule In Occupied Europe. Lemkin committed the rest of his life to making this previously unnamed atrocity a crime under international law.

In December 1948, the United Nations General Assembly passed the “Convention on the Prevention and Punishment of the Crime of Genocide” which defines genocide as “killing members of the group”; “causing serious bodily or mental harm to members of the group”; “imposing measures intended to prevent births within the group” and so on. It asserts: “Persons committing genocide or any of the other acts enumerated in article III shall be punished, whether they are constitutionally responsible rulers, public officials or private individuals.”

Regrettably, the emergence of the term “genocide” did not mark the start of such violence and neither did it put an end to it. The extent of human actions in this respect is simply appalling. Infamous examples include the Armenian genocide during the Ottoman Empire in 1915, the purge of the Jews by the Nazis, the massacre by the Khmer Rouge, the Rwandan genocide, and so on. However, as it involves the sovereignty of other countries, or because governments are unwilling to damage their own country’s sovereignty or be held accountable by history, many world leaders avoid discussing “genocide”. This situation is an objective fact. For example, while the US signed the UN Convention in 1948, it was only ratified by the US Congress in 1988, all because the US was worried that it might have implications for the massacres of indigenous peoples in its own history. What about the oppression of Aboriginal peoples in Australia? Does that count as “genocide”? Some historians say so, but this remains debatable.

However, due to insufficient evidence and the need to maintain trade and other relations with China, these politicians are torn about what to do.

We need not look too far back in history. Does the massacre of the Rohingya people by Myanmar soldiers count as “genocide”? If the US has yet to label this a “genocide”, then why has China’s governance of Xinjiang become a “genocide”?

Actually, Western politicians are also being cautious and somewhat being put in a spot in their attitudes towards China’s Xinjiang issue. Pompeo clearly alleged that China has committed “genocide” against the Uighurs in Xinjiang. Biden mentioned it as well during the election but never brought it up again after that. Canadian Prime Minister Justin Trudeau carefully kept a distance but was instead criticised as being a “panda in the headlights” by Canadian media. Leaders of various Western countries are concerned about human rights issues in Xinjiang, especially the vocational education and training centres. Western media are also continually urging their country’s politicians to harshly criticise and even sanction China for its actions. However, due to insufficient evidence and the need to maintain trade and other relations with China, these politicians are torn about what to do. Besides, once the term “genocide” is spelt out online and in print in black and white, it would not be easy to backtrack from it anymore.

China truly needs to be more transparent and promote national integration with a human rights-based approach. We shall wait and see if China’s next step would be to significantly revise its regional national autonomy policy.

It is important to point out that, before outsiders are able to independently conduct interviews and investigate the situation, no one can independently verify the mystery surrounding the real happenings in Xinjiang and if the allegations of rape and sexual abuse of Uighur women as reported by BBC is a fact. China truly needs to be more transparent and promote national integration with a human rights-based approach. We shall wait and see if China’s next step would be to significantly revise its regional national autonomy policy.

We can be certain that the Chinese government’s governance of Xinjiang is aimed at “finding a solution” (求治). Regardless of the vocational education and training centres or re-education camps, their ultimate goal is to integrate its training subjects back to society after undergoing “education”. This cannot be confused with “genocide”. If one rejects this fundamental truth and blindly puts pressure on the alleged perpetrators or even claims that these behaviours are indeed “genocide”, one may fall into a controversy of double standards and lose credibility as a result.

Related: Will the West boycott Beijing's Winter Olympics over Xinjiang? | Battling atheist China: US highlights Xinjiang issue and religious freedom in Indo-Pacific region | Mulan: The people-pleaser that ended up offending all? | Xinjiang — the new Palestinian issue?