Companies like Disney hoping to capture the huge Chinese market must buck up and understand the cultural and political sensitivities involved even more. Otherwise, in an age of increased tension between China and the West, they might find themselves tripping up over landmines from both sides. 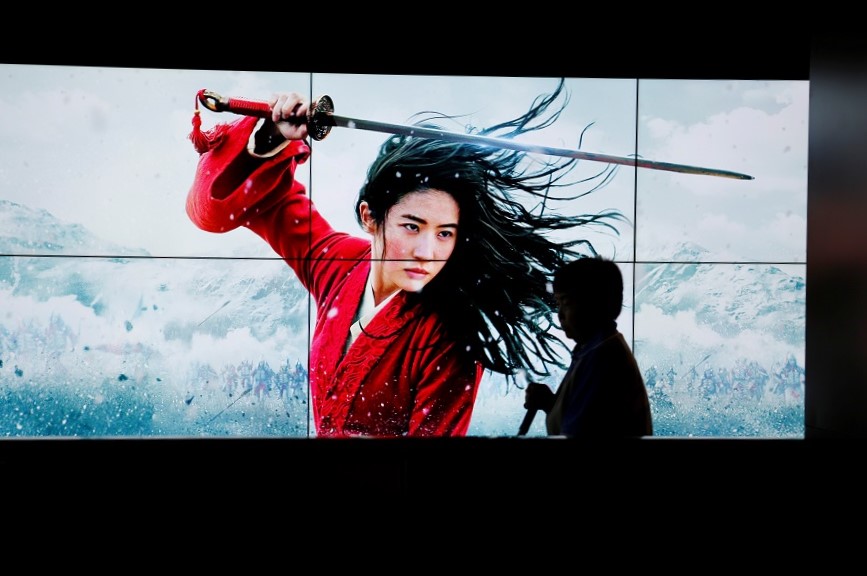 A cleaner walks past screens promoting Disney's movie Mulan as the film opens in China, at a cinema in Beijing, China, 11 September 2020. (Florence Lo/Reuters)

Grace Chong - 30 January 2023
Amid ongoing tensions, a high-level visit by US Secretary of State Antony Blinken to China in the coming week shows hope for improved relations between the two economic powerhouses. Zaobao correspondent Yu Zeyuan notes that while the meeting may not produce practical results, it is a much needed exchange to manage and control China-US relations from worsening.
Read more
Translated by Grace Chong on 16 September 2020

“I’m puzzled. China’s so big. Why did they need to film in Xinjiang?” I asked my Singaporean colleague as we discussed the recently premiered blockbuster Mulan. She was baffled too.

This live action remake of Mulan cost Disney US$200 million (S$272 million) to film. Its release was delayed a few times due to the Covid-19 pandemic and it only made its worldwide debut this month. But instead of high box office takings, what followed was a barrage of criticism directed at Disney.

When the film premiered on Disney Plus in early September, sharp-eyed members of the audience glimpsed Xinjiang governmental organisations such as Turpan Public Security Bureau in the end credits. For Western audiences worried about human rights issues in Xinjiang, this was a big no-no.

The entire movie was approximately two hours long, and scenes set in Xinjiang appeared for roughly one minute.

Mulan was reportedly mainly filmed in New Zealand. Xinjiang was only one of the 20 filming locations in China. The entire movie was approximately two hours long, and scenes set in Xinjiang appeared for roughly one minute. Perhaps even Disney was surprised that this was enough for the film to be associated with sensitive human rights issues in Xinjiang. Coupled with the current climate of heightened China-US competition, the film also faced problems that were blown out of proportion.

Last week, members of the US Congress sent a bipartisan letter to Disney, querying Disney's relationship with Xinjiang's security and propaganda authorities during the production of Mulan. A #BoycottMulan movement also gained ground on Western social media. But even before the controversy over Xinjiang erupted, Hong Kong pro-democracy protesters were already boycotting Mulan due to lead actress Liu Yifei’s support for the Hong Kong police on her social media last August.

A flop in both the Western and Chinese markets

While Mulan was a flop in the Western market, how was its performance in the Chinese market? As Disney’s only “Chinese princess” film, Mulan repeatedly appeared in the top searches on China’s social media platforms. Many people were indeed paying attention and talking about it prior to its release. Yet, after its actual release last week, it has proven to be a flop as well.

For that matter, Chinese audiences rated Mulan 4.8 out of 10 on movie review website Douban — not a passing grade at all.

Based on China’s online chatter about Mulan, many things went wrong. Hua Mulan was a character from the Northern Wei dynasty. Yet, she travelled through time and appeared in a rural dwelling known as Fujian tulou (福建土楼) commonly seen only after the Song dynasty. Furthermore, big, red lanterns were hung up high in the ancestral hall and Mulan was heavily made up — her rouge was easily thicker than the ash on a wall. Such portrayals reveal Western stereotypes of Chinese aesthetics. But perhaps most offensively, Mulan is made out to be a natural tomboy with an inexplicable abundance of “qi” (气). Her “superpower” is baffling and also at odds with the Chinese audience’s impression of her being an ordinary but courageous and kind-hearted girl who was not inferior to any man.

If we keep things in perspective, Hua Mulan is a character from The Ballad of Mulan (《木兰辞》). There are no clear historical records that she really existed. So, it is fine to have some creative licence and adaptation in the movie. But the ballad is widely known in China, and Chinese audiences would assess the movie according to whether the movie is faithful to Hua Mulan’s story, whether there is only a superficial understanding of Chinese tradition and culture, and whether Chinese elements have been injected in the movie just as a novelty. For that matter, Chinese audiences rated Mulan 4.8 out of 10 on movie review website Douban — not a passing grade at all.

Disney had hoped to win over both Western and Asian audiences, but ended up pleasing neither. This is an allegory for the awkward situation that many Western companies now find themselves in. On the one hand, they want to pander to the huge China market, but on the other, they are finding it increasingly difficult to navigate the intense geopolitical competition.

...in order to avoid controversy and to make sure the movie could be screened in China, Disney let the Chinese authorities look at the script and took in their views even before shooting began...

Capturing hearts of the huge Chinese market a tall order

While Mulan was trying a bit too hard to cater to the China market without sufficient understanding of Chinese tradition and culture, there is no doubt that it was a sincere effort. In media interviews, director Niki Caro called it a “love letter to China”, while the all-Chinese cast including Liu Yifei, Gong Li, Donnie Yen, and Jet Li were tailored for the China market.

According to US media reports, in order to avoid controversy and to make sure the movie could be screened in China, Disney let the Chinese authorities look at the script and took in their views even before shooting began, seemingly bearing out earlier accusations by US Attorney General William Barr of Disney “kowtowing” to Beijing. Indeed, a scene of Mulan and her love interest sharing a passionate kiss was cut following feedback from test audiences in China.

However, besides having to be careful not to tread on mines in China, Disney and other Western companies now also face a lot of pressure in their own countries. A senior manager of an European company in China revealed that his company came under suspicion for having operations in Xinjiang, and was asked to submit a rigorous report. And as Beijing’s policies towards Hong Kong and Xinjiang do go against the universal values in Western society, the local governments have to respond under pressure of public opinion.

The controversy over Mulan might be just the beginning. Given the confrontational tension between China and the West, it seems the middle ground will only shrink, and there will be no more clear lines drawn between politics, business, and art. Western companies like Disney just want to make money, but now it looks like they have to pull up their socks. If they are not careful, not only will they be unable to make money, but they might end up treading on mines on both sides.

Related: Trade war? There are always business opportunities to be found | How many US companies will leave China? | US companies in China: No place that can take China's place