The US and India are set to sign the Basic Exchange and Cooperation Agreement at the third US-India 2+2 Ministerial Dialogue later this month, rounding out the trio of foundational agreements between them for comprehensive military cooperation. Hong Kong-based commentator Zheng Hao says this portends greater threats for China, the unspoken target of closer US-India military ties. 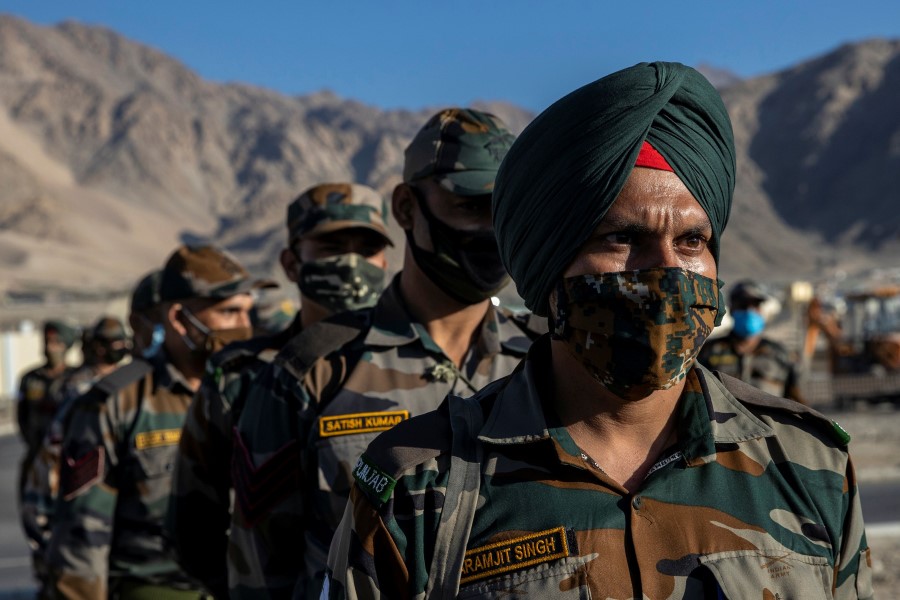 Indian soldiers stand in a formation after disembarking from a military transport plane at a forward airbase in Leh, in the Ladakh region, 15 September 2020. (Danish Siddiqui/REUTERS)

Candice Chan - 20 June 2022
The Fujian, China’s third aircraft carrier, was launched on 17 June. The highlight is the electromagnetic catapult system for launching aircraft, which could put it on par with much of the US’s cutting-edge technology in the field. Zaobao correspondent Yu Zeyuan takes a closer look at the implications of this development.
Read more
Translated by Candice Chan on 23 October 2020

The third US-India 2+2 Ministerial Dialogue is due to take place on 26 and 27 October in New Delhi. Indian media has reported that Indian External Affairs Minister S. Jaishankar and Defence Minister Rajnath Singh will meet with US Secretary of State Michael Pompeo and Defence Secretary Mark Esper. There will be in-depth discussions on US-India relations, the regional situation, and bilateral military cooperation, with the goal of reaching consensus on strengthening strategic cooperation in the Indo-Pacific. The highlight of the meeting will be the signing of the third military cooperation agreement between both sides — the Basic Exchange and Cooperation Agreement, or BECA. This is another important step in forging a US-India military alliance.

The BECA mainly involves gathering of geospatial intelligence, and sharing of maps and satellite images, in order that the US and Indian militaries can mount a coordinated defence. As an Indian official said, marine navigation, flight, warfare, target positioning, responding to natural disasters, and even GPS on our mobile phones, all rely on geospatial intelligence. Hence, once the BECA is signed, India will be able to use the US’s advanced geospatial intelligence to boost the accuracy of its radar, navigation, precision-guided weapons and unmanned combat aerial vehicles. It would also advance India’s land, sea and air intelligence gathering on all fronts.

Now, with the BECA, the US and Indian military have in fact completed the foundational agreements required for comprehensive military cooperation, or what the Indian media calls the “troika of pacts”, forming the basis of a US-Indian military alliance.

In the joint statement released during US President Donald Trump’s visit to India in February, both sides looked forward to an “early conclusion” of BECA. Eight months later, both sides are about to sign the BECA, showing their strong desire to ramp up sharing and cooperation in military information, which is key to raising bilateral air and strategic missile cooperation. Once the agreement is signed and takes effect, it will also open the door to bilateral cooperation in other military areas.

It is especially noteworthy that in the previous two US-India sessions held in 2016 and 2018, both sides signed the Logistics Exchange Memorandum of Agreement (LEMOA) and the Communications Compatibility and Security Agreement (COMCASA) respectively. Now, with the BECA, the US and Indian military have in fact completed the foundational agreements required for comprehensive military cooperation, or what the Indian media calls the “troika of pacts”, forming the basis of a US-Indian military alliance. I say this for three reasons.

Any military agreement is built on mutual trust. Without trust, there cannot be cooperation. For example, the LEMOA signed in August 2016 allows military forces on each side to access supplies from designated military facilities of the other side — that is, supplies, spare parts, and maintenance services from each other’s land, sea, and air bases. The COMCASA signed in September 2018 allows the US to provide India access to encrypted communications equipment and systems, so that the control systems of both militaries can communicate securely whether in peacetime or war. Obviously, this would be difficult without firm mutual trust.

Third, regardless of whether it is recognised or not, it is already a fact that the US and India have established a military alliance.

As US-India military cooperation has accelerated significantly in recent years, it is only a matter of time before both countries form a formal alliance. For example, while both countries spent close to a decade negotiating for the LEMOA, negotiations for the BECA were completed within a year, demonstrating that US-India cooperation is becoming increasingly important, urgent, and pragmatic.

These conversations have enhanced information sharing between the security, military, and intelligence departments of the US and India. They are also reminiscent of India-US cooperation in the 1960s...

US-India military ties have also strengthened amid China-India border tensions. For example, following a phone conversation between Pompeo and Jaishankar in late June, Indian national security adviser Ajit Doval has kept in touch with his US counterpart Robert C. O’Brien. US chairman of the Joint Chiefs of Staff General Mark A. Milley and Indian Chief of Defence Staff General Bipin Rawat have also spoken on the phone numerous times. In addition, Esper and Singh also spoke on the phone in July.

These conversations have enhanced information sharing between the security, military, and intelligence departments of the US and India. They are also reminiscent of India-US cooperation in the 1960s where there was, in particular, the sharing of high-quality satellite images and phone interceptions following the Sino-Indian border conflict of 1962, as well as the sharing of data on Chinese military and weapon deployment on the 3,488 km-long Line of Actual Control (LAC). The Indian media has, in fact, recently quoted a source saying that New Delhi is maintaining a strict vigil on Chinese military activity in almost all sectors along the LAC.

Clearly, these actions derive from the need for US-India cooperation to contain China and to push forward the establishment of a so-called “Asia-Pacific NATO”.

India has picked a side

Clearly, these actions derive from the need for US-India cooperation to contain China and to push forward the establishment of a so-called “Asia-Pacific NATO”. India cannot wait to get into a strategic embrace with the US and it has picked a side in joining the US, Japan, and Australia in forming an alliance to contain China. This is obviously an act with a hidden motive. US-India military cooperation is obviously not empty talk but actual cooperation.

Lastly, it is important to note that while the LEMOA was signed during the Barack Obama administration (August 2016), Trump did not reject it as he did with other agreements signed prior to his term of office. Instead, he signed the COMCASA in September 2018 and is about to sign the BECA soon. This reflects the continuity and normalisation of US-India military cooperation across different presidential terms. China must remain highly vigilant in this regard.

Related: Containing China: Will the Quad become an Asian mini-NATO? | Quad: Containing China should not be the raison d’être for any grouping | India in the Indo-Pacific: Reining in China in the new theatre of great power rivalry | China-India border clash: Will India's misperceptions of China's strength lead to war?