Containing China: Will the Quad become an Asian mini-NATO?

With the foreign ministers of the US, Japan, India, and Australia convening in Tokyo for their latest ministerial quadrilateral security dialogue meeting last week, and the US especially keen to contain China through this grouping, economics professor Zhu Ying wonders: Will the Quad become an Asian mini-NATO? 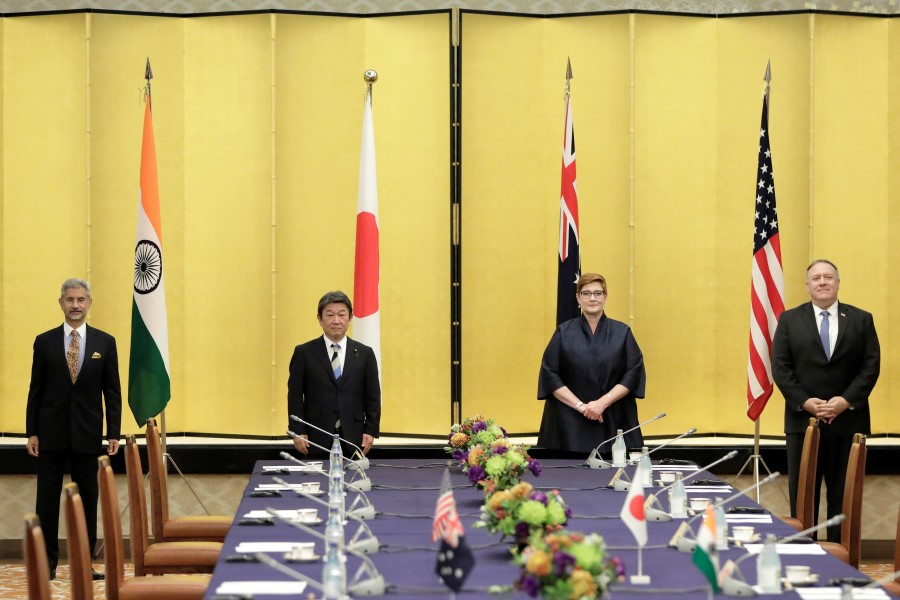 Grace Chong - 11 January 2022
Chen I-hsin asserts that the US is no longer in a position to facilitate cross-strait talks, given that China’s national strength has increased considerably and the US is no longer seen as a neutral arbiter. Moreover, the “two states” theory which Taiwan’s ruling party seems to support leaves little room for dialogue, rendering any pressure from the US futile.
Read more
Translated by Grace Chong on 14 October 2020

On 6 October, the foreign ministers of the US, Japan, India, and Australia held the Quadrilateral Security Dialogue (Quad) in Tokyo. Given the China-US Cold War, the Quad attended by US Secretary of State Mike Pompeo drew attention because US President Donald Trump is not interested in any alliances — he is only interested in turning the Quad against China. Will an Asian mini-NATO be established?

May 2007 saw the first senior officials-level meeting between the US, Japan, India, and Australia in the first iteration of the Quad. The grouping has its roots in the Tsunami Core Group that worked together on disaster relief efforts in the wake of the disastrous tsunami in Japan in 2004. In 2006, Japanese Prime Minister Shinzo Abe proposed an “Arc of Freedom and Prosperity”, giving an ideological flavour to the Quad. China’s initiatives to reclaim land and create territory in the South China Sea became a key driver of the Quad. However, after that one and only short meeting in May, under pressure from China, then Australian Prime Minister Kevin Rudd announced Australia’s exit from the talks, and the first Quad dissolved in 2008.

But one thing was clear: the Quad was revived because of China.

Since 2008, China’s international influence has grown, leading to the four countries reviving the Quad. In November 2017, Quad talks included seven key issues, including freedom of navigation, maritime security, and respect for international law. Following the talks, however, each party continued to hold different interpretations of the issues, showing that each had different understandings of China’s influence. But one thing was clear: the Quad was revived because of China. India was worried that its strategic interests were being encroached upon, and that China’s projects in Pakistan would pose a threat to India. Japan was concerned that China’s projects in Gwadar port would affect the energy supply chain. Australia was concerned about China’s influence on its domestic politics and higher education. The US was looking for a way to deal with China following its exit from the Trans-Pacific Partnership (TPP).

The relationships between China and the Quad countries have undergone much changes recently. China and India have clashed in the Himalayas, with at least 20 Indian troops killed, and an unknown number of Chinese military casualties. Following the call by the Australian government for an independent investigation on the source of the coronavirus, China limited Australian exports such as beef and wine. Australia also accused China of increasing interference in Australia’s domestic politics. Among the four countries, Japan currently has the best relations with China, but Japan has always supported the Quad.

Relations between the US and China are the most tense. The US considers its Indo-Pacific strategy part of its efforts to contain China. In June 2019, the US Department of Defense released its Indo-Pacific Strategy Report, making this claim: “Perhaps no country has benefited more from the free and open regional and international system than China, which has witnessed the rise of hundreds of millions from poverty to growing prosperity and security. Yet while the Chinese people aspire to free markets, justice, and the rule of law, the People’s Republic of China (PRC), under the leadership of the Chinese Communist Party (CCP), undermines the international system from within by exploiting its benefits while simultaneously eroding the values and principles of the rules-based order.”

Pompeo’s words confirmed China’s suspicions that the Quad meeting would be the beginning of an “anti-China coalition” to contain China's rise. China had opposed this meeting on both occasions in 2007 and 2017.

In November 2019, during the East Asia Summit, the US State Department released its report “A Free and Open Indo-Pacific: Advancing a Shared Vision”, which said: “The US vision and approach in the Indo-Pacific region aligns closely with Japan’s Free and Open Indo-Pacific concept, India’s Act East Policy, Australia’s Indo-Pacific concept, the Republic of Korea’s New Southern Policy, and Taiwan’s New Southbound Policy.” The report criticised China’s policy on Xinjiang and the Hong Kong national security law, and raised the view that China was exporting its domestic governance approach to the rest of the world. At the end of the report is a statement that “Congress has... underscored the US commitment to Taiwan’s defence and international space… The Administration and Congress will continue to work together to strengthen the whole-of-government commitment to a free and open Indo-Pacific region.”

Against this backdrop, the Quad meeting on 6 October was closely watched because of worsening China-US relations. Pompeo played up the meeting in a direct affront to China. Just before the meeting, he said, “As partners in this Quad, it is more critical now than ever that we collaborate to protect our people and partners from the CCP’s exploitation, corruption and coercion.” Pompeo’s words confirmed China’s suspicions that the Quad meeting would be the beginning of an “anti-China coalition” to contain China's rise. China had opposed this meeting on both occasions in 2007 and 2017.

No joint statement was issued after the meeting. Only the US made pointed remarks about China; the other countries did not do so. Readouts of the meeting released by each of the countries showed areas of concurrence and difference. For instance, Japan mentioned that the ministers exchanged views on North Korea and the East and South China Seas, while Australia and India mentioned access to safe and effective vaccines. Australia also mentioned critical minerals. Australia and the US mentioned countering disinformation, but Japan and India avoided this sensitive topic. The “countering disinformation” referred to is ostensibly targeted at China.

The outcome of the meeting demonstrates that once again, while all four Quad countries have countering China in their sights, each participating country has different interests and stances towards China. Thus, an operating mechanism cannot be formed between all sides. Perhaps this is the reason why there was no joint statement after the meeting.

...how can there be a coalition, let alone an Asian mini-NATO, when an operating mechanism for one has not been established?

Based on this outcome, it is virtually impossible for the Quad to become an Asian mini-NATO. On 9 October, Pompeo said that a coalition of four powerful democracies including the US, India, Japan, and Australia has been formed to “push back against the Chinese Communist Party”. He hopes that this Quad can be “institutionalised”. Yet, we observe that this coalition is non-existent based on facts — how can there be a coalition, let alone an Asian mini-NATO, when an operating mechanism for one has not been established? Besides, India adopts a non-alignment foreign policy and has never hoped that the Quad would become a military- or maritime-centric organisation. Despite border tensions between India and China, India at most hopes that the Quad would become an institutionalised “proceeding”.

There are two reasons why an Asian mini-NATO cannot be established. First, economic globalisation. As China has both the largest market and manufacturing base, it is difficult for the Quad countries to decouple from it. Taking Japan as an example, according to a joint survey by the Japan Center for Economic Research and Nikkei in September 2020, about 60% of the Japanese businessmen surveyed support the government’s call for Japanese firms to bring production back home. Yet they look forward at the same time to reaping profits from China’s strong consumer market. In late August 2020, the number of Uniqlo stores in China reached 767. Five years ago, there were only 387. This means that the company managed to double their brick-and-mortar presence in China in just five years. Not only that, this is the first time that the brand’s China store count has exceeded that of Japan’s.

China is not following in the Soviet Union’s footsteps in seeking military expansion.

Second, China is not the old Soviet Union and neither is it seeking military expansion in the four Quad countries. NATO was formed because Western countries were afraid that the Soviet Union would launch military attacks on Western Europe, especially after they had witnessed Stalin’s series of external expansions, which confirmed their worries. Following the Berlin Blockade, the US became determined to establish a defence mechanism with Western European countries. On 4 April 1949, the US signed the NATO treaty with 11 other Western countries. China is not following in the Soviet Union’s footsteps in seeking military expansion. Based on this point alone, there is no need for Japan, India, and Australia to form an Asian mini-NATO with the US to contain China.

Failure to establish an Asian mini-NATO does not mean that there are no problems between China and the four Quad countries. On the contrary, China urgently needs to improve its ties with India and Australia, and also maintain China-US relations, which must not be severed. China-Japan relations must continue to be developed as well.