Did China miscalculate the Ukraine war?

It is likely that China got more than it bargained for in the Ukraine conflict that is looking to be more protracted than either Russia or China expected. In this scenario, it finds itself in the awkward situation of professing to stand by its principles yet showing tacit support for Russia. It still has options, but the unity that Europe and the UN has shown in condemning Russia should also put China on notice. 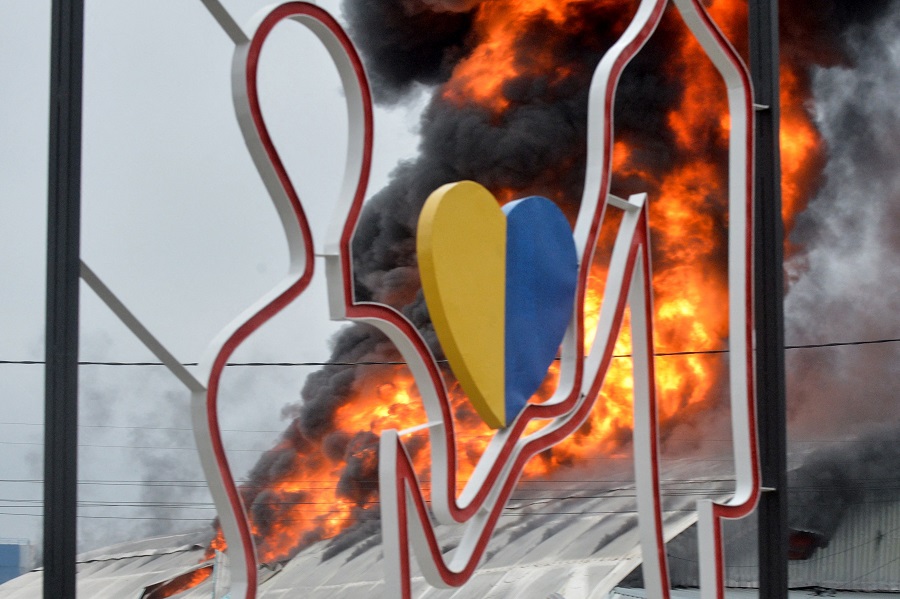 A burning building is pictured after shelling by Russian forces in Ukraine's second-biggest city of Kharkiv on 3 March 2022. (Sergey Bobok/AFP)

Grace Chong - 5 August 2022
In life as in death, food brings people together and is a means to commune with one another, as seen in rituals during the seventh lunar month or Hungry Ghost Festival. Perhaps in feeding the spirits of the dearly departed, the unknown and indeed their own, people are reminded that an ending is not the end and that the bond between the living and dead is never broken.
Read more
Translated by Grace Chong on 4 March 2022

Amid thousands of Ukrainian civilian deaths, and as the fighting between Russia and Ukraine entered its eighth day, Russia has claimed full control of Kherson in southern Ukraine, a strategic port city of about 300,000 people. Heavy shelling continues in Kharkiv, Ukraine’s second largest city, while the capital Kyiv is under siege by a Russian military convoy stretching over 60 kilometres.

Images of homes and schools damanged by shelling made the rounds on the internet, angering many. Two rounds of negotiations between Russia and Ukraine have been inconclusive, with Ukraine vowing that it will never surrender in the face of a strong opponent. Everyone expects the fighting to intensify and the number of casualties to increase. The United Nations said that over one million Ukrainians have fled their country because of the Russian invasion, which may lead to Europe’s largest influx of refugees since World War II.

This means that Russia will always have an income stream by exporting energy to China even if it is at odds with European countries.

China is not a participant in the Russia-Ukraine war, but following the escalation of the conflict and the stream of heart-wrenching images of war brutality, American and European countries have banded together in a rare show of great solidarity and China’s conceptual muddle and strategic test are clear.

At the start of the war, the outside world questioned if China was in cahoots with Russia or if it had provided Russia with political support to launch a military operation in Ukraine. Fodder for these doubts stem from closer China-Russia relations in recent years — just as Russia was about to take military action, China upgraded its quasi-alliance with Russia and even said that “the fast train of the China-Russia relations is always running on its track, having no terminal but only filling stations”. Both parties issued a joint statement declaring that they “oppose further enlargement of NATO”, and they also signed a major energy deal. This means that Russia will always have an income stream by exporting energy to China even if it is at odds with European countries. On 24 February, China’s foreign ministry spokesperson refused to label Russia’s military operation as an “invasion”, drawing criticism and even anger from people in other countries.

...more international analysts are of the view that China is not Russia’s partner in crime in starting the war but may have been backstabbed instead.

China may have been backstabbed

However, as it becomes increasingly difficult to defend Russia’s blatant invasion of Ukraine, China is in an awkward position and its external statements seem contradictory. This week, more international analysts are of the view that China is not Russia’s partner in crime in starting the war but may have been backstabbed instead — China was not informed of Russia’s full military intentions beforehand, and was caught in a conceptual and strategic dilemma as a result.

For example, when Chinese Foreign Minister Wang Yi spoke on the situation in Ukraine at the Munich Security Conference on 19 February, he stressed that the sovereignty, independence and territorial integrity of all countries should be respected and safeguarded, and that this also applied to Ukraine. His remarks indicate China’s hope for all parties to resolve the issue through negotiation and not by force.

This is also evidenced by the fact that predictions by various prominent Chinese international relations academics claiming that there will be no war have been proven wrong. Notably, even after Russian President Vladimir Putin ordered a “special military operation” in Ukraine on 24 February, China did not evacuate its citizens immediately. On 27 February, China’s envoy to Ukraine even said, “We must wait until it is safe before leaving.” However, China started evacuating the first batch of Chinese citizens the next day.

Figures show that about 6,000 Chinese citizens live in Ukraine. The slow pace of evacuation by the Chinese foreign ministry has drawn criticism within China. If there had not been a prior assessment that there would be no or limited fighting, China’s response would probably be more organised; it would not have ended up in such an awkward position or be criticised by its own people.

The New York Times last week quoted US intelligence saying that over three months, the US held six urgent meetings with top Chinese officials, where they presented intelligence and beseeched China to tell Russia not to invade, but the Chinese officials said they did not think an invasion was in the works.

Diplomatically, China and Ukraine are friendly. Strategically, would China continue to join with Russia to oppose the US, and continue to support Russia and stand opposite a united Europe and US?

Miscalculations by China and Russia

Was China mistaken to trust Russia? Or did China just keep quiet despite knowing that Russian troops would launch a large-scale invasion? A reasonable explanation might be that China knew that there might be conflict, but assessed that it would be just small-scale sporadic fighting that would end quickly and people could “wait it out” to safety. This was probably also Russia’s plan, to get Ukraine’s capital to surrender within a few days. But Russia miscalculated, and China’s image has also suffered.

Conceptually, China’s support of Russia’s “security concerns” and principle of respect for the sovereignty and territorial integrity of any country puts it in a dilemma. Diplomatically, China and Ukraine are friendly. Strategically, would China continue to join with Russia to oppose the US, and continue to support Russia and stand opposite a united Europe and US?

Veteran Singaporean diplomat Bilahari Kausikan recently wrote an article in The Straits Times, in which he incisively noted that: “Although the Chinese government may have realised it made a mistake in blindly following Moscow, the Chinese public is still cheering Russia's invasion and the West's inability to stop it. So whatever its reservations, Beijing has to appear supportive. China is navigating a precarious line internally as well as externally.”

Strategically speaking, discord between China and Russia would ease US containment of China. On the other hand, if China gets closer to Russia at this time, that would encourage China’s international rivals to join together and step up economic and military connections to check China’s rise. The fact is, the atmosphere of unity shown by Europe since the weekend of 26 and 27 February in supporting Ukraine’s defence of freedom and democracy should put China on the alert.

The important thing is that China and Russia are different countries. China has more strategic options and abilities than Russia.

Of course, it remains to be seen how long Europe and the US remain in sync. Besides, there is still a possibility of a quick end to the Russia-Ukraine war, which would ease China’s strategic difficulty. China should hope the fighting ends as soon as possible; if it cannot mediate, it has to avoid being a “lifesaver” for Russia amid sanctions against it, and giving others a hold against itself. At the same time, it has to properly handle domestic nationalism.

The important thing is that China and Russia are different countries. China has more strategic options and abilities than Russia. Compared to Russia, China puts more value on a peaceful and stable world, and wants more to be a power that is sincerely respected.

Looking at the war in Ukraine and then thinking about the Taiwan Strait, the objective of Beijing and the Chinese people would probably not someday become like Russia’s, claiming to be “one people” while bombing civilians. This sudden, sharp “Ukraine test” is a dilemma, but also provides room for reflection and breakthrough.