How is mainland China planning to achieve reunification with Taiwan, when a common history no longer holds the same significance?

For Beijing, the anniversary of the 1911 Xinhai Revolution on 10 October is replete with political significance, not least as a reiteration of the Chinese Communist Party’s mission and an assertion of its one-China stance. But for Taiwan's younger generation, the revolution and even the history of the Republic of China are fast losing their meaning. How will mainland China communicate its thoughts on cross-strait relations as it commemorates the Xinhai Revolution over the weekend? With such different perspectives on the history, present and future of "China", how is mainland China going to achieve its goal of reunification? 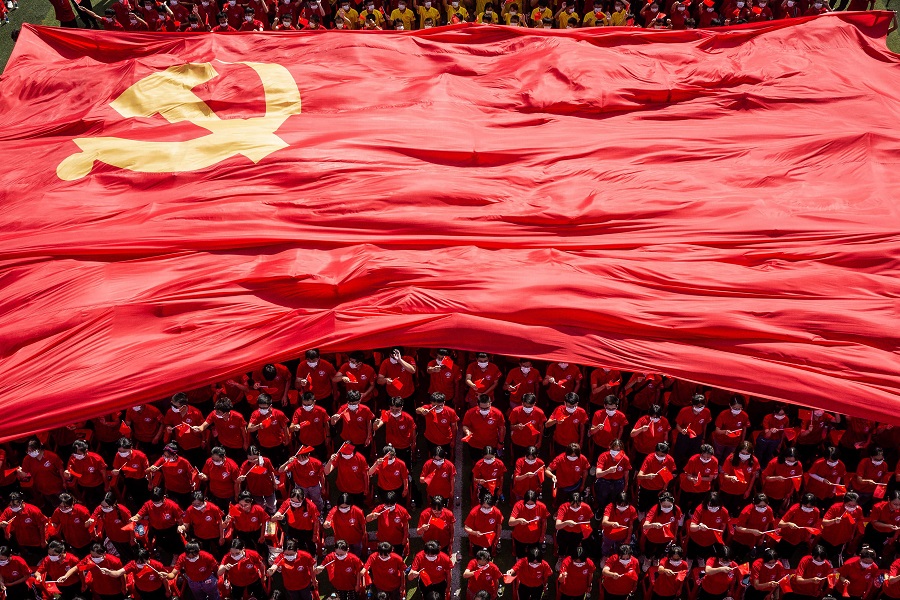 University students display a flag of the Communist Party of China to mark the party's 100th anniversary during an opening ceremony of the new semester in Wuhan, Hubei province, China, on 10 September 2021. (STR/AFP)

Grace Chong - 30 November 2022
With all eyes on Indonesia as the G20 chair, the summit concluded successfully as Indonesian President Joko Widodo deftly balanced the demands of the G20 members amid the Russia-Ukraine war, along with a painstakingly crafted joint declaration that addresses the war. ISEAS academic Leo Suryadinata gives us a look at how Indonesia managed to handle the situation while making it clear that the economic summit is not a platform to discuss security.
Read more
Translated by Grace Chong on 8 October 2021

In two days, it will be the 110th anniversary of the Wuchang Uprising. The nationwide uprising or mutiny that began in Wuchang overthrew the Qing Dynasty within a few months, bringing an end to dynastic rule that had lasted for thousands of years in China and kickstarting the Chinese revolution known as the Xinhai Revolution.

Beijing’s high-profile commemoration of the Xinhai Revolution is a reminder of history but also more importantly a way of asserting its speaking rights and achieving practical political goals.

The Xinhai Revolution has always been held in high regard by Beijing, as it is seen as a historical bond between both sides of the Taiwan Strait. To Beijing, although the revolution did not change the semi-colonial and semi-feudal nature of Chinese society, it initiated a modern national democratic revolution in its real sense and paved the way for China's progress, spreading the ideas of democracy and republicanism.

According to official descriptions, the Chinese Communist Party (CCP) regards the cause it fights for as an “extension and development of the 1911 Revolution” and “the current people of China are all successors of the revolutionary cause started by Sun Yat-sen”. Since the 1990s of the previous century, mainland Chinese officials have generally maintained these views when evaluating the Xinhai Revolution.

This weekend, commemorative events will be held on 9 October as usual, a day before the actual anniversary of the historical event. This could be yet another occasion for Chinese President Xi Jinping to start new discussions on cross-strait relations following the 40th anniversary of the issuance of the “Message to Compatriots in Taiwan” in 2019, where an exploration of a “one country, two systems” formula for Taiwan was proposed.

Taiwanese media United Daily News quoted insider sources saying that Xi will put forward a new statement on Taiwan, which will importantly point towards the basic strategy of strictly adhering to “one country, two systems” and promoting cross-strait reunification in the new era of the mainland. Xi will also make clear his unwavering opposition to Taiwan independence and foreign interference, clearly drawing an absolute red line and expressing his determination and sincerity towards promoting peaceful reunification at the same time.

Keeping a lid on cross-strait tensions

Beijing’s emphasis on opposing Taiwan independence and promoting reunification is not new. When the CCP celebrated its 100th founding anniversary on 1 July, Xi strongly emphasised that “realising China’s complete reunification is a historic mission and an unshakable commitment” of the CCP, and that resolute action must be taken to “utterly defeat” any attempt toward Taiwan independence. He also mentioned that China “will never allow any foreign force to bully, oppress, or subjugate” the country.

Thus, the following three points will be a focal point at the upcoming commemoration of the Xinhai Revolution: one, will Beijing signal an acceleration of reunification, especially a reunification by force? Two, will the “one country, two systems” formula for Taiwan be made clearer, which, from Taiwan’s perspective, means that more boundaries will be drawn? Three, what does Beijing think of the present state of cross-strait relations? Will they deal with it urgently?

The cross-strait situation does look tense. Beijing sent a record 150 aircraft into Taiwan’s Air Defence Identification Zone over mainland China’s recent National Day break. On 6 October, Taiwan's Defence Minister Chiu Kuo-cheng said the current situation with the mainland was “the most serious” he has seen in his more than 40-year military career — Beijing already has the means to invade Taiwan and would be capable of mounting a full-scale invasion of the island by 2025.

This news might provoke another reaction from mainland China. While US President Joe Biden has said that he and Chinese President Xi Jinping agreed to abide by the “Taiwan agreement” during their phone conversation in early September, both sides want to change the current situation. Mainland China seeks to push for reunification, while more than once the US has tested or breached the limits, such as sending officials to Taiwan, normalising US-Taiwan exchanges, and US military aircraft landing in Taiwan.

In a congratulatory letter to the incoming Kuomintang chairman Eric Chu on 26 September, Xi wrote: “At present, the situation in the Taiwan Strait is complex and grim.” However, this line was omitted from reports by mainland China state media Xinhua, showing that Beijing does not want to worsen hostilities between people on both sides of the Taiwan Strait, and add to the online talk of “military reunification”.

Looking at all this, isn’t it clear that Beijing is in no hurry to take military action against Taiwan? In 2025, Beijing will be stronger than it is now and the cost of attacking Taiwan will be lower. Only thing is, as the cross-strait issue becomes increasingly internationalised, Beijing will only get more merciless in its condemnation of independence for Taiwan, and its military intimidation will intensify. The recent flights into Taiwan by 150 military aircraft was a response to the joint exercises just north of Taiwan off the southwest coast of Okinawa, involving three aircraft carriers from the US and UK.

The younger generation even rejects the idea of a so-called “Greater China” (大中华), which means that even if mainland China does achieve armed reunification, governance will be a big problem in future.

If the CCP leaders speak more strongly than before at the session on 9 October, it will be another indication that the situation is tougher. If the wording is not particularly strong, it will show that following the phone call between the Chinese and US leaders as well as the meeting between senior officials in Switzerland, Beijing is still confident that the cross-strait situation will not go out of control. And although the cross-strait atmosphere is not the best, the latter case is more likely.

After all, the bigger issue before Beijing is that for the Taiwanese, the Xinhai Revolution and the history of the Republic of China are far removed. The younger generation even rejects the idea of a so-called “Greater China” (大中华), which means that even if mainland China does achieve armed reunification, governance will be a big problem in future. Beijing has probably thought about this too. It would be more feasible for mainland China to use its current advantage to stabilise the current situation before pushing for peaceful reunification.

Related: Beijing bans Taiwan fruit imports: Impoverishing Taiwan to achieve reunification? | Taiwan is America's best asset against China, but for how long? | The median line of the Taiwan Strait: No longer a boundary for mainland China | Peaceful or armed reunification: Are top Chinese advisers divided over Taiwan? | Will the Taiwan Strait issue be internationalised under Biden?