US senator John Cornyn tweeted that 30,000 US troops are currently stationed in Taiwan, before deleting it after it caused an uproar in China. Following the US troop pullout of Afghanistan, China has played up the idea of "Afghanistan today, Taiwan tomorrow", saying that the US would abandon Taiwan in a crisis. Zaobao correspondent Edwin Ong takes a look at how the US and China are playing their cards in the Taiwan Strait. 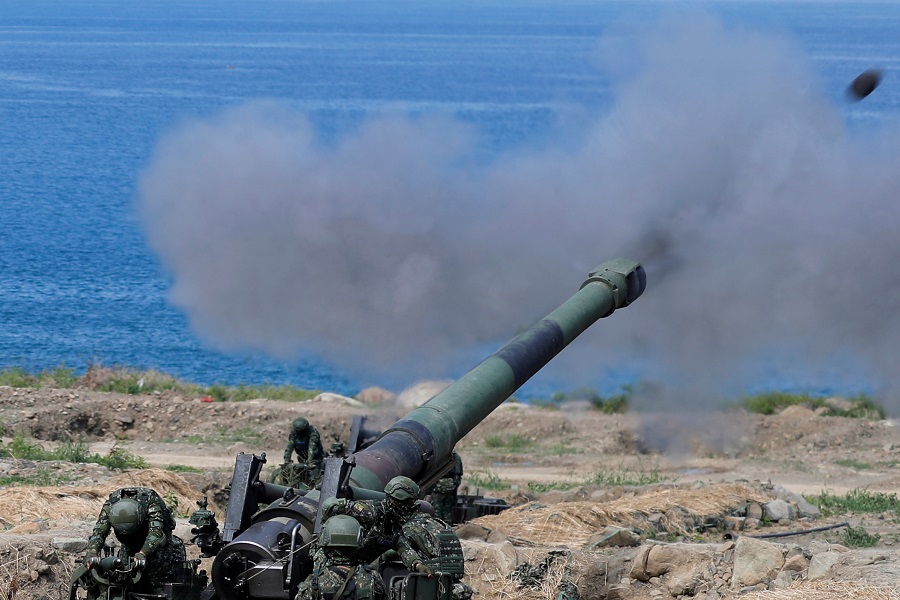 Grace Chong - 27 January 2023
Regulators are ramping up efforts to cull poorly performing firms and those that violate the rules or break the law. A record number of companies got the boot from Chinese mainland stock exchanges last year, and that number could even double in 2023.
Read more
Translated by Grace Chong on 19 August 2021

On 16 August, hawkish US Republican Senator John Cornyn tweeted that 30,000 US troops are currently stationed in Taiwan, causing an uproar in mainland China. Chinese state media expressed strong disapproval about the news, calling Cornyn a “dotard”, with some saying that if the figures were true, mainland China could immediately launch a war to destroy and expel US troops and reunify Taiwan militarily.

Cornyn deleted his tweet the next day without clarification but Chinese public opinion remained doubtful. Many believe that it was not a simple slip of the tongue but a test of China’s response to a possible stationing of US troops in Taiwan. The Chinese public's wariness of warming ties between the US and Taiwan and its encroachment on the "one-China principle" is not expected to subside any time soon. Amid tense and complex cross-strait relations, this incident would once again fan the flames of calls for the reunification of Taiwan by force in the mainland.

Sixty-nine-year-old Cornyn tweeted the number of US troops currently stationed around the world on Monday night, stating that there are 30,000 US troops in Taiwan, which is even more than the 28,000 US troops in South Korea, quickly catching the attention of mainland Chinese state media. Cornyn has always taken a clear stand in supporting Taiwan, and is also an important member of the US Senate Select Committee on Intelligence with a good understanding of US military intelligence. Hence, Chinese state media immediately concluded that he had accidentally blurted out previously unknown information about Taiwan. They demanded a US response to the matter while urging a thorough investigation.

Global Times editor-in-chief Hu Xijin wrote in an article published on 17 August that the presence of US troops in Taiwan is a red-line that cannot be crossed. This move is tantamount to “a military invasion and occupation” of Taiwan and “an act of declaring war on the People’s Republic of China”. He said that if the news were true, the Chinese government and the Chinese people would never accept it. He believes that “China will immediately put the Anti-Secession Law into use, destroy and expel US troops in Taiwan by military means, and at the same time realise reunification by force”.

But whether the US stations 30,000 troops in Taiwan, it is a fact that this year mainland China and Taiwan have been slipping towards a more dangerous situation and the risk of conflict is growing.

While the US government has yet to comment on the matter, American media have come forward with their explanations. Newsweek first clarified on 17 August that Cornyn might have mistakenly quoted the figures listed on a Wikipedia page about “30,000 troops from Combined Arms and branches” stationed in Taiwan between 1954 and 1979, which was before diplomatic relations were established between the US and China. The report then quoted statistics from the Defense Manpower Data Center, noting that as of 30 June, there are “30 active duty personnel in the territory: 23 Marine Corps, five Air Force, and two Navy”.

The fact that the US has a small number of troops stationed in Taiwan is actually an open secret. According to the American Institute in Taiwan, a number of active US military personnel have been stationed at its office since 2005.

On 18 August, mainland Chinese media threw out a conspiracy theory as it tracked the issue, noting that the US Marines arrived in Taiwan last year and held the first joint training in 40 years with the Taiwan military as it continued to challenge the bottom line of “one China”, and so Cornyn’s tweet was possibly to test China’s reaction to the US stationing troops in Taiwan. The suspicion is that the US government might be systematically setting the tone of public sentiment for stationing troops in Taiwan, and even for “Taiwan independence”.

With all sorts of opinions going around, it is up to Cornyn or the Biden administration to break the silence and reveal the truth. But whether the US stations 30,000 troops in Taiwan, it is a fact that this year mainland China and Taiwan have been slipping towards a more dangerous situation and the risk of conflict is growing.

US vessels have been passing through the Taiwan Strait this year, and military planes have taken off and landed at Taiwan airports. Of late, the Biden administration has also stepped up playing the “Taiwan card” — early this month, it approved the first arms sale to Taiwan worth US$750 million (S$1.02 billion). Last week, the Taiwan Coast Guard and US Coast Guard held a video conference to discuss bilateral communications and cooperation, prompting some figurative foot-stamping by the mainland China authorities, which warned Taiwan that working with external forces and stirring the fire would lead to dire consequences.

In response to the recent contact between Taiwan and the US, on 17 August, the Chinese People’s Liberation Army’s Eastern Theater Command engaged in the strongest show of military strength, deploying combat vessels, maritime patrol aircraft, and fighter aircraft to conduct live exercises such as organised joint strikes in the air and sea around the southwest and southeast of Taiwan. For now, it is not known whether this is also a response to Cornyn’s tweet.

PLA Eastern Theater Command spokesperson Shi Yi said the military exercises are a serious response to intervention by external forces and the antagonism of Taiwan pro-independence forces. In a rare move, he named the US, saying that Taiwan and the US have joined forces to be provocative, which has seriously damaged the peace and stability in the Taiwan Strait, and become the biggest risk to security in the Taiwan Strait.

... mainland China media has escalated the idea of “Afghanistan today, Taiwan tomorrow”, saying that the US would abandon Taiwan in a crisis. However, the Taiwan Strait is far more significant than Afghanistan in terms of geopolitics and economics, and even its importance in the tussle between world powers.

Amid the US’s hurried troop pullout from Afghanistan which has hurt its reputation, mainland China media has escalated the idea of “Afghanistan today, Taiwan tomorrow”, saying that the US would abandon Taiwan in a crisis. However, the Taiwan Strait is far more significant than Afghanistan in terms of geopolitics and economics, and even its importance in the tussle between world powers. On 15 August, US international relations academic Stephen Walt tweeted: “Disengagement from Afghanistan should have been managed far better, but I don’t get the hysterical claims that the tragedy there has demolished US credibility. Not fighting for less-than-vital interests says nothing about a state’s willingness to fight for vital ones.”

China and the US are still testing each other’s limits on the Taiwan Strait. The US military will probably adjust deployment after pulling out of Afghanistan and focus on defending the West Pacific. The chances and possible intensity of regional confrontation between China and the US are expected to grow, in line with the risk of misjudgements and unintentionally engaging in a hot war.

Related: 'Afghanistan today, Taiwan tomorrow’? | Will American soldiers lay down their lives for Taiwan? | Inroads for China in a Taliban-led Afghanistan? | Taiwan is America's best asset against China, but for how long? | Will the US abandon Taiwan? | Will the Taiwan Strait issue be internationalised under Biden?