Will the Taiwan Strait issue be internationalised under Biden?

Mainland China has most recently sent 28 aircraft close to Taiwan, prompting concerns that the situation in the Taiwan Strait might boil over, not least with US-led actions possibly internationalising the issue. What’s the true temperature of the situation? Zaobao correspondent Yang Danxu reports. 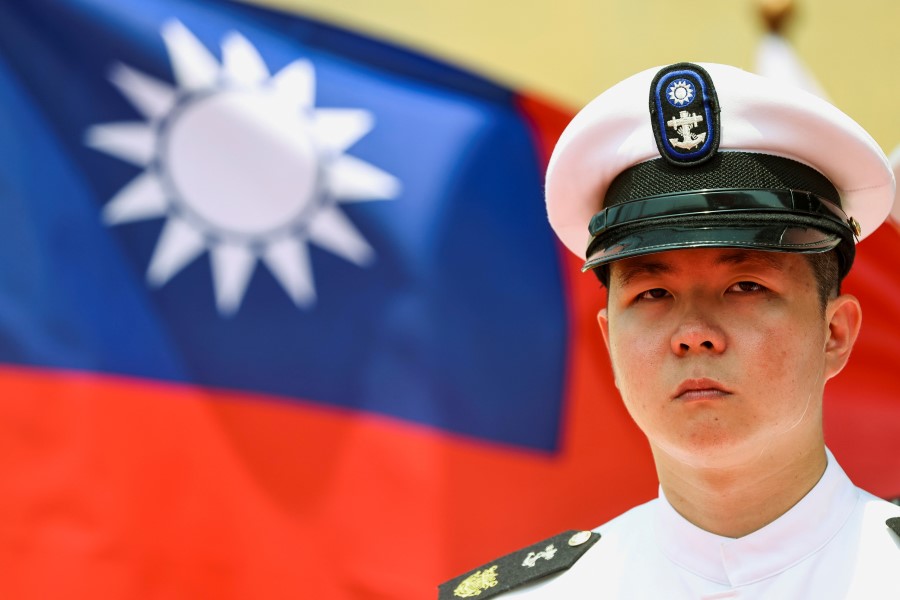 A Taiwan Navy honour guard looks on in front of a Taiwan flag during the launch ceremony for the Taiwan Navy's domestically built amphibious transport dock "Yushan" in Kaohsiung, Taiwan, 13 April 2021. (Ann Wang/Reuters)

Candice Chan - 29 June 2022
Hong Kong’s incoming Chief Executive John Lee has nominated the next batch of senior officials, who have been duly appointed by China’s State Council. Many “new Hong Kongers” are gradually making their way into politics through various channels, facilitated by the central government in Beijing, who are not satisfied with the pro-establishment camp in Hong Kong. But can these new Hong Kongers show that they have the interests of all Hong Kongers at heart?
Read more
Translated by Candice Chan on 16 June 2021

The People’s Liberation Army (PLA) on 15 June sent 28 aircraft close to Taiwan — more than the 25 aircraft on 12 April — adding to the touchy situation in the airspace above the Taiwan Strait.

On 6 June, three US senators made the unusual move of travelling to Taiwan on a US Air Force C-17 freighter rather than a private jet, adding to tensions in the Taiwan Strait. One week later, the joint statement following the Group of Seven (G7) summit included text on the Taiwan Strait — a sensitive issue for Beijing — stressing the importance of peace and stability in the Taiwan Strait.

These two incidents are significant. One comment from mainland China described the US military aircraft landing directly in Taiwan as “the US and Taiwan slicing the sausage that much closer to the finger”, while Taiwanese commentator Julian Kuo said it was a “quasi-military drill with gifts”  — the announcement that the US will donate 750,000 coronavirus vaccine doses to Taiwan were the gifts, while the true objective was a military drill for sending supplies and mobile troops as well as the evacuation of locals in case of fighting in the Taiwan Strait.

With the China-US competition over Taiwan clearly intensifying recently, and greater international attention on Taiwan, there is also a higher risk of a spark setting off something major in the Taiwan Strait.

Aggressive posturing by the PLA

The PLA has obviously ramped up its deterrence actions over the past couple of weeks. On 8 June, the PLA Rocket Force posted a video clip on its official Weibo account (东风快递) showing scenes of its military exercises, complete with a rap in Taiwanese Hokkien and captions in traditional Chinese characters giving a warning: “Want to start trouble? Want to be separatist? You better listen up!”

And on 9 June, the PLA’s 80th Group Army also posted on its official Weibo account (80强军号) a photo with the words “ready for war” in Chinese.

Apart from exchanging words at a distance, all sorts of military “flexing” is going on. On 8 June, the military desk of China National Radio (CNR) released a video showing a missile brigade of the PLA Rocket Force carrying out night training at an unspecified location, with artillery strikes, fast missile transfer practice and second wave attacks.

The night training also featured the Dong Feng-26 missile, also known as an “aircraft-carrier killer”. This dual-capable missile can be used to attack ground and sea targets, and is powerful in striking aircraft carrier formations. Clearly, this is not only aimed at Taiwan, but meant as a deterrent to the US, which may intervene in any possible confrontation in the Taiwan Strait.

For the first time ever on 9 June, the PLAAF also released footage of the Xian H-6 bomber — the main force in any encirclement of Taiwan — launching cruise missiles. Hong Kong media Ming Pao reported that the missile launched was the CJ-10, which had first made its debut during the military parade to commemorate the 70th anniversary of the end of World War II in 2015 in mainland China. The footage of the bomber releasing this type of missile was also made public for the first time.

On 13 June, a programme preview posted on the official Weibo account of the CCTV-7, a channel dedicated to the PLA, also showed footage of a cross-sea landing drill with amphibious fighting vehicles travelling at full speed towards the beach.

Although ominous war clouds loom over the Taiwan Strait and various parties are inching closer to the possibility of confrontation, how likely is it that Beijing would completely fall out with the US and Taiwan in the short term?

With China’s rapid rise, the US wants to prevent Beijing from changing the status quo. But China’s rise is in itself a change in status quo, and Washington thinks that measures must be taken to contain it.

Interestingly, following a phone call between top Chinese diplomat Yang Jiechi and his American counterpart Antony Blinken on 11 June, mainland Chinese state media Xinhua News Agency reported that Blinken had mentioned in the call that the US ”adheres to the one-China policy”. The readout of the call published by the US Department of State however, said that Blinken had “called on Beijing to cease its pressure campaign against Taiwan and peacefully resolve cross-strait issues”. With both sides each having their own positions to stand by, we can perhaps only have a full picture by piecing together the official reports and statements of both sides.

With China’s rapid rise, the US wants to prevent Beijing from changing the status quo. But China’s rise is in itself a change in status quo, and Washington thinks that measures must be taken to contain it. But Washington also knows for a fact that once a military conflict breaks out in the Taiwan Strait, Beijing will spare no effort in safeguarding its territorial sovereignty and there is a high chance that any fighting in the Taiwan Strait will not be confined to a small geographical area. Besides, Taiwan’s greatest utility lies in restraining Beijing — “fighting without breaking” seems to be the best way to play this card to the maximum.

In the face of the US testing the boundaries on the Taiwan issue, calls for a military unification have been on the rise among the mainland Chinese public. While Beijing must fight back against Washington’s stepping on the red line to show its tough stance, as long as the one-China policy is intact, solving the Taiwan issue will not be the top priority of higher-ups in Beijing for the time being.

Following the US’s rallying of its allies to internationalise the Taiwan issue, the PLA’s circling of Taiwan and its various preparatory exercises to strengthen combat effectiveness are expected to become routine actions of the mainland. The Economist last month called Taiwan the “most dangerous place on earth”. Although various sides will temporarily leave room for negotiation at the moment, the risk factor of this most dangerous place on earth has clearly gone up.

Related: While the US sets new goals for G7, China sets new goals for itself | Over 100 mainland Chinese sand dredgers 'surround' Matsu islands | Will China take Taiwan by force within six years? Taiwanese think not and experts are worried | The PLA’s game of deterrence in the Taiwan Strait