Russia-Ukraine crisis: Can Russian aggression bring back the former glory of the Soviet Union?

Russian President Vladimir Putin has made it clear that he considers Russia, Ukraine and Belarus one people, and its recent actions concerning Ukraine are unsettling. Some in China support the strong and aggressive style of Putin and are glad that Russia has created a buffer to divert the West’s attention away from China. Nevertheless, Russia’s aggressive stance has resulted in 40 years of suffering and failure. US-based academic Zhou Nongjian looks into Russia's intentions with Ukraine and why it is adamant on restoring the former glory of the Soviet Union. 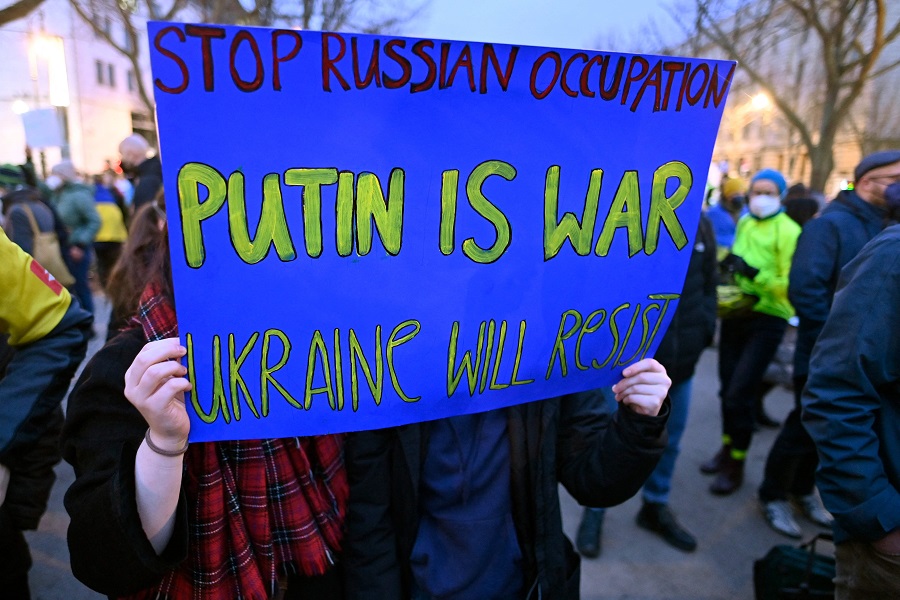 Pro-Ukraine demonstrators hold a placard during a demonstration in front of the Russian embassy in Berlin, Germany, on 22 February 2022. (John Macdougall/AFP)

Candice Chan - 23 November 2022
Zaobao journalist Miao Zong-Han takes a closer look at voter fatigue in Taiwan in the upcoming “nine-in-one” elections, caused mostly by the arguing over plagiarism allegations, which might interest the highly educated but bore the average voter. Another question is whether the atmosphere at these elections will be a good indicator of things to come in the 2024 general election.
Read more
Translated by Candice Chan on 23 February 2022

The recent Russia-Ukraine crisis has sparked global attention and is considered one of the most serious crises since the Cold War. Amid concerns of a major war, various countries such as the US, the UK, Canada, Australia and Japan have given instructions to repatriate diplomats and their families from Ukraine. (NB: On 21 February, Russian President Vladimir Putin ordered the deployment of troops to two breakaway regions in eastern Ukraine after recognising them as independent. According to a Reuters report, Russian state television showed Putin, joined by Russia-backed separatist leaders, signing a decree recognising the independence of the two Ukrainian breakaway regions — the self-proclaimed Donetsk People's Republic and the Lugansk People's Republic.)

How does one explain Russia’s obsession with Ukraine? On 12 July 2021, the Kremlin released an article by Russian President Vladimir Putin titled "On the Historical Unity of Russians and Ukrainians" in which he said that Russians and Ukrainians share a common heritage and destiny, and that together with Belarusians, they are “descendants of Ancient Rus” and one people. This article is considered a public opinion precursor to Russia's attempt to annex Ukraine.

The ultimate goal of Russia’s military actions towards Ukraine in recent years is obvious. In 2014, Russia annexed Crimea, which was followed by the Donbas war that forced the Ukrainian government to sign the Minsk Protocol and grant self-governance to the Donetsk and Lugansk oblasts (provinces) in eastern Ukraine. Now, Russia has deployed more than 100,000 troops to the Russia-Ukraine border.

On 8 February, French President Emmanuel Macron held talks with Putin at the Kremlin to mediate the Ukraine crisis.

In recent years, some people in China have called Russia a “fighting nation” (战斗民族) and admired Putin’s aggressive style. But his personality, approach and worldview are in fact problematic for the Russians and not worth emulating.

While discussing the Minsk Protocol, Putin said, “I believe that there is simply no other alternative. I repeat once again, in Kyiv, they either say that they will comply, or they say that this will destroy their country. The incumbent president recently stated that he does not like a single point of these Minsk agreements. Like it or don't like it, it's your duty, my beauty. They must be fulfilled. It won't work otherwise.”

Putin’s declaration caused an uproar and is seen to reflect his worldview.

In recent years, some people in China have called Russia a “fighting nation” (战斗民族) and admired Putin’s aggressive style. But his personality, approach and worldview are in fact problematic for the Russians and not worth emulating. The nearly 40 years between the collapse of the Soviet Union and today’s Russia is, in reality, a period of turmoil and failure.

Since the late 1970s, China and Russia have taken separate paths. For over 40 years, China has focused on developing its economy to become the second largest economy in the world, while Russia has experienced a historic setback, as well as political and economic disappointment.

Back then, the Russians focused on short-term gains and thought nothing of splitting the country to overturn the old regime. It took just six years to go from perestroika (“restructuring”) in 1985 under Mikhail Gorbachev, then general secretary of the communist party of the Soviet Union, to the dissolution of the Soviet Union in 1991. While this dramatic change put a decisive end to the old political regime, it came at the enormous price of the collapse of a state.

In retrospect, the change in political regime exists only in name. Today’s Russia has returned to authoritarian rule. The bud of democracy bloomed for an instant to overturn Soviet authoritarianism, only to be exchanged for today’s authoritarianism under Putin — like old wine in a new cask. This is a political failure and a period of turmoil in history.

Even with Putin’s so-called “historical unity” in the case of Ukraine, it is difficult for today’s Russia to return to Soviet-era political unity.

Furthermore, the lost territory that the Russians treated with disregard previously, is now causing it much pain. In 2005, Putin declared that “the collapse of the Soviet empire ‘was the greatest geopolitical catastrophe of the [20th] century’”.

The Russians had themselves disintegrated such a massive country, and now they are making a one-sided attempt to reconcile, speaking repeatedly about historical relations and cooking up excuses to have their way regardless of whether the other party is willing, and in spite of international opposition.

What is broken cannot be made whole again. Even with Putin’s so-called “historical unity” in the case of Ukraine, it is difficult for today’s Russia to return to Soviet-era political unity. Actions to annex land and population have ceased to exist since the Second World War and now go against the norms of international relations in the present world. The international society will certainly ostracise and impose sanctions on any country that insists on doing so.

No matter how aggressive the Russians may seem, or how clever their tactics may be, in the grand scheme of things, even if Russia ultimately overcomes all challenges and restores the Soviet empire to its former glory, that would just set the country back to square one. After decades of struggle and conflict, Russia would have gained nothing.

Over the past 40 years, China and Russia have switched places. While “maintaining a low profile and biding time” (韬光养晦), China quietly worked on its economy, while Russia continues the aggressive ways of the Soviet era. Apart from relying on the huge nuclear arsenal and strategic weapons left behind by the Soviet Union, Russia is unable to compete with the West in any other way. In terms of economic power, it has been reduced to a minor player.

Wikipedia has a list of the world’s top ten economies according to available data from three major international organisations. Between 1965 and 1985, the Soviet Union was the world’s second largest economy. But today’s Russia has fallen off the list. Statistics from the International Monetary Fund in 2020 show that China’s GDP amounted to around US$14 trillion while Russia’s GDP was around US$1.4 trillion, or roughly 10% of China’s GDP — even lower than the GDP of China’s Guangdong province.

Given the different economic report cards of China and Russia, who is the US’s top competitor? While the former Trump administration considered China its top competitor, US President Joe Biden called Russia its “opponent” and China a “serious competitor” during his inaugural policy address.

Russia’s aggressive style and ongoing conflict with the international society, especially the Western world, has inadvertently provided a strategic buffer and cover for China as a third party, and diverted and dispersed external pressure from the US and the West.

Amid the recent escalation of the Russia-Ukraine crisis and Russia’s aggressive behaviour, Biden’s initial judgement seems correct, reinforcing the idea that Russia is still the most dangerous opponent of the US and the Western world.

A buffer for China

Russia’s aggressive style and ongoing conflict with the international society, especially the Western world, has inadvertently provided a strategic buffer and cover for China as a third party, and diverted and dispersed external pressure from the US and the West.

Objectively, this is good for China. And because Russia’s attempt at restoring the Soviet empire to its former glory and its struggles with NATO and Western countries will not end in the short term, this is a long-term advantage for China.

However, when it comes to handling China-Russia relations and finding the right approach for dealing with Russia’s conflicts with other countries, China needs to strike a balance between protecting its national interest, maintaining the norms of international relations and having a righteous image.

From a long-term historical perspective, a weaker and less aggressive Russia will be more manageable for both China and the world.

Related: Does Beijing benefit from US-Russia confrontation over Ukraine? | US, Russia and China using Kazakhstan unrest as a proxy | The real reset of US-Russia relations has begun? | Can Biden 'set up' the US and Russia against China? | China and Russia’s shared interest in preventing a pro-US Kazakhstan | China’s alliance with Russia is solidifying