Did the US feed itself the wrong intelligence?

The CIA itself admitted that much of the intelligence it had gathered on China in the Mao era was proven wrong, says US academic Han Dongping. Later when it tried to cultivate academics in the US and when it supported pro-democracy groups, it arguably still did not achieve its aim of getting China to change. What were its missteps? 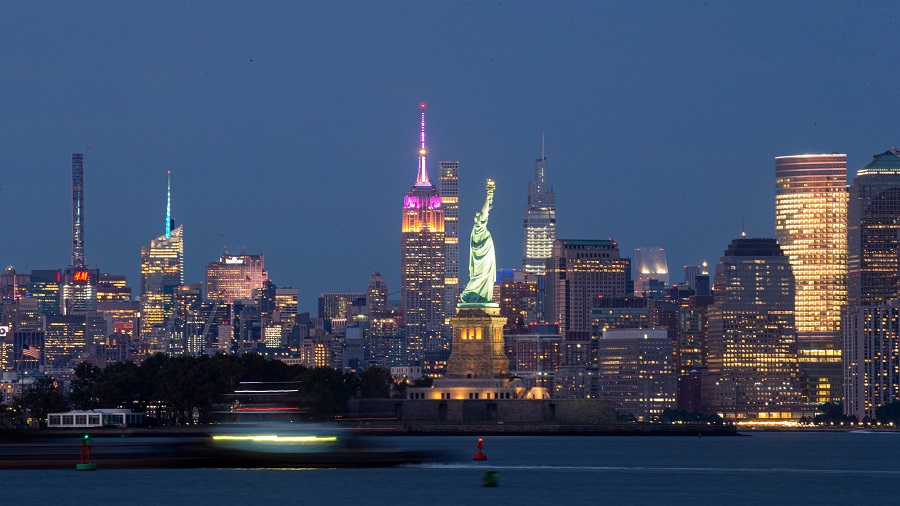 The Empire State Building and the World Trade Center sit behind the Statue of Liberty in New York City, 26 August 2020. (Kena Betancur/AFP) Grace Chong - 16 September 2020
For all of President Trump’s failings, says US academic Han Dongping, he did persist in his belief that the US has over-extended itself abroad and sought ways to pull it back. Whoever becomes the US president next will have to recognise that the US’s global role has changed irrevocably since 1945.
Read more
Translated by Grace Chong on 7 September 2020

Professor Jin Canrong of the Renmin University of China said online that US elites are being fooled by Chinese pro-democracy activists in the US who claim that China is weak and cannot withstand a single blow. In actual fact, it is the Central Intelligence Agency (CIA) that is misleading the US. Without the CIA’s support, would there be so many pro-democracy activists, Falun Gong practitioners, and Taiwan and Xinjiang pro-independence agitators? Many of these anti-China organisations in the US are supported by the CIA, as are some public intellectuals in China.

Socialism the enemy of the state

Since its establishment, the CIA has considered socialism the biggest challenge to the US’s political regime. A socialist revolution had almost broken out in the US during the Great Depression in 1929. Workers were famished and unemployed, but the capitalist US still wanted to keep prices high and would rather pour milk into the sea and let the crops rot in the ground than feed them to the poor. Amid adversity, countless workers and farmers yearned for a socialist system like the Soviet Union’s, and saw the Soviet Union as a worker’s paradise.

after the CIA was established in 1947, they worked towards undermining the socialist system

Under such circumstances, the Communist Party of the United States of America (CPUSA) and left-wing union forces gained ground during the Great Depression. Left with no choice, the US government launched various new policies with a socialist slant such as raising taxes on the wealthy, giving more assistance to the poor, and providing unemployment and social insurance to the workers. Coupled with the Second World War, these policies stimulated the US’s production and consumption, saving its capitalist system from annihilation.

American elites knew that the socialist system was very attractive to workers. Thus, after the CIA was established in 1947, they worked towards undermining the socialist system. In his book The Cultural Cold War: The CIA and the World of Arts and Letters, Frances Stonor Saunders wrote that the CIA made use of Western personalities in the culture field to participate in its cultural Cold War. This is also the reason why Professor Wang Shaoguang of the Chinese University of Hong Kong had once remarked that the CIA was the US’s propaganda department.

However, the CIA was not a successful propaganda department. In fact, it failed miserably. Among the many reasons for this is that Westerners consider propaganda a derogatory term and believe that a lie becomes the truth if it is repeated often enough. On the other hand, the Chinese consider propaganda a means of putting across a narrative, that is, introducing one’s proposition, policies and ideals to others.

During the Cold War, the CIA worked with personalities in the culture field to create a series of popular literary works.

During the Cold War, the CIA worked with personalities in the culture field to create a series of popular literary works. George Orwell’s Animal Farm and 1984 were the products of such collaborations. These books propagated ideas such as “All animals are equal, but some animals are more equal than others”, “Big Brother is watching you”, “police state”, “totalitarian state”, “totalitarianism” and so on. Some of these literary works became world-renowned classics that had far-reaching impacts on readers in the US and around the world, especially in various socialist countries including the Soviet Union and China. Many factors accounted for the US’s victory over the Soviet Union in the Cold War, but the CIA undoubtedly made a unique contribution.

Actually, the US only fell short of its goal at the last minute — in the summer of 1989, they almost succeeded.

The CIA achieved little in its infiltration of and influence on mainland China during the Mao Zedong era. It later openly admitted that over 95% of their reports on China during that period had been proven wrong. A reason for this is that the US had engaged in McCarthyism (the vilification of those with a pro-Communist stance) since the start of the Cold War, and removed experts and academics who understood China from the country. At the same time, during the Mao era, the Chinese government was aware of the West’s “peaceful evolution strategy” of getting them to change and had put up adequate defences among its government officials and within its education system.

When China implemented reform and opening up in 1978, it began sending students overseas and also welcomed foreign academics from the US and the West to China for visits and exchanges, providing much room for the CIA to influence China. US Secretary of State Mike Pompeo recently said that the US’s strategy to change China has failed. Actually, the US only fell short of its goal at the last minute — in the summer of 1989, they almost succeeded. Things did not go their way simply because they misjudged the situation and took action too early, that is, they blew their cover and failed.

The Tiananmen Square protests were forcibly suppressed on 4 June 1989. Then, the CIA had already infiltrated Chinese universities and government institutions, and were prepared for “peaceful evolution”. However, they launched their attacks too early. Although students and professors had been galvanised, the Chinese workers and farmers still favoured the Chinese Communist Party and supported the government. When university students and some officials in major cities protested against the Deng Xiaoping government to the extent that Deng imposed martial law and sent the army to put down the protest, workers and farmers were actually in favour of these suppressions.

However, in the mid-1990s, over 30 million employees of state-owned enterprises were laid off. Due to financial difficulties, village and township governments raised land tax by ten to twenty times, from under 20 RMB to a whopping 200 RMB per person, inviting much public outrage. If the CIA had launched their efforts to achieve “peaceful evolution” at this time, they would have had a higher chance of success since the farmers and workers would have supported them. China’s agricultural tax was eventually abolished in 2006.

Hence, the forces that could have changed China according to the US’s wishes were eliminated by the Chinese government. After the Tiananmen incident, the CIA started to cultivate academics and student leaders who had fled China, treating them as an army that could change China. Though ambitious, these people were not very capable and had long been estranged from Chinese society. They frequently fought among themselves over the CIA’s funding and failed to make contributions to the grand mission of changing China.

To a certain extent, the CIA’s support for such camps have instead helped the Chinese people recognise the nature of these organisations, and indirectly lent a helping hand to the Chinese government.

The CIA’s support for pro-democracy activists, the Falun Gong, and Taiwan and Xinjiang pro-independence agitators hardly had any impact on the Chinese people. While the Falun Gong was able to assert influence on the lower rungs of Chinese society, they were no match for the Chinese government.

The thought that the groups above had the power to influence China into developing in the direction that the US wanted was just the CIA’s wishful thinking and a waste of the US’s resources. To a certain extent, the CIA’s support for such camps have instead helped the Chinese people recognise the nature of these organisations, and indirectly lent a helping hand to the Chinese government.

Related: Between the US and China, which is the police state? | The US will accelerate its own decline by suppressing China | From a Marxist perspective, the China-US Cold War is inevitable | Clamp down on Chinese students and academics? America’s loss is China’s gain