Zaobao correspondent Chen Jing notes that even as China and Russia extend their friendship treaty, their relationship could still fluctuate in the face of US-China tensions and the uneasy China-US-Russia strategic triangle. 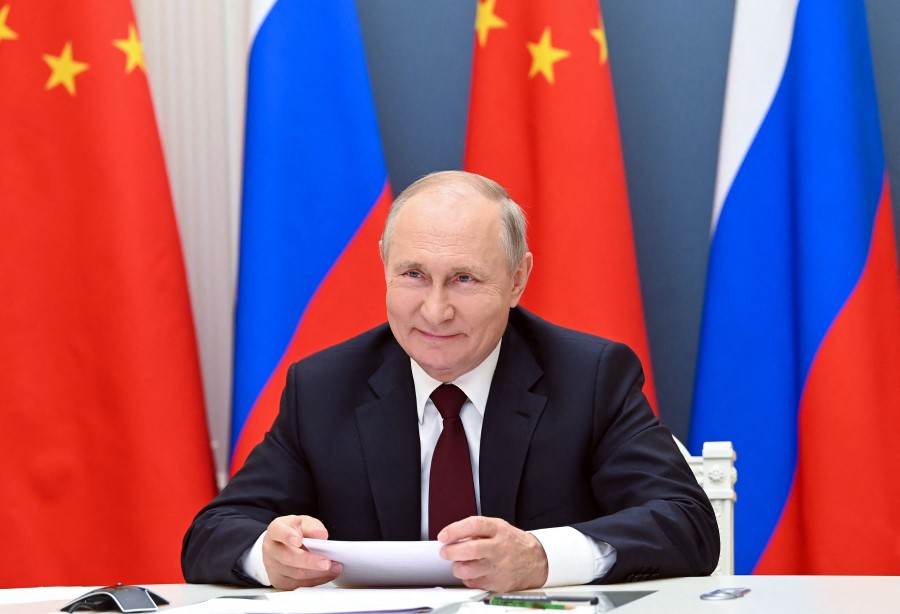 Russian President Vladimir Putin holds a meeting via video conference with Chinese President Xi Jinping (not seen) at the Kremlin in Moscow on 28 June 2021. (Alexey Nikolsky/Sputnik/AFP)

Candice Chan - 28 June 2022
US-based young comic artist Bei Yi reflects on China's gaokao (university entrance exams), which took place in early June. Every year, Chinese students cross this narrow log bridge of national exams, hoping to find a clearing on the other side. Students from regions across China, rich and poor, see this as a possible ticket to a better life and maybe even a passport to the West. When the stakes are so high, studying becomes a moral obligation to one's family. Some make it out, but on that journey, many things are left behind.
Read more
Translated by Candice Chan on 1 July 2021

The 20-year-old Treaty of Good Neighbourliness and Friendly Cooperation between China and Russia that was due to expire this month has been extended by five years. This seemingly natural decision has caught the attention of the international community. The interest generated has much to do with the strategic China-US-Russia “triumvirate”.

Chinese President Xi Jinping and Russian President Vladimir Putin met by video link on 28 June, after which they issued a joint statement announcing the extension.

The video meeting coincides with the 100th anniversary of the Chinese Communist Party (CCP), and comes less than two weeks after the meeting between Putin and US President Joe Biden, prompting comparisons between both sessions.

On 16 June, Biden and Putin met in person in Geneva, after which they released a joint statement on “strategic stability”, showing an unexpected gradual easing of relations. After the meeting, Biden suggested that Russia was in “a very, very difficult spot” and wanted to cooperate with the US, noting: “They’re being squeezed by China. They want desperately to remain a major power.”

Even as Putin stressed before meeting Xi that the strategic partnership between China and Russia was at “an unprecedentedly high level”, Biden’s comment did put China on the alert. The Global Times immediately ran an editorial saying that Biden’s way of slamming Beijing-Moscow relations was humiliating Russia, while Chinese foreign ministry spokesperson Zhao Lijian warned that “any attempt to undermine China-Russia relations is doomed to fail”.

In this context, naturally there was much interest in how the Chinese and Russian leaders would meet and what results would come of it. Kremlin Press Secretary Dmitry Peskov said before the meeting that the talks were held “via a closed video link, which allows the Russian and Chinese leaders to conduct top secret negotiations… This video link shows the special, confidential nature of partner relations between our states.”

After the meeting, Xi said, “I believe that under the guidance of the spirit of the treaty, no matter how many obstacles and hurdles must be overcome on the road ahead, China and Russia will continue to unite in their efforts and move forward with determination,” showing a firm stand in strengthening long-term bilateral relations.

There is no doubt that the extension of the treaty is evidence of steady growth in China-Russia relations. According to the treaty, neither side shall enter into any alliance or be a party to any bloc that compromises the sovereignty, security, and territorial integrity of the other side, nor embark on any such action, including entering into such a treaty with a third country. Also, if one side feels threatened, both sides shall immediately hold contacts and consultations in order to eliminate such threats.

The next two decades are crucial for China’s rise and China-US competition. The five-year extension of the friendship treaty between China and Russia may not meet Beijing’s strategic needs, and we cannot rule out the possibility of Russia adopting a “wait and see” approach towards China.

Treaty affirms relationship but is not a guarantee

This treaty was signed between then Chinese President Jiang Zemin and Putin in Moscow on 16 July 2001. Twenty years later, the US is joining forces with its allies to strengthen its containment of China, while the latter, which adopts a non-aligned diplomacy, is in need of a “quasi-ally” power like Russia to deal with increasing strategic pressure. Now that their friendship treaty is extended, China and Russia would be able to fight against Western society as partners for the next five years, which is of utmost importance to China.

China and Russia have criticised the US for taking a back seat on arms control and for deploying anti-missile systems. They have also opposed the US’s use of human rights issues as a tool to interfere with the country’s internal affairs. But analyses have pointed out that the level of conflict that Russia and China respectively have with Western society is different. The Russia-US summit demonstrated that the US hopes to improve its tense relations with Russia and start cooperating in more areas. On the other hand, amid escalating bilateral tensions, China and the US are entering a period of total confrontation that will be difficult to resolve in the foreseeable future.

The next two decades are crucial for China’s rise and China-US competition. The five-year extension of the friendship treaty between China and Russia may not meet Beijing’s strategic needs, and we cannot rule out the possibility of Russia adopting a “wait and see” approach towards China. According to public data, China has already signed friendship treaties with eight of its neighbours. Among them, the treaty with Tajikistan is valid for 25 years, the treaty with Turkmenistan can be extended for another ten years, while the treaty with Mongolia will be in effect for the long term. Comparatively, the extension of the Sino-Russian Treaty of Friendship is not that long at all.

Interests may not be completely aligned

On the other hand, while China and Russia may have many common interests in military and trade, they are competing in Central and East Asia, as well as in the Arctic Ocean region. Russia’s growing dependence on China’s economy has made this declining power even more uneasy.

Professor Shi Yinhong of Renmin University of China’s School of International Relations told Zaobao that while China and Russia might seem to get along, the fact is that they each have their own plans. Although they have come together under pressure from the US, it is difficult for them to truly trust each other.

Professor Shi pointed out that while the deterrent effect of Russian military equipment on the US is of help to China, these may also become a burden on China and may even cause China to become embroiled in confrontations between Russia and the West that it has no direct interest in and which may be a financial burden. He pessimistically predicted that should a war occur in the Taiwan Strait, Russia might not lend a helping hand.

We do not know if the friendship treaty between China and Russia will be extended again five years later. But before that, Beijing has to think about pulling Russia to its side amid intensifying China-US competition and not let it lean towards the US, as this would destabilise the uneasy strategic triangle among them.

Related: Can Biden 'set up' the US and Russia against China? | The real reset of US-Russia relations has begun? | Why China and Russia should join forces now