Japan’s neighbours, China the most vociferous among them, have protested against Japan’s decision to dump contaminated water from the Fukushima nuclear plant into the ocean in two years’ time. On the other hand, Western countries have been accused of making minimal noise on account that it’s Japan. Is this another case of geopolitics politicising the situation? Would the world have reacted differently if it were China doing the dumping? 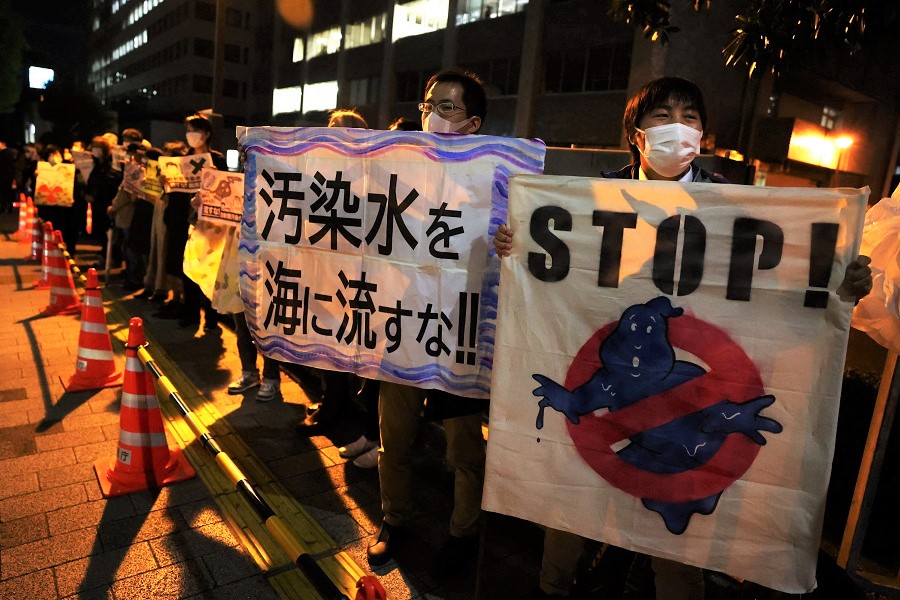 Protestors hold slogans as they take part in a rally against the Japanese government's decision to release treated water from the stricken Fukushima Daiichi nuclear plant into the ocean, outside of the prime minister's office in Tokyo, Japan, on 13 April 2021. (Yuki Iwamura/AFP)

Grace Chong - 30 January 2023
Amid ongoing tensions, a high-level visit by US Secretary of State Antony Blinken to China in the coming week shows hope for improved relations between the two economic powerhouses. Zaobao correspondent Yu Zeyuan notes that while the meeting may not produce practical results, it is a much needed exchange to manage and control China-US relations from worsening.
Read more
Translated by Grace Chong on 15 April 2021

On 13 April, the Japanese government announced its controversial decision to release diluted contaminated water from the Fukushima nuclear plant into the ocean in two years’ time. Environmental groups and fishery organisations in Japan are seized by the issue while neighbouring countries such as South Korea and Russia have expressed their concerns. There has also been a strong backlash in China.

In 2011, a 9.0 magnitude earthquake caused a tsunami in Japan, creating a nuclear accident at the Fukushima Daiichi nuclear power plant. In the aftermath, the process of cooling uranium fuel rods has produced a lot of radioactive wastewater. The plant’s administrator Tokyo Electric Power Company (TEPCO) estimates that the tanks used to hold the wastewater will reach full capacity in autumn 2022, implying an urgent need to find a means of disposal.

Although Japanese officials emphasise that TEPCO intends to dilute the wastewater more than 100 times using seawater before it is released into the ocean — that is, tritium (residual radioactive substance) levels in water would be brought down to 1/40 of national regulatory standards, or 1/7 of World Health Organization guidelines for tritium levels in safe drinking water — neighbouring countries remain unconvinced.

Interestingly, Western countries that have always paid close attention to environmental issues have yet to oppose Japan’s decision or even express any form of concern.

Since last week, Chinese officials have been reacting to Japan’s decision. Foreign ministry spokesperson Zhao Lijian criticised Japan on 13 April, saying that Japan is being “highly irresponsible” and urged it not to “disregard global public interests and simply dump the contaminated water from Fukushima into the sea and be done with it”.

Over the past few days, Chinese media have been lashing out at Japan’s decision to handle the wastewater by dumping it in the ocean. An opinion piece published in Chinese state media Global Times harshly criticised Japan’s decision as “shameful”. On social media, Chinese netizens are outraged; some attacked Japan as being “extremely selfish”, “small-minded and wicked”, and berated Japan for “making the whole world pay the price of its own mistake”. Some netizens even linked Japan’s action to the movie Godzilla that is currently showing in China, stating that Japan is launching a plan to “create Godzilla”.

Interestingly, Western countries that have always paid close attention to environmental issues have yet to oppose Japan’s decision or even express any form of concern. My friend said jokingly that China would have been condemned for all eternity if it had been the one making such an announcement.

After Japan announced its decision, the US, which is also situated along the Pacific Coast, gave Japan a vote of confidence and trust. The US Department of State released a statement saying, “In this unique and challenging situation, Japan has weighed the options and effects, has been transparent about its decision, and appears to have adopted an approach in accordance with globally accepted nuclear safety standards.” US Secretary of State Antony Blinken also openly supported Japan in a Twitter post, saying: “We thank Japan for its transparent efforts in its decision to dispose of the treated water from the Fukushima Daiichi site.”

A question of politics?

Right now, everyone has their own opinions about what effect the wastewater from the Fukushima nuclear plant will have on the marine environment when it is released into the sea, with no clear conclusion. The vastly different reactions from China and the US are also in fact political moves.

China is geographically close to Japan, and if radioactive contaminated water is released into the sea, China would be one of the first countries to be impacted. However, China’s intense reaction is also linked to the current relations between China and Japan, which have been tense this year over issues such as sovereignty disputes, Xinjiang, and Hong Kong. The joint statement by the US and Japan following their “2+2” meeting last month — aimed at China — has also worsened China-Japan relations. And last week, China’s Foreign Minister Wang Yi warned Japan not to “stretch its hands too far”, meaning to overreach.

Some views in China have it that China should use this opportunity to take the moral high ground and seek compensation or sanctions against Japan, thereby establishing China’s image as an international leader in marine environmental issues while countering Japan and the US joining hands to contain China. And Zhao paved the way for this when he spoke at the 13 April press briefing, stressing that China reserves the right to take further action.

Some analyses hold that the intention behind Japan’s announcement of its bombshell before Suga’s visit to the US is to make it a part of the exchange of political benefits.

It cannot be ruled out that the US’s strong and high-profile support of Japan also has something to do with the Biden administration’s current pressing need to rally its allies against China. Japanese Prime Minister Yoshihide Suga will visit the US this week, in US President Joe Biden's first in-person meeting with a foreign leader since taking office in January. On 13 April, Kyodo News noted that the leaders of the US and Japan may show unity against China, but there are still differences between Japan and the US in their policies towards China, in issues such as sanctions against China over human rights. The US with its tougher stance may ask Japan to take further action.

Some analyses hold that the intention behind Japan’s announcement of its bombshell before Suga’s visit to the US is to make it a part of the exchange of political benefits. Given the Biden administration’s desire to shore up its allies, Japan may be hoping to gain US support for its simple and low-cost solution for disposing nuclear wastewater, which would otherwise have come under international pressure. The US response does indeed reflect the effectiveness of this strategy.

From 5G technology to Xinjiang cotton, to the source of the pandemic and vaccine approvals, China and the West continue the tussling, with more and more issues becoming politicised. One can foresee that Fukushima nuclear wastewater will not be the last issue to be hijacked by geopolitics; in fact the curtains are just rising on the geopolitical competition over it.

Related: Chinese academic: Japan is the ‘hidden warrior’ behind China-US competition | Balancing China: Can Japan continue to be a reliable power in SEA after Abe? | Targeting China, Japan’s Indo-Pacific strategy in Southeast Asia runs into headwinds?