East Asian Institute academic Yu Hong analyses the G7’s Partnership for Global Infrastructure and Investment, an update from the earlier Build Back Better World Initiative. With the aim of mobilising up to US$600 billion over the next five years, it is a much more robust effort to counter China’s BRI. But will such heft be enough? This is the first in a five-part series of articles on the future of China. 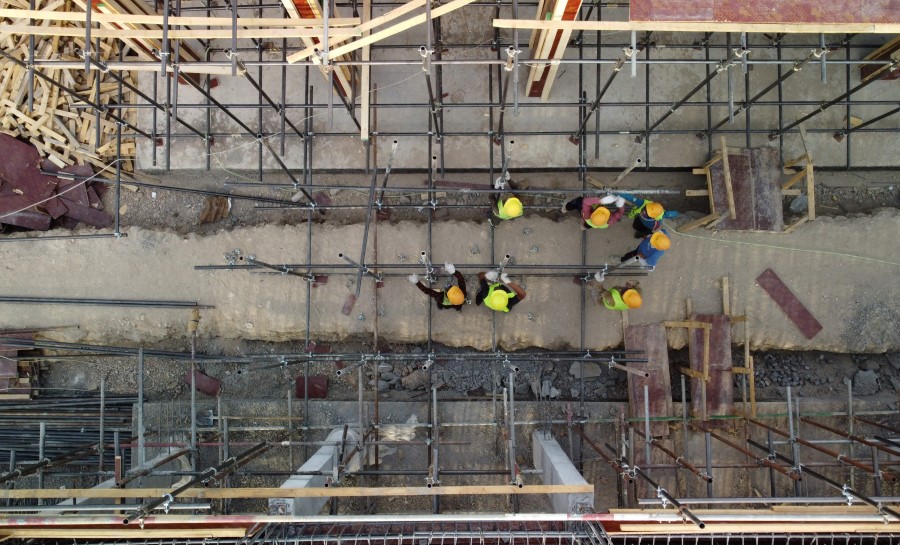 Labourers work on the construction site for a school, part of the Iraq-China "oil for construction" deal, in the Sumer neighbourhood of Nasiriyah city, in Iraq's southern Dhi Qar province, on 20 July 2022. (Asaad Niazi/AFP)

Candice Chan - 19 January 2023
The latest announcement of China’s first population drop in six decades has gained much attention, with concerns over the long-term implications for the economy and the community. How will this affect China’s GDP and its aim to overtake the US as the world’s biggest economy? Can China reverse the population trend?
Read more
Translated by Candice Chan on 7 September 2022

Since taking office, the Biden administration has characterised China as “the only competitor potentially capable of combining its economic, diplomatic, military, and technological power to mount a sustained challenge to a stable and open international system”. During his first presidential press conference on 25 March 2021, US President Biden said that China would never be allowed to surpass the US as the most powerful country in the world during his term of office.

The Biden administration has singled out China’s Belt and Road Initiative (BRI), an ambitious initiative for global infrastructure development and investment, as a threat to the interests of the US, ranging from politics and economy to national security and overseas interests.

Through the BRI platform, China is rapidly extending its economic influence in Asia and beyond. China’s BRI is perceived as a charm offensive to the world and is largely welcomed by the developing and middle-income countries across Asia, the Pacific Island states, Africa and Latin America.

Under the BRI framework, China’s increasing influence has greatly unsettled the existing global landscape and geopolitics. By working with its allies, Biden has proposed that the US should have an initiative similar to the BRI, bringing together democratic nations to help developing nations upgrade their infrastructure.

In June 2021, at the G7 summit held in the UK, Biden unveiled the Build Back Better World initiative (known as the B3W), focusing on addressing climate change, digital infrastructure, gender equality and healthcare system issues. The B3W was perceived as a G7 alternative to China’s BRI.

That is a far cry from the billions in infrastructure investment promised by Biden’s original announcement. It is peanuts compared to the billions of dollars provided by Chinese companies and banks under the BRI umbrella.

The scale of the B3W initiative places the US at a comparative disadvantage in financing infrastructure. That is a far cry from the billions in infrastructure investment promised by Biden’s original announcement. It is peanuts compared to the billions of dollars provided by Chinese companies and banks under the BRI umbrella. Barely one year later, little regional and international attention was paid to the B3W. The initiative was literally languishing.

In June 2022, the US and other fellow G7 countries officially launched and rebranded the B3W as the Partnership for Global Infrastructure and Investment (PGII), an initiative that aims to mobilise up to US$ 600 billion over the next five years, including US$200 billion, US$317.5 billion and US$65 billion mobilised from the US, EU and Japan individually. The PGII is the G7’s latest effort to counter China’s BRI.

Shortly before the G7 countries’ announcement of the PGII, Jake Sullivan, the US national security adviser, clearly stated that the US-led PGII will provide “an alternative to what the Chinese are offering”.

Unlike the BRI... the US and other Western countries have committed very little in terms of money, with most funds coming from private companies.

China and the US are now competing fiercely for influence over developing countries across the world. In June 2022, Chinese President Xi Jinping held a special high-level dialogue on global development with representative developing countries across all continents. Infrastructure financing and construction are key components of the global development dialogue proposed by Beijing. As the BRI is a state-driven initiative and is being implemented by state-owned firms, it can deliver results in a speedy manner.

The PGII is an alternative to the BRI — one that is private enterprise-led, rather than country-led, bringing together democratic nations to help developing nations upgrade their infrastructure. Unlike the BRI, in which China’s state-owned banks and firms have played a dominant role in infrastructure financing and construction overseas, the US and other Western countries have committed very little in terms of money, with most funds coming from private companies.

... details of the working mechanisms for financing and implementing PGII projects, such as how the MDB source will be tapped, have yet to be disclosed.

The PGII is financed by combining G7 countries’ government grants and funding, mobilising funding primarily from multilateral development banks (MDBs) and leveraging sovereign wealth funds and complementary private capital from pension funds, private equity funds and insurance funds, among others. By doing so, the G7 countries seek to multiply the positive impacts of the PGII on global infrastructure development and economies, and to enhance the influence of the PGII.

Some infrastructure investment projects under the PGII, which are worth US$3 billion in total investment, are under implementation. Nevertheless, details of the working mechanisms for financing and implementing PGII projects, such as how the MDB source will be tapped, have yet to be disclosed.

To provide a credible alternative to China’s BRI, the G7 can use existing MDBs as the implementing agencies of the PGII.

For example, Asian Development Bank (ADB)’s loans increased from US$14 billion in 2014 to over US$20 billion in 2020. 70% of ADB loans went towards infrastructure development. Moreover, in 2021, the World Bank approved around US$17 billion worth of loans to developing countries for infrastructure, ranging from transport, energy, and water, to information and communication technologies sectors.

PGII’s partnership with MDBs is crucial to its execution as they are needed to accelerate the building and maintenance of infrastructure projects in developing countries by reducing the reliance on public funds and grants (e.g. taxpayers’ money).

To provide a credible alternative to China’s BRI, the G7 can use existing MDBs as the implementing agencies of the PGII. In March 2022, US Secretary of the Treasury Janet Yellen held a meeting to discuss global infrastructure investment with the presidents of many major MDBs, including the World Bank, African Development Bank, ADB, European Bank for Reconstruction and Development, and the Inter-American Development Bank. The Biden administration intends to implement the PGII by building its relationship with the MDBs in its future implementation.

The Biden administration has promoted the PGII as a “democratic” alternative to the “autocratic” BRI... This positioning is likely to limit the scope for cooperation between the two.

The PGII could potentially offer developing countries in need an option to seek external loans to finance infrastructure development in addition to Beijing’s BRI. Several countries in the region and beyond have been pushing back against the BRI on the grounds that the BRI-affiliated infrastructure projects with investments from China are costly and impractical, with issues of corruption in internal transactions.

Little chance of the PGII partnering the BRI

In the stiff competition with China, the US is playing to its weaknesses rather than its strengths.

The PGII is a rebrand of the B3W, a bid for a head-to-head matchup with China. As evidenced by the announcements of the B3W and PGII, the US-led G7 is seemingly playing a catch-up game with China on global infrastructure development.

In the stiff competition with China, the US is playing to its weaknesses rather than its strengths. According to the Engineering News Record’s 2021 Top 20 Global Contractors, in the field of technological capacity and infrastructure construction, 14 Chinese construction firms are listed among the top 20 largest infrastructure contractors in the world, with none from the US.

The BRI was officially inaugurated by President Xi Jinping in 2013 and has since become the centrepiece of China’s drive to become a global power. China has financed and built thousands of infrastructure projects abroad, ranging from railways, seaports, airports, power plants and bridges to industrial parks and telecommunication networks around the world.

Since launching the BRI in 2013, China has spent billions in overseas investments and construction contracts for BRI projects in more than 100 nations. China’s total infrastructure investment in BRI countries is estimated to be between US$156.2 billion and US$332.6 billion from 2013 to 2021.

BRI still on a much larger scale

The BRI seeks to connect China with the world through infrastructure, trade, investments and people-to-people exchanges. Through the BRI, China hopes to recreate the once glorious Eurasian continent trade along the ancient Silk Road, extending it geographically and expanding it to cover even more developments.

... US investments in many developing nations have declined and have been unable to meet their needs in recent years.

Connectivity based on infrastructure development is key to China’s BRI and the main selling point in encouraging regional countries’ participation. Many developing countries involved lack both technological know-how and the capacity to raise significant amounts of capital to fund the required infrastructure projects.

The BRI has attracted increasing attention from the international community. According to official data from China, 142 nations in five continents had signed various BRI cooperation agreements with China by the end of 2021.

In comparison, it is noteworthy, however, that US investments in many developing nations have declined and have been unable to meet their needs in recent years. It seems that the nascent PGII has a long way to go to become a worthy competitor of the BRI.

First and foremost, the US and other fellow G7 countries must convince the global community that it can provide a credible alternative that is superior to China’s BRI in urgently upgrading the infrastructure in a vast number of developing nations.