How much help should Taiwan offer Hong Kong protesters?

Young Hong Kong protesters seem to take for granted that they have the support of other countries and regions. How accurate is that perception? Veteran China affairs journalist Han Yong Hong analyses the recent war of words over the prospect of Taiwan enacting a law to help Hong Kong asylum seekers, and dishes out a dose of realism in her assessment. 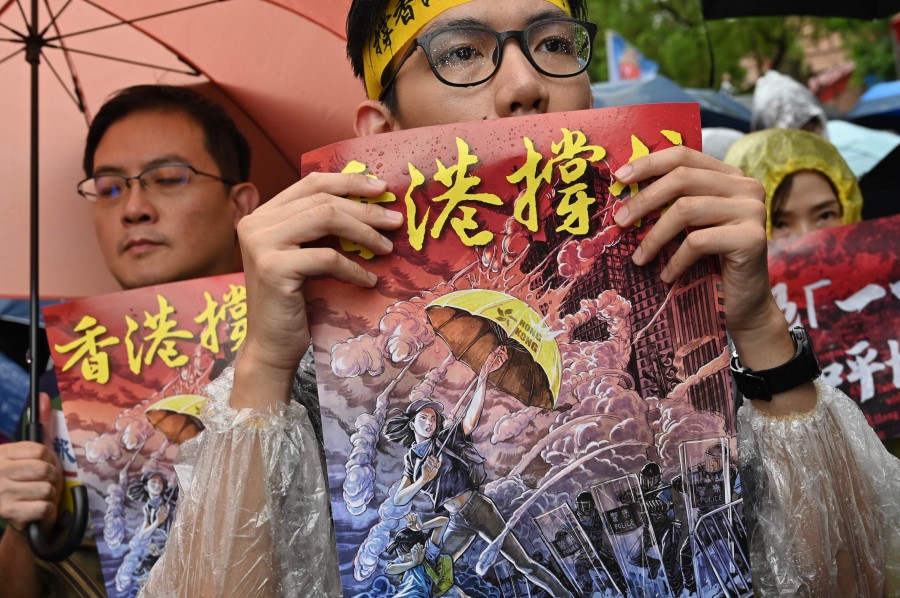 Hong Kong youth protesters think they can count on external support. But can they really? (Sam Yeh/AFP)

Candice Chan - 27 July 2021
When Lloyd Austin, the US Secretary of Defense, speaks at the 40th Fullerton Lecture in Singapore tonight, he will need to go beyond speaking about esoteric concepts such as the “rules-based international order” and promise that Washington will provide tangible deliverables in the form of pandemic assistance, economic growth and trade.
Read more Candice Chan - 27 July 2021
Analyst Zheng Weibin notes that the clampdown on Didi shows that the competitive relationship between China and the US has affected the global interactions of tech giants, and political factors will matter more in global investments of startups in China. In the aftermath, will technological innovations such as digital manufacturing through artificial intelligence be straitjacketed?
Read more

Candice Chan - 22 July 2021
In recent years and since the pandemic led to the surge in live streaming, e-learning and other online activities, the demand for cloud computing and related services has increased significantly. Chinese companies led by frontrunners Huawei, Tencent and Alibaba are launching into all-out competition in the cloud services sector. In particular, Huawei Cloud experienced a surge in year-on-year earnings of 168%, despite US sanctions. Huawei Cloud is also aiming to clinch the top spot in the sector, erstwhile occupied by Alibaba Cloud. Caixin journalist Zhang Erchi takes a deep dive into the issue to get a sense of who's really leading the fight. In part one of the story, he focuses on Huawei.
Read more

Candice Chan - 22 July 2021
Zaobao correspondent Edwin Ong notes that even as disaster relief continues after massive floods in Zhengzhou, people are pointing fingers at the authorities, saying that early alert systems and coordination between agencies can be improved. As natural disasters increase due to climate change, will governments be forced to pay greater attention to preparing for unforeseen events?
Read more

Candice Chan - 22 July 2021
Leaked data from one platform company may not pose a major national security threat, but data from multiple platforms combined might, warns technology specialist Yin Ruizhi. As countries become more wary of internet security risks, it will be increasingly difficult for platform companies to get listed overseas. What is the alternative then?
Read more
Translated by Candice Chan on 13 December 2019

With less than a month to go before Taiwan’s next presidential election, a war of words is ensuing between the young people, politicians, and internet community of Taiwan and Hong Kong.

Taiwan President Tsai Ing-wen and Foreign Minister Joseph Wu have taken turns to respond to strong words by Keith Fong, student union president of Hong Kong Baptist University, criticising Taiwan for not enacting any laws to help Hong Kong's protestors. While the involvement of Tsai and Wu has lent much weight to Fong’s comments, the young man at the centre of the storm has publicly apologised. He would have a lot to answer for if his comments boost support for the Kuomintang (KMT) and weaken support for the pan-Green coalition in Taiwan.

Even though many feel that Fong’s tirade was his honest opinion, what he did not realise is that in international affairs, some words are off-limits. Such "honesty" can come across as tactless. It puts people off and may, in fact, make them less willing to engage or negotiate with the Hong Kong protesters.

It all began at a press conference on 3 December, when the Hong Kong Higher Institutions International Affairs Delegation (HKIAD) called on the Taiwan government to set up a system or draw up a “refugee law”, or amend the existing Laws and Regulations Regarding Hong Kong & Macau Affairs (《港澳条例》) or come up with a clear “assistance plan” to help Hong Kongers get political asylum in Taiwan and make it easier for them to settle down in Taiwan.

Their requests met a cold reception. The invitees from Taiwan's Mainland Affairs Council (MAC) and National Immigration Agency did not turn up, while President Tsai and the MAC subsequently declared there was no need for a refugee law, emphasising that the current laws on Hong Kong and Macau are sufficient help for Hong Kongers.

The fact is, because there is no designated mechanism or channel for Taiwan’s laws on Hong Kong and Macau, no Hong Konger has ever been granted asylum under this law.

A disappointed Keith Fong took to Facebook to blast Taiwan’s Democratic Progressive Party (DPP) for “just wanting to get votes through the blood of Hong Kongers”. He claimed that given the threat of martial rule by the Chinese Communist Party (CCP), it is a “necessary duty and strategy for Taiwanese to rescue Hong Kongers”, and warned that if Hong Kong “falls”, Taiwan will be left completely isolated.

Keith Fong’s indignant remarks about DPP votes being won through the blood of Hong Kongers shows the young protesters’ self-centredness, naivety, and unrealistic expectations of the world.

Some leaders of Hong Kong’s “yellow camp” were also unnerved, and criticised Fong for making “thoughtless comments” that “do not represent Hong Kongers”. They said Fong was like an ill-bred child who scolds the nice lady next door for being nasty if she does not dole out pocket money. Following Keith Fong’s apology, the HKIAD also released a statement of apology on behalf of all its members.

As to the claim that the DPP is raising its popularity through the Hong Kong protests and is making use of Hong Kong, such comments have been swirling around in Taiwan since July this year and the KMT has attacked the DPP on the issue. From a neutral point of view, these are electoral moves and the comments are valid.

However, Keith Fong’s indignant remarks about DPP votes being won through the blood of Hong Kongers shows the young protesters’ self-centredness, naivety, and unrealistic expectations of the world. The Hong Kong protests that broke out in June were not started by Taiwan, nor did Hong Kongers turn violent for the sake of Taiwan or the DPP. To claim that Taiwan has responsibility just because the DPP is benefiting from the protests is not sound.

Taiwan’s priority is its own interests. And if Ms Tsai does get elected, after this Keith Fong incident, will she allow the political asylum that the Hong Kong youth protesters are asking for? That is unlikely.

On the other hand, the HKIAD apology was an acknowledgement of Taiwan’s assistance in Hong Kong’s protest efforts. It revealed details of how Taiwan provided logistics and materials, such as sending a large number of helmets for the Hong Kong protesters. This shows that the people of Hong Kong and Taiwan are working together on a practical level to resist Beijing.

On 8 December, Jimmy Lai, founder of Hong Kong’s Apple Daily, wrote an open letter calling on the Hong Kong protesters who have moved to Taiwan to settle down for a while and not rush to go back. He wrote that there will probably be more Hong Kongers moving over to Taiwan, and after the Taiwan election, the Hong Kong pan-democracy camp can help negotiate and organise resources to support their stay. He is practically assigning tasks and treating Taiwan as a safe haven for Hong Kong. He even pandered to the incumbent government, writing that Ms Tsai has a very good chance of getting elected, but she does not want to make her support for Hong Kong too obvious, for fear of repercussions from mainland China.

The thing is, Taiwan’s leaders have been open and clear in their public support for Hong Kong's protests. Are they even thinking about mainland China's reaction? But Taiwan's support is by word of mouth and in spirit, and its top priority is its own interests. If Ms Tsai does get elected, will she allow the political asylum that the Hong Kong youth protesters are asking for? That is unlikely. Hong Kong’s protests are great for encouraging Taiwan’s anti-mainland sentiment, hence Hong Kong and Taiwan will continue to be linked. However, having young Hong Kong radicals in Taiwan adds an element of instability, as proven by this incident. The Taiwan authorities will consider more carefully whether to engage openly with them or give them support.

Some countries and regions have expressed support for Hong Kong's protests, but only as far as it is beneficial for themselves. And if the young protesters cannot see that and think that they can count on external help in their resistance against mainland China, they may well end up “completely isolated”.