The joint statement issued following the Quad leaders’ summit in Tokyo on 24 May neither condemned Russia’s invasion of Ukraine nor committed the quartet to imposing economic sanctions on Russia. The twin failure or reluctance was largely attributed to India’s unwillingness to jeopardise its deep ties to Russia. But even before the Russia-Ukraine conflict, analysts have been describing India as an “outlier” in the group. Is India really the weakest link, or will it eventually emerge as the keystone in the quartet? 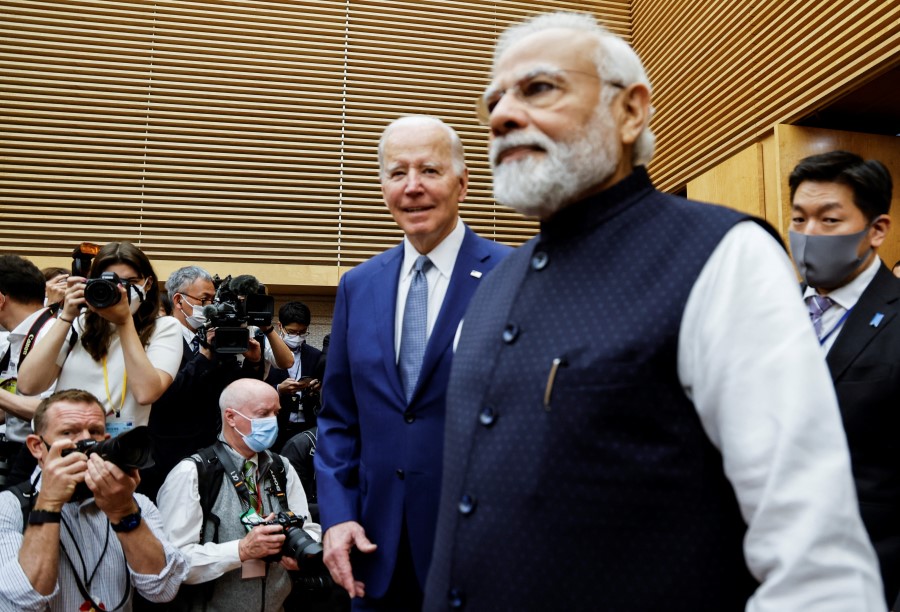 Candice Chan - 20 June 2022
The newly launched Indo-Pacific Economic Framework for Prosperity has arguably low or no ambition around market access, but perhaps because of its non-contentious nature, could be a promising start. Countries in the region welcome options amid fears of Chinese economic coercion and may just provide the momentum needed when the time is ripe.
Read more
Translated by Candice Chan on 14 June 2022

Prime Minister Shinzo Abe pioneered the idea of the Quad over a decade and a half ago. President Trump toyed with the idea of reviving the Quad as a “trump card” for his Indo-Pacific strategy in late 2017. Following President Biden taking office, the US administration aka Pentagon pushed the four-nation grouping onto centre stage in March 2021 as an integral part of US foreign policy to “contain” and “blockade” China.

However, in spite of President Biden’s relentless efforts to expedite upgrading Quad effectiveness on par with NATO in the Asia-Pacific region with breakneck speed — two virtual and as many in-person Quad leaders' summit in 15 months — India remains “suspect” in the eyes of the group’s other three members, i.e. the US, Japan and Australia.

India a black sheep of the Quad

On the day of the summit in Tokyo, 24 May, China’s ever-vigilant Cankao Xiaoxi, a Chinese “reference news network” which specialises in scrutinising and selecting opinion pieces from foreign newspapers/media publications, reported that Japan’s leading daily newspaper Asahi Shimbun had published a story entitled “How to Win Over India?”

The US too was visibly miffed at New Delhi’s refusal to both condemn and impose sanctions on Russia, either at the Tokyo summit or unilaterally.

According to Cankao Xiaoxi, the Japanese report casting doubts on India’s commitment to Quad said: “India implements a non-aligned diplomatic strategy and has been cooperating with different countries in different fields. Among them, India and Russia have deep historical ties. Many weapons in India are made in Russia. India (along with China) and others abstained when the UNGA voted on a draft resolution condemning Russia last March. India’s approach is significantly different from the approaches of the US, Japan, and Australia.”

More significantly, as reported by Cankao Xiaoxi, the Asahi Shimbun noted that at the Tokyo summit Japan, the US, and Australia “focused” on how to win over India. Concerned that India’s presence in the group could disrupt the pace of effectively “slowing down” the fast-spreading Chinese economic and military assertiveness in the region, a Japanese foreign ministry official could not hide his frustration over the Indian dilemma and warned: “India will quit the quartet once it is asked to choose between the Quad and Russia.”

The US too was visibly miffed at New Delhi’s refusal to both condemn and impose sanctions on Russia, either at the Tokyo summit or unilaterally. In fact, the White House did make efforts (prior to the fourth Quad leader’s summit) and hurriedly convened an unscheduled summit meeting virtually on 3 March, following the Russian invasion, to try and reach a consensus among the four Quad member nations but to no avail. According to Sheila A. Smith of the Council of Foreign Relations, “the leaders reportedly discussed their responses to the conflict but stopped short of condemning Russia’s invasion”.

... New Delhi by now had its own reasons to be too sceptical of the other three group partners to sacrifice its own security interests for the sake of the Quad.

Australia, the fourth member of the group, on the other hand, has had its own chequered trajectory with Quad. For years after the Australian Labor Party Prime Minister Kevin Rudd “killed” Quad 1.0 by walking out of the group in 2008, Canberra refused to participate in “quadrilateral” group meetings as Australia did not want to annoy Beijing.

Moreover, besides quitting the “Quad”, Australia had made it clear to the group that it didn’t want India in the group. Naturally, there were strong reactions in the Indian media at the time to the sudden, shocking “unfriendly” stance adopted by Australia towards India. A Times of India article at the time, cited unnamed government sources saying: “The Australian decision to tilt openly towards Beijing will have inevitable consequences in New Delhi.”

Additionally, New Delhi by now had its own reasons to be too sceptical of the other three group partners to sacrifice its own security interests for the sake of the Quad. One, in addition to being rebuffed by Australia within Quad 1.0, the Australian leader Kevin Rudd angered New Delhi by personally flagging the decision to reverse the selling of Australian uranium to India.

Secondly, to New Delhi, perhaps more than Australia tilting towards Beijing, it was Washington that suddenly lost enthusiasm for the Quad. A report by the Australian Lowy Institute entitled “Who Really Killed Quad 1.0” stated, that during a visit to Australia in March 2007 by the experienced Indian diplomat Shyam Saran, who at the time was the Indian prime minister’s special nuclear envoy, the Australian foreign ministry officials conveyed the message “go cool on the Quad idea” which was purportedly from the White House. The reason, according to the report, was that the Bush administration did not want to upset Beijing so as to keep it actively engaged in the “six-party talks” about the North Korean nuclear programme.

Similarly, convinced that Quad 2.0 had been revived by the Biden administration to target China, Beijing first laughed at the initiative to revive the “Quadrilateral Security Dialogue” and dismissed it as a four-nation “beggar’s club”; then China started showing signs of concern as two virtual Quad leaders’ summits were convened by Biden in quick succession. Now, realising the seriousness with which the White House is singularly focused following the second in-person leaders’ summit of the quartet in Tokyo, China’s top diplomats are heard “condemning” the Quad for its “anti-China” new Cold War mindset.

... at the moment New Delhi may be enjoying conflicting assessments by others regarding it being a black sheep or dark horse.

In short, Beijing and Washington both know rather well that the Quad is important for India, and India too is increasingly being “seduced” by the idea of the quadrilateral security idea in the Indo-Pacific. What is most intriguing is that while Washington, Canberra, and Tokyo remain uncomfortable with India doggedly following its “independent” path, Beijing is also troubled by its inability to discern which way Quad headwinds will be blowing in New Delhi.

It is not surprising therefore that leading commentator Professor Liu Zongyi of the Shanghai Institutes for International Studies said not long ago: “We may still continue to pursue the line of thinking that the main pressure we are facing is from the United States and not India […] But the fact is, India and the United States today have become a single entity. In some respects, it is India which is leading the US and is becoming a leading anti-China force.”

With the quartet‘s other three members perceiving India as riddled with the Quad dilemma, and Beijing unable to see India beyond its own ambiguity, at the moment New Delhi may be enjoying conflicting assessments by others regarding it being a black sheep or dark horse.

But one thing is crystal clear, as long as the White House continues to describe Quad as not a security alliance but “a regional grouping”, not only will Beijing continue to laugh at the “anti-China clique” and make fun of its “empty rhetoric”, India too will continue to be seen more as the group’s weakest link instead of emerging the Quad’s keystone.

Related: Biden’s Asia tour: US deepening its commitments to counter China | Quad now centrepiece in India’s China strategy | Indian academic: The Quad gains momentum and China feels threatened | Be present but don't fight with China: Can the Quad fulfill this tall order from ASEAN? | AUKUS and Quad do not solve India's regional security problems | Indian academic: The Quad and ASEAN can find solutions together | Containing China: Will the Quad become an Asian mini-NATO? | Quad: Containing China should not be the raison d’être for any grouping