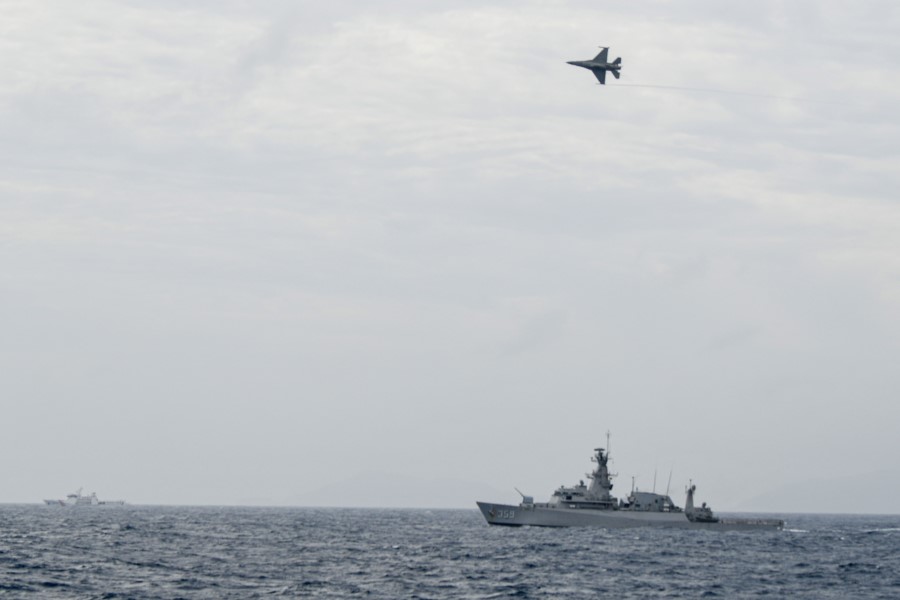 An Indonesian Airforce's F-16 jet fighter flies over an Indonesian Navy warship during an operation in Natuna, near the South China Sea, Indonesia, 10 January 2020. (M Risyal Hidayat/Antara Foto via Reuters)

Candice Chan - 28 September 2022
Hong Kong Baptist University academic Jean-Pierre Cabestan notes that Chinese President Xi Jinping will have his work cut out for him in his anticipated third term. Apart from domestic and international challenges, Xi faces opposing views on the way forward for China’s future. This is the third in a series of four articles on President Xi Jinping and the road ahead.
Read more
Translated by Candice Chan on 27 September 2021

In mid-September, a piece of not so surprising news was reported by many Indonesian national news media outlets. The Chinese survey ship Haiyang Dizhi 10 reportedly operated in the Indonesian North Natuna Sea close to an important oil and gas field. This is not the first time that a Chinese government vessel has been found manoeuvring in the area. This time, however, the Chinese survey ship was not alone. It was escorted by at least six naval vessels, including the Kunming, a 7,500-tonne Type 52D destroyer.

It appears that this is the first time China has deployed a large destroyer to the Indonesian North Natuna Sea. Previously, most incidents between China and Indonesia in the North Natuna Sea involved the Chinese Coast Guard. Therefore, Jakarta should be asking Beijing questions about its intentions.

It must be noted that the PLA Navy ships were passing through Indonesia’s Exclusive Economic Zone (EEZ), where Indonesia only has a sovereign right over the natural resource and not full sovereignty over the waters. And as stipulated under the United Nations Convention on the Law of the Sea (UNCLOS), foreign vessels, aircraft and submarines can navigate freely in a coastal state’s EEZ as long as they are not exploring or exploiting any resources.

After the incident, some Indonesian authorities said that there was no violation of Indonesian national shipping rules. Indonesia’s Maritime Security Agency said the Haiyang Dizhi 10 had its Automatic Identification System on. This meant it could be "monitored" and "was probably a normal passage". As long as the Chinese vessels were not catching fish in Indonesia’s EEZ, Jakarta should not bother about the vessel asserting the right of freedom of navigation.

However, this article takes the opposite position. The presence of the Chinese destroyer is problematic, and it is necessary for Indonesia to take some serious response to this.

Arguably, the deployment forms part of China’s assertion to its illegal nine-dash line claim that overlaps with the Indonesian North Natuna Sea.

Firstly, foreign military activity in EEZs is a major debate in international law, even during the negotiation process for UNCLOS. As the constitution for the ocean, UNCLOS does not explicitly regulate whether it is allowed for a foreign warship to conduct military activities in a coastal state’s EEZ. There are two diverging interpretations and positions on the issue. Some countries such as Brazil, Bangladesh, Cape Verde, Malaysia, India, and Pakistan have expressed concerns about military exercises and manoeuvres in their EEZs. As a result, they require prior consent for such activities. In the opposite camp, some major maritime countries such as Italy, Germany, the Netherlands, the UK, and the US argue the exact opposite. They argue that there should be freedom of navigation in EEZs, and, as a consequence, no prior consent is needed.

Despite the two diverging positions, the presence of the China destroyer in the Indonesian EEZ is problematic. China’s military presence there is not merely about asserting freedom of navigation rights in an EEZ. Arguably, the deployment forms part of China’s assertion to its illegal nine-dash line claim that overlaps with the Indonesian North Natuna Sea.

Given that the Indonesian government has a constitutional obligation to protect its citizens, Indonesia should consider a military presence in the North Natuna Sea to assure fisherman there.

Thirdly, based on information from Indonesian fishermen in the North Natuna Sea, the presence of the Chinese warship threatened their fishing activities. Therefore, it can be argued that the Chinese deployment threatened Indonesia’s sovereign right to explore and exploit its fishery resources, which is authorised under international law. Given that the Indonesian government has a constitutional obligation to protect its citizens, Indonesia should consider a military presence in the North Natuna Sea to assure fishermen there.

Flowing from this, the Indonesian government should do three things. First, Indonesia should send a diplomatic protest because the presence of Chinese warships threatened Indonesian fishermen who were exercising Indonesia’s sovereign resource rights in the EEZ. Secondly, Indonesia should ask for further clarification and information regarding what data were gathered by the Haiyang Dizhi 10. Finally, Indonesia should have an integrated national policy for the North Natuna Sea and increased coordinated patrols in the area. A response based on international law, and backed up by patrols, should give Beijing some cause for pause.