A new maritime training centre established by Indonesia and the US is emblematic of sustained bilateral cooperation in the maritime domain, and the ASEAN member state’s independent and active foreign policy. 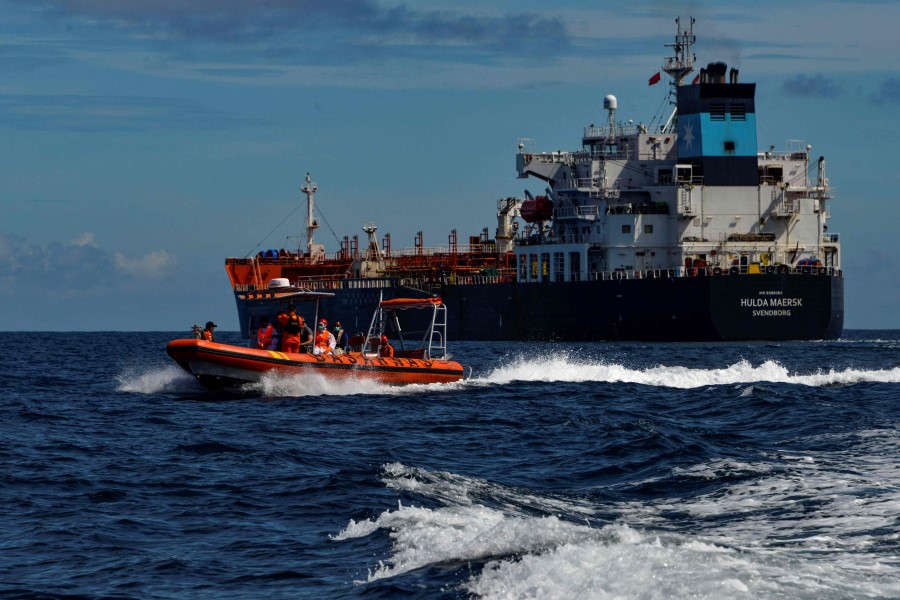 A dinghy (left) from Indonesia's National Search And Rescue Agency (BASARNAS) returns to their vessel after evacuating a Russian crew member from the Danish tanker Hulda Maersk (right) for medical reasons, at sea off the coast of Aceh on 27 April 2021. (Chaideer Mahyuddin/AFP)

Candice Chan - 30 September 2022
Chinese President Xi Jinping was not seen in public for over a week after attending the Shanghai Cooperation Organisation summit in Uzbekistan, sparking rumours of a “coup” ahead of the 20th Party Congress. Zaobao associate editor Han Yong Hong looks into the phenomenon, noting that in fact the 20th Party Congress has seen relatively few rumours surrounding it.
Read more
Translated by Candice Chan on 8 July 2021

The first six months of 2021 have been hectic for Indonesia’s defence and maritime security partnerships with major powers around the world. The country signed the first ever bilateral defence agreement with Japan in March, conducted a joint naval exercise with China in waters off Jakarta in May, and signed a deal in mid-June to buy eight frigates from Italy. In another development that demonstrates Jakarta’s multi-directional outreach to best meet its security needs, Indonesia and the US held a groundbreaking ceremony on 25 June to establish a Maritime Training Centre in Batam.

The Maritime Training Centre with a US$3.5 million price tag is a cooperation project between the Indonesian Maritime Security Agency (BAKAMLA), the US embassy in Jakarta, and the US State Department’s Bureau for International Narcotics and Law Enforcement Affairs (INL). As the largest archipelagic state in the world, maritime security is a constant daily concern for Indonesia, including transnational organised crime at sea such as piracy, illicit drug trafficking and people smuggling. In addition, the Jokowi administration attaches high priority to tackling illegal, unreported and unregulated (IUU) fishing and other encroachments on Indonesia’s maritime jurisdiction to secure its national security and sovereign rights over maritime resources.

These growing maritime security challenges require Indonesia to have a capable maritime law enforcement authority. BAKAMLA is essentially Indonesia’s Coast Guard with the mandate to be the leading authority in coordinating maritime law enforcement activities among relevant Indonesian institutions, including the Indonesian Navy and Police. Until today, BAKAMLA does not have a well-established maritime security training centre. The forthcoming Maritime Training Centre in Batam will help BAKAMLA enhance its maritime law enforcement capacity in tackling multifarious maritime challenges. Speaking at the ground-breaking ceremony, US ambassador to Indonesia Sung Kim highlighted US commitment to support “Indonesia’s important role in maintaining regional peace and security by fighting domestic and transnational crimes”.

Following China’s assistance in the retrieval of the sunk Indonesian Navy submarine KRI Nanggala and substantial supplies of Sinovac vaccines, many commentators see Indonesia as taking a closer step towards Beijing. However, such a reading fails to account for the omni-directionality in Indonesia’s external security partnerships, including with Washington.

The centre is associated more closely with the so-called non-traditional aspects of maritime security. Still, its establishment carries a significant geopolitical message about Indonesia’s free and active foreign policy which seeks to maintain the country’s neutrality amid the growing US-China rivalry, while securing the best facilities and conditions to protect its maritime interests, especially in the South China Sea. The establishment of the centre in Batam, which is near the North Natuna Sea and Malacca Strait, is also strategically important.

Although Indonesia does not see itself as a claimant to the South China Sea disputes, tensions have escalated in the last decade between Indonesian fishermen, law enforcement and even navy vessels with China’s fishing, coast guard and navy vessels in the North Natuna Sea. China does not lay a sovereignty claim over the Natuna Islands but the waters surrounding this island group fall within China’s nine-dash line, which has been declared unlawful according to the 2016 arbitral tribunal’s award. The introduction of China’s new coast guard law earlier this year, which allows its coast guard vessels to fire at foreign vessels in China’s claimed territory, has raised further concerns among Southeast Asian littoral states, including Indonesia. This makes it all the more urgent for Indonesia to increase its maritime security capabilities in response to the increased deployment of Chinese maritime assets in the North Natuna Sea.

The South China Sea disputes, however, have not prevented Indonesia from deepening its relations with China, especially in economic exchanges and Covid-19 pandemic response. Following China’s assistance in the retrieval of the sunk Indonesian Navy submarine KRI Nanggala and substantial supplies of Sinovac vaccines, many commentators see Indonesia as taking a closer step towards Beijing. However, such a reading fails to account for the omni-directionality in Indonesia’s external security partnerships, including with Washington.

The Maritime Training Centre should be set in the wider canvas of Indonesia-US defence and maritime security cooperation that has gained momentum after the official visit to Washington by Indonesian Defence Minister Prabowo Subianto last October. In an interview in June last year, Vice Admiral Achmad Taufiqoerrochman, Vice Chief of the Naval Staff and also BAKAMLA Chief, noted that Indonesia’s cooperation with the US and ASEAN countries would increase. This will include cooperation in capacity-building, training, education, information and intelligence sharing.

As for the US side, the Maritime Training Centre is part of Washington’s broader efforts to help Southeast Asian claimant states to the South China Sea strengthen their maritime security capabilities, especially the Philippines, Vietnam, Malaysia and Indonesia. These include, among others, “increasing Indonesia’s patrol capacity, ISR [Intelligence, Surveillance and Reconnaissance] integration and maintenance capacity to enhance the Indonesian government’s ability to protect its maritime areas, safeguard its natural resources.” It will also encompass “supporting the Indonesian Coast Guard’s organisational development, focusing on human resource capacity, technical skills and educational partnerships”.

The significance of these partnerships, including the Maritime Training Centre project, is measured not only in dollar terms but also in the symbolism of Indonesia-US sustained security cooperation in the maritime domain. This has been amplified with similar maritime security partnerships between Indonesia and other US allies and partners such as Japan, India and the Republic of Korea. As geopolitics in the region becomes all the more competitive and contested, this project once again manifests Indonesia’s independent and active foreign policy that keeps expanding its options and partners to best meet its security interests.