The lies of globalisation

Seeing what was going on in China and how this would affect global supply chains, the West should have predicted the pandemonium they are facing now, says Chip Tsao. One radical thought he proposes is to impose a forced lockdown of the world, letting the virus die a natural death. But even that is but an impossible dream. Ultimately, the pandemic's greatest gift to mankind is forcing one and all to confront the hard truths of globalisation. 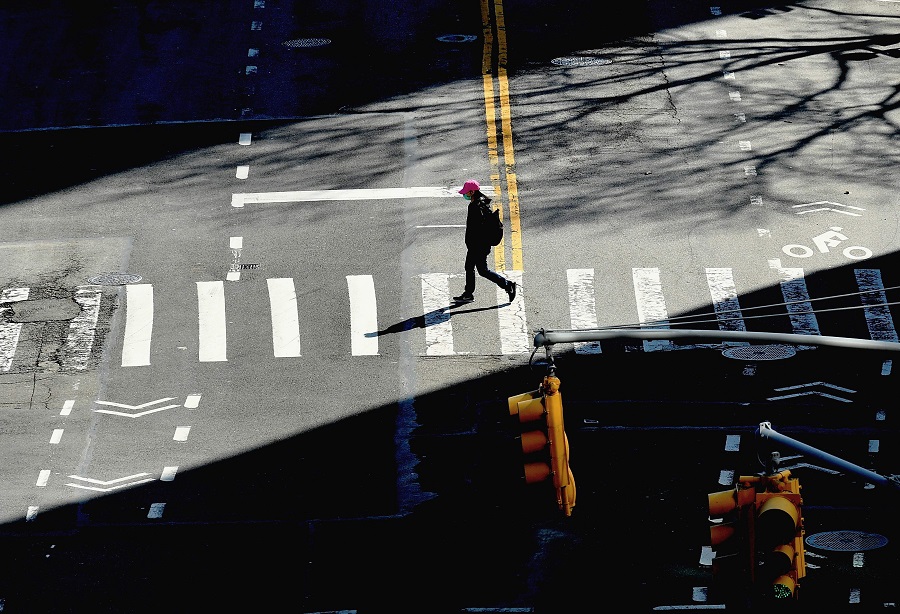 A person crosses the street on 27 March 2020 in New York City. (Angela Weiss/AFP)

Grace Chong - 23 September 2022
While Chinese President Xi Jinping is likely to secure a third term at the 20th Party Congress, Loro Horta recalls the saying that one should “be careful what you wish for”. The road ahead in his third term looks to be fraught with challenges, both domestically and externally. This is the first in a series of four articles on President Xi Jinping and the road ahead.
Read more
Translated by Grace Chong on 31 March 2020

The “Wuhan coronavirus”* has escalated into a global pandemic and completely destroyed the globalisation myth that lasted some 20 years.

China was right in deriding the way the US and the West had wasted two precious months in slowing down the spread of the coronavirus. The Wuhan coronavirus broke out on all fronts in mid-January and Wuhan was locked down on 23 January. Yet Europe and the US watched from the sidelines, viewing it as a normal flu. They thought even if it was an epidemic, only those with Asian genes would be sickened and it would not spread to the West.

The Wuhan coronavirus battered China for two months, and a bunch of fools passively stared at the situation, convinced that the virus will only stay within China and not spill over to other countries.

It seemed as if the leaders of the US, UK, Germany and the European Union (EU) based in Brussels had all forgotten a word they often use, a term that is frequently bandied about — globalisation.

What is globalisation? The West has a multitude of theories and past experience to characterise its ills: the so-called “butterfly effect”, the “domino effect”, or the Wall Street Crash of 1929 that quickly forced European and German banks into bankruptcy, and led to the rise of Nazi Germany and Adolf Hitler. How could the West have ignored historical precedents of catastrophic events triggering a chain reaction of disasters?

Aren’t there such a large number of think tanks, experts, and scholars out there? The Wuhan coronavirus battered China for two months, and a bunch of fools passively stared at the situation, convinced that the virus will only stay within China and not spill over to other countries.

During that period, they even donated masks to China — the Wuhan coronavirus not only put a halt to the global economy, it made the brains of globalised elites stop functioning or pause for two months.

And finally, Italy descended into chaos, corpses filled Spain, the UK came to a standstill, and California and New York on the US West and East Coast respectively began rotting away.

Confirmed cases soared past 10,000 in the US, and the Port of Los Angeles was shut down. (NB: The US’s count of confirmed cases currently stands at over 188,000.) 40% of the US’s imported goods have to pass through Los Angeles and 10% of the working population in California depend on the transportation industry. When California was hit by the Wuhan coronavirus, one million people immediately filed for unemployment benefits.

Neither did the Wall Street financial sector expect the situation to be so serious within two months. No matter how crude — and even ugly — China’s containment measures have been over the last two months, the West’s biggest mistake was to believe that the pandemic had nothing to do with them.

The pandemic first destroyed China’s productive forces and later ruined the West’s purchasing power. The single supply and demand chain that spans across the Pacific has been broken just like that.

Yet, even if the pandemic had the ability to distinguish between different races and only infect the yellow-skinned, China’s alarming statistics should have alerted the so-called elites of the West long ago. Due to the Wuhan coronavirus, China’s industrial output dropped by 3.5%, service products decreased by 13%, and the manufacturing industry suffered the most damage, with a plunge of over 15%. Additionally, first-quarter estimates for China’s auto sector indicate that auto manufacturers are estimated to suffer losses of 32% in the first three months of 2020, with earnings from the retail industry and exports going down by 23% and 17% respectively.

As a manufacturing powerhouse of the global supply chain, how can happenings in China not affect the West? From the time China went from imposing a national lockdown to suffering a plunge in its economy and then ordering a resumption of work, the virus has since migrated to the West and it’s now their turn to shut their borders, lock down their countries, and suffer huge losses on their own.

Now, even if China issues an executive order in the name of maintaining its economic stability to forcibly get all its factories to resume work, orders have been lost and there’s no longer a backlog of work to do.

For example, Peacocks (a UK clothing company) has already cancelled the orders of close to 14,500 pairs of jeans from a Bangladeshi jeans factory. As a result, Bangladesh’s exports decreased by 10%, or put over four million people out of a job nationwide.

If this is the case with Bangladesh, what about China then? The pandemic first destroyed China’s productive forces and later ruined the West’s purchasing power. The single supply and demand chain that spans across the Pacific has been broken just like that.

Artificial satellites will look down on Earth and see empty streets in every city, village and town of the entire world. And this will last for 30 days.

Let’s not talk about the countless restaurants, hotels, airline companies and shopping malls that have closed — the consumer services sector is already eliminating millions of people off the job market presently.

And what’s the result of this? The Great Depression that lasted between 1929 and 1933.

The US Federal Reserve immediately cut interest rates, announced quantitative easing measures and passed a US$2 trillion Covid-19 aid package many times larger than the US$700 billion financial bailout package issued during the Financial Crisis of 2008. The difference is, Americans could still spend money and freely move about restaurants and bars during the financial crisis — and remain safe doing so.

Now, even if they did as Mitt Romney suggested and gave US$1000 to every US adult to manage the impact of the coronavirus, the government’s warning remains to stay home and not go outside. Thus, even if the citizens have cash, the state still can’t be saved from ruin because of the mayhem caused by the coronavirus.

So when can we go out and spend money again? Just like the Black Death of medieval times, nobody knows when the pandemic will end.

Therefore, the only way out is to force the world to grind to a halt. Over 200 countries worldwide will be locked down at the stroke of midnight on a certain day. 7.7 billion of the world’s population will stay at home. Artificial satellites will look down on Earth and see empty streets in every city, village and town of the entire world. And this will last for 30 days.

During this period, governments can subsidise the housing rentals and utility bills of all citizens, and only allow medical staff to work. The military will don protective gear and be put in charge of transporting food. Poor families can have the food for free, while middle-class families can have them at half price.

For one month, the working population will not receive salary and tenants need not pay rent. Employers should not distribute food and the world’s actions are uniform and consistent. Losses will be limited, and the virus withers and dies in air that no man breathes in.

Apart from this, there is no other way.

It is said that the United Nations (UN) governs the world — does it have the power to do this? The EU is also a regional organisation that speaks with a single voice — does it possess such control over the world? There is a large volume of multinational organisations in this so-called globalised world. On normal days, the elites of these organisations engage in boastful speech at international conferences. When true action needs to be taken, however, none of them are driven and daring. Besides, various governments of the world have their own bureaucratic systems and vested interests. No one powerful UN can become the world’s provisional government and lead all of mankind out of the current tragedy.

The greatest gift that this pandemic that started from China has brought to mankind is to have utterly exposed the lies of globalisation.

This article was first published in Chinese on CUP media as "瘟疫摧毁了「全球化神话」".

Related: When the narcissists of London and New York meet the coronavirus | China’s economy in worst shape in 30 years | Globalisation as we know it shall come to an end