The Covid-19 pandemic has brought China’s economy to a low point. Economic forecasts for the quarter and the whole year have been revised downward, and the continued spread of the coronavirus across the world will not help the situation. Zaobao correspondent Chen Jing speaks to the experts on what to expect in the next few months. 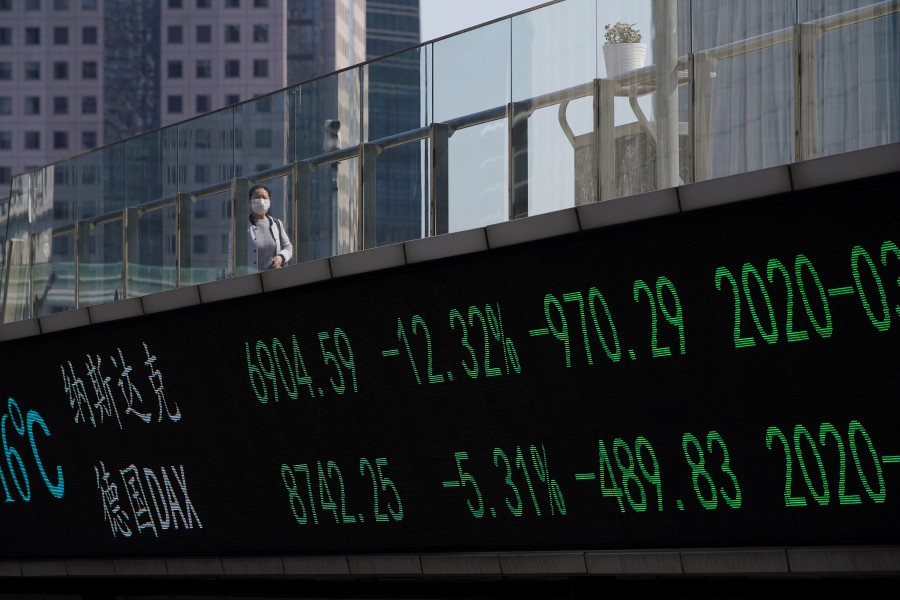 A pedestrian wearing a face mask walks on an overpass with an electronic board showing stock information, following an outbreak of the coronavirus disease (COVID-19), at Lujiazui financial district in Shanghai, March 2020. (Aly Song/REUTERS)

Candice Chan - 6 December 2022
Commentator Chen Kuohsiang notes that even after the 20th Party Congress and talks between Chinese and US Presidents Xi Jinping and Joe Biden during the G20 summit, the Chinese economy is not facing an easy time, not least because of Covid-19 controls, the US's trade restrictions and China's stringent policy on private enterprises.
Read more
Translated by Candice Chan on 17 March 2020

Even as China’s companies are not yet fully operational, Europe’s consumer markets have been nearly paralysed by the Covid-19 outbreak. With both supply and demand ends taking a hit, China’s economy may be brought to its worst shape in 30 years.

Academics and economists think there is no longer any doubt that China’s GDP growth for the year will fall below 6%, and if the global epidemic is not brought under control, it will be difficult to maintain 4% or 5% growth, while China’s timeline of achieving its goal of becoming a "moderately affluent society" (小康社会) will have to be delayed.

China yesterday released economic figures for the first two months of this year, showing a record drop. Reuter’s economists subsequently forecast China’s annual economic growth to be about 5.4%, while United Overseas Bank (UOB) revised its forecast from 5.3% down to 4.1%, the lowest since 1990, when the effects of the Tiananmen incident brought economic growth down to 3.9%.

"The problem now is that products are made but there is nowhere to export them. This is beyond the Chinese government." - Suan Teck Kin, UOB

Suan Teck Kin, head of Global Economics and Markets Research at UOB, said in an interview with Zaobao, “China’s companies have struggled to resume operations and bring supply back to normal, but many parts of Europe and the US are closed off due to the epidemic. The problem now is that products are made but there is nowhere to export them. This is beyond the Chinese government.”

A UBS report released last night forecast that the Chinese government will roll out more measures to support the economy over the next few months, while the People's Bank of China (PBOC) may also reduce the re­serve ra­tio by 100 ba­sis points. However, the report added that no matter how strong the stimulus measures were, it would be difficult for China to achieve GDP growth of above 5%, or even 3%.

At a press conference yesterday, National Bureau of Statistics spokesperson Mao Shengrong admitted that the epidemic was having “quite a big impact” on China’s economy. However, he felt the effect would be “short-term and external”, and would not change the long-term positive direction of China’s economy.

As the government’s buffering policies take effect, the economy will be more stable in the second half of the year.

Mao said the domestic impact of the epidemic on China will lessen in the second quarter, when economic activities that were previously suppressed will resume and lead a clear economic rebound. As the government’s buffering policies take effect, the economy will be more stable in the second half of the year.

He said China’s first-quarter economic growth would mainly depend on how the economy performs in March, which would account for about 40% of first-quarter performance, a higher percentage than January and February. As companies resumed operations in mid to late February, the economy would take an upturn in March.

However, Suan Teck Hin of UOB pointed out that even if China’s economy fully recovers this month, it would be difficult to overcome the negative impact of the first two months. He said, “It is not easy to fully resume operations in March. Right now, outside of Hubei, 95% of large-scale companies with annual profits of over 20 million RMB or S$4.06 million are back in operation, but less than 60% of small and medium enterprises (SMEs) have resumed operations.”

To help SMEs, PBOC reduced the reserve ratio by 0.5 to 1 percentage point for eligible banks from yesterday, to go towards strengthening credit support for SMEs. China’s stock markets were expected to go up because of this move, but the Shanghai and Shenzhen markets ended up starting strong and ending weak.

Suan thinks that the inability of PBOC’s move as well as interest rate cuts by the US Federal Reserve to lift the stock markets shows that China’s investors are guided by the economic indicators they see around them and are very worried about the effect of the pandemic on the economy. He forecasts that as Covid-19 spreads across the globe, other countries’ stock markets will also be shaken by an economic slide.

The day before the economic figures for the first two months of the year were released, the People’s Daily quoted Chinese Academy of Social Sciences vice president Cai Fang saying that the epidemic was having a one-off impact on economic activity, and the target of becoming a moderately affluent society by 2021 will be met as scheduled. Cai felt that if China’s GDP growth hits 5.7% for the year, and per capita disposable income hits 1.9%, China can meet its target of doubling its GDP and per capita income of urban and rural residents from the 2010 figures (两个“翻一番”目标) this year, and also bring 5.5 million rural residents out of poverty.

However, Professor Chen Bo of Huazhong University of Science and Technology thinks that based on the current situation, it will be difficult for China’s economy to see 5% growth.

Prof Chen said, “In setting the target for the moderately affluent society, nobody foresaw the epidemic. This is out of human hands, and there is no shame in delaying the timeline by one year. It is better to face facts and handle the epidemic.”

"The unemployment rate went up by one percentage point in February, meaning 5 million people lost their jobs in the epidemic. And this might be just the start." - Prof Chen Bo, Huazhong University of Science and Technology

He added that the shutdown of various places in Europe and the US will hit their local economies. “European economies are closely linked. If one country stops, other countries will be affected. The US economy is relatively less reliant on externalities, but the Federal Reserve cutting rates twice is sending a strong signal that the economy is in tough times. Once these economies slide, it will weaken China’s external demand, and hinder China’s economic growth,” he said.

In Prof Chen's assessment, the low- to middle-income group who have lost their jobs amid the epidemic are the most vulnerable: “China has 500 million working persons. The unemployment rate went up by one percentage point in February, meaning 5 million people lost their jobs in the epidemic. And this might be just the start. Helping to tide these people over will stop social conflict and drive domestic consumption.”

According to Reuters, Goldman Sachs cut its estimate for China's first quarter gross domestic product to a year-on-year contraction of 9% from a previous forecast of 2.5% growth, citing "strikingly weak" economic data in January and February. Goldman said in a note on 17 March that with the pathogen spreading rapidly in other countries, growth outside of China is expected to slow significantly in the second quarter, with any recovery in Chinese economic activity likely to be constrained. Goldman would not expect China's GDP to return to the pre-virus trend until the third quarter. It lowered its full-year GDP forecast to 3% growth from a previous estimate of 5.5%.

Related readings: A better, stronger China after the epidemic? But at what cost? | Restoring global supply chains at 'the speed of China’ | Covid-19: Can the global economy operate without China? [Part One]