Analyst Zheng Weibin says that as the Trump administration continues to target China without a clear shape to its strategic competition strategy, Beijing cannot afford to think that it can brazenly respond in kind. Employing stealthy guerrilla warfare tactics may be more appropriate. 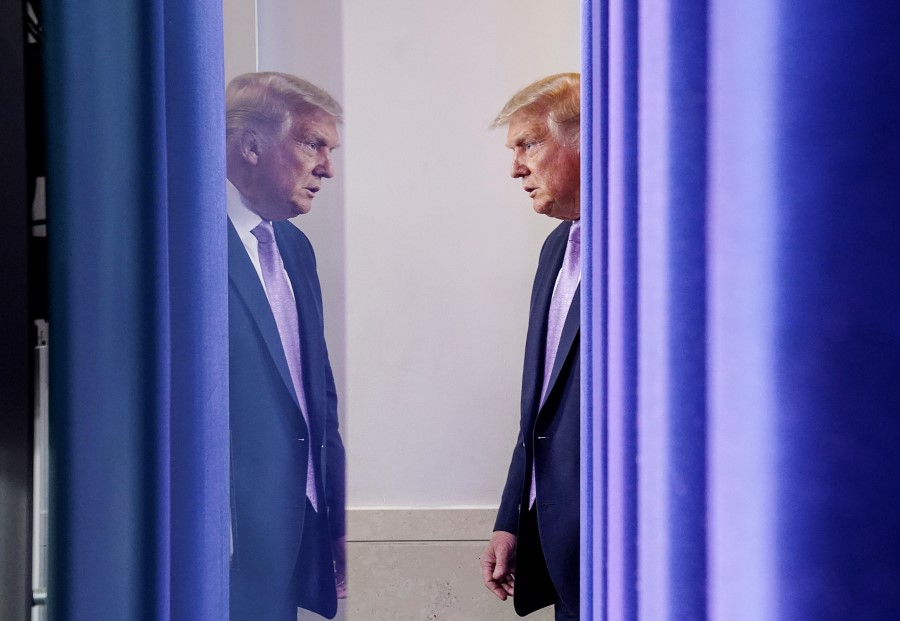 US President Donald Trump arrives to address a briefing on the coronavirus disease (COVID-19) pandemic at the White House in Washington, 13 August 2020. (Kevin Lamarque/REUTERS)

Candice Chan - 30 January 2023
A mall in Shenzhen came under fire for putting up white lanterns with black text as part of its Chinese New Year decorations, while an “ugly” rabbit-shaped light decoration was removed from another mall in Chongqing. Academic Zhang Tiankan muses on tradition and innovation, and the evolution of traditional decorations.
Read more
Translated by Candice Chan on 19 August 2020

On 9 August, US Secretary of Health and Human Services Alex Azar visited Taiwan. He was the highest-level US official to do so since 1979 when the US broke off diplomatic ties with the “Republic of China”. Clearly, the Trump administration wants both sides of the Taiwan Strait to notice this show of actively warming US-Taiwan relations, and use the Taiwan issue to put pressure on China.

Right now, from trade and the economy to technology and finance, to the South China Sea, Hong Kong, Taiwan and Xinjiang — all these are areas of total, confrontative strategic competition between China and the US, which is set to be a long fight.

In the context of China-US relations, the Taiwan issue is weightier than the South China Sea and other issues, and more likely to touch a nerve and trigger Beijing, which would set off a figurative diplomatic earthquake. Sending the secretary of health and human services rather than a figure in key domains such as the national security adviser or the assistant secretary of state for East Asian and Pacific affairs also means that the US is maintaining some restraint and prudence.

Only thing is, how long can this prudence last? Under the new normal of almost total competition between China and the US, the ever-simmering Taiwan issue will only add to the imbalance of an already fragile cross-strait order.

The US under Trump is unlikely to show restraint

For example, despite clear diplomatic ties between mainland China and the US, when it comes to the Taiwan issue, the three joint communiques between the US and China form the basis of how the three parties interact, and gives some room for strategic ambiguity. Given this ambiguity, the US uses its domestic laws to handle its relationship with Taiwan. This is why the Taiwan Relations Act was passed in 1979, as a key legal basis for maintaining relations over all these years.

Despite Trump’s frequent boasts about how he is in control, in fact he has no idea how to engage in strategic competition with China.

As for the “legality” of the US health secretary’s recent visit to Taiwan, that is based on the Taiwan Travel Act of 2018, which paved the way for visits by senior US government officials to Taiwan. Furthermore, in recent years, US Congress passed other laws such as the Asia Reassurance Initiative Act of 2018 and the Taiwan Allies International Protection and Enhancement Initiative Act of 2019.

Recently, US Republican congressmen introduced draft acts such as the Taiwan Defence Act and the Taiwan Invasion Prevention Act, to make sure that the US fulfils the Taiwan Relations Act and that Taiwan’s future would be decided peaceably. In that sense, these congressmen have become an important force in pushing forward US-Taiwan relations and defining them, and this force is quietly but constantly changing the order of cross-strait relations as established in the three communiques.

The risk and uncertainty of this model lie in Trump’s lack of control over the situation. Despite Trump’s frequent boasts about how he is in control, in fact he has no idea how to engage in strategic competition with China.

In his speech last month at the Nixon Library, US State Secretary Mike Pompeo had harsh criticisms for Beijing. However, he did not have a clear framework for engaging in strategic competition, which makes it fundamentally difficult to put it on the same level as Churchill’s Iron Curtain speech or George Kennan’s essays in Foreign Affairs magazine.

But perhaps this is where Trump succeeds. He does not go by traditional diplomatic strategy, and so his opponents do not know how to respond to his unexpected actions, or they are just tired of handling the problems he causes.

Anti-China hawks hold various positions in the Trump administration. Each has their own views and opinions, and different ideas about how to engage in strategic competition with China, but they are unable to come up with a complete solution, which might be the reason for Trump’s conflicting and wavering policies. In the end, this can only lead to total “war” in all areas between China and the US. As for the reactions these policies and decisions elicit from Beijing, or the chain reactions triggered, these are ignored or unnoticed.

This is the most unique point about the Trump administration. Trump is not a product of the traditional US school of diplomatic policy. He would not have Franklin Roosevelt’s clear-mindedness about global order, or try to build any sort of new order or rules. Looking at Trump’s style, he is more of a destroyer, full of anger at the global order that has been running for over 70 years, and anxiously looking to deconstruct it.

Beijing needs to carefully assess its strengths and weaknesses, and selectively hit back while knowing when to advance and back off, and remain steady.

But perhaps this is where Trump succeeds. He does not go by traditional diplomatic strategy, and so his opponents do not know how to respond to his unexpected actions, or they are just tired of handling the problems he causes. But this uncertainty is also precarious, especially given current rising nationalism and populism in China, the US, and Taiwan. Hostilities have been stirred up, and amid the chaos, any accidental spark might set off a powder keg.

China should go the route of a ‘guerrilla war’

As for Beijing, generally speaking, given the context of the US’s full-on strategic containment of China, it is difficult for Beijing to launch a complete and equivalent response. Even in the area of economics where the gap between China and the US is the smallest, the difference in strength between both countries dictates that China cannot hit back in kind, much less in other areas where the gap is larger.

Now, the US and China are in a long “territorial war”. If Beijing is too strong in wanting parity, it might end up biting off more than it can chew, and find itself stuck in a situation where it cannot move at all. China does not have what it takes for an all-out resistance, so a “guerrilla war” might be a more appropriate response. In a lengthy fight on the brink involving multiple areas, Beijing needs to carefully assess its strengths and weaknesses, and selectively hit back while knowing when to advance and back off, and remain steady.

Whether it is the international order that is currently being shaken up, or cross-strait relations, Beijing needs to prevent short-term changes from evolving into sustained shifts in order, which would lead to a disadvantageous situation for itself.

Related: Playing the China card — how far will Trump go? | Will China turn its back on the world again? | 180 years later, China is still an outsider to the Western-led world order