The most secretive party congress? Speculation around top leadership intensifies

As the 20th Party Congress continues, so does speculation on various key appointments, not least who will join the Politburo Standing Committee, and who will be China’s next premier and vice-premier. Zaobao correspondent Yang Danxu notes that news agencies are carrying various versions of this possible list — but which is more accurate and what does it tell of the CCP's future plans? 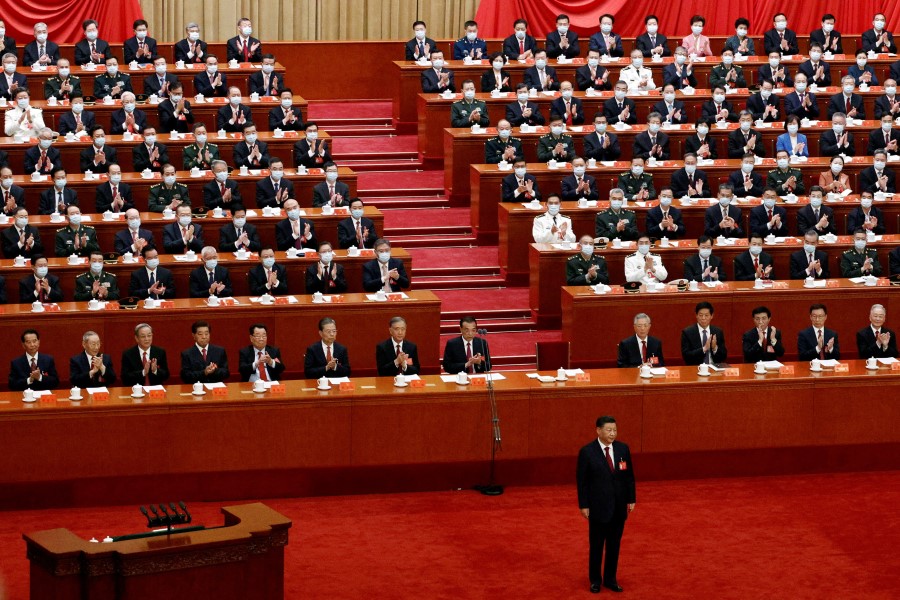 Chinese President Xi Jinping attends the opening ceremony of the 20th National Congress of the Communist Party of China, at the Great Hall of the People in Beijing, China, 16 October 2022. (Thomas Peter/Reuters)

Candice Chan - 28 November 2022
Often referred to as the world’s economic “canary in the coal mine”, South Korea has seen its economy tumble over the past year, impacted by external factors such as US interest rate hikes and signs of recession in key trade partners. The accumulation of domestic factors — currency crisis, tumbling stock market and rising inflation — is also hitting the South Korean economy hard. However, this industrial powerhouse has the domestic means to climb out of the doldrums.
Read more
Translated by Candice Chan on 19 October 2022

Who will make up the top echolon of Chinese Communist Party (CCP) leadership? This is the biggest question mark of the five-yearly 20th Party Congress, now underway. Media outlets published “exclusive” name lists of the incoming Politburo Standing Committee (PSC), as speculations reached a minor crescendo.

Politburo Standing Committee made up of Xi loyalists

In the early hours of 18 October, Taiwan’s United Daily News (UDN) published a “three up, three down” list predicting that post-60s Politburo members Ding Xuexiang, Chen Min’er and Hu Chunhua will be promoted. The list is thought to be largely in line with the traditional process of succession in the top levels of the CCP, being mostly focused on stability.

UDN quoted sources saying that after the Beidaihe session this summer, the CCP leadership drafted an initial list of the new PSC, whereby only two of the current seven PSC members — 72-year-old chair of the Standing Committee of the National People's Congress Li Zhanshu and 68-year-old Senior Vice-Premier of the State Council Han Zheng — would step down, in line with the unwritten practice of staying on at 67 years old and stepping down at 68.

However, the report said that after consultations, the average age of the incoming PSC was deemed somewhat old and was not what the party expected. The CCP leadership made adjustments thereafter and brought in 62-year-old Chongqing party secretary Chen Min’er, while 67-year-old Wang Huning will step down and be reassigned at the Two Sessions (两会, Lianghui) in March next year.

If the adjustment is true, the PSC will have four post-50s members and three post-60s newcomers. UDN also claimed that the much-observed premiership will be taken on by the incumbent chair of the National Committee of the Chinese People's Political Consultative Conference (CPPCC) Wang Yang. Historically, it is not common practice for the CPPCC chair to become premier, but Wang checks the box of having been a vice-premier.

However, The Wall Street Journal (WSJ) subsequently published a very different prediction. The report quoted people close to party leaders saying that CCP leader Xi Jinping was “preparing to name loyalists to top positions in the Communist Party hierarchy… in a move that would strengthen his hand as he confronts mounting challenges at home and abroad”.

The report said that former Zhejiang governor and current Shanghai party secretary Li Qiang is likely to be promoted to the PSC, and is also considered a leading contender to be named premier. Meanwhile, Xi’s “chief of staff” and CCP General Office director Ding Xuexiang will join the PSC and be appointed executive vice-premier. In addition, Guangdong party secretary Li Xi — also trusted by Xi — will head the Central Commission for Discipline Inspection.

However, Hu Chunhua, the youngest in the Politburo and former first secretary of the Communist Youth League, may not make the PSC.

The report claimed that besides Xi himself, Wang Huning and Zhao Leji are likely to be the only members of the current PSC to be reappointed, but with changes in their portfolio. This means that there would be four vacancies in the PSC.

If their reports are true, it would imply that Xi and his closest aides and former subordinates would dominate the new Politburo Standing Committee, while Hu Chunhua, who has Communist Youth League roots, would fall out of luck.

The WSJ’s list shocked several of my industry peers as it implied that some norms would be broken and the earlier predictions by numerous observers would be reversed. For example, many analysts predicted that Shanghai party secretary Li Qiang would not likely be promoted, given Shanghai’s grim Covid-19 outbreak and the outpouring of public frustration. Furthermore, it would break the convention if he rose directly to the premier position without a prior appointment as vice-premier.

Hong Kong’s South China Morning Post (SCMP) on 18 October published an exclusive report that was largely consistent with the WSJ’s report. The SCMP quoted sources as saying that the CCP’s top leadership could see “bigger-than-expected changes” following the 20th Party Congress. Four top positions on the PSC could change hands, including Li Zhanshu, Han Zheng and Li Keqiang, who will “likely opt for full retirement”. It is unclear who the fourth will be.

This is largely consistent with the WSJ’s report, which said that only Xi Jinping, Wang Huning and Zhao Leji will remain on the PSC. The report also listed a few candidates who could be promoted, such as Ding Xuexiang, Li Qiang, Li Xi and Chen Min’er. It also claimed that Hu Chunhua is unlikely to be promoted.

... it also demonstrates that the CCP’s top leader now has firmer control over high-level appointments after achieving “one position as the highest authority”.

Both lists in the WSJ and the SCMP are very different from the convention-based speculations that were made prior to the 20th Party Congress. If their reports are true, it would imply that Xi and his closest aides and former subordinates would dominate the new PSC, while Hu Chunhua, who has Communist Youth League roots, would fall out of luck.

While this shows that traditional rules and logic could be broken in the “new era”, it also demonstrates that the CCP’s top leader now has firmer control over high-level appointments after achieving "one position as the highest authority".

... people believe that the internal operations of the CCP will become more irregular, with less certainty and transparency in the “new era”.

Xinhua News Agency reported that on 18 October, the presidium of the 20th Party Congress has submitted the proposed name lists of the candidates for members and alternate members of the 20th Central Committee for deliberation. Hence, the delegates are already aware of the nominees.

As the 20th Party Congress enters the halfway mark, speculations over the name list will intensify, and information from various sources could either get increasingly confusing or closer to the truth. Industry seniors and peers who have covered numerous party congresses admitted that the 20th Party Congress is one of the most secretive they have seen, with the least amount of information released. It is also one where the outside world is most split over the potential incoming leadership. As a result, people believe that the internal operations of the CCP will become more irregular, with less certainty and transparency in the “new era”.

Will the new leadership be formed in accordance with the convention, or will the rules be broken? We will find out this weekend.

This article was first published in Lianhe Zaobao as “不同版本二十大人事名单疯传”.

Related: What’s new in Xi Jinping's 20th Party Congress report | CCP’s new leadership remains the big question | [Party and the man] Ditching presidential term limit an exception not the rule | How top decisions are made in the CCP's 'meeting-based' governance model | Will the CCP's 20th Party Congress be the dullest in decades?