Lianhe Zaobao correspondent Yang Danxu talked to a Shanghai Didi driver whose family made nearly 20 million RMB (close to S$4 million) from the government's relocation exercises. His old properties measured just 35 square metres in total. What a way to get rich! But what are the problems that lie beneath the surface? 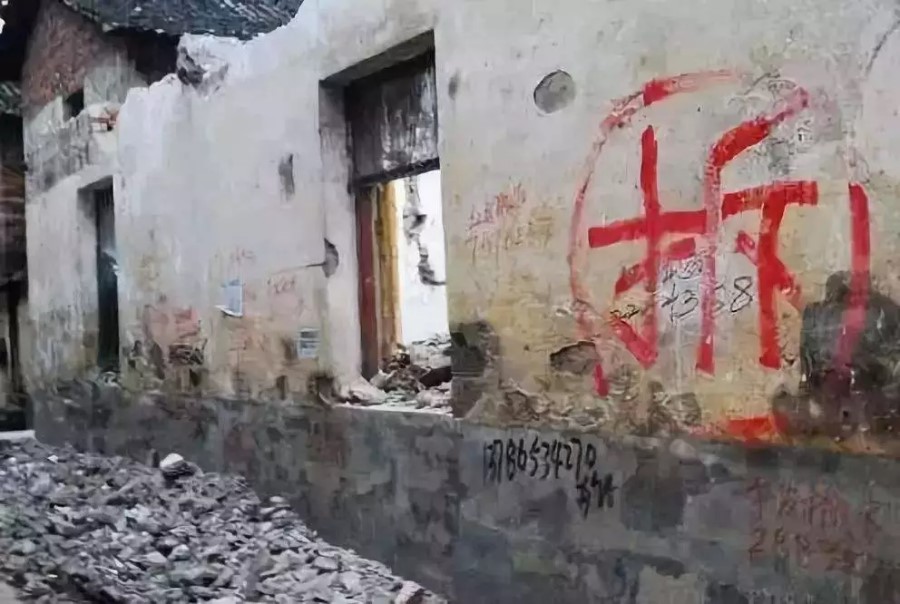 A large 拆 ("demolish") is painted on the wall of a building in China due to be torn down. (Internet)

Candice Chan - 6 December 2022
Commentator Chen Kuohsiang notes that even after the 20th Party Congress and talks between Chinese and US Presidents Xi Jinping and Joe Biden during the G20 summit, the Chinese economy is not facing an easy time, not least because of Covid-19 controls, the US's trade restrictions and China's stringent policy on private enterprises.
Read more
Translated by Candice Chan on 12 December 2019

My driver Zhang, who drives for China’s ride-hailing app Didi, was born in Shanghai in the 1980s. He is especially familiar with the old town area near where I live — eateries for the best xiaolongbao (小笼包), relocation, new buildings — he knows it all. During our chat on the way to the airport, I found out that Zhang grew up in Puxi.

About two months ago, his family was relocated from an old house near Shanghai's City God Temple (Chenghuang Temple, 城隍庙). They got over 4 million RMB (about S$770,000) for an area measuring less than 25 square metres, or about 160,000 RMB per square metre. When Zhang’s father bought that house about 20 years ago, it cost only 10,000 RMB.

Before I could make sense of those shockingly high returns, Zhang claimed that was not the most lucrative relocation he had come across. Before the 2010 World Expo, Shanghai embarked on a large-scale relocation exercise with very generous payouts. His family traded a 10-square-metre “pigeon cage” (鸽子笼) living unit at Duojia Road in Puxi for a 130-square-metre three-room unit and a 106-square-metre two-room unit in the Pujiang Expo housing project.

With the boom in Shanghai’s property prices the past few years, these two units are now worth some 60,000 RMB per square metre. Zhang sighs, “Twenty years ago, my father bought that ‘pigeon cage’ for only 5,000 RMB. Now the two new units are worth 15 million RMB. Who would have thought it!”

I had previously seen several stories in the media about people getting rich due to relocation, but hearing this tale from the horse’s mouth still makes it both real and incredible. However, unlike many of the others who were just lucky, Zhang’s family does not wait to be relocated, but are “professionals” who make relocation their business.

Many people now hope to find a large 拆 (chai, demolish) on their wall, while discussions of relocation have shifted from the tragedy of forcible action to a story of wealth creation.

In the late 1990s, Zhang’s father started buying several old houses in Puxi’s old town area, renting them out to people who came to Shanghai to work. Over the past ten years, four of these old houses were demolished, and now Zhang and his family hold properties worth tens of millions of renminbi in Greater Shanghai, where every inch of land is worth its weight in gold.

A colleague who worked in China many years ago told me that she often came across cases of the authorities engaging in relocation exercises to maintain power. However, while forcible relocations and appeals by relocated residents still occur, the Chinese people's attitudes towards relocation have long changed. Many people now hope to find a large 拆 (chai, demolish) on their wall, while discussions have shifted from the tragedy of forcible action to a blessing of wealth creation.

Two or three months ago, news about the relocation of an urban village or chengzhongcun (城中村) in Shenzhen gained online traction. The local government announced that Baishizhou would be included in a relocation programme, and rumours spread that the exercise would create 1,878 billionaires. The authorities subsequently clarified that this was untrue, but some media estimated that about 20% of nearly 2,000 households in the village had property measuring at least 1,000 square metres — these people would of course become billionaires.

Relocation is a necessary part of urban development. Old towns need renewal, and old houses have to be demolished to optimise land use. As the city expands, villages on the outskirts have to give way to urbanisation, and there is nothing wrong with providing a reasonable recompense for those who are affected, or even giving them a payout higher than market rate as a dividend of urbanisation. However, overly generous payouts have also made relocation a shortcut to quick wealth and upward mobility.

... emotions on the topic are complex, involving a sense of injustice at the unfair and unreasonable payouts, as well as resentment at “why not me”. All this is a reflection of social realities and tensions such as unequal wealth distribution, not enough channels of wealth creation, and difficulty in upward mobility.

Someone described China-style relocation as follows: “The local government gets a large income from land sales, developers seek quick profits from property, speculators earn huge investment profits — what is left for most people is envy, jealousy, and resentment.”

Generally, Chinese society feels negatively about wealth creation through relocation. The “descendants of the relocated” are not popular, and are labelled as having gained something for nothing. News reports on this group involve idling and wasting money.

Of course, emotions on the topic are complex, involving a sense of injustice at the unfair and unreasonable payouts, as well as resentment at “why not me”. All this is a reflection of social realities and tensions such as unequal wealth distribution, not enough channels of wealth creation, and difficulty in upward mobility.

Zhang the experienced “relocated” says frankly that China’s large-scale relocations are changing, and the government and developers are increasingly reluctant to spend a lot of money on these exercises. He and his family still hold one old house, but they do not know when the next relocation exercise will be. The reality is, while this product of China’s rapid urbanisation may fade away, the deeper conflicts and problems behind it are not so easily resolved.