Revival of nuclear competition: How should China respond?

As the US and Russia take a more hawkish stance in developing their nuclear capabilities, China may get caught in the fray in this dangerous arena of nuclear power one-upmanship, says Chinese military affairs commentator Song Zhongping. He fears that the US will break its own rules by carrying out traditional nuclear weapon testing, thereby spurring a domino effect. 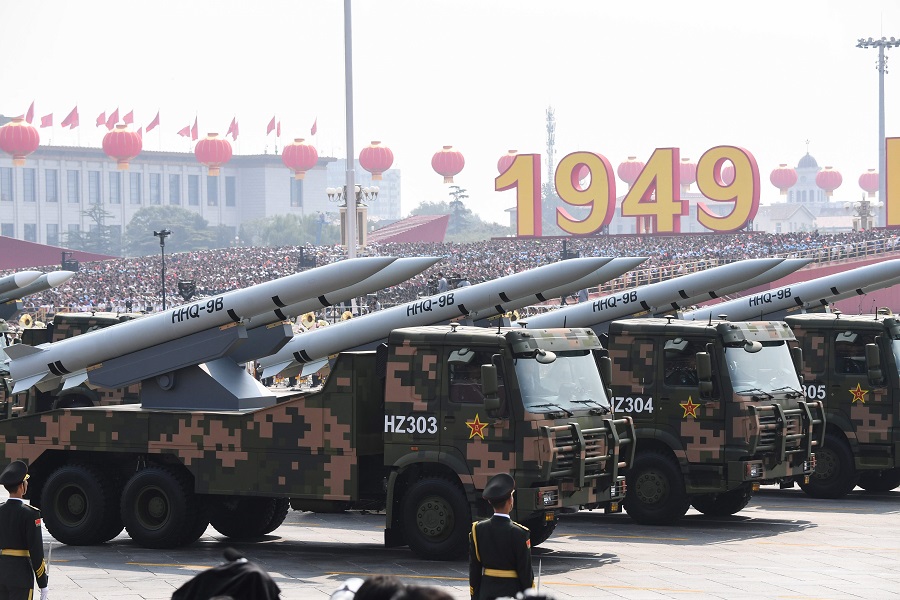 This file photo taken on 1 October 2019 shows military vehicles carrying HHQ-9B surface-to-air missiles participating in a military parade at Tiananmen Square in Beijing to mark the 70th anniversary of the founding of the People's Republic of China. (Greg Baker/AFP)

Grace Chong - 30 January 2023
Amid ongoing tensions, a high-level visit by US Secretary of State Antony Blinken to China in the coming week shows hope for improved relations between the two economic powerhouses. Zaobao correspondent Yu Zeyuan notes that while the meeting may not produce practical results, it is a much needed exchange to manage and control China-US relations from worsening.
Read more
Translated by Grace Chong on 24 June 2020

Recently, China, the US and Russia have started yet another battle of wits regarding nuclear weapons.

The deliberate attempt by the US, despite being fully cognisant of China’s definite rejection, is meant to heap the blame on China for the US terminating the Intermediate-Range Nuclear Forces Treaty (INF Treaty) and not ratifying the extension of the New Strategic Arms Reduction Treaty (New START).

The US believes that it was right in pulling out of the INF Treaty since China, the country with the largest number of medium-range missiles, will not be bound by such an agreement. At the same time, the US wants China at the US-Russian nuclear arms control negotiations in view of China’s considerable strategic weapons arsenal.

In response to this, Russia suggested to include Britain, France and other nuclear weapons states at the negotiations, which was not followed up on by the US. This is because the US’s intention is to contain China, which has nothing to do with other countries.

Once the US violates this default, however, other countries will inevitably follow suit, resulting in the complete abandonment of the Comprehensive Nuclear-Test-Ban Treaty.

The US must not resume nuclear testing

Of course, the US is displeased with the non-obliging China and has publicly accused China of violating the Comprehensive Nuclear-Test-Ban Treaty (CTBT) by having conducted small-yield nuclear tests. The US has lied in this matter and is now threatening to resume its own nuclear tests. It is blaming China for its own political manoeuvre to completely withdraw from the CTBT.

Undeniably, since 44 countries with the capabilities to develop nuclear weapons have not ratified the CTBT, especially China and the US, the treaty is not legally binding even though the major nuclear powers have abided by it by default and have not carried out nuclear weapon test explosions. Once the US violates this default, however, other countries will inevitably follow suit, resulting in the complete abandonment of the CTBT.

Breaking its own rules by carrying out traditional nuclear weapon testing will result in a domino effect. The biggest beneficiaries will be the nuclear threshold states (those that have not but are believed to be able to quickly produce nuclear weapons if they needed to) instead of the US itself. In particular, the proliferation of nuclear weapons will cause the US, seen in Chinese eyes as the global “troublemaker”, to be worried about nuclear retaliation by other countries or terrorist organisations.

While China and Russia may follow in the US’s footsteps to resume nuclear testing, it may also not necessarily be advantageous for them because global nuclear non-proliferation remains beneficial to nuclear-weapon states.

This gives Russia the ability to make the first nuclear strike.

In response to the aggressive US adjustments in nuclear strategy, Russia has calibrated its nuclear deterrence policy accordingly. For the first time, it released its set of “Basic Principles of State Policy of the Russian Federation on Nuclear Deterrence”. The document explicitly states that nuclear weapons may be used in the case of “mass destruction against it and/or its allies, as well as in the event of aggression against the Russian Federation with the use of conventional weapons when the very existence of the state is in jeopardy”.

This gives Russia the ability to make the first nuclear strike. It reserves the right to do so in light of the following considerations. First, the lowering of the nuclear threshold by the US has given Russia an acute sense of crisis. Second, the threat of weapons of mass destruction including biological weapons is immense. Hence, its potential use on Russia will be regarded as a nuclear strike, and will trigger Russia’s nuclear retaliation.

What should China do?

How should China rise to the challenge posed by the US’s furtive adjustments and Russia’s open modifications of their respective nuclear policies?

First, China will not participate in the US-Russia nuclear arms control negotiations because China is ineligible to do so. Chinese foreign ministry spokesperson Hua Chunying has said that “China’s nuclear power is not on the same order of magnitude as that of the US and Russia”.

It is therefore crucial for China to quantitatively and qualitatively upgrade its nuclear capability.

The invitation by the US to the nuclear arms control negotiations is an ill-intentioned offer, with the ulterior objective to use a treaty to completely disarm China of its conventional ballistic missiles. Even if Russia can bring other nuclear-weapon states to the table, China can be an observer without participating in substantive negotiations.

Second, China should moderately increase its nuclear weapons. Currently, China’s nuclear weapons are, quantitatively and qualitatively, evidently incommensurate with its superpower status and its mission in this era. With the intensifying China-US conflict, yielding political dividends by manoeuvring between the US and the Soviet Union (and later, Russia) will no longer be possible for China. It is therefore crucial for China to quantitatively and qualitatively upgrade its nuclear capability.

The lean and moderate Chinese nuclear arsenal is entirely aimed at the US and not at other NATO countries.

Third, China does not need to modify its established nuclear strategy. China should continue its commitment to “a nuclear policy of no first use of nuclear weapons … and not using or threatening to use nuclear weapons against non-nuclear-weapon states …” as detailed in its National Defence white paper, and possess a second-strike capability in a lean and effective nuclear deterrence strategy.

One objective is to make a difference by emphasising active rather than passive nuclear strategies and moderately strengthening its nuclear arsenal. The other objective is to emphasise “lean” in the restrictive clauses to mean “moderate”, and that China will not engage in a nuclear arms race. For example, China will only require 2,000 warheads if the US has 6,000. The lean and moderate Chinese nuclear arsenal is entirely aimed at the US and not at other NATO countries.

In addition, China should consider using nuclear weapons against weapons of mass destruction, such as biochemical weapons. Once it is ascertained that such weapons are used against China, China will opt for nuclear retaliation. At the same time, China urges non-nuclear-weapon states and territories not to import nuclear weapons from third parties; otherwise, they will be regarded as nuclear-weapon states and be subject to China’s nuclear strategy.

In the face of strategic aggression from the US as well as the respective nuclear policy changes by the US and Russia, China must stay its strategic course and not modify its established nuclear strategy. By adhering to possessing a second-strike capability in a lean and effective nuclear deterrence strategy, China will be able to effectively safeguard its national security and deal with strategic blackmail by other nuclear superpowers.

Related: The US will accelerate its own decline by suppressing China | In a world split apart, where do you belong? | Closer military ties in China-Russia power play