A Singaporean in China: Don't take free playgrounds for granted

Former journalist Jessie Tan shares her observations as a mother in China as she looks at the outdoor spaces where Chinese children can play, learn and grow. While the options are plenty, the costs to entertain children cannot be avoided, posing a challenge to lower-income families. 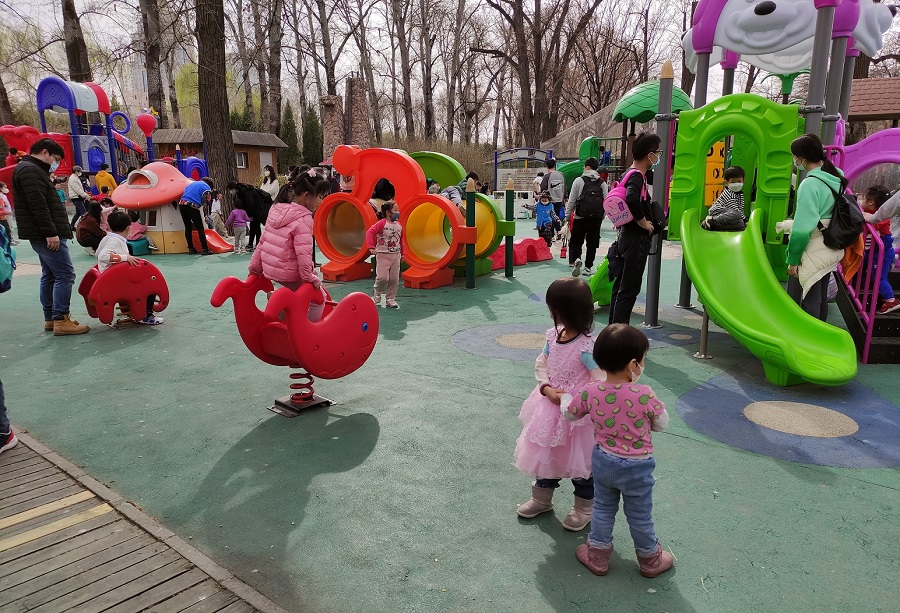 A playground in a zoo with an admission fee of 10 RMB per child.

Grace Chong - 21 June 2022
In pursuit of better working conditions, China's post-00s generation has gained a reputation for being newbies who are difficult to manage and who show their superiors little respect. While those who go to extremes may be in the minority and some admire their brave fight for workplace rights, ultimately, they may be putting their job prospects in jeopardy.
Read more
Translated by Grace Chong on 1 June 2022

Children’s Day is celebrated in China on 1 June every year. As a parent to two young ones, my world has opened up to places that I would never have gone to if it weren’t for them.

When my daughter was six months old, activities on our family trip to Perth, Australia consisted mainly of picnics at the local parks and long walks to put her to sleep in the stroller. During our trip to Japan when she was two years old, we spent three afternoons in the same indoor playground at a shopping mall in Tokyo.

Even during our first year in China, we did not visit the popular tourist attractions such as Tiananmen Square or the Forbidden City. Instead, we explored several parks in Beijing and Tianjin.

The older, bigger and more popular parks in Beijing typically have the same features: a huge lake in the middle surrounded by willow trees, with their long branches gently swaying to the occasional breeze; some Chinese-style pavilions and white stone bridges; a few wild ducks; a large playground; and a number of amusement rides.

During my childhood in Singapore, amusement rides were only found at the roving pasar malams (night markets) and were generally expensive, so they tended to be delightful treats rather than a regular activity. However, in China, a park feels incomplete without roller coasters, carousels, trains and trampolines.

I went on so many rides with my children that I wondered if I was subconsciously trying to make up for my own lost childhood.

These mini theme parks are usually run-down, with dated designs on the roller coaster cars, faded paint, shrivelled and smelly seat belts, and water features coated in dark greenish mould. Some of the decorations remind me of Hell’s Museum in Haw Par Villa, a park in Singapore built in 1937. Regardless, the children do not care about the aesthetics of the park and still have fun on the rides.

Even the adults have fun too. The cost of a ticket to go for the rides in the park could be as cheap as 10 RMB (US$1.50), which is much more affordable than Singapore's Uncle Ringo rides. I went on so many rides with my children that I wondered if I was subconsciously trying to make up for my own lost childhood.

Apart from the amusement rides, a trip to the park sometimes includes steering a boat around the lake. This is a more expensive activity, costing 120 RMB to rent a boat for an hour, so my husband and I would usually discuss with our children in advance if that day’s outing would include a boat ride.

No free play at the park

Surprisingly, the playgrounds in many of the parks in Beijing are not free. Unlike in Singapore where there are countless playgrounds of all sizes nestled within the HDB estates, I had difficulties finding a playground in Beijing that was open to the public at no charge.

With amenities that require money at every corner of the parks in China, isn’t it a painful sight for both the parents and children of lower-income groups when they go outdoors?

The parks charge up to 20 RMB per hour for children to play in the run-of-the-mill playgrounds similar to the ones we see in Singapore. This took some getting used to as I have been spoiled by the easy and free access to public parks and playgrounds in Singapore.

I started to wonder, how do parents from low-income families entertain their children on their day offs and weekends in Beijing?

In This Is What Inequality Looks Like, Singapore sociologist Teo You Yenn wrote about how a single mother avoided walking through shopping malls with her daughter because it would eventually lead to spending money. I imagine that they must have spent a lot of time in the free public spaces such as parks and libraries, although unfortunately for the mother, more and more libraries in Singapore have relocated inside shopping malls now.

Beijing only has a few public libraries, and they may not be as big nor as popular as those in Singapore. There is even a joke among the Chinese people that the Covid-19 contact tracing records have not located anyone who has visited the libraries.

With amenities that require money at every corner of the parks in China, isn’t it a painful sight for both the parents and children of lower-income groups when they go outdoors? They can only look on as others who have the financial means enjoy their rides and playgrounds.

If these parents adopt the same mentality as the single mother in Teo’s book, and would rather avoid places that tempt people to spend money, does it mean that these children’s outings are limited to small parks with a smattering of free amenities such as a senior citizens’ exercise corner?

I later discovered that Beijing has many well-maintained museums that are either free or have cheap entrance fees. My son enjoyed looking at planes and trains up close in the China Aviation and Railway Museums.

The massive science centre was also a hit with my children. However, at the age of three and five, they would still rather play on the slides and swings than look at stationary exhibits.

... China’s market for children’s goods and services is worth almost US$700 billion, according to media reports.

Indeed, there is no shortage of places to play in China if one has the money to spend. With countless businesses targeted at families with young children, including petting zoos and mega indoor playgrounds, China’s market for children’s goods and services is worth almost US$700 billion, according to media reports.

South China Morning Post stated that almost half of the families surveyed in the 2020 Children Economy Insights Report, conducted by analytics firm QuestMobile, said that 30% to 50% of their overall spending was on their children. The report also showed that close to 90% of parents aged between 25 and 40 who had children aged under 12 spent 1,000 RMB to 5,000 RMB on their children each month. Besides daily necessities, they spent mostly on education, entertainment and extracurricular classes.

As a parent, I can attest to this. When you need to keep your children engaged for two full days during the weekends, it is easiest to solve this “problem” with money: send them for enrichment lessons, or bring them to an indoor playground or a park.

Furthermore, it becomes extremely difficult to say no to one’s child when they are adorably begging “please, mummy” for another ride on the caterpillar-shaped roller coaster.

However, I still believe that a society should provide plenty of free community playgrounds. These public spaces offer young children of all backgrounds the opportunity to socialise and learn through play together — from making new friends to taking turns on the see-saws — all while improving their physical health from a good workout of running and climbing.

Coupled with an exercise corner for adults, these spaces can easily become a gathering space and the heart of the local community.

After a year of searching, we finally found a few playgrounds in relatively newer parks that are free. I hope this is the start of a wider trend for parks in Beijing to offer free playgrounds instead of chargeable amusement rides for children.