In December 2020, family and friends of Shanghai Book Co Ltd produced a commemorative book of the now-defunct bookstore. Founded in 1925, Shanghai Book Co Ltd played a pivotal role in shaping the consciousness of Chinese-speaking Singaporeans in the 1950s. It was a meeting point of ideas and voices, not only from greater China, but within Southeast Asia. In fact, it had helped to nurture the budding interest of Chinese-speaking young students in Malay language and culture. Teo Han Wue recounts how this bookshop in North Bridge Road, easily stereotyped as Chinese-centric, became instead an emblem of openness and cultural diversity. 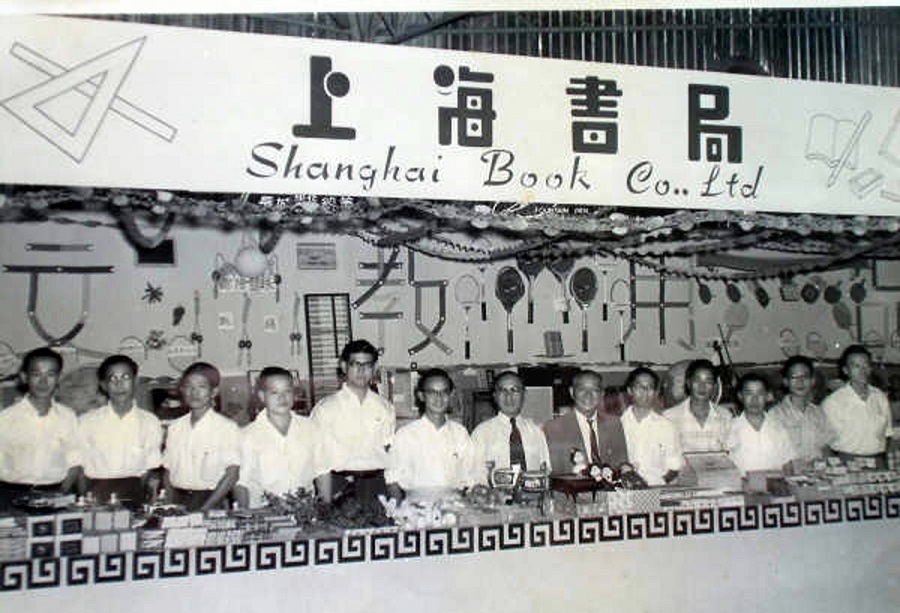 Staff of the Shanghai Book Company at an exhibition in 1965, Singapore. (Photo provided by Zhang Langhui)

Grace Chong - 5 December 2022
Through the eyes of her cat Pudding, Beijinger Lorna Wei gives a snapshot of her daily life when her residential building went under lockdown last week.
Read more
Translated by Grace Chong on 9 February 2021

As an editor in a major English daily in Singapore in the 1980s, I once planned to run a series of stories about trades whose beginnings could be traced back to Shanghai.

To my regret, this never got done somehow. It would have been an interesting record of Singapore of that period that may have since faded or is fast fading from living memory.

The idea came from shop signs and advertisements I often saw claiming connections with Shanghai to distinguish themselves from their competitors. Trades such as bookshops, tailors, musical instruments, hand-crafted furniture often boasted a link to the Chinese city, probably to suggest progressiveness if not style and taste in modern living.

All this may already be quite familiar to many, but few people, especially the young and literate only in English, actually realise what an indelible impact Shanghai has had in shaping the consciousness of Chinese-speaking Singaporeans of their parents’ generation particularly from the mid-1950s.

Like most Chinese intelligentsia arriving from China especially at the outbreak of Sino-Japanese war, leading artists such as Chen Wen Hsi, Cheong Soo Pieng, Chen Chong Swee, Liu Kang and Fan Chang Tien came to work in Singapore after studying in Shanghai. There was also a new generation of Singapore-born ink painters practising under the influence of the Shanghai School, a style favoured by the city’s art connoisseurs in the early 20th century.

All this may already be quite familiar to many, but few people, especially the young and literate only in English, actually realise what an indelible impact Shanghai has had in shaping the consciousness of Chinese-speaking Singaporeans of their parents’ generation particularly from the mid-1950s.

Once I wrote an article “Debunking the Myth of the Chinese-Educated” for the Sunday Times in 2008 recalling the memories of Shanghai Book Co Ltd. which had just closed down after 83 years. A Nanyang Technological University professor told me how she was so struck by it that she pinned it up on the notice board because her students “tended to regard the Chinese educated in Singapore as parochial and conservative”.

In that article, I shared memories from my younger days from the 1950s to the 1970s of the bookshop founded in December 1925 by two young men Chen Yoh Shoo and Wang Shu Yang from Shanghai, which made significant contributions to Singapore’s cultural scene.

In December last year I was surprised to receive a book on the history of the bookshop though it had ceased operations more than a decade ago. The founders’ family represented by Chen’s son Mong Tse produced this commemorative book in Chinese in 2020, which would have been the store’s 95th anniversary, with the help of book trade veteran and collector Yeo Oi Sang. Yeo, who single-handedly produced the book, is one who feels strongly about perpetuating the legacy of bookshops in Singapore and has donated his own collection of books and magazines published by Shanghai Book Company to Singapore’s National Library.

The book leads me to revisit the story of Shanghai Book recalling how its founders had shown foresight when they introduced to Singapore and the region new books with progressive ideas of writers of the May Fourth Movement that began in 1919.

Shuttling between Shanghai and Singapore because of their family business in household utensils in the early 1920s, Chen and Wang noticed how the exciting new books and magazines they had seen in Shanghai, a trading port and hotbed of modern ideas, were completely missing here. They then started Shanghai Book Company as an alternative choice to two existing bookshops — Commercial Press established in 1897 and Chung Hwa in 1912, both reputable China publishers of mainly literary and academic classics.

It was a time when students in the Chinese schools in Singapore and other parts of Southeast Asia were influenced by the new cultural trends taking place in China. In 1919 (the year of the May Fourth Movement which called for intellectual revolution and socio-political reform to rebuild society and culture), Chinese High School, Singapore’s first Chinese secondary school for students from the region was founded.

As the young were hungry for new literature from China, the bookshop's business developed rapidly and it soon opened branches in Kuala Lumpur (1926), Surabaya (1928), and Jakarta (1935). Its Jakarta branch later grew to become much bigger and more well stocked than any other Chinese bookstore in the region until Suharto came to power and banned all Chinese books in 1965.

A gathering spot for ideas and lively discussion

Students as well as working adults literate in Chinese from the 1950s through the 1970s, particularly those who graduated from the Nanyang University (founded in 1955), would remember Shanghai Book as one of their favourite weekend haunts. It was the heyday of Chinese bookshops when Shanghai Book was situated in North Bridge Road where there was a cluster of smaller bookshops in the vicinity.

Apart from the works of authors like Lu Xun, Ba Jin and Guo Moruo, one could find Chinese translations of the works of Shakespeare (complete plays), Goethe, Tolstoy, Pushkin, Balzac, Cervantes, Whitman, Twain, Tagore and so on.

The vertical shop sign “Shanghai Shuju” (上海書局), designed with characters in the art deco style fashionable in Shanghai in the 1920s and 1930s, stood beneath the image of an open book at the base of a tall coconut tree. It expressed the aspiration to nurture the intellectual growth of the community in the Nanyang (Southeast Asia).

From 1957, in response to the growing importance of Malay as the national language of Malaya, the bookshop also published many books, dictionaries and magazines on the Malay language, literature and culture.

Publishing with a Southeast Asian readership in mind

Shanghai Book’s role expanded when it started its publishing business after World War II because supplies of books from China for the Chinese schools had been disrupted. Besides, with emerging nationalism in the region, the Chinese community began to identify more with their adopted homeland by turning to books and textbooks more relevant to local conditions.

It was during this time that Shanghai Book Company played an even more important role in the educational and cultural development in Southeast Asia. With its main publishing function based in Hong Kong, the textbooks it produced were distributed to Malaya, Thailand, Vietnam, the Philippines, Laos and Cambodia.

From 1957, in response to the growing importance of Malay as the national language of Malaya, the bookshop also published many books, dictionaries and magazines on the Malay language, literature and culture. For instance, Malay language expert Lim Huan Boon wrote Singapore's first Malay-Chinese dictionary and had it published by the bookshop in 1958. He also helped edit some of its Malay books.

Those books were a great help when I myself was learning Malay as a student in a Chinese school in the late 1950s and early 1960s. I remember reading about modern Malay writers such as Masuri S.N. and Usman Awang in a magazine published by the Shanghai Book Company.

In 1963 the bookshop under Chen Mong Tse, who was himself a Nanyang University science graduate, also published a series of science textbooks in English at a time when such materials imported from Australia and England were found to be unsuitable for schools in the tropics. Remarkably, he himself undertook the formidable task of writing the texts which were then polished up by an English editor. They were so well-received especially in Malaysia that their rights were sought by Tamil and Malay publishers. Some of these textbooks even found their way to schools in Africa in the late 1960s.

Efforts such as these demonstrated a distinct local and regional consciousness as well as an appreciation for the multicultural reality of Singapore and Malaya on the part of the bookshop. They also reflected the Chinese-educated's enthusiasm for learning about a language and culture other than their own. That explains why most of the non-Malay Malay scholars in Singapore are Chinese-educated.

The story of Shanghai Book represents a substantial slice of the history of education in Singapore, Malaysia and the region and eloquently debunks the popular myth that the Chinese educated are inclined to be conservative, less open and less cosmopolitan, or worse, chauvinistic.

After Singapore separated from Malaysia in 1965, publication on Malay language declined. Besides, the bookshop’s publishing operation ceased due to changes in education policies and the phasing out of Chinese schools during the 1970s and the 1980s, not to mention the closure of Nanyang University, which was the region’s first Chinese-language tertiary institution, in 1980.

The story of Shanghai Book represents a substantial slice of the history of education in Singapore, Malaysia and the region and eloquently debunks the popular myth that the Chinese educated are inclined to be conservative, less open and less cosmopolitan, or worse, chauvinistic.

When the final curtain fell, Shanghai Book had fulfilled its mission in history. Though it is gone, its remarkable legacy and many fond memories should be dearly cherished and properly documented.

This article is an updated version of an article first published in The Straits Times in 2008.

Related: Singapore history: A tale of separating and connecting (Video and text) | A 120-year-old Singapore monastery is getting a makeover from mainland China and Taiwan experts | Wang Gungwu: When “home” and “country” are not the same | An album of rare photos: From Chinese coolies to Singaporeans | Tan Kah Kee: The Confucian merchant's relevance in contemporary societies