This year marks the 30th anniversary of the establishment of bilateral relations between China and Singapore. In a recent interview with Lianhe Zaobao, Singapore’s Ambassador to China Lui Tuck Yew takes stock of the relationship, speaks of the challenges and opportunities brought about by Covid-19, and looks ahead to greater heights that the two countries can scale together through greater collaboration and cooperation. 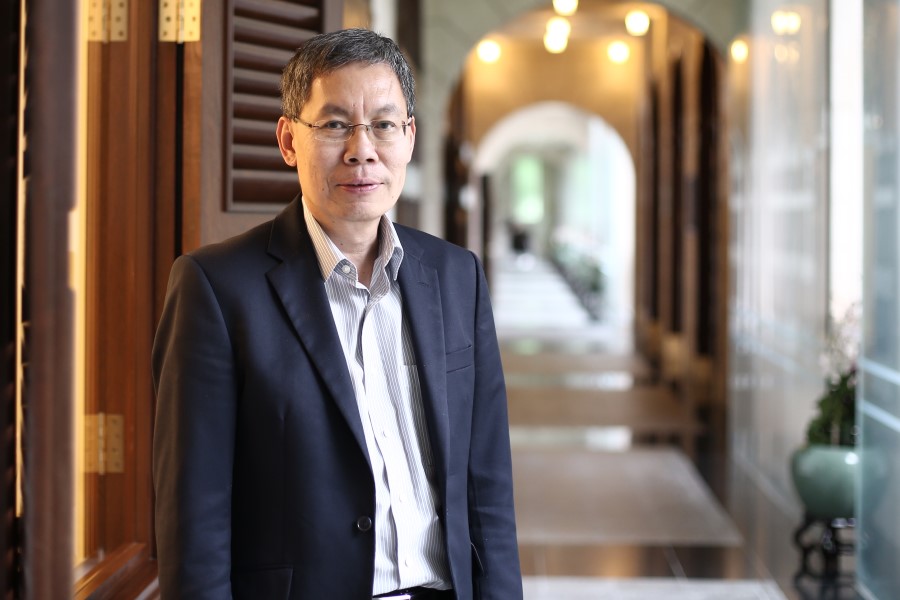 Candice Chan - 29 June 2022
Over the past couple of years, there has been an influx of migrants from Hong Kong to the UK. Communities have been forming in various cities, such as London and Manchester. And as Hong Kongers find jobs and settle in, the British way of life rubs off on them. But underneath all that, they remain Hong Kongers at heart.
Read more
Translated by Candice Chan on 22 July 2020

From the end of January to early February this year, China was badly affected by the Covid-19 pandemic. Working in close coordination with government departments in China, Singapore’s Foreign Service officers facilitated the return of 270 Singaporeans stranded in Hubei through two evacuation flights. The planes heading to Wuhan from Singapore were loaded with medical supplies and diagnostic test kits for the people of Wuhan, who were in urgent need of medical supplies then.

Last month, essential business and official travel between China and Singapore resumed amid the pandemic when China became the first country to establish a “fast lane” with Singapore.

Singapore and China are jointly dealing with the coronavirus outbreak by keeping supply chains open and spurring economic recovery.

In a recent interview with Lianhe Zaobao, Singapore’s ambassador to China Lui Tuck Yew, said: “It reflects the understanding that has been built up [between the two countries] over the years, a level of comfort in terms of being able to work together and recognising both the interests as well as the constraints of the other party and finding what is a mutually acceptable way to effect something that would be beneficial to both sides.”

Lui assumed his role as Singapore’s fourth Ambassador to China last October. The Covid-19 pandemic marked an extraordinary start to his tour of duty.

Lui said whether it was arranging for stranded Singaporeans to be evacuated quickly, or establishing a fast lane with China while other countries were in lockdown, Singapore and China’s 30 years of diplomatic relations had a large part to play.

This was also the result of Singapore officials’ ability to communicate with Chinese officials in fluent Mandarin, and the assistance Singapore had provided China when the latter was in need. Besides, both sides were also able to understand the constraints faced by the other party and come up with a solution together.

Singapore-China fast lane has become a reference model for Singapore to adopt in resuming people-to-people exchanges between ASEAN, Northeast Asia, Oceania, Europe and other countries.

On the swift establishment of the fast lane, Lui added that there was “no point just banging the table” demanding something without seeking to understand the other’s constraints. Instead, the Singapore officials explored options that could meet the Chinese authorities’ regulations.

The fast lane has enabled essential travel between Singapore and the six Chinese provinces and municipalities of Shanghai, Tianjin, Chongqing, Jiangsu, Zhejiang, and Guangdong to resume. On the day of the interview, Lui had just attended a video conference to discuss improvements that could be made to the fast lane. The attendees included Enterprise Singapore and Singapore Chamber of Commerce and Industry in China.

He believes that the Singapore-China fast lane has become a reference model for Singapore to adopt in resuming people-to-people exchanges between ASEAN, Northeast Asia, Oceania, Europe and other countries.

Exchanges between high-level leaders of both countries frequent

Singapore must continue to stay relevant to China as the latter continues its process of transformation and reform.

During his time as a cabinet minister, he was co-chairperson of the Singapore-Guangdong Collaboration Council between 2009 and 2015 and helped to enhance cooperation between Singapore and Guangdong on multiple fronts including the advancement of the China-Singapore Guangzhou Knowledge City. He is indeed no stranger to China affairs.

Lui describes the Singapore-China relationship at its 30-year milestone as one that is strong, multifaceted, and underpinned by regular exchanges at the highest levels.

He said that as Singapore and China commemorate the past 30 years of diplomatic relations, it is important to recognise that the past is a springboard to achieving more together, and Singapore must continue to stay relevant to China as the latter continues its process of transformation and reform.

Although the Covid-19 pandemic has posed challenges in terms of bilateral visits and face-to-face communication, high-level leaders of both countries have kept in close contact over the past six months.

Work on Singapore-China collaborations, such as the China-Singapore (Chongqing) Demonstration Initiative on Strategic Connectivity, have also continued via video conferences, while eight memoranda of understanding on the Singapore-China (Shenzhen) Smart City between both sides have been signed...

On 14 July, Chinese President Xi Jinping telephoned Singapore Prime Minister Lee Hsien Loong and congratulated him on the results of the recent Singapore General Election. Both leaders reaffirmed bilateral ties and exchanged views on ways to facilitate economic recovery amid the pandemic.

Work on Singapore-China collaborations, such as the China-Singapore (Chongqing) Demonstration Initiative on Strategic Connectivity, have also continued via video conferences, while eight memoranda of understanding on the Singapore-China (Shenzhen) Smart City between both sides have been signed, marking an important step forward in driving the “common engine” for regional digital economic development.

As to future cooperation between Singapore and China, Lui said that Singapore and China have cooperated in many areas, including the three government-level projects (i.e. the China-Singapore Suzhou Industrial Park, the Sino-Singapore Tianjin Eco-City, and the China-Singapore (Chongqing) Demonstration Initiative on Strategic Connectivity). Both sides should continue to advance these projects so that they bear more fruit. Singapore will also continue keeping an eye on China’s latest developments and explore new areas of cooperation. One of these projects is the Hainan free trade port.

Last month, China announced a masterplan for the Hainan free trade port, to make it a high-calibre free trade port with international influence by the middle of this century. Several policies have been implemented to this end.

Lui pointed out that the central government is giving a lot of attention to the Hainan free trade port, and China has been in touch with Singapore to explain plans for Hainan, while Singapore has encouraged China to visit when conditions permit to see which areas of cooperation are of interest.

“This is very much in a genesis stage that both sides will need a much better understanding of what the possibilities are, but based on recent announcements that China is putting great effort to develop Hainan, that is something that we should pay attention to,” he said.

Lui encouraged Singapore businesses and students to keep an open mind and learn more about China’s development by taking up internships in Chinese companies to explore business opportunities and bring back valuable lessons that will provide useful input for Singapore’s next stage of development.

With the pandemic leading to major changes in the international political and economic situation over the past six months, will this affect how Singapore handles its relationship with China?

A Singapore-aided project to build primary school hostels in Pengshui, a poor region in Chongqing, is in full swing and is expected to be completed this year. Singapore has also put together scholarships for some 150 poor students there.

With this year being the 30th anniversary of diplomatic relations between Singapore and China, the schedule is full of diplomatic events, and exchanges between people and cultures. Singapore President Halimah Yacob has been invited by Chinese President Xi Jinping to make a state visit to China, while Singapore will hold the Joint Council for Bilateral Cooperation (JCBC) meeting in the second half of this year.

A Singapore-aided project to build primary school hostels in Pengshui, a poor region in Chongqing, is in full swing and is expected to be completed this year. Singapore has also put together scholarships for some 150 poor students there.

A collection of artefacts from the Tang Shipwreck collection from Singapore’s Asian Civilisations Museum (ACM) is due to be exhibited in Shanghai by the end of this year, while the ACM will hold an exhibition on the Ming dynasty emperor Yongle, featuring items loaned from Beijing’s Palace Museum.

Lui said these activities are meaningful, as building the primary school hostels in Pengshui is an avenue for Singapore to contribute towards poverty alleviation in China, while the Tang Shipwreck artefacts are part of the ancient Silk Road, and Singapore is now deeply involved in the Belt and Road Initiative (BRI) today.

“Listening to the Chinese people and how they can be waxing so eloquently and you think, that's a wonderfully beautiful way of expressing yourself.”

Apart from furthering Singapore-China relations, Lui also hopes to fulfil a personal wish during his posting in China: to master the Chinese language.

Despite Singapore’s bilingual education system, Lui was mostly educated in English; he graduated from Anglo-Chinese School and Anglo-Chinese Junior College which are known as “traditional English-education schools”. Lui only started learning Chinese in earnest after joining politics in 2006. This reporter’s interview with him was conducted entirely in English, but Lui said: “Listening to the Chinese people and how they can be waxing so eloquently and you think, that's a wonderfully beautiful way of expressing yourself.”

He said his experience with the Chinese language is a lot less than with the English language, but he feels that Chinese is “a beautiful and poetic language”. Besides learning the language, Lui also hopes to find out more about Chinese culture and history, to better understand the nuances of Chinese expressions.