Tsai Ing-wen has continually clarified her fundamental position on the Taiwan Strait issue during her national day speeches since she became Taiwan’s president, much to China’s chagrin. However, this year, some have viewed her speech as “great domestic propaganda” directed against the opposition party instead. Veteran journalist Gu Erde takes us through the highlights of Tsai’s speech and what it means for Taiwan. 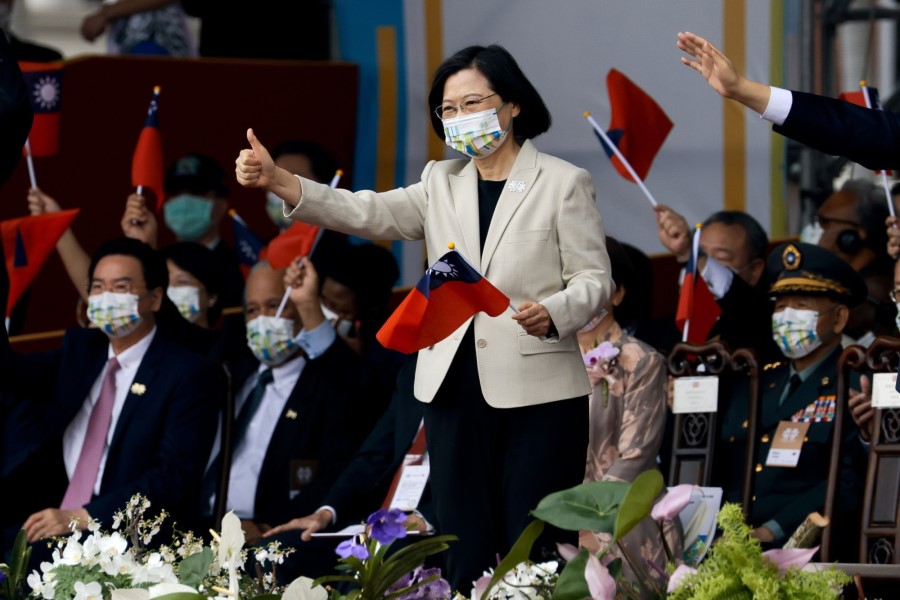 Candice Chan - 30 January 2023
A mall in Shenzhen came under fire for putting up white lanterns with black text as part of its Chinese New Year decorations, while an “ugly” rabbit-shaped light decoration was removed from another mall in Chongqing. Academic Zhang Tiankan muses on tradition and innovation, and the evolution of traditional decorations.
Read more
Translated by Candice Chan on 18 October 2022

In early August this year, US House Speaker Nancy Pelosi's visit to Taiwan sparked large-scale military exercises by the People’s Liberation Army of China, sparking the "fourth Taiwan Strait crisis". Many expected Taiwan President Tsai Ing-wen to propose new ways of easing cross-strait tensions in her National Day speech on 10 October. What solutions did she suggest and will they be effective?

In her speech, Tsai made clear to Beijing that “armed confrontation is absolutely not an option for our two sides”. She stressed that “only by respecting the commitment of the Taiwanese people to our sovereignty, democracy, and freedom, can there be a foundation for resuming constructive interaction across the Taiwan Strait”.

She said, "Provided there is rationality, equality and mutual respect, we are willing to work with the Beijing authorities to find a mutually agreeable arrangement for upholding peace and stability in the Taiwan Strait."

A few days before the speech, Taiwan's Mainland Affairs Council Minister Chiu Tai-san, the administration's point man on cross-strait policies, responded to questions in the Taiwan National Assembly, saying that the Spring Festival next year might be an opportunity to resume the Mini Three Links (小三通) between Taiwan’s Kinmen and Matsu and China’s Fujian. Tsai’s and Chiu’s statements suggest that the Taiwan government expects China’s domestic politics to be more stable and certain after the conclusion of the 20th Party Congress currently in session. Both sides may then have an opportunity to lift the restrictions on people-to-people exchanges, which could also be an opportunity to ease cross-strait tensions.

However, Beijing did not immediately consent to Taiwan’s suggestions. After Tsai’s speech, the Taiwan Affairs Office of the State Council in China responded by framing it as her continued insistence on “Two Chinas” and strengthening Taiwan’s “pursuit of independence through military means”. It repeated its common refrain over the past six to seven years that the 1992 Consensus is a precondition for cross-strait dialogue.

This outcome is unsurprising as this is the Taiwan Affairs Office’s most intuitive response. After all, Beijing leader Xi Jinping has emphasised “One China, 1992 Consensus” as the basis for cross-strait relations.

Since Tsai took office in 2016, Beijing has refused to engage the Tsai administration on the grounds of her being unwilling to clearly express her acceptance of the 1992 Consensus. In the past few years, China has preferred to bypass the Taiwanese government to directly engage with non-governmental organisations or local governments, and has even announced Taiwan-related policies without consulting the Taiwanese government. In China’s bureaucratese, this implies that cross-strait relations is solely “China’s call”.

Chiu's and Tsai's suggestions are not empty talk. Taiwan can take the initiative to resume the Mini Three Links, which have been halted for nearly three years due to the pandemic. Meanwhile, cross-strait exchanges will mainly depend on whether China permits mainland tourists and students to visit Taiwan. These do not require cross-strait discussions and negotiations but will help to ease cross-strait relations.

The pro-unification Pan-Blue individuals have criticised Tsai’s speech as “great domestic propaganda”, for which the audience is not mainland China. In fact, Tsai does not hold out much anticipation on resuming cross-strait negotiations. In her past seven Taiwan National Day speeches, she has reiterated the fundamental position that she will not alter the status quo, which means that she will not declare Taiwan’s independence and will uphold the sovereignty and the existing political system of the Republic of China (ROC, or Taiwan). Similarly, she will not relent nor accept the 1992 Consensus that refers to "one China".

In her inaugural Taiwan National Day speech in 2016, Tsai said that “maintaining the status quo is the pledge I made to voters”. The following year, she said, “Our goodwill will not change, our commitments will not change, we will not revert to the old path of confrontation, and we will not bow to pressure. This has been my consistent position on cross-strait relations.”

In 2018, as the China-US trade war escalated, China intensified its pressure on as well as military deterrence towards Taiwan. Tsai said that “the more dramatically things change, the more Taiwan has to maintain stability” and that “over the past two years, I have consistently insisted on: protecting the free and democratic way of life of our 23 million people; defending the sustainable development of the ROC; and maintaining cross-strait peace and regional stability. These are the greatest common denominators among all the people of Taiwan."

When Xi suggested the “one country, two systems” model for Taiwan in 2019, Tsai responded in her Taiwan National Day speech that “the ROC has stood tall on Taiwan for over 70 years. But if we were to accept ‘one country, two systems’, there would no longer be room for the ROC’s existence. As President, standing up to protect national sovereignty is not a provocation — it is my fundamental responsibility.”

When Covid-19 broke out the following year and the US actively implemented its Indo-Pacific strategy, Tsai once again emphasised that she “will not act rashly, and will uphold our principles”. She added that if Beijing can heed Taiwan’s voice to facilitate cross-strait reconciliation and peaceful dialogue, she believes that “regional tension can surely be resolved”.

The criticisms that Tsai’s speeches are domestic propaganda are unfair. A leader is meant to rally the people through her words and deeds. Tsai has emphasised the endorsement of values, especially those of the democratic system.

In her speech last year, Tsai put forward Taiwan’s four commitments to “a free and democratic constitutional system, … [that] the ROC and the People’s Republic of China (PRC) should not be subordinate to each other, … resist annexation or encroachment upon our sovereignty, and… [that] the future of the ROC must be decided in accordance with the will of the Taiwanese people.”

This year, she has articulated “resilience of four key areas”, which are the economy and industry, social safety net, free and democratic government system, and national defence.

These seven speeches mention phrases such as “economic development”, “safety of the society”, “free and democratic government system” and “national defence and security”. Likewise, the word “resilience” has appeared frequently. For example, in 2020, she described Taiwan as an “Island of Resilience” during the pandemic, while her 2019 speech was entitled “Nation of Resilience, Forward into the World”.

The criticisms that Tsai’s speeches are domestic propaganda are unfair. A leader is meant to rally the people through her words and deeds. Tsai has emphasised the endorsement of values, especially those of the democratic system.

In this year’s speech, she said that “today’s Taiwan is democratic, free, prosperous, and culturally diverse. Not only has Taiwan become a focus of global attention, but our people have come together with a shared determination to safeguard our homeland. Today, saying ‘I am Taiwanese’ is a statement of honour and an expression of pride.” This is very persuasive to the Taiwanese people.

What grates on the Taiwanese opposition or the pro-establishment individuals in this year’s speech is when she mentions that China is trying to divide the Taiwanese society and warns that Beijing, on account of Taiwan’s democratic system, “must not mistake that there is room for compromise in the Taiwanese people’s commitment to democracy and freedom, and thus attempt to divide Taiwanese society by exploiting the fierce competition between our political parties”.

In view of Beijing’s methods against Taiwan for reunification, Tsai has stated the facts. However, the Taiwanese opposition parties will feel that Tsai is accusing them of being supportive of the CPC. The articulation in this part of the speech is indeed remiss.

Another public criticism of Tsai’s speech is that she mentions that Taiwan is most often subject to information warfare, which constantly interferes with its democracy. She said that “going forward, we will continue to strengthen fact-checking mechanisms targeting disinformation”, which invites some concerns whether the Tsai administration would increase its regulation of public opinion.

The most significant highlight is probably that Taiwan has been consistent for seven years in its steady and prudent approach that adheres to its bottom line, without making cross-strait provocations.

There were similar concerns of restriction to freedom of expression not long ago when Taiwan’s National Communications Commission, which is responsible for regulating telecommunications and broadcasting services, drafted the Digital Intermediary Services Act (DISA) to regulate the information and communications intermediary platforms. The Tsai administration eventually halted the DISA bill.

Overall, there are very few highlights in Tsai’s speech in 2022. Tsai has chosen to steadily respond in the face of the threat of China’s military not seen in decades, and the references to China are less than those in the 2018 and 2019 speeches. The most significant highlight is probably that Taiwan has been consistent for seven years in its steady and prudent approach that adheres to its bottom line, without making cross-strait provocations. Indeed, this remains intricate and challenging.

Related: Five big questions about Nancy Pelosi’s Taiwan visit | Who dictates war and peace in the Taiwan Strait? | Taiwan: A runway for great powers to flex their muscles? | Will the US abandon Taiwan?