Chinese researcher Peng Nian, from the National Institute for South China Sea Studies in China, considers whether China is really eager to revive a master-subordinate relationship with its former tributary states. 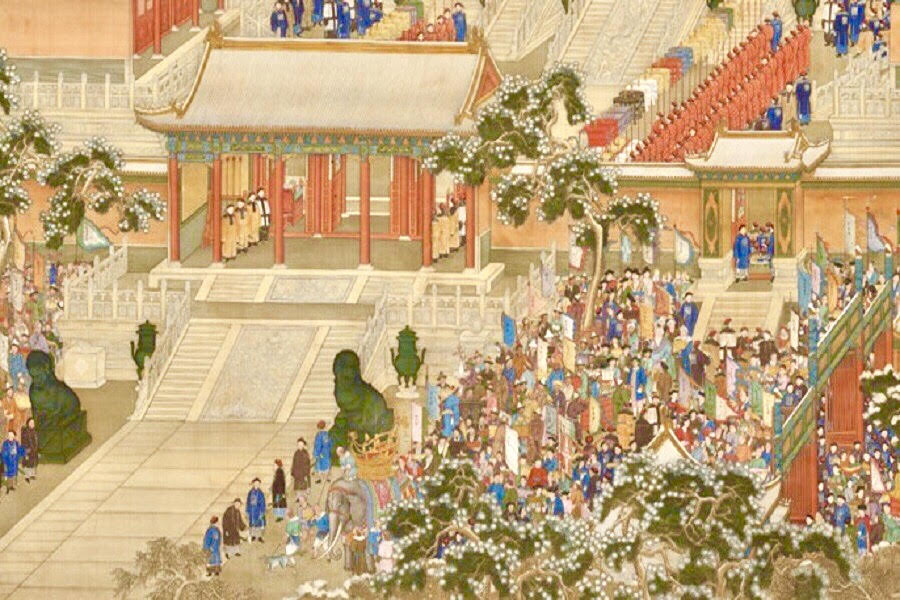 Grace Chong - 22 November 2021
Temporary orders to halt the KAWS public art installation exhibition led Singapore Chinese Cultural Centre CEO Low Sze Wee to ponder the copyright issues of Chinese ink paintings. He notes that many of Singapore’s first-generation artists like Chen Wen Hsi and Fan Chang Tien were educated in Shanghai in the 1920s and were deeply influenced by the Shanghai School. Copying was a common mode of learning, and students like Henri Chen Kezhan and Chua Ek Kay did their best to copy the works of their teachers. While they eventually developed their own styles over time, Low says it could be argued that their achievements were made possible by their formative years spent on copying.
Read more
Translated by Grace Chong on 21 January 2020

For a long time, the term “tributary system” has been frequently used to explicate the relationship between feudal dynastic China and its surrounding “vassal states” (especially the Southeast Asian nations). With the increasingly prominent rise of China, outsiders worry that this Asian colossus will revive such a system in the region. David Shambaugh, a renowned American expert on China issues, has for one recently claimed at the ISEAS–Yusof Ishak Institute that Southeast Asian countries must more actively make their voices heard by Washington, or else America’s neglect might continue because of their silence, resulting in China’s eventual establishment of a 21st-century tributary system in the region.

Looking at the internal affairs and foreign relations of China today through the eyes of bygone history is a rut that Western scholars are accustomed to. None of this is surprising. However, such ossified way of thinking that turns its back on facts and how things have changed can very easily lead to undesirable consequences like confused perceptions and the disruption of regional peace and stability. Quite simply, China does not wish to rebuild a so-called tributary system in Southeast Asia in the 21st century, nor can it possibly do so.

China has no wish to reinstate tributary system

A tributary system would suggest a hierarchy, contrary to the international system of equality-based mutual benefit as advocated by China. In the pre-modern tributary system, China was at the centre of it all. It received the kowtows of nations around it and enjoyed the right to interfere in their domestic affairs. These nations were considered barbarian states at the fringes, who belonged down at the lower end of the system. They had to proclaim themselves subjects of the Middle Kingdom and pay tributes thereto as they sought to receive China’s protection and gracious bestowals.

Structured according to rites and protocols that would underscore the difference in status, a feudalistic hierarchical system like this would be at odds with modern international relations. For one thing, the prevailing notion of national sovereignty guarantees that any form of extraneous meddling and colonial rule would draw strong opposition from the international community. In Southeast Asia, where the scourge of colonialism had been felt profoundly, the desire to oppose interference from external parties is especially intense. Any attempt to assimilate this region into a hierarchical system dominated by one major power or another would be perilous.

It is also noteworthy that mid- and small-sized countries generally seek to be treated with equality in the international arena. It is a basic demand. Certainly, it has been said that “weak countries have no diplomacy”. Although the weaker nations of the world are indeed forced by this reality to endure “oppression” in the practice of international relations, mid- and small-sized countries are generally pushing harder and harder for a new international order that is fair and just. No country is willing to lodge itself in the bottom of a hierarchy and suffer being trampled upon.

Seeing each other as equals

For these reasons, China had set forth five principles for peaceful coexistence in the 1950s, advocating the building of normal international relations based on mutual benefit (as equals) and coexistence in peace. Relations between China and the Southeast Asian countries have been developing in complete adherence to these core principles. There is absolutely no desire on China’s part to go against the common ethical sense of the international community and establish a new hierarchical system to control Southeast Asia.

A tributary system would be a system of unidirectional dependence, contrary to the system of China-Southeast Asian interdependence. Within the ancient system, the surrounding nations were heavily dependent on China, whereas dependence in the opposite direction was extremely low. The maintenance of this system of unidirectional dependence hinged upon whether or not China could continue to satisfy the needs of the surrounding nations. When China became weak and could no longer respond to those needs (especially the needs for security and protection) effectively, the tributary system would be greatly weakened, even to the point of collapse.

In the China-Southeast Asian relations we see now, both sides are highly interdependent. One aspect of that is the high level of economic interdependence. Presently China is ASEAN’s top trading partner, even as ASEAN has overtaken the US to become China’s number two trading partner. China is also the most important source of foreign capital for the Southeast Asian countries, just as ASEAN’s investments in China are on the rise. Compared to the weak economic dependence in the tributary system of old, the China of today is obviously much more dependent — economically speaking — on the Southeast Asian countries.

On the matter of dependence, the second fact we must note is that the Southeast Asian countries’ security demands for Chinese support are limited. As ancient tributaries, they had hoped to acquire Chinese protection through visits paying respect to the Chinese court. In this day and age, however, they are definitely more inclined towards looking to the US for security and protection. Admittedly, as pointed out by some analysts, China-Southeast Asian defence collaboration has been advancing quickly in recent years. Nevertheless, such efforts of security cooperation are meant to enhance mutual military trust, which is a vastly different objective from finding a place under China’s aegis.

China has neither the intention nor the capacity to re-establish such a system in Southeast Asia.

Moreover, a tributary system would be a unipolar system, contrary to the state of China-US binary rivalry in Southeast Asia. In the tributary system of long ago, China was the sole superpower in the region, capable of building an exclusive regional system. However, as China’s national strength dwindled and the Western colonial powers grew more powerful, the network gradually fell apart. In today’s Southeast Asia, American superiority — especially in the domain of military security — is undeniable, even as the US is paying less attention to this region. Moreover, the US is engaging with China as a rival or even antagonist here as well as, indeed, in the broader global arena. Under such circumstances, it is impossible for China to rebuild an exclusive tributary system.

In summary, it is unfair to explain the development of China-Southeast Asian relations in terms of a tributary system. China has neither the intention nor the capacity to re-establish such a system in Southeast Asia. Moving forward, the development of relations between this region and its northern partner will continue to adhere to the basic principle of mutual benefit (as equals) and peaceful coexistence over the long term. While Chinese influence here will inevitably expand in the process, interdependence between both sides will also keep deepening, leading to a more tightly knit community of common destiny rather than a 21st-century reprise of the tributary system.

Related reading: ASEAN’s future: China or the US? | How to swim in the choppy waters of the US-China conflict | The Philippines' termination of the Visiting Forces Agreement: A win for China and Russia