The US hit all the right notes when it hosted ASEAN leaders in Washington last week. The fact remains, however, that Washington has an uphill climb if it wants to catch up with Beijing’s economic momentum in Southeast Asia. Not only that, Southeast Asian countries understand that in the end, it would be every man for himself. 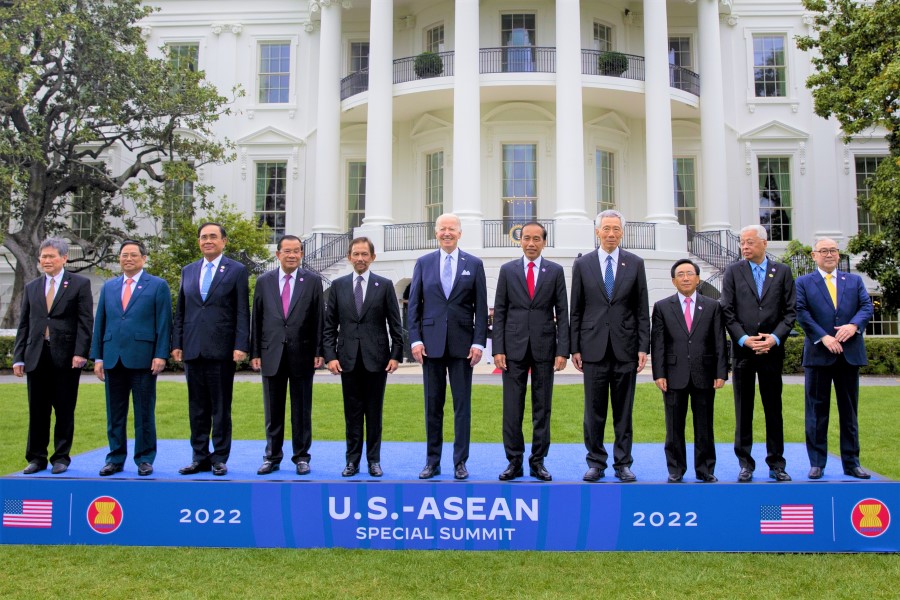 US President Joe Biden (centre) with leaders of the Association of Southeast Asian Nations (ASEAN) countries on the South Lawn of the White House in Washington, DC, US, on 12 May 2022. (Michael Reynolds/Bloomberg)

Candice Chan - 29 June 2022
Hong Kong’s incoming Chief Executive John Lee has nominated the next batch of senior officials, who have been duly appointed by China’s State Council. Many “new Hong Kongers” are gradually making their way into politics through various channels, facilitated by the central government in Beijing, who are not satisfied with the pro-establishment camp in Hong Kong. But can these new Hong Kongers show that they have the interests of all Hong Kongers at heart?
Read more
Translated by Candice Chan on 17 May 2022

Hell hath no fury like an ASEAN neglected. For years, the grouping has accused Washington of strategic neglect, but the postponed US-ASEAN summit initially scheduled for March eventually took place last week with eight ASEAN leaders meeting President Joseph Biden in Washington DC in only the second of such special summits. The first took place in Sunnylands, California in 2016, during President Barack Obama’s second term.

To Washington’s credit, the meeting hit all the right notes, underscoring the US’s commitment to the region at a time of geopolitical flux and competition from China. The announcement of a US$150 million package is welcome and will complement the US$102 million announced at last year’s ASEAN-US Summit.

The package promises to expand cooperation in areas such as maritime security, digital trade and economy, environmental protection, clean energy infrastructure and decarbonisation. All these areas are American priorities and of interest to ASEAN.

But still, the committed sum is chump change compared to China’s pledge of US$1.5 billion last year. While both commitments are unilateral pledges, which may not be implemented eventually, the symbolic disparity in the Chinese and American figures speaks volumes.

The lion’s share of US$60 million is dedicated to maritime security cooperation led by the US Coast Guard (USCG) and will support the maritime component of the ASEAN Outlook on the Indo-Pacific (AOIP). The USCG supporting the AOIP is what ASEAN and its external partners, including China, cannot object to since this underscores ASEAN centrality.

Using the USCG as the lead agency for training and capacity building is also less threatening than involving the US Navy in activities potentially impinging on the disputed South China Sea. This cooperation also helps ASEAN to position itself against China’s controversial Coast Guard Law that allows Chinese coast guards to fire on foreign vessels.

The US$60 million builds on the US$425 million that Washington had committed to the Regional Maritime Security Initiative for FY2016-2020.

Washington still has an uphill climb. To begin with, the US’s much-vaunted Indo-Pacific Economic Framework for Prosperity (IPEF) is still skimpy on the details.

So is this really a "new era" in the relationship as President Biden calls it?

Certainly, Biden’s appointment of a new US ambassador to ASEAN — a position that has been vacant since 2017 — shows the US’s willingness to resume consistent engagement going forward and at least allows the US to start making up for lost time alongside other ASEAN ambassadors in Jakarta.

The intention to accelerate consultations to reach "Comprehensive Strategic Partnership" status with ASEAN is also positive, but almost a given since China already attained this status last year.

Washington still has an uphill climb. To begin with, the US’s much-vaunted Indo-Pacific Economic Framework for Prosperity (IPEF) is still skimpy on the details. The US has promised to look into enhancing cooperation in digital economies, resilient supply chains and clean energy, but ASEAN countries are still looking for market access.

In addition, some ASEAN countries will not be able to meet the stringent labour, tax, data privacy or anti-corruption standards of the IPEF. Singapore Prime Minister Lee Hsien Loong summed it up neatly: "Quite a number" of ASEAN countries are interested in the framework, but there is "not much substance" in terms of investment and trade. Examining it from a different vantage point, the framework has its "own value" and offers a "new start".

That fuller IPEF details are expected to be unveiled at the Quadrilateral Security Dialogue (Quad) meeting in Tokyo next week will accentuate regional concerns that Washington is using an extra-ASEAN entity to dictate terms to ASEAN, thus undermining its centrality.

It might be easy to adopt a shorthand and surmise that regional countries depend mostly on China for their economic prospects and on the US for their security. It is not so clear-cut.

Why is a tangible and substantial IPEF so important? Because in the great game of winning friends and influencing people, that is all that is left to play for between Washington and Beijing.

No one has a quibble with Uncle Sam as primus inter pares in the provision of security guarantees, but the US needs to catch up with China’s momentum in terms of its economic cooperation with the region.

Washington might have a problem with messaging. It might be easy to adopt a shorthand and surmise that regional countries depend mostly on China for their economic prospects and on the US for their security. It is not so clear-cut.

The US is the region’s top investor, whereas China is fourth, after the European Union and Hong Kong. The US is ASEAN’s second-biggest trading partner, just behind China, and runs a goods and services trade deficit with ASEAN (US$138.4 billion in 2020), making it a leading export market for Southeast Asia.

But China has not been sitting still. For years, Beijing has sought to construct a different narrative of its regional security capabilities.

Last month, Beijing proffered the Global Security Initiative (GSI), which will work in tandem with its Belt and Road Initiative. This is an evolution of Xi’s 2014 "Asia for Asians" initiative. Both denounce a "Cold War mentality" (read: the US’s power politics and "hegemony"), and the GSI calls for a "comprehensive, cooperative and sustainable" order.

What such an order entails is not exactly clear. To the concern of Canberra, Washington, and others, China has also reportedly established a security cooperation pact with the Solomon Islands that would allow Beijing to send police and security personnel to the islands to "assist in maintaining social order", and for PLA Navy ships to receive "logistical replenishment" there.

Southeast Asia is more acutely aware than ever that the US has its own interests and that regional partners will have to rely on themselves more and work together. If this sounds eerily similar to Mr Xi’s "Asia for Asians" concept, it is not a matter of happenstance.

Therein lies the rub. The US’s overarching "free and open" Indo-Pacific (FOIP) strategy is a double-edged sword. On the one hand, small nation-states in the region will theoretically support Washington’s stance on international norms such as the rule of law, freedom of the commons and connectivity. On the other hand, the Quad casts the region in a geopolitical framework, that is, managing the rise of China.

No Southeast Asian country would support the FOIP carte blanche. First, ASEAN has its own AOIP. Second, signing up to the US-led FOIP would be akin to waving a red flag at the Chinese bull.

In short, the US should just use economic and investment levers to gain traction in ASEAN. Uncle Sam might talk a good game about engaging Southeast Asia, but the region has sufficient experience to know not to take Washington’s declarations of support at face value.

For example, think the Afghanistan pullout in 2021, switching diplomatic recognition from Taiwan to Beijing in 1979, and Saigon in 1975.

Southeast Asia is more acutely aware than ever that the US has its own interests and that regional partners will have to rely on themselves more and work together. If this sounds eerily similar to Mr Xi’s "Asia for Asians" concept, it is not a matter of happenstance.

Related: ASEAN’s deft diplomacy with its dialogue partners | What to expect from the US-ASEAN Summit in Washington | Chinese companies see ASEAN as a bright spot for investment | China’s unified national market will benefit ASEAN in the long run | Apart from ASEAN and China, international community and law are part of South China Sea discourse